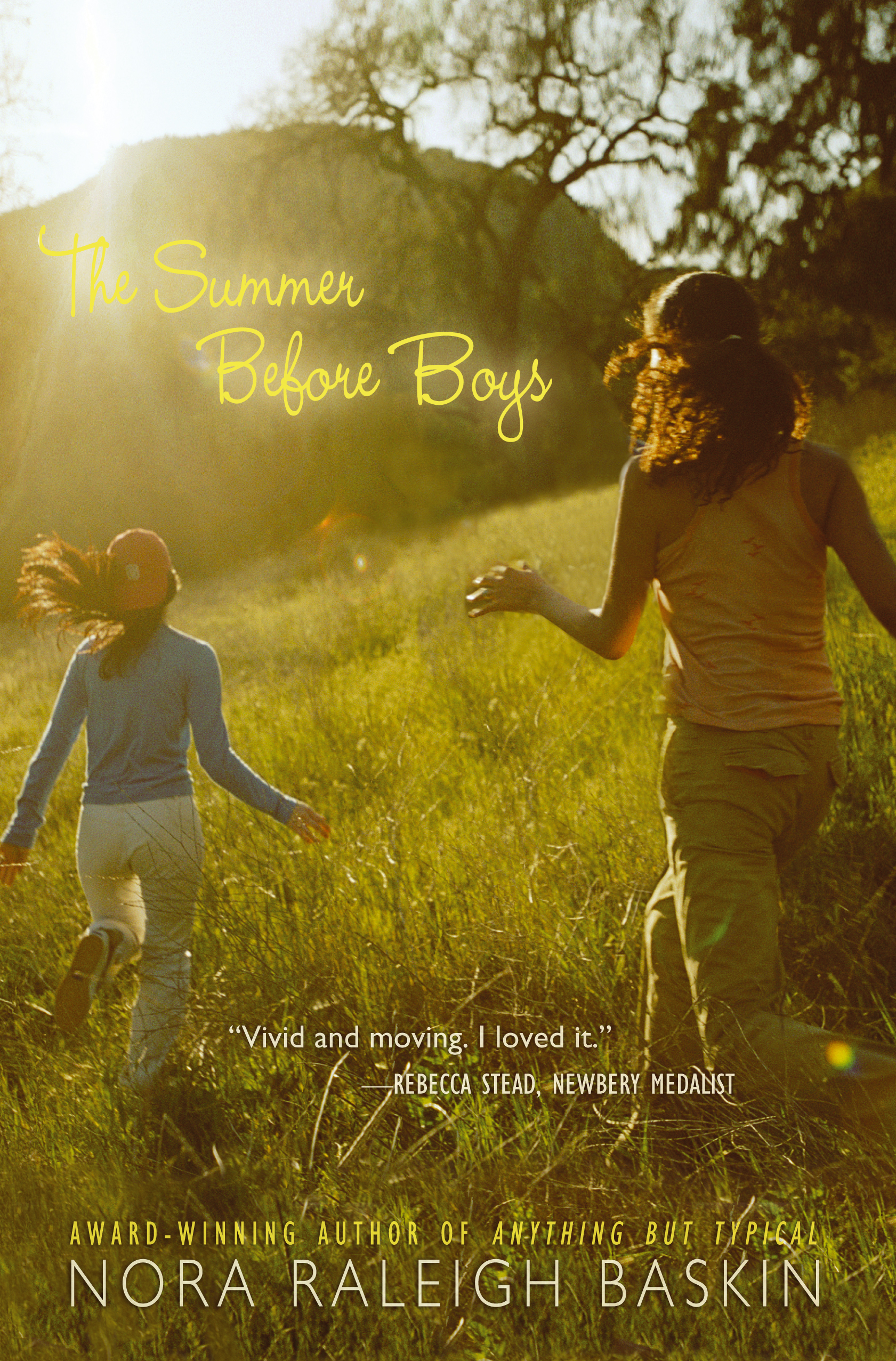 The Summer Before Boys

Julia and Eliza are best friends, spending the summer together. Julia's mother is serving in the National Guard and Julia spends all of her time trying not to think about what could happen. So the girls lose themselves in their summer, hanging out at the resort where Eliza's father works. But when they meet a new boy, neither one of them is prepared for what it does to their friendship.

Nora Raleigh Baskin delivers a poignant look at the way a first crush can come between best friends and the importance of hanging on to the time you have as a kid before rushing into growing up.

Summer Before Boys one
My Aunt Louisa, who is really my sister, snored like a machine with a broken part, a broken part that kept cycling around in a shuddering, sputtering rhythm.

“Whistle with me,” Eliza said into the dark.

We lay together in bed, in Eliza’s room that was really not a room, but a part of the den that had been sectioned off with a thin portable wall. Each night either Aunt Louisa, or Uncle Bruce, who is really my brother-in-law, pulled out “the wall,” like stretching an accordion as far as it would go. Then Eliza would yank her bed right out of the couch and we would both slip under the cool sheets and the thin cotton blanket.

The summer I spent living with Eliza, who is really my niece, but since we are both twelve years old that feels kind of stupid. So we just tell everyone we are cousins.

And it was the summer before boys.

“If you whistle, she stops snoring,” Eliza told me.

Mostly Eliza was my best friend. We both went to New Hope Middle School, but I lived in town, on Main Street. And Eliza lived way up here, right at the base of the Cayuga Mountain, right at the gatehouse entrance to the Mohawk Mountain Lodge. She lived at the foot of a magical place and now I got to live there too. For the whole summer.

Because my dad, who is technically Eliza’s grandfather, had to work.

And so there was no one home to watch me.

And because my mom got deployed to Iraq nine and a half months ago.

Eliza whistled one long, clear, unwavering note. It floated out of the perfect circle she made with her lips and into the air. Her whistle slipped right under “the wall” that didn’t quite touch the floor, or the ceiling, so that Eliza’s room was lit with flickering gray light from the television set left on all night. Her whistle carried through the den and into Aunt Louisa and Uncle Bruce’s bedroom.

“For a little while.”

I poked my feet out of the bottom of our sheet and thin white cotton blanket, careful not to pull the covers from Eliza.

Eliza was already standing beside the bed, her bare feet on the wood floor. “Then let’s go outside,” she whispered to me.

Her white nightgown wrinkled and clung to her thighs—it was so sticky out—her scabby summer knees were showing. Her hair was sleepy, pulled from its ponytail so it poufed up around the back of her head and glowed like a halo in the unnatural light from the TV.

And we ran. I ran. Past the TV, past the bedroom door, into the kitchen and right onto the big crack in linoleum that pinched my big toe.

We ran until we were flying.

Light elves, higher with each leap—onto the wet grass, into the hot summer night. We were the fairies that lived in the woods beyond the yard, hidden under the fallen trees, making homes of the leaves and twigs. Growing wings of glistening, glowing gossamer, as we felt ourselves lifted from the ground.

“Look at me,” Eliza said. She lifted her arms and twirled around. She threw back her head. The bottom of her nightgown unstuck from her legs and spun out around her.

“Look at me,” I said. And when I looked up I saw the sky, dotted with sparkling stars and a sliver of the moon that looked like someone had tried to erase it but couldn’t quite get it all. I arched my neck and turned around and around in place.

We spun until we couldn’t stand up and we both fell together, down the hill where Uncle Bruce parked his truck, and we lay there at the edge of the lawn to catch our breath. I was wearing a white nightgown identical to Eliza’s—worn and pilled. I picked off pieces of grass, one by one—looking so closely—and I could barely make out the faded kittens and puppies in the fabric. Little pink kittens and little blue puppies, when this nightgown must have been brand-new.

I wondered if Aunt Louisa had bought it, if she had bought two, thinking of me, one day, spending nights at her house. Had she ever thought her father would have another little girl, twenty-two years after she was born, with another wife who became another mother? Or maybe it was just another hand-me-down from a whole other mother to another little girl altogether that Aunt Louisa picked up from Goodwill when she found out I would be staying here for the summer.

“Tomorrow we can go up to the hotel,” Eliza said. “It’s check-in day. There’ll be a lot of people driving up. But Roger will pick us up for sure, if he sees us walking.”

“Oh, right.” I liked to pretend I belonged there too.

The mosquitoes began to smell our sweat, found our skin, and feasted. I scratched at my ankles and my left elbow and my forehead, but I didn’t want to go in. I wanted to keep looking at the moon, to memorize it and fill in the empty space.

What time is it?

Of course, I knew what time it was.

I always knew what time it was.

I know what time it is.

My mother was probably getting up and making her bunk. And maybe eating breakfast already. She tells me she hates the powdered eggs, but they are okay with lots of ketchup.

She can’t see the moon at all anymore. The sun is shining now where she is and I think that right at this very second she might be thinking of me. And I wonder if she is as worried about her forgetting my face as I am about forgetting hers.

Nora Raleigh Baskin is the ALA Schneider Family Book Award–winning author of Anything But Typical. She was chosen as a Publishers Weekly Flying Start for her novel What Every Girl (Except Me) Knows, and has since written a number of novels for middle graders and teens, including The Truth About My Bat Mitzvah, The Summer Before Boys, and Ruby on the Outside. Nora lives with her family in Connecticut. Visit her at NoraBaskin.com.

"A vivid and moving story about traveling the road between childhood and what comes next. I loved it."
--Rebecca Stead, Newbery Medal-winning author of WHEN YOU REACH ME

“Perfectly captures the way a girl’s life can be suspended between the last days of childhood and the glimmerings of her first crush. The Summer Before Boys is a novel of great depth and tenderness.”
--Frances O’Roark Dowell, award-winning author of THE SECRET LANGUAGE OF GIRLS

"An extraordinary novel explores the challenges faced by children whose parents have gone off to war.
. . . Baskin adeptly portrays Julia’s ambivalence and anxiety in this thoughtful tale that artfully brings the war to the homefront." - KIRKUS, April 15, 2011, *STAR

"Baskin perfectly captures friendship among girls on the edge of puberty, especially the way big dramas work out in small moments. . . . A poignant story of children on the homefront and the ways that a first love can break up longtime friendships and change things forever."
--Booklist, March 1, 2011

"Baskin covers this emotional territory with respect and honesty, allowing readers to see themselves in these complicated, yet likable, girls."
--The Horn Book Magazine

It is a rare story for kids of this age that treats such matters with straight-forwardness and without mushy and ridiculously high hormonal responses. This is not Twilight; it's a gentle story about two long-time friends and how they figure out who they are when one of them starts to see boys in a new light. There is a big adventure at the end, which ends up better than you would have thought when it started. There is no salacious gossipy junk to muddle up the story. Instead, Baskin writes real-life characters that kids will relate to, especially girls, and gives them a story they will take to heart because most readers will know that this is going to happen to them (or perhaps already has). It's a nice story about a normal part of the growing-up process, and readers and parents will appreciate Baskin's gentle but pointed storytelling techniques.

THE SUMMER BEFORE BOYS is highly recommended for a tween's bookshelf --- right alongside all those books about your changing body and relationships. There is no AAA map to guide one through the craziness of puberty, but books such as these and protagonists like Julia and Eliza will surely cast some helpful glow on the proceedings.

A Teacher's Guide to The Summer Before Boys (pdf)

The Summer Before Boys