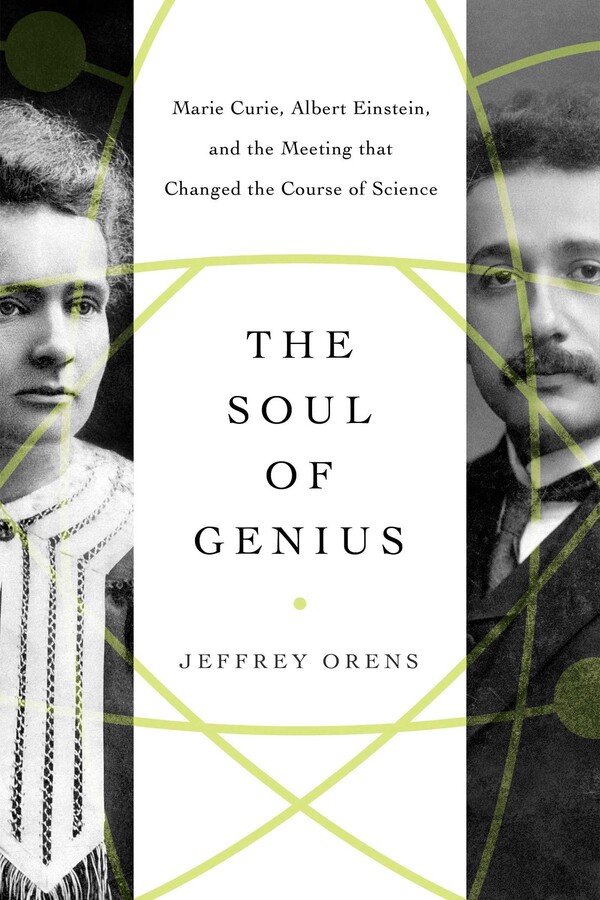 A prismatic look at the meeting of Marie Curie and Albert Einstein and the impact these two pillars of science had on the world of physics, which was in turmoil.

In 1911, some of the greatest minds in science convened at the First Solvay Conference in Physics, a meeting like no other.  Almost half of the attendees had won or would go on to win the Nobel Prize.  Over the course of those few days, these minds began to realize that classical physics was about to give way to quantum theory, a seismic shift in our history and how we understand not just our world, but the universe.

At the center of this meeting were Marie Curie and a young Albert Einstein.  In the years preceding, Curie had faced the death of her husband and soul mate, Pierre.  She was on the cusp of being awarded her second Nobel Prize, but scandal erupted all around her when the French press revealed that she was having an affair with a fellow scientist, Paul Langevin.

The subject of vicious misogynist and xenophobic attacks in the French press, Curie found herself in a storm that threatened her scientific legacy.

Albert Einstein proved a supporter in her travails. They had an instant connection at Solvay.  He was young and already showing flourishes of his enormous genius. Curie had been responsible for one of the greatest discoveries in modern science (radioactivity) but still faced resistance and scorn.  Einstein recognized this grave injustice, and their mutual admiration and respect, borne out of this, their first meeting, would go on to serve them in their paths forward to making history.

Curie and Einstein come alive as the complex people they were in the pages of The Soul of Genius.  Utilizing never before seen correspondance and notes, Jeffrey Orens reveals the human side of these brilliant scientists, one who pushed boundaries and demanded equality in a man’s world, no matter the cost, and the other, who was destined to become synonymous with genius.

Jeffrey Orens is a former chemical engineer and business executive with Solvay Chemical who has written for several history publications and has an exceptional eye for overlooked gems in history.  He lives in Fairfield, New Jersey.

“Orens’s approach to the lives and works of the attendees, through the story of this conference, is unusual and well-conceived.  The Soul of Genius revisits what is certainly one of the most exciting, turbulent periods in the history of science and better acquaints us with people who played significant roles in this drama."

"Einstein's often-forgotten links to the empirically minded Marie Curie receive highly illuminating scrutiny from a researcher affiliated with the Solvay Institutes, sponsor of the 1911 conference in Brussels that brought these two brilliant minds together. Readers share in the intellectual ferment of this singular conference, and Orens recounts how these two pioneers won each other’s admiration for their complementary roles in forging a twentieth-century physics. The narrative teaches readers a great deal about the scientific research of Einstein and Curie; however, it also probes the tangled romantic lives of both scientists. A compellingportrait of two geniuses, remarkable for their conceptual daring and emotional complexity."

“Imagine you could gather the world’s most brilliant minds to debate the fundamental nature of reality – this was the opportunity seized a century ago by the Belgian industrialist Ernest Solvay, wrangling Albert Einstein, Marie Curie, and a mountain of Nobel Prize winners to solve the mysteries of quantum physics. The Soul of Genius takes us through these epochal Solvay Conferences, focusing on the scientific ideas and personal lives of Curie and Einstein. In compelling stories, we see how they changed the world against a backdrop featuring the Mona Lisa, a fair bit of swordplay, and a world war. A marvelous tale of how science actually works.”

“The Soul of Genius is the engaging story of science at a crossroads, a telling of how the world was transformed from the long-held ideas of Newton to those of Einstein and Curie that define modern physics.  Deeply researched and masterfully told, The Soul of Genius is a ground-breaking book that delves deep into the story of how an ‘assembly of genius’ led to how we perceive the physical world today.”

– John Dvorak, author of The Last Volcano and Mask of the Sun

“Jeffery Orens’ insightful work exploits the Age of Information as a marvelous time for deep research, uncovered details, unexpected cross-connections, and scandalous gossip.  The Soul of Genius is a new examination of how the Solvay Conferences of Physics, beginning in 1911, brought together people who would turn science upside down and change our view of reality.  Two participants, Marie Curie and Albert Einstein, were key influencers in this revolution, and Orens’ analysis of their collision at Solvay is thorough and revealing.  Read all about it, and soak yourself in the details.”

“A dual biography of ‘the two brilliant individuals who have made the greatest impression on people across the world when they think of science’…and the iconic first 1911 Solvay Conference in Brussels.  Einstein and Curie met [at this conference] and remained friends. [Einstein’s] groundbreaking discovery at the birth of quantum mechanics…was among the first proven phenomena to contradict Newton’s laws and scientists are still trying to reconcile these quantum effects and classical physics. Fiercely dedicated, ambitious, and workaholic, Curie overcame poverty and the almost universal prejudice against educated women to became the first internationally famous woman scientist.   The Soul of Genius is a good read and introduction to two of the 20th century’s greatest geniuses.”

“Toward the end of his life, when asked which physicist he most respected, Albert Einstein replied ‘Hendrik Lorentz and Marie Curie.’ At the momentous inaugural Solvay conference,Einstein, the meeting’s youngest participant, was dazzled by the ‘sparkling intelligence’ of Curie, and she was impressed with him, too, and soon afterward gave him a glowing reference that helped to secure his first professorship.  Vivid.  [Upon Curie’s death,] Einstein’s tribute to her life gives some of the most compelling evidence of the closeness of their friendship and the depth of his admiration for her. A rewarding read.”

“Curie’s first Nobel Prize had been for the physics of radioactivity; her second would be for the chemistry of radium. It coincided with a further crisis that forms a major part of Jeffrey Orens’s The Soul of Genius, [along with] the historic conference that is the central event of Oren’s book. The The First Solvay Conference has gone down as a landmark event, the start of a series that continues to the present day. The story of Curie’s love affair had broken just as the conference was ending. Then, only a few days later, came the announcement that Marie was to be awarded the Nobel Prize for chemistry. She was at the eye of a media storm. Curie was due to receive her second Nobel the following month, and the committee was nervous. Curie replied, ‘I consider that there is no relation between my scientific work and the facts of private life.’ On Dec. 10, she went to Stockholm and received her award. By the end of the month she was seriously ill and in a hospital. ‘She had paid a tremendous cost for being a woman of principle,’ Mr. Orens writes. ‘It was a price that would never be fully recovered.’”