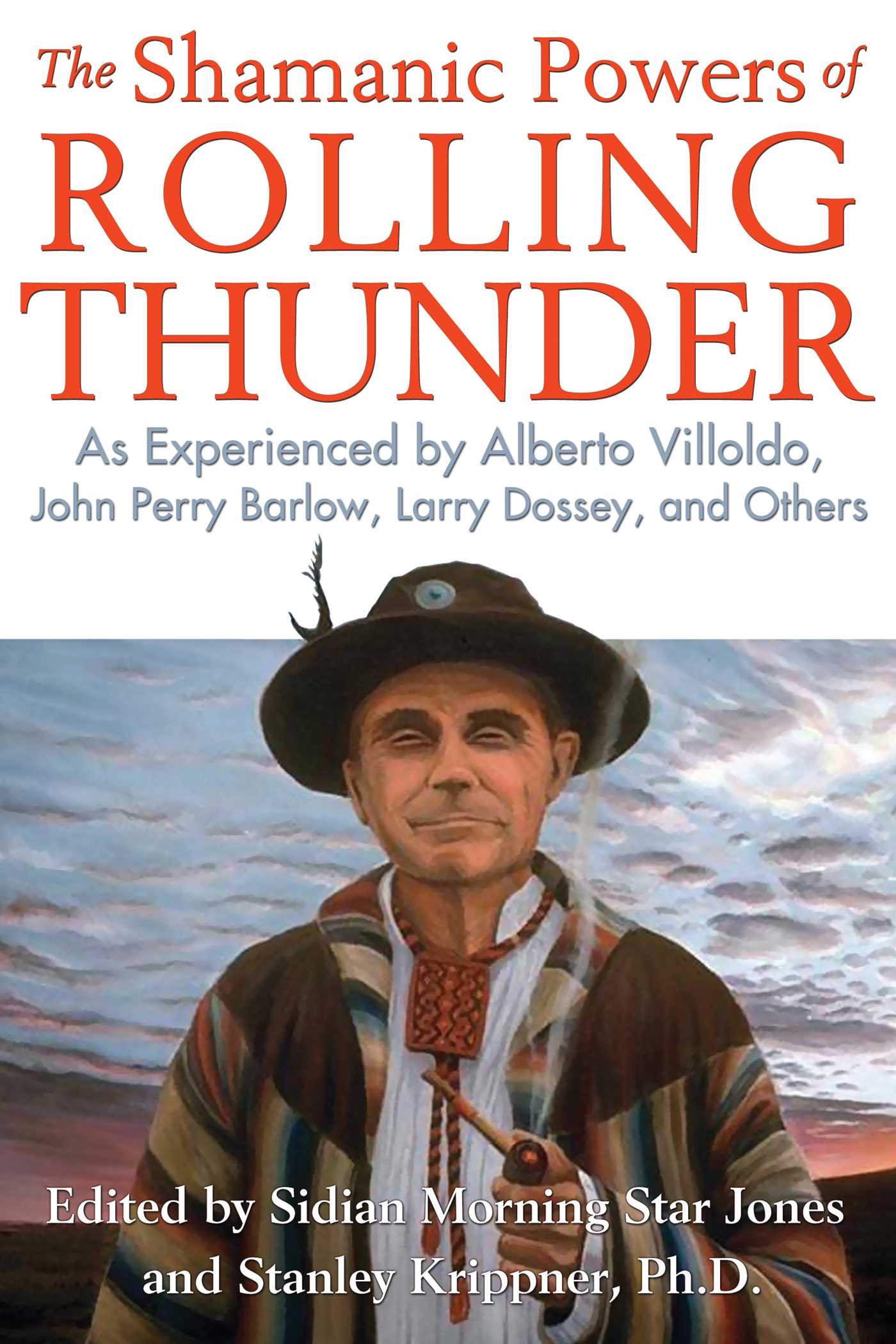 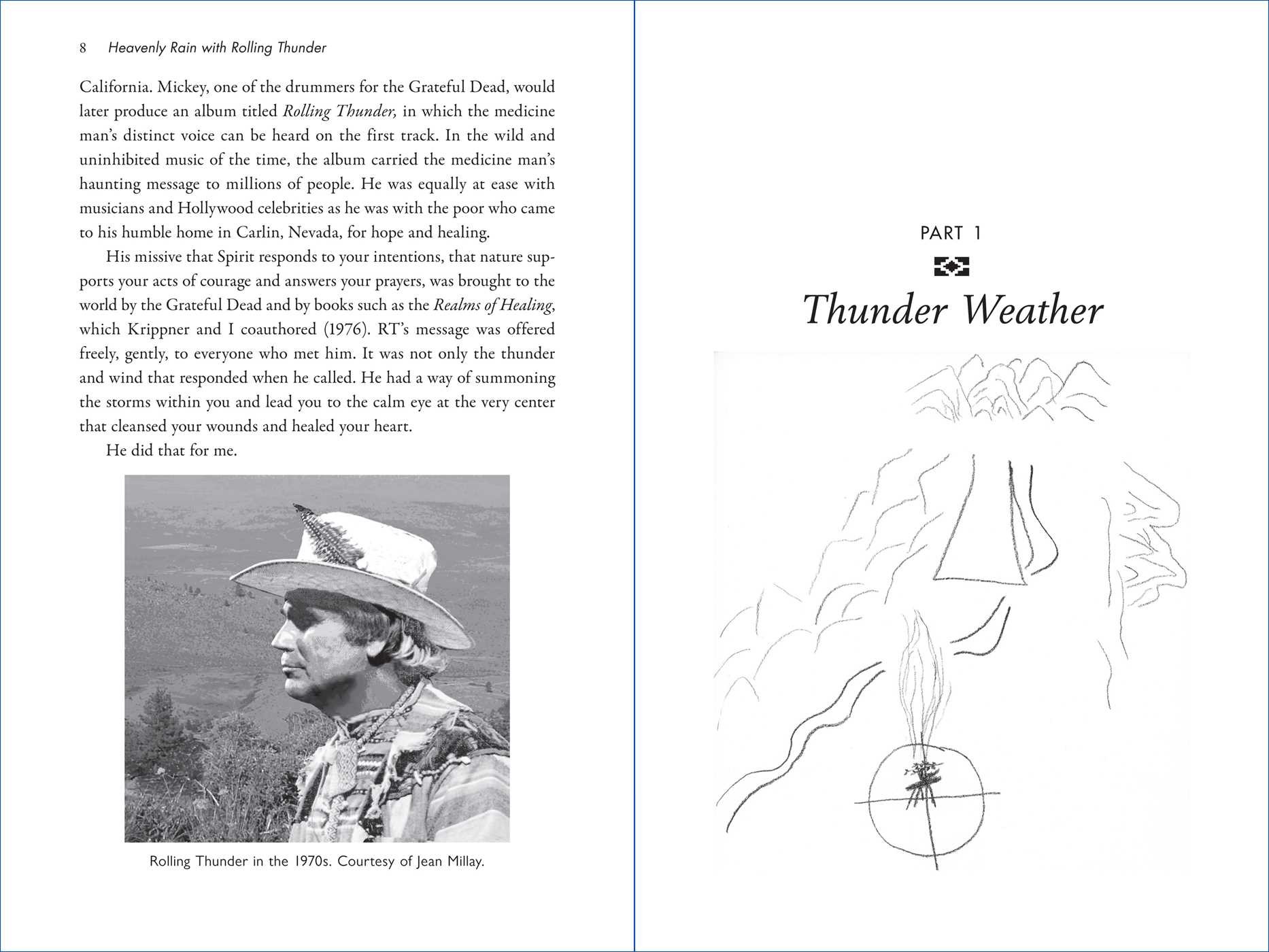 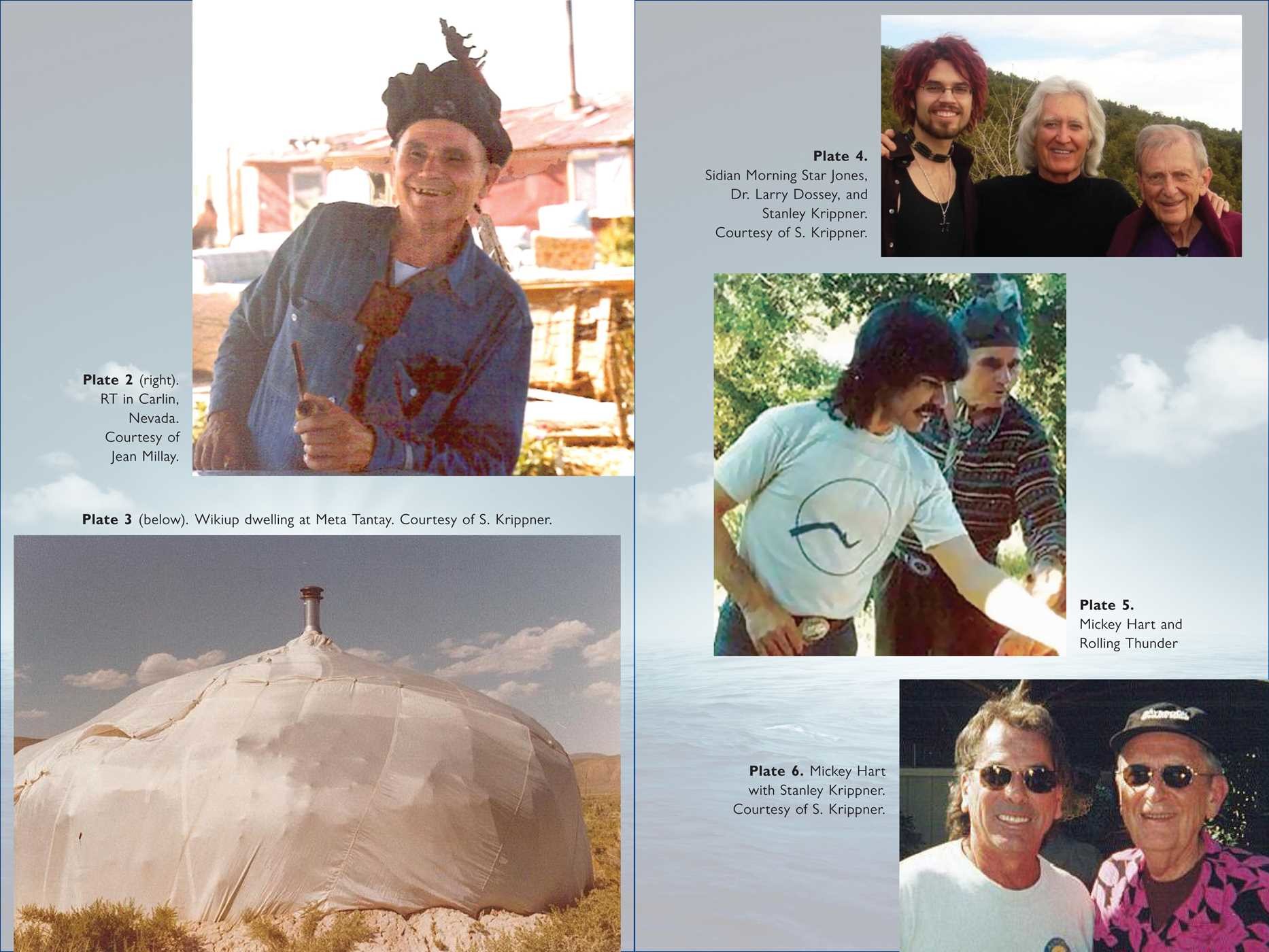 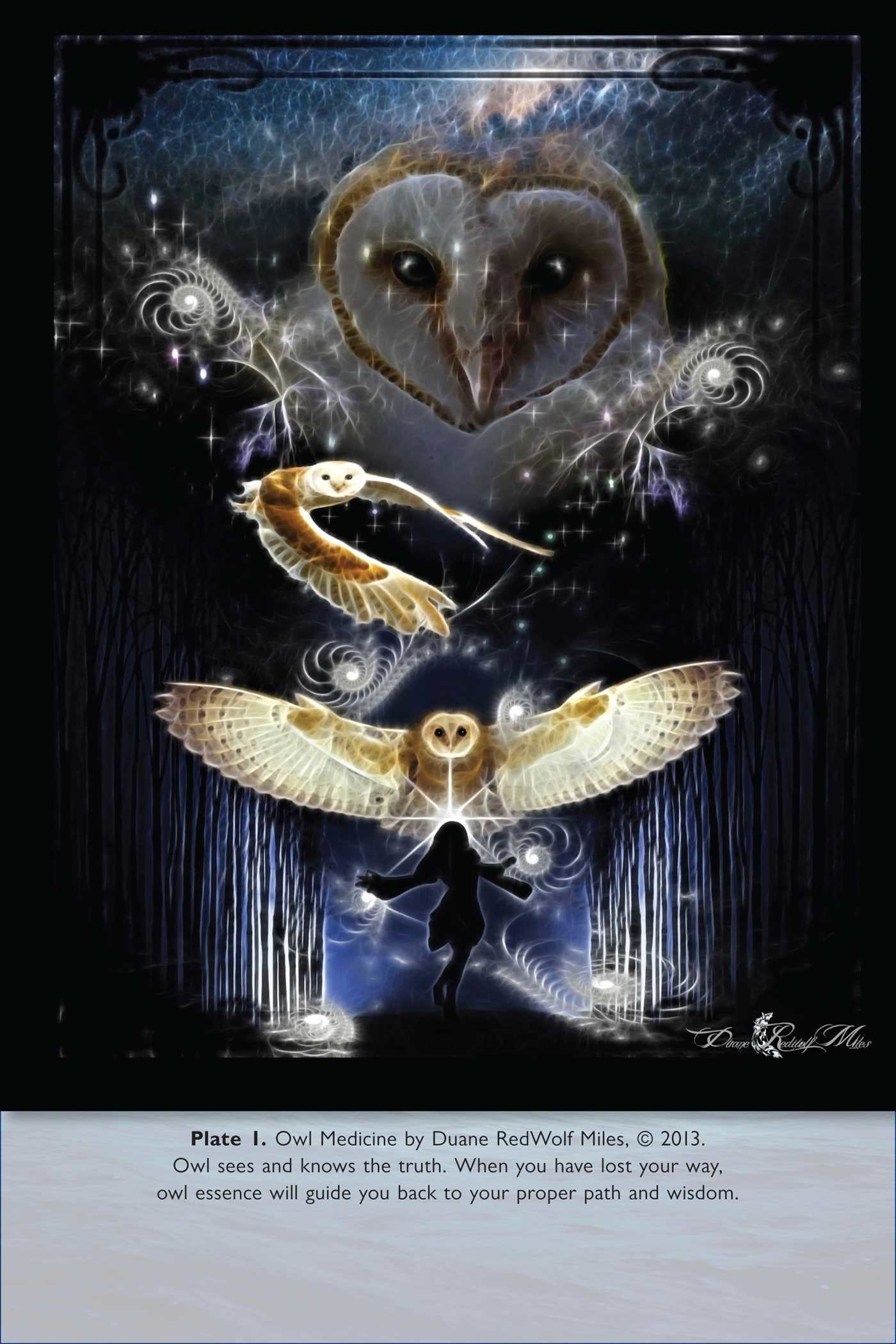 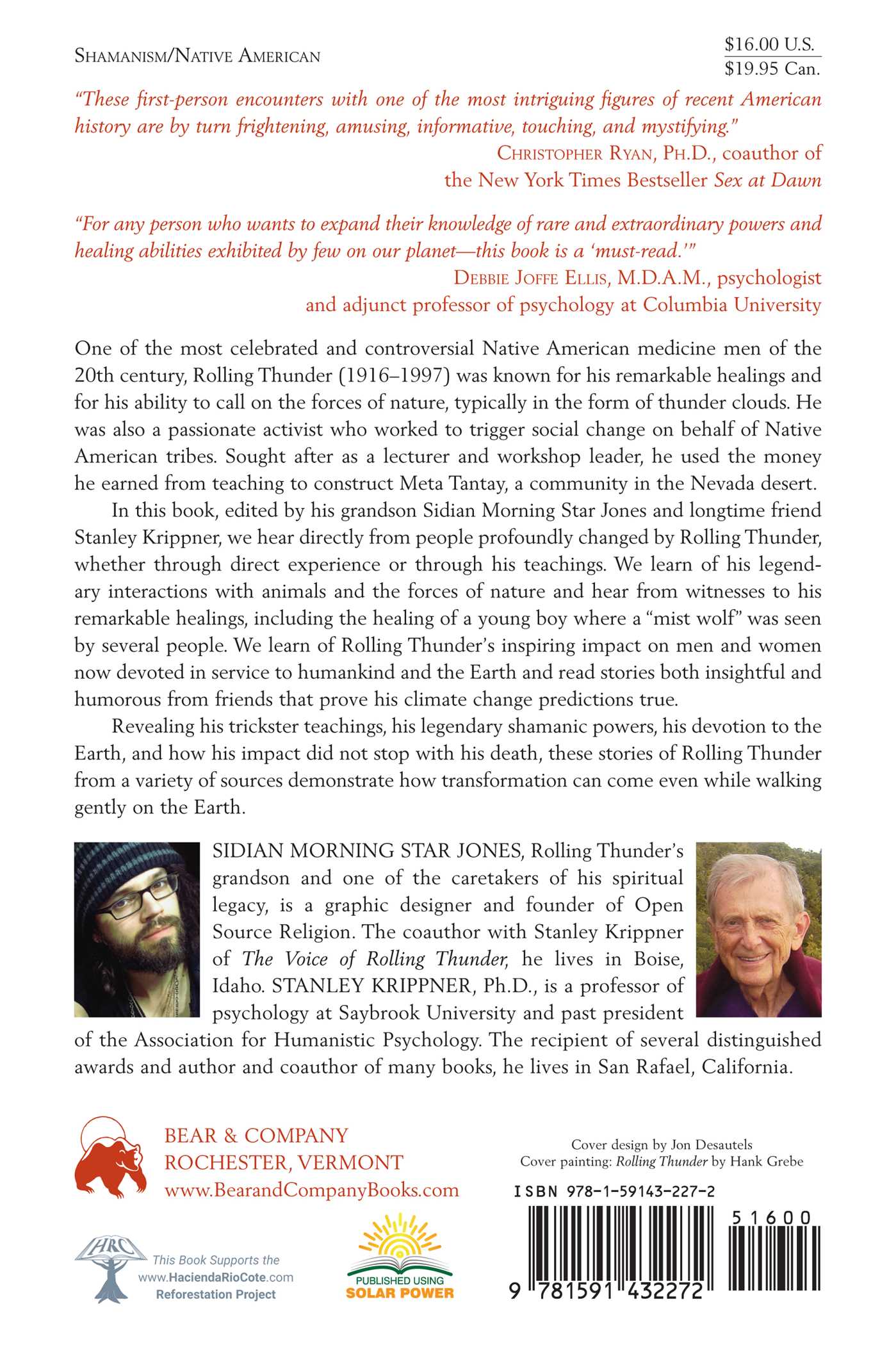 The Shamanic Powers of Rolling Thunder

As Experienced by Alberto Villoldo, John Perry Barlow, Larry Dossey, and Others

One of the most celebrated and controversial Native American medicine men of the 20th century, Rolling Thunder (1916-1997) was known for his remarkable healings and for his ability to call on the forces of Nature, typically in the form of thunder clouds. He was also a passionate activist who worked to trigger social change on behalf of Native American tribes. Sought after as a lecturer and workshop leader, he used the money he earned from teaching to construct Meta Tantay, a community in the Nevada desert.

In this book, edited by his grandson Sidian Morning Star Jones and longtime friend Stanley Krippner, we hear directly from people profoundly changed by Rolling Thunder, whether through direct experience or through his teachings. We learn of his legendary interactions with animals and the forces of Nature and hear from witnesses to his remarkable healings, including the healing of a young boy where a “mist wolf” was seen by several people. We learn of Rolling Thunder’s inspiring impact on men and women now devoted in service to humankind and the Earth and read stories both insightful and humorous from friends that prove his climate change predictions true.

Revealing his trickster teachings, his legendary shamanic powers, his devotion to the Earth, and how his impact did not stop with his death, these stories of Rolling Thunder from a variety of sources demonstrate how transformation can come even while walking gently on the Earth.

Alberto Villoldo, Ph.D., is a medical anthropologist who has studied the healing practices of Amazonian and Andean shamans. Villoldo directs the Four Winds Society, where he trains individuals in the U.S. and Europe in the practice of shamanic energy medicine. He is the founder of the Light Body School--which has campuses in New York, California, and Germany, where he trains practitioners in energy medicine--and is the author of numerous books including Shaman, Healer, Sage; The Four Insights; Courageous Dreaming; and Power Up Your Brain. We wrote him at his home in Chile, asking how RT had impacted his life. This is his reply.

It had not rained for weeks. This is how it is in the desert in northern Nevada. A few sporadic rains in the wet season, and then parching heat for months. We had been in ceremony with Rolling Thunder for three days. That night we drove to the desert, far from the city lights and power lines to a sandy flat surrounded by clipped dunes, the place for our fire ceremony. Already about forty of us, whites and Indians, had gathered to pray and gaze quietly at the stars in the cloudless night. A bit later RT, as we called him when he was not watching, pulled up in a beat up pick-up truck. The Shoshone medicine man stepped out of the cab, adjusted the straw hat that never seemed to leave his head, and strode to the circle.

As one of his helpers lit the fire, RT explained that we were going to do a serpent dance, circling the flames slowly, releasing with each round the lifelessness inside each one of us--the way the serpent sheds her skin.

“All at once,” he said. “Not like white people like to do, one scale at a time, so they can feel something.” I could imagine him grinning under the starlight, chewing on his pipe.

I thought we had already done this two days earlier, when he led us in an all-night sweat lodge. I had a bad sunburn and was literally peeling off my skin as we spent hours sweating and singing.

But he meant the other skin, the one we wear over our hearts, the carefully crafted personas, the face we “keep in a jar by the door,” as the Beatles said.

We danced into the night, circling the fire, with each revolution shedding a little of the past that festered within us like an old sore that would not heal. With each song we became less “civilized,” less invested in the ways of the city, and reclaimed our aboriginal souls. As we danced the way our ancestors had done for millennia, we slowly discovered we are all children of this earth.

The serpent has gotten a bad rap in the West. But for the medicine man the serpent was the primeval life force, sensuality and earthiness. Like so many ancient cultures, RT considered the serpent sacred. Its power and medicine allows us to heal ourselves and others. Perhaps this is why even in the West it is a symbol of healing in the caduceus of medicine.

When we were done I felt lighter than I had in years.

“It’s customary after a dance to have a brief shower to erase our footprints,” the old Indian explained. “Just so the white man does not think a bunch of savages have been out dancing and drinkin’ and howling at the stars . . .”

And then the seemingly impossible happened. A light drizzle began, but there was not a single cloud in the sky. And then a full-blown rainstorm, so that all of us were drenched as we ran to our vehicles.

When we returned to camp, I looked at Stanley Krippner, my professor at the time, wondering if I had dreamt the whole scene with the rain. Yet he was as soaked as I was. That’s when I realized that the weather responded to Rolling Thunder, and I understood how he got his name.

RT would speak about the white man the way a father speaks about a wayward child. He had no bitterness, although the European settlers had taken his people’s land and relocated his ancestors to disease-ridden reservations. He could see the folly of the ways of the Europeans, how greed and lust for power drove them even to spoil the earth on which they live. No other creature fouls its own nest the way we do.

Someday we will all have to explain our actions to the Great Spirit, and our brief stint on earth will be weighed on the scale of divine justice. Or so I remember RT saying. He explained that this is why it is important that we use our medicine, our gifts, for good. That we touch everyone with a blessing. That we bring beauty to the world every chance we get.

His message did not remain confined to the reservation. Many of us were touched by the audacity of a brakeman for the railroad who was a master healer and medicine man, a poor Indian who dared to have a dream bigger than himself, or than his own people or his era. Even in the nightmare of that moment in history, with the growing oppression of indigenous peoples around the globe, he held fast to the dream of a world-that-could-be.

RT would occasionally visit Mickey Hart’s Ranch in Novato, California. Mickey, one of the drummers for the Grateful Dead, would later produce an album titled Rolling Thunder, in which the medicine man’s distinct voice can be heard on the first track. In the wild and uninhibited music of the time, the album carried the medicine man’s haunting message to millions of people. He was equally at ease with musicians and Hollywood celebrities as he was with the poor who came to his humble home in Carlin, Nevada, for hope and healing.

His missive that Spirit responds to your intentions, that nature supports your acts of courage and answers your prayers, was brought to the world by the Grateful Dead and by books such as the Realms of Healing, which Krippner and I coauthored (1976). RT’s message was offered freely, gently, to everyone who met him. It was not only the thunder and wind that responded when he called. He had a way of summoning the storms within you and lead you to the calm eye at the very center that cleansed your wounds and healed your heart.

He did that for me.

“These first-person encounters with one of the most intriguing figures of recent American history are by turn frightening, amusing, informative, touching, and mystifying. Rolling Thunder’s healing and wisdom were sought after by characters as diverse as members of the Grateful Dead, Muhammed Ali, and Buckminster Fuller. The authors have done us all a huge service by collecting these extraordinary accounts of a remarkable man.”

“For any person who wants to expand their knowledge of rare and extraordinary powers and healing abilities exhibited by few on our planet and to learn of the remarkable Rolling Thunder’s adept expression and application of such abilities--this book is a ‘mustread.’ Jaw-dropping awe and wonder will be a common response from many! And what a privilege to be reading compelling firsthand accounts by individuals who, each in their own right, contribute greatly to the education, upliftment, and enlightenment of many.”

“More than four decades have now passed since I first heard Rolling Thunder speak at a symposium in San Francisco sponsored by the Association for Humanistic Psychology. I have no doubt that Rolling Thunder’s presence at this gathering of open-minded academics and therapists had been facilitated by Stanley Krippner. So, it is both fascinating and heartening to see that, so many decades later, Krippner and his fellow consciousness explorers are still grappling with the spiritual mysteries, social implications, and theoretical dilemmas that have followed in the wake of Rolling Thunder’s brilliant career as a Native American shaman. This book exhibits a depth of understanding beyond that of previous treatments. I highly recommend it.”

“The legendary Native American shaman Rolling Thunder captured the imagination of musicians, writers, and artists during his lifetime, and his legacy continues to inspire and captivate readers from all walks of life. . . . [a] fascinating retrospective look at a uniquely iconic medicine man. Simply put, you’re in for a treat. Tune in, turn on, and read The Shamanic Powers of Rolling Thunder.”

“Krippner and Jones have assembled a fascinating and inspiring tribute to Rolling Thunder. To be ‘a living prayer’ is what The White Buffalo Calf Woman of the Lakotas brought to all people. Rolling Thunder lived this truth, and the elements of nature responded in kind as so many people recount herein. His legacy reminds us all that each human’s capacity and purpose, is to ‘shamanize,’ to be a co-creator.”

“An essential companion volume to The Voice of Rolling Thunder for anyone wanting to understand his life, the lives of those he touched, and the variety of disciplines he influenced.”

“Eloquently demonstrates how Rolling Thunder used his knowledge [of animal powers and the seeded earth] in his healing magic and possessed an ‘eagle’s eye’ that guided him on his shamanic journeys.”

The Shamanic Powers of Rolling Thunder

As Experienced by Alberto Villoldo, John Perry Barlow, Larry Dossey, and Others