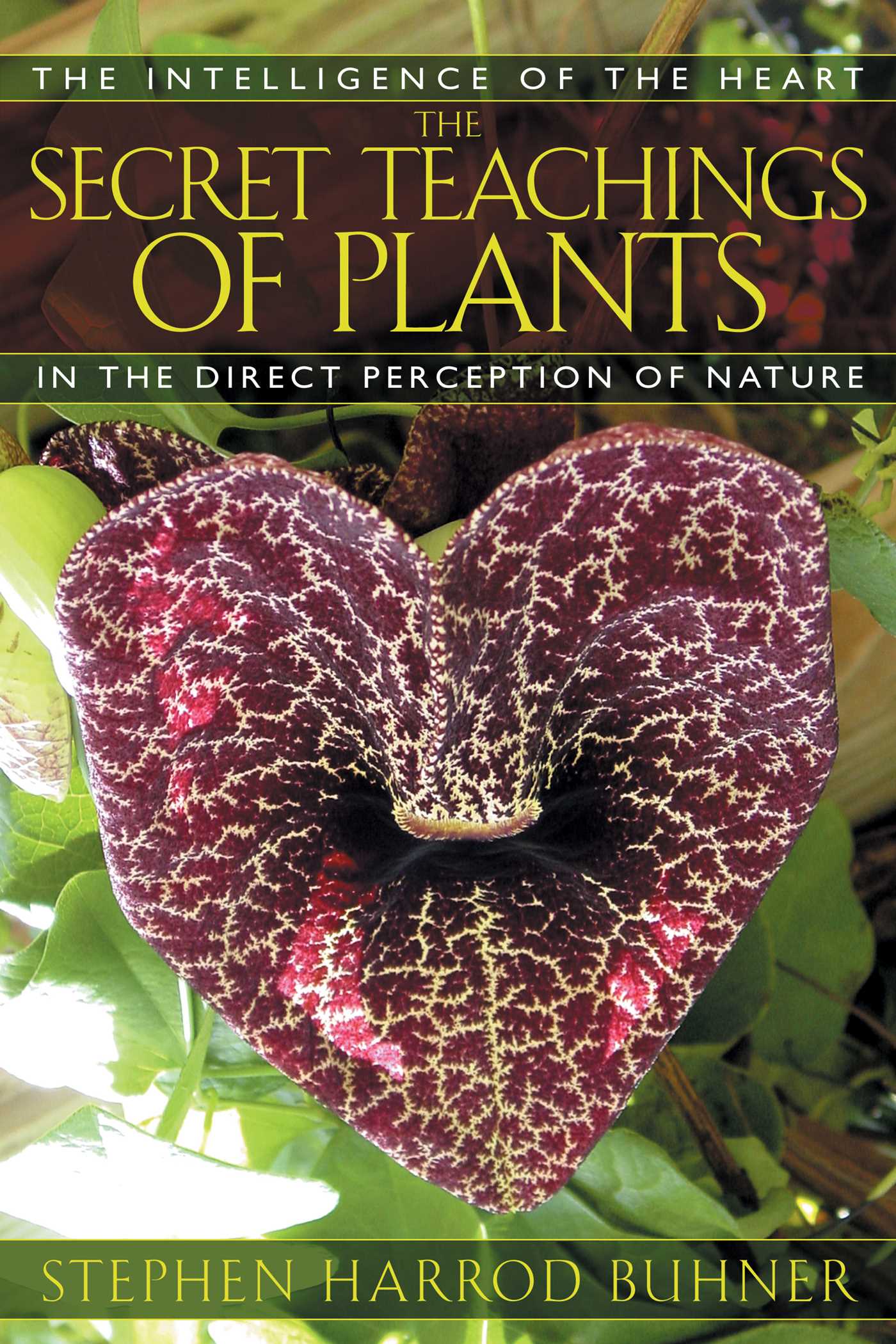 Reveals the use of direct perception in understanding Nature, medicinal plants, and the healing of human disease

• Explores the techniques used by indigenous and Western peoples to learn directly from the plants themselves, including those of Henry David Thoreau, Goethe, and Masanobu Fukuoka, author of The One Straw Revolution

All ancient and indigenous peoples insisted their knowledge of plant medicines came from the plants themselves and not through trial-and-error experimentation. Less well known is that many Western peoples made this same assertion. There are, in fact, two modes of cognition available to all human beings--the brain-based linear and the heart-based holistic. The heart-centered mode of perception can be exceptionally accurate and detailed in its information gathering capacities if, as indigenous and ancient peoples asserted, the heart’s ability as an organ of perception is developed.
Author Stephen Harrod Buhner explores this second mode of perception in great detail through the work of numerous remarkable people, from Luther Burbank, who cultivated the majority of food plants we now take for granted, to the great German poet and scientist Goethe and his studies of the metamorphosis of plants. Buhner explores the commonalities among these individuals in their approach to learning from the plant world and outlines the specific steps involved. Readers will gain the tools necessary to gather information directly from the heart of Nature, to directly learn the medicinal uses of plants, to engage in diagnosis of disease, and to understand the soul-making process that such deep connection with the world engenders.

We in the West have been immersed in a particular mode of cognition the past hundred years, a mode defined by its linearity, it tendency to reductionism, and an insistence on the mechanical nature of Nature. This mode of cognition, the verbal/intellectual/ analytical (VIA), is now the dominant one in Western culture.

There is, however, another mode of cognition, one our species has used during the majority of its time on this planet--the holistic/ intuitive/ depth (HID) mode of cognition. Its expression can be seen in how ancient and indigenous peoples gathered their knowledge about the world in which they lived and how they gathered knowledge of the uses of plants as medicines.

All ancient and indigenous peoples said that they learned the uses of plants as medicines from the plants themselves. For, they insisted, the plants can speak to human beings if only human beings will listen and respond to them in the proper state of mind. Gathering of knowledge directly from the wildness of the world is called biognosis--meaning “knowledge from life”--and, because it is inherent in our very physical bodies, it is something that everyone has the capacity to develop. It is something, in fact, that all of us use (at least minimally) without awareness in our day-to-day lives. It is a way of being that is concerned with our interconnection to the web of life that surrounds us, with wholeness rather than parts, with the very human journey in which we are all engaged.

Prologue to Part Two
The woman who had come to see me was tentative at the door, hesitant. Her eyes were nervous, quick, lines of worry surrounding them. She eddied in the door like a wisp of smoke, whispered across the room, and hovered lightly in the chair. She was forty-five years old, short, thin and wiry. Her skin was pale, washed out, hair a brown, not-flowing shadow of life. Just there.

She had come because she could not breathe. She had asthma.

She began telling me her life in many languages. In words. In the small flutterings of her hands. In intonations, the rise and fall of her voice as she spoke. In the slight shifts of her body, in the tiny patterns of emotion that crossed her face.

Her asthma had come on suddenly with no prior history. It had been almost twenty years now. Her medications were many, expensive. Laden with side effects.

I responded to her gesturings of communication. Talked with part of my mind

hearing her speak of her life

while another part looked deeper, seeking the path the disease had taken in her. Searching for traces of its truth.

Her chest caught my attention, standing forth of its own accord. Beckoning.

My attention centered there and I breathed into it, letting my awareness move deeper, touching its shape. Feeling my way. I felt an overwhelming urge to cry. And then my chest began to feel tight. The muscles clenched, closed down. I began to hunch over slightly, curl around myself. My chest hollowed and I began to breathe high up, rapidly, in small quick bursts, my breathing a tiny bird, fluttering against the walls of my chest.

I began to feel afraid then, slightly hysterical.

I calmed myself, breathed more deeply. Sat back in my chair. Felt a wave of relaxation flow through my muscles. Slowly, one-by-one they unclenched.

I saw her sink more deeply into the chair, her muscles beginning to relax. Her skin tone was changing, the muscles and skin itself softening. Her face relaxed. And she took a deep breath. There was a slight wheezing sound. Then she took another, and deeper, breath. Her chest began to open up slightly, the muscles letting go. . . .

My attention focused on the lungs, my seeing alive to every part that had been revealed to me. I reached into her lungs with my caring then. Directed the living, feeling field of my heart to hold them, envelop them. My caring moved deeply within her lungs, interweaving with their tissues, holding them, all of us now suspended in a living moment of time. Then, still holding them, still present with them, I turned a part of my attention at a slight angle, sent it out into the world. Sent out a request for help, a prayer from my deepest being, my earnest need flowing out through this channel I had opened into the world. At the same time I kept a living channel open through me into the living reality of her lungs. . . .

I felt that living communication flowing from us going out, its field spreading wide, touching the living reality of the world. I felt the living intelligence there, deeply embedded in its own work, its own living. Then as it felt my touch upon it, and seeing that my appeal was genuine, it quickened, awakened, and turned toward me and saw. A living flow of energy came back through the channel I had opened between us. A deep caring and loving, coming from the wildness of the world. . . .

And into my mind flashed an image of skunk cabbage as I had seen it last. Standing powerful and green, luminescent in wetland forest. . . . You find skunk cabbage while walking deep in wetland bogs and shadowed forest. For it belongs to an ancient world, ancient long before humans walked or talked or breathed. You must wear boots when you go to find it, and dirty clothes. Skunk cabbage is not a plant for white shirts, not a plant for the fastidious.

“Buhner’s writings are a powerful call for people to work together to restore the sacredness of Earth.”

". . . Stephen Harrod Buhner reveals the use of direct perception in understanding nature, medicinal plants, and the healing of disease. . . . This book is a must read for any nature lover."

"Science and spirituality blend in an intriguing ecological assessment of what the plant world can teach us."

". . . how to achieve heart-based perception, and how to learn the medicinal uses of plants directly from the plants themselves."

“I learned more from part one of this magnificent book than from any source in years. Buhner writes of complex discoveries in neuroscience and neurocardiology with clarity and coherence. Encompassing the highest spiritual insights of such giants as Blake, Goethe, and Whitman, part two is worthy poetry in itself, offering readers a unique way to move into transcendent realms. Of the truly great books appearing today, The Secret Teachings of Plants is easily the most rewarding I have had the privilege of reading.”

– Joseph Chilton Pearce, author of The Biology of Transcendence

“In this wonderful book Stephen Buhner shows us that the heart is not a machine but the informed, intelligent core of our emotional, spiritual, and perceptual universe. Through the heart we can perceive the living spirit that diffuses through the green world that is our natural home. Required reading for all owners of a heart.”

– Matthew Wood, herbalist and author of The Book of Herbal Wisdom

“Beautifully written, The Secret Teachings of Plants is a work of art--as much a poetical journey into the essence of plants as it is a guidebook on how to use plant medicine in our healing practices. Stephen Buhner is among the plant geniuses of our time. Like Thoreau and Goethe and Luther Burbank, the master gardeners and “green men” he so liberally quotes throughout, Buhner will be long remembered for his deep and introspective connection with the green world and for his ability to connect us to the heart of the plants through his teachings.”

“A ‘must read’ for herbalists, healers, gardeners, nature lovers, and anyone who has ever been moved to tears by the everyday miracles of life.”

"If you work directly with plants, as a gardener or in herbal and alchemical practices, and want to cultivate a more intimate view of them or simply want to better enjoy your time spent outside and among growing and green things, The Secret Teachings of Plants will help you do both.

"This book is part poetry, part sicence . . . There is an energy that overcomes and refreshes."

“Humanity’s ultimate liberation lies in the realization of the radiant transcendental consciousness in which nature inheres—that ultimate reality to which Buhner’s excellent books always seem to be pointing us.”

"For homeopaths seeking to enhance their sensitivity to nature’s energies, and to complement their understanding of existing proving information, “Secret Teachings” is an enlightening guide."