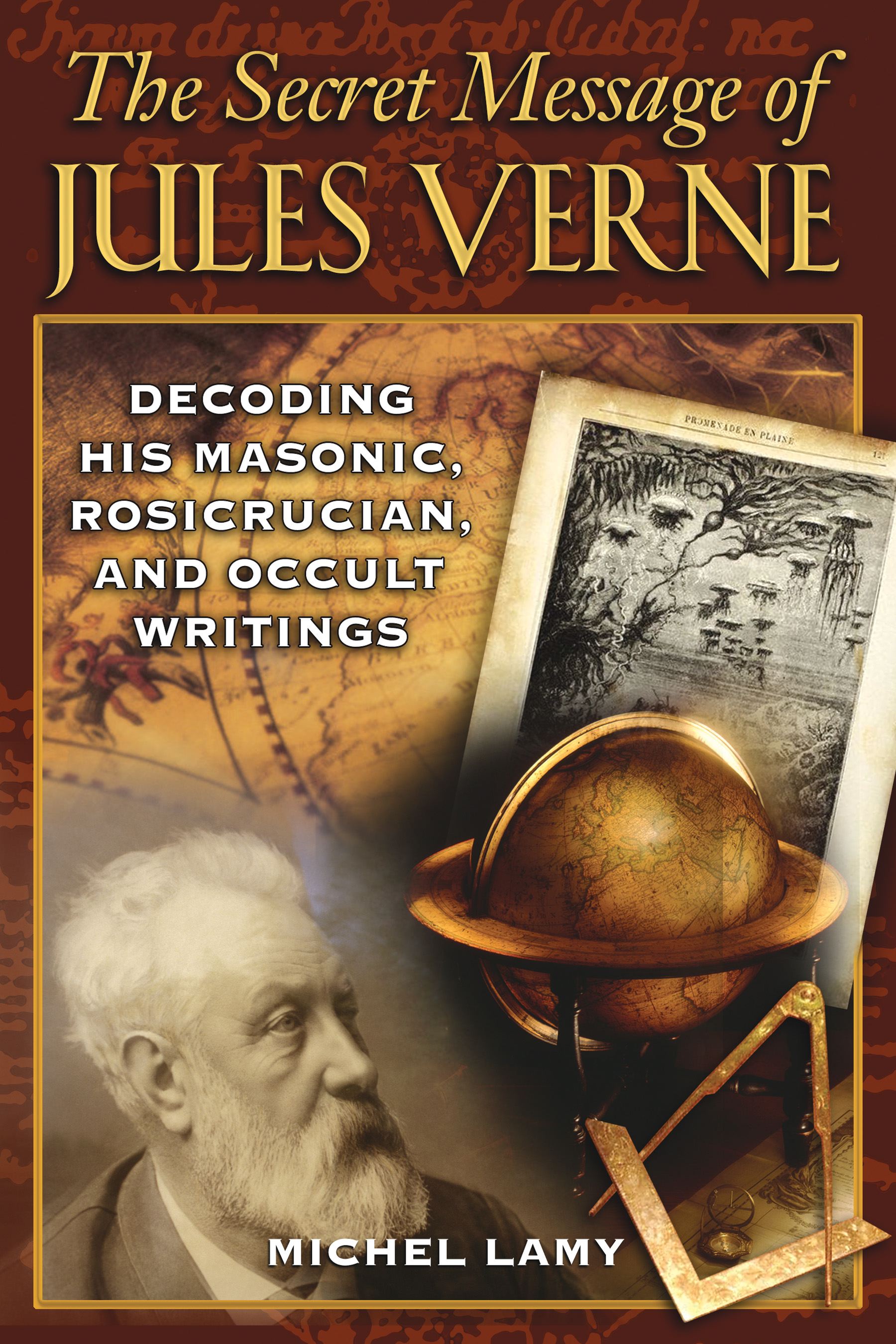 The Secret Message of Jules Verne

By Michel Lamy
LIST PRICE $19.95
PRICE MAY VARY BY RETAILER

Prolific author and pioneer of the science fiction novel, Jules Verne also possessed a hidden side that was encrypted into all his works--his active participation in the occult milieu of late-nineteenth-century France. Among the many esoteric secrets to be found are significant clues to the Rennes-le-Château mystery, including the location of a great treasure in the former Cathar region of France and the survival of the heirs to the Merovingian dynasty. Verne’s books also reveal Rosicrucian secrets of immortality, and some are constructed, like Mozart’s The Magic Flute, in accordance with Masonic initiation.

The passe-partout to Verne’s work (the skeleton key that is also the name of Phileas Fogg’s servant in Around the World in Eighty Days) lies in the initiatory language he employed to inscribe a second or even third layer of meaning beneath the main narrative, which is revealed in his skilled use of word play, homonyms, anagrams, and numerical combinations. The surface story itself is often a guide that tells the reader outright what he or she should be looking for. Far from innocuous stories for children, Verne’s work reveals itself to be rich with teachings on symbolism, esoteric traditions, sacred geography, and the secret history of humanity.

This is not the first time claims have been made that Jules Verne was the author of initiatory novels. Simone Vierne has even devoted a thick tome to this problem, citing as evidence the immutable scenario of initiatory ceremonies that always present three sequences: preparation, voyage into the beyond, rebirth. She had no difficulty in demonstrating that the majority of Jules Verne’s novels followed this outline and even showed that the Extraordinary Voyages can be classified according to the initiatory degree to which they corresponded: initiation of puberty, heroic initiation, and higher initiation. The journeys of exploration and quest form part of the first initiatory degree. This would include, Journey to the Center of the Earth, 800 Leagues on the Amazon, The Green Ray, and a good many others. The second degree consists of the battles against monsters (Twenty Thousand Leagues Beneath the Sea, Michel Strogoff, Begum’s Million, Robur the Conqueror, the Castle of the Carpathians, and so on). Finally, higher initiation would have its corresponding works in those that place their heroes in direct contact with the sacred such as The Mysterious Island, Hector Servadac, The Underground City, Mathias Sandorf, and The Survivors of the Jonathan.

I have no intention of denying the value of this classification or to underestimate the valuable labor performed by Simone Vierne. However, it is regrettable that she did not have a better understanding of initiatory rituals; her analysis is that of an academic anthropologist studying a primitive people. To her, Jules Verne would be a kind of Monsieur Jourdain [the lead character in Molière’s A Bourgeois Gentlemen, which pokes fun at middle class aspirations to climb higher on the social ladder] who practiced esotericism without knowing it. According to Vierne:

Jules Verne did not intend to transmit beneath the cover of a book intended for children a specific initiatory message, in the manner in which Mozart, for example, used a theater piece devoid of interest to exhibit his faith in Masonry. But impelled by the strength of a dynamic model, whose seed can be found in the genre itself, Jules Verne was brought to pose the same questions that religious initiation strives to solve: how to overcome the mortal destiny of man by a radical transformation of being obtained thanks to the direct and mystical revelation of the sacred.

I claim the opposite and intend to prove it. Not only did Jules Verne intentionally follow the model of initiatory rituals but what’s more he followed Masonic rituals very precisely. Not only did he, like Mozart, write a Masonic work, but he followed The Magic Flute quite closely to express his own involvement in Freemasonry. There can be no doubt about this whatsoever.

AN INITIATORY JOURNEY TO THE CENTER OF THE EARTH

The Journey to the Center of the Earth appears like a kind of descent into Hell, worthy of Orpheus, a quest for the center, which is that of all the mystery religions. According to the ancient myths, this will enable the hero to acquire a new life after a veritable rebirth. Isn’t it symptomatic of this to see Axel, Jules Verne’s hero, descend into the earth through the crater of an extinct volcano and reemerge into the light during the eruption of an active volcano? Then we have the priest initiator of the hero who is his uncle, the strange savant Lidenbrock whose name means: he who opens the eyes (from “lid” as in eyelids, and brocken “to break”). Daniel Compère demonstrates the principal initiatory elements of the novel: The discovery of the site takes place during a sacred time, the summer solstice, just as initiations take place at certain times that are set for religious reasons. Early on the novice is rudely separated from his world and undergoes several preparatory ordeals: lessons of the abyss, meeting with the lepers, the figure of death and the ascension of Sneffels. The initiatory journey begins with the descent into the crater. The entry into the realm of the dead is accompanied by purifying rites: lack of water, the crossing of the diamond, and getting lost in the labyrinth. The novice loses consciousness and comes to in the sacred space. Axel bathes in the primordial waters, before undertaking the crossing. He is then sent back to the origins of the world in a dream. He contemplates the “source of life” the geyser that spurts up from the islet that receives his name. In the middle of the storm, Axel receives a baptism of fire. Finally, the return to the profane world takes place. The expulsion is made by fire, the image of a violent rebirth. In this way Axel, who has been capable of absorbing “his lessons of the abyss: he has become fit for contemplating higher things.”

Quite a few of Jules Verne’s other novels follow a similar initiatory diagram. In The Adventures of Captain Hatteras, the entire plot involves the quest for a sacred place, which entails the risk of going mad. The young hero of In Search of the Castaways sets off in search of his father guided by another father, who is an “initiator.” All the elements of an initiation also figure in Michel Strogoff: battle against a monster, ritual blackouts, complete dispossession, a plunge into total darkness, and ordeals of fire, water, earth, and air. Do I need to mention the “Cave of the Dragon” in Begum’s Millions connected with a labyrinthine city? An even better example would be The Mysterious Island. However, simply stating that Jules Verne copied the structure of his books from an initiatory diagram is not enough. Further proof is called for and for that it seems necessary to me to demonstrate Verne’s conscious and deliberate intent by taking one novel as an example. I will use what I think is one of the most beautiful and fascinating of his books: The Underground City.
Michel Lamy

Michel Lamy has spent many years researching the relationship of symbolism, sacred geography, esoteric tradition, and “secret” history to literature. He is the author of books on Joan of Arc, the Templars, and the hidden history of the Basque region. He lives in France.

“To the reader who loves conspiracy and literature, this book is as thrilling as anything by Jules Verne himself. Michel Lamy has decoded not only Verne’s work but a whole line of initiated fiction writers. Rennes-le-Château, the Illuminati, Dracula, and the Thule Society are a few of the ingredients of this mystery, whose keys lie in occult politics and the dark secrets of blood, death, and immortality. Lamy’s work has long deserved a wider audience.”

– Joscelyn Godwin, professor of music, Colgate University, and author of The Real Rule of Four

". . . for those who love literature, a mystery, or solving puzzles, this book will be a gem."

" . . . recommended for any library strong in Verne literary analysis as well as new age collections."

"Mr. Lamy's grasp of the majority of the hidden meanings of Verne's writing and use of words is exceptional. . . . I believe this work would be a great addition to the library of any student of Jules Verne, Freemasonry, Rosicrucians and the Rennes-Le-Chateau aspect of the Holy Grail."

"The subtitle sums up this fascinating account of Jules Verne's active participation in the occult milieu of late 19th century France and his incorporation of Masonic initiation rites into his science fiction novels. The author has spent many years researching the relationship of symbolism, sacred geography, the esoteric tradition, and 'secret' history to literature . . . Students of 19th century occultism will find this book a valuable resource."

The Secret Message of Jules Verne

By Michel Lamy
LIST PRICE $19.95
PRICE MAY VARY BY RETAILER