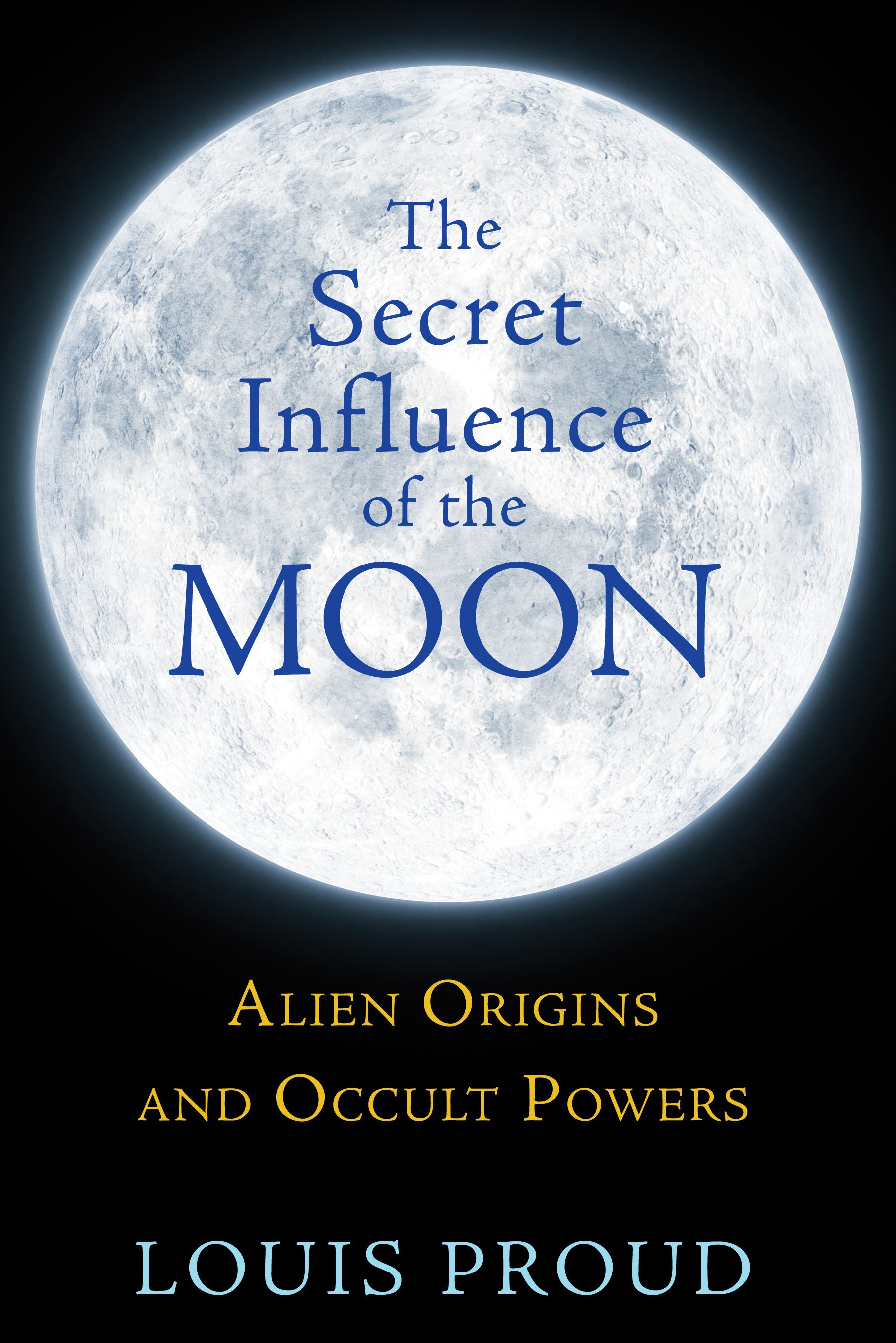 By Louis Proud
LIST PRICE $19.95
PRICE MAY VARY BY RETAILER

The Moon is not a cold, dead rock but a rich, fascinating world just as alive as Earth

• Reveals the many holes in the “Giant Impact” theory about the Moon’s origins and the evidence for a hollow, artificial Moon

• Explores the deep influence of the Moon on the collective mind of humanity and occult teachings about the Moon from the Qabbalah, tarot, and other sources

Despite being the most prominent celestial body after the Sun, the Moon has many qualities that science has yet to explain. Lunar rock samples reveal the Moon once had a magnetic field like the Earth, and seismic experiments by NASA suggest the Moon is at least partially hollow. For centuries people have observed lights, moving clouds and shadows, and even the disappearance of entire craters via telescope. Apollo astronauts repeatedly felt the presence of a “non-human intelligence” during their Moon visits, and many indigenous traditions speak of malevolent visitors from the Moon. A growing body of astrophysical and geological evidence shows the Moon is not an entirely natural world--that someone or something altered it long ago.

Louis Proud explores the phases and movements of the Moon along with its ancient and mysterious features--its craters, maria, rilles, tunnels, and domes. He examines several of NASA’s Apollo missions, showing not that NASA faked the Moon expeditions but that they concealed what the astronauts found there. He explains the many holes in the commonly accepted “Giant Impact” theory of the Moon’s origins and reveals the evidence for a hollow, artificial Moon placed in orbit eons ago to observe Earth. Examining the deep influence of the Moon on the collective mind of humanity, Proud looks at what the Qabbalah, the tarot, and other occult traditions say about the Moon and interprets G. I. Gurdjieff’s teachings that “we are food for the Moon.” He investigates the Moon as a gateway to another realm, as the Purgatory of Christianity, and as the home of an alien intelligence who controls and exploits humanity.

Examining the Moon from both scientific and esoteric perspectives, Proud shows the Moon is not a cold, dead rock but a rich, fascinating world just as alive as Earth.

CHAPTER 8
LIFE ON THE MOON

Before we move onto the idea of a current alien presence on the Moon, we need to look more closely at the idea of a former alien presence on the Moon. The latter goes hand in hand with the notion of alien artifacts--a notion which, surprisingly, has been receiving some mainstream attention of late. Professor Paul Davies and Robert Wagner of Arizona State University suggest, in a 2011 paper, that alien artifacts might exist on the Moon. They even recommend that we search for evidence of such artifacts among the huge database of images taken by NASA’s Lunar Reconnaissance Orbiter (LRO), which at the time of this writing is still in orbit around the Moon.

“Although there is only a tiny probability that alien technology would have left traces on the moon in the form of an artefact or surface modification of lunar features, this location has the virtue of being close, and of preserving traces for an immense duration,” explain Davies and Wagner. The scientists list four possible types of alien artifacts that might exist on the Moon: A message, instruments, trash, and large scale changes to the lunar surface. An ideal place to look for “alien trash,” they suggest, would be inside one of the Moon’s lava tubes. They explain further:

Lava tubes have been proposed as an ideal location to establish a human base, as they would provide protection from radiation and meteorites; perhaps aliens would come to the same conclusion. Furthermore, the same factors that make lava tubes attractive as a habitat imply that any artefacts left behind would endure almost indefinitely, undamaged and unburied. The downside is that there is no way to really investigate this possibility from orbit, so any confirmation or refutation will require a new robotic or human mission to the surface.

What constitutes an alien artifact? And if we came across an alien artifact, would we recognize it for what it is? Such questions arise in the case of the Blair Cuspids, an unusual arrangement of seven spire-like objects of varying heights located on the western edge of Mare Tranquillitatis, not far from the crater Aeriadaeus B. The objects were photographed by Lunar Orbiter 2 on November 20, 1966, at an altitude of approximately twenty-nine miles above the lunar surface. Two days later, on November 22, NASA released an image of the objects. In this image, the objects are shown casting long shadows, giving an impression of great height, while there seems to be a definite order as to their arrangement. As far as I know, the Washington Post was the only newspaper to cover the story, announcing on November 23, 1966, that “six statuesque and mysterious shadows on the Moon were photographed . . . by Lunar Orbiter 2.” The article continues: “Ranging from one about 20 feet long to another as long as 75 feet, the six shadows were hailed by scientists as one of the most unusual features of the Moon ever photographed.”

After seeing the NASA photo of the “Moon spires,” William Blair, an anthropologist at Boeing, began to scrutinize the image. In his previous job as a specialist in physical anthropology and archaeology, Blair had used aerial survey maps--coupled with his knowledge of geometry--to identify potential archaeological sites. It’s an obvious fact that artificial structures tend to be built according to geometric principles, whereas natural structures are generally devoid of geometric significance. With this principle in mind, Blair went over the image with a compass and protractor and was amazed to discover a number of interesting geometric relationships with regard to the arrangement of the “spires,” including--to quote from an article that appeared in Boeing News in 1967--“a basic x, y and z right angle coordinate system, six isosceles triangles and two axes consisting of three points each.” An isosceles triangle is one that has two equal sides (and two equal angles). This is rarer to find in nature than a scalene triangle, which has three sides of different length. Also discovered by Blair was a feature with the appearance of a rectangular-shaped depression, located directly west of the largest “spire.”

Asked during an interview whether he thought the “spires” were the work of non-human intelligence, Blair responded: “Whoa! Do you want them to put me away? But I will say this: If such a complex of structures were photographed on Earth, the archaeologist’s first order of business would be to inspect and excavate test trenches and thus validate whether the prospective site has archaeological significance.”

The Blair Cuspids, as they became known, eventually caught the attention of Russian space engineer and Egyptology enthusiast Alexander Abramov. Abramov conducted his own analysis of the NASA image, concluding, like Blair, that the objects were arranged not randomly but in a geometric pattern. “The distribution of these lunar objects,” he claimed, “is similar to the plan of the Egyptian pyramids constructed by Pharaohs Cheops, Chephren, and Menkaura at Gizeh, near Cairo. The centers of the spires of this lunar ‘abaka’ are arranged in precisely the same way as the apices of the three great pyramids.”
Louis Proud

Louis Proud is a writer and researcher specializing in paranormal and occult phenomena. His work has appeared in Fate, New Dawn, Paranormal, and Nexus magazines. The author of Dark Intrusions, he lives in Melbourne, Australia.

“Louis Proud’s The Secret Influence of the Moon is a fascinating and original book that will forever change the way you view Earth’s nearest celestial neighbor.”

– Mike Bara, author of Ancient Aliens on the Moon

“This is a book that I have been waiting to read. For untold centuries the great orb in the sky has been causing large numbers of our species to become transformed into lovers, looters, or lunatics. In addition to providing interesting scientific data about the Moon, Proud also explores the many occult and esoteric traditions that have grown up around Moon lore and traces our satellite’s influences on psychic seers, sensitives, oracles, and prophets.”

“Louis Proud’s The Secret Influence of the Moon is intriguing and most enjoyable. It is the kind of thing that sparks the imagination and the sense of wonder.”

– John Shirley, author of Gurdjieff: An Introduction to His Life and Ideas

“Louis Proud takes us on a fascinating journey of the Moon’s mysteries in ancient lore and what we may actually have found there. As one who has long suspected that not only did we go but also that we may have found something that caused a tight lid of security to be clamped down, I recommend this book as a valuable addition to the library of anyone interested in space anomalies.”

By Louis Proud
LIST PRICE $19.95
PRICE MAY VARY BY RETAILER