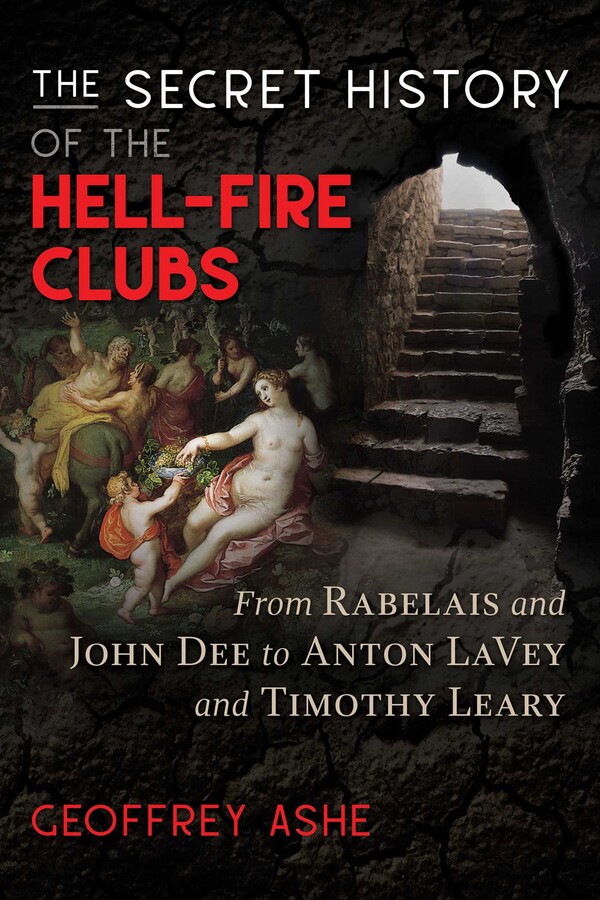 An exploration of the origins, influences, and legacy of the scandalous Hell-Fire Clubs of the 18th century and beyond

• Reveals the club’s origins in the work of Rabelais and the magical practices of John Dee and how their motto, “Do What You Will,” deeply influenced Aleister Crowley

• Explores the cross-fertilization of liberty and libertinage within these clubs that influenced both U.S. and French Revolutions

• Examines the debaucherous activities and famous members of many Hell-Fire Clubs, including Sir Francis Dashwood’s Monks of Medmenham

Mention the Hell-Fire Clubs and you conjure up an image of aristocratic rakes cutting a swath through the village maidens. Which is true, but not the whole truth. The activities of these clubs of upper-class Englishmen revolved around not only debauchery but also blasphemy, ritual, quasi-magical pursuits, and political intrigue.

Providing a history of these infamous clubs, Geoffrey Ashe reveals their origins in the work of François Rabelais and the activities of John Dee. He shows how the Hell-Fire Clubs’ anything-goes philosophy of “Do what you will”--also Aleister Crowley’s famous motto--and community template were drawn directly from Rabelais. The author looks at the very first Hell-Fire Club, founded by Philip, Duke of Wharton, in 1720 and then at the Society of the Dilettanti, a fraternity formed in 1732. Ashe examines the life, travels, and influences of Sir Francis Dashwood, founding member of the Society of the Dilettanti and the scandalous Permissive Society at Medmenham, also known as the Monks of Medmenham. He also explores other Hell-Fire clubs the movement inspired throughout England, Scotland, and Ireland, including the violence-prone Mohocks and the Appalling Club. He shows how many illustrious figures of the day were members of these societies, such as Lord Byron. He also examines the rumors that Benjamin Franklin was a member, an allegation that can be neither confirmed nor denied.

Exploring the political and magical ideas that fueled this movement, the author shows how the cross-fertilization of liberty and libertinage within the Hell-Fire Clubs went on to influence both the U.S. and French revolutions, as well as the hippie movement of the 1960s, the Church of Satan founded by Anton LaVey, and the motorcycle club known as the Hells Angels. The legacy of the Hell-Fire Clubs continues to impact society, beckoning both elite and outsider to cast aside social norms and “do what you will.”

The Dashwoods were connected by marriage with the descendants of Milton. However, there was nothing Roundhead about them. They were old-fashioned Tories, and such rebelliousness as they showed took the shape of mild Jacobite leanings. At sixteen (he was born in 1708) Francis succeeded his father’s baronetcy and estate at West Wycombe in Buckinghamshire, with a great deal of money. He appeared on the London scene too late for the original Hell-Fire Club, but the general rakish milieu suited him well. In 1726 he made the Grand Tour with a tutor. The outcome was a legend to rival Wharton’s, which, in this case, the hero lived to enjoy and exploit.

His tutor--at least according to the received story--was a Catholic Jacobite, chosen by senior relations from political motives. Francis himself was ready and eager to sample anything, including Catholicism and Jacobitism. In later life he used to say “Taste the sweets of all things.” But his notion of sampling was to fling himself into a role, to strike an attitude rather than to explore an idea. The pair of them moved across Europe in an atmosphere of charades, crises, demonstrations, and fornications.

The tour ran to a second installment during 1729-31. In Rome Francis’s companion exposed him to the holiest shrines in the hope of converting him. His usual reaction was to laugh. On Good Friday he did more than laugh. It was customary on that day for penitents to go into the Sistine Chapel. An attendant handed each a miniature scourge, a priest put out the candles, and the congregation bared their shoulders and symbolically beat themselves, chanting prayers and lamentations. Francis, more impressed by the chapel than by its occupants, decided to test them with a proper penance. Returning muffled in a long cloak, he waited till the chapel was dark again and the holy exercises were in full swing, then produced a real horsewhip and strode up and down given the penitents a real flogging. Amid yells of “Il diavolo! il diavolo!” they jumped up and fled to the door. It was some time before they were all convinced that the Devil had not appeared in person.

On the face of it this was hardly more than a lark. It has a sequel, however, that makes Dashwood himself the butt, and raises queries about him. One night the tutor was woken up by cries of alarm, and found his young baronet staring in terror at four green eyes gleaming in an eerie uproar. They belonged to a couple of squalling cats; Francis insisted that a four-eyed devil was after him. The tutor knew better but foolishly did not say so, and for a while Francis was a Catholic convert. Disillusionment, when the tutor betrayed the secret to a friend and it came back to him, revived his old scorn so violently that he never recovered from it.

After his tours abroad, Sir Francis wavered homewards displaying a mixed bag of characteristics. He had the sexuality of the rake carried even further than it usually was: in the words of Walpole’s son Horace, “the staying power of a stallion and the impetuosity of a bull.” He had an erratic restlessness and, in particular, a fixed contempt for most religion--not in the spirit of sceptics like Voltaire, but with a continued adolescent fondness for mockery and blasphemy, which helped to nourish a continued flirtation with the black arts. Also he had fair artistic taste, with an Italian bias, and a penchant for (so to speak) being art as well as looking at it, which took the form of dressing-up, role-playing, forming live tableaux, and being painted.

With all his quirks Dashwood exuded a warmth and a good-fellowship that were not bogus. When he grew to be better known and entered politics, hostile critics like Horace Walpole accused him of “cultivating a roughness of speech” and generally setting up as a plain blunt man, in the style of Shakespeare’s Mark Antony. But this was not as much of a pose as they imputed. He was eventually to become Chancellor of the Exchequer.

During the 1730s Sir Francis was digging himself in at West Wycombe and exploring London. His town house was 18 Hanover Square. He bought erotic and magical books from Edmund Curll. He may have joined the Hell-Fire Club at the George and Vulture. He did join the Sublime Society of Beefsteaks when it was started, or rather reconstituted, in 1735. But he had already taken a more important step. Noting how an emancipated mode of life, a philistine baiting love of art and a spirit of political disaffiliation were all tending to flow together and appear in the same people, he took the lead in forming a new fraternity (members were forbidden to call it a club) where such people could combine.

This was the Society of Dilettanti. It was launched in 1732 with about forty members. Most were young. Some, a little older, were perhaps veterans of the Hell-Fire Club of Wharton. They met on the first Sunday of the month at the Bedford Head Tavern in Covent Garden--and later at another tavern, in Palace Yard--with unfettered conviviality and a part-comic, part-magic ritual probably devised by Sir Francis himself. The books were kept in a casket called “Bacchus’ tomb,” and an officer known as the Very High Steward carried a silver image of the god round his neck. The President wore a scarlet toga and sat in a curule chair. The Archmaster of Ceremonies had a “long crimson taffeta robe full pleated with a rich Hungarian cap and a long Spanish Toledo.” At initiations an “Imp” played an important part. He too wore a red robe, and he·carried two lighted tapers and had a tail stuck on behind. The Secretary was always dressed as Machiavelli. The seal of the Society was a staff with coiled serpents.
Geoffrey Ashe

Geoffrey Ashe is widely regarded as one of the leading Arthurian specialists in the world and is author of several books, including King Arthur’s Avalon and The Discovery of King Arthur. Ashe became a Fellow of the Royal Society of Literature in 1963 and was appointed a Member of the Order of the British Empire (MBE) in 2012. He lives in Glastonbury.

“Geoffrey Ashe, one of Britain’s most outstanding historians, paints a vivid picture of Francis Dashwood’s Hell-Fire Club and other similar secret societies in this page-turning review of one of England’s most audacious periods of history.”

“A sweeping history of libertinism seen through the lens of the English ‘clubs’ of the eighteenth century. Precise and cogent, it also freely wanders the halls of infamy, painting portraits of some of the subject’s most notorious figures. The motto ‘do what thou will’ defines a stance through this history, one that pulls at the Gordian knots of pain and pleasure, freedom and destiny.”

– Jesse Bransford, associate professor of visual arts and chair of the Department of Art and Art Profe