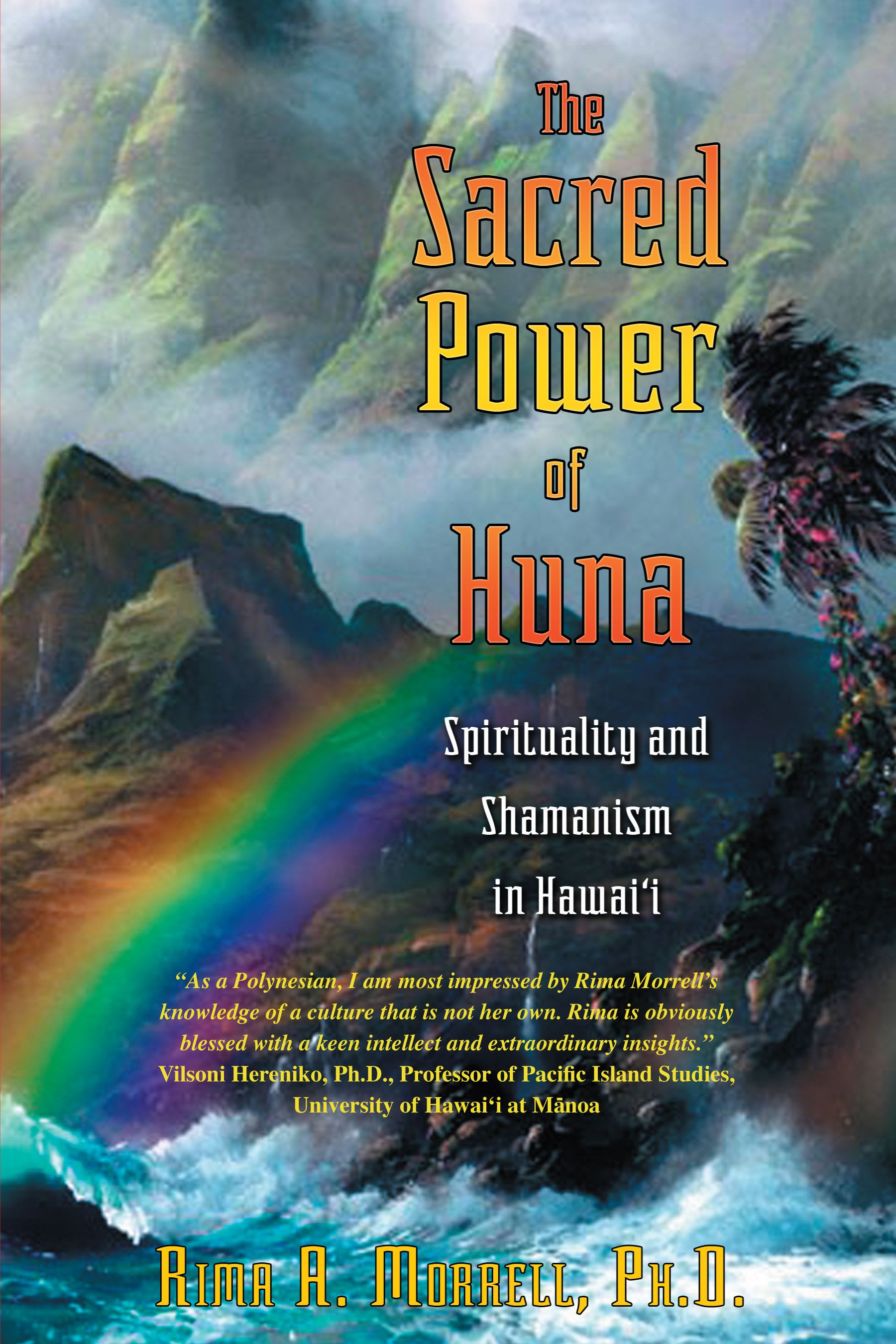 The Sacred Power of Huna

Spirituality and Shamanism in Hawai‘i

By Rima A. Morrell
LIST PRICE $18.95
PRICE MAY VARY BY RETAILER

When Rima Morrell first went to Hawai‘i as a young anthropology student from Cambridge University, she was surprised to find a lighter brighter world where trees talked to her in ancient temples and magic regularly happened. She found the system of ancient Hawaiian wisdom known as Huna, a system that teaches us how to focus the light of our own being to make magic. Following her Higher Self--and overcoming resistance to its rainbow guidance--she discovered we are each responsible for our own power. Through practicing Huna, we can consciously create our own reality, for we are each the navigator of our own soul canoe.

Following her years in the islands, and Ph.D. in Huna, Rima reveals new knowledge about this sacred tradition. Citing the work of earlier researchers such as Max Freedom Long, as well as native kahuna, Rima reveals knowledge about Huna that has not previously been available: the role of emotion in gaining true wisdom, the magical elements of Hawaiian language, the sophisticated system of lunar astrology, and the hula as a system of shamanism. Rima also shows how the principles of a society woven with love can shape our own lives.

The Enchantment of the Islands

At first sight it looks as if the only magic in Hawaii is physical enchantment. The moon is made of silver, the sand is scoops of gold, the ocean is laid out like a deep velvet throw. Yet look a bit deeper and you will find magic beyond the enchantment of the physical beauty. For instance, spend some time with the boozing and ukulele-playing “boys on the beach” and you’ll discover how enchanting and strong Hawaiian culture still is. The indigenous Hawaiians often chant to the ocean in their native Hawaiian before they go in for a swim and give thanks after they come out; they may have a stone they “look after”; they almost certainly will have a lot of “aunties” and “uncles” who are well-versed in Hawaiian lore. If they like you they will tell you about mana, the force running through everything in the universe, and their aumakua, their guiding spirit. If you know them for longer they will probably take you to their sacred places--you would be amazed at the number of sacred places along just one stretch of Hawaiian beach--and introduce you to their kahuna, their shaman or “expert” chosen at childhood to guide them in developing their particular gifts.

There are many kahuna remaining in the islands. The kahuna is the lord and lady of many dimensions. He or she is adept at controlling the invisible. We are all kahuna-in-training. We all influence the visible and invisible realms, whether we want to or not. Have you noticed that people can seem to act rudely toward you when you’re in a bad mood? Similarly, when you have a great feeling do you notice how the world reflects that back to you? The person who bags your groceries is kind; even the birds in the park hop up to you. They are responding to your signals, even the ones you are not consciously projecting.

Kahuna are not different from us in kind, merely in degree. Those of us who are not kahuna are kahuna-in-waiting. The kahuna were recognized in old Hawaii as masters of the unseen. They knew how to direct their consciousness, to focus their po, or “potential,” through thought. We all have the power to focus, wherever we are and whoever we are. The hero, at some stage, made the choice to be a hero, and followed it with a great deed. The businesswoman made a choice to throw her energies into commerce and it worked out. If you wanted to, you could do the same. You can do anything you want. You will always be in the right place at the right time. But you won’t succeed if you don’t choose. And you will not succeed if you don’t stick to that choice.

When you are focused, you are able to perform feats of magic. You are unbelievably powerful. It is focus that gives the sun its power to burn. It is focus that saved the kahunas feet from being burned when they walked over hot lava. Directed consciousness is the power that makes magic happen. When it is strong enough, directed consciousness, even if only held by one individual, can change the course of nations. Remember Mahatma Gandhi, who, by overturning the rule of the British in India, overthrew the greatest empire in the world. Not only that, but the Mahatma, “the Great Soul,” managed this through the principle of non-violence.

Kahuna have a great deal of knowledge, which they know how to use to make miracles happen. If they only had the knowledge but could not use it, they would not be kahuna. Undirected consciousness cannot lead to mastery, or even mystery. It will lead to weakness or, at best, to a series of “coincidences” that is the universe’s attempt to put you back on your path.

You cannot stop the world from moving. Our world is always being created anew. Perhaps this is just as well as the earth moves into the fifth dimension of love and light.

The root meanings of aka, “the potential for greater consciousness,” reflect this inherent movement. The dim, silvery aka can only be properly brightened by applying the remaining twin tools in the search for magic: mana and directed consciousness. To reach your Higher Self whenever you want, you need to attach your brightening aka to a structure. In astrology, the planet Saturn stands for structure. Known as the “taskmaster,” Saturn can be a dreaded planet--but structure need not be a bad thing.

The mana we build with must have structure in order to last. True confidence is shown by result. There was a rigorous program of tests for intending practitioners of Hawaiian magic. The final test for the followers of one kahuna (and sometimes it was final in more ways than one), consisted in demonstrating how your thoughts are more powerful than natural laws. Initiates were given a strong poison to drink and left on the beach overnight. Some died, some lived. It is likely that the missing ingredient in those who died was confidence that their magic is stronger than the “natural laws” of the poison. Remember, the body is made up of aka that is held together by mana. If there were any doubt that leakage would occur in the mana that holds the body together, the initiate would die. The initiate who lives has truly learned how to use mana loa, the miracle power of the fifth dimension.
Rima A. Morrell

RIMA A. MORRELL has a doctorate in Hawaiian Shamanism from the Department of Geography, University ­College London, and a Masters and Honours degree in Social Anthropology from Cambridge University. She spent years in Polynesia conducting fieldwork with many ­kahuna on remote islands and teaching at universities, including the University of Hawai‘i. A ­fellow of the Royal Geographic Society and the Royal Anthropological ­Institute, she lectures at international conferences. She also teaches Huna in ­Europe. She and her husband live in London and the Scottish Highlands. Rima’s website is www.hunalight.com.

“Rima has seen the islands by foot and sleeping under the stars. In return she has experienced the islands the way that few visitors ever do. Not only has she learned vital information, but she has done so with a heart and mind open to island ways. . . . as a native Hawaiian I am honored to recommend this book.”

"As a Polynesian, I am most impressed by Rima Morrell's knowledge of a culture that is not her own. Rima is obviously blessed with a keen intellect and extraordinary insights."

"Writing with loving respect for the boundaries and sacred beauties of Hawaiian ancestral lore, Rima A. Morrell acts as a spiritual ambassador for this primordial, oceanic tradition."

– Caitlín Matthews, author of Singing the Soul Back Home and The Celtic Spirit

"Rima Morrell is to be applauded for bringing . . . to our attention: an ancient and holistic culture which is built on an unbroken tradition of accumulated human wisdom and which finds meaningfulness at all levels of our being. Dr. Morrell is uniquely able to bring academic rigour and wide knowledge of her subject to bear, yet her book is much more than dry scientific reportage of anthropological data . . . .when she leaves the work of other authors behind and describes her own direct experiences with the people and culture of Hawai‘i her book really flowers. Surely this is the acme of anthropology: to take the experiences and lessons of research directly back to the people, so we can begin to remember the brightness that illuminates our lives.”

"I love this book! . . . . Rima’s delightful [The Sacred Power of Huna] will fulfill a vital role in introducing many people to what she describes as the 'bejewelled path' to knowledge, through Huna.. . . . [Morrell] takes us there by proxy and shares with the avid reader the mysterious power and majesty of Hawai’i that has led so many people to think of it as the chosen land of the New Age. . . Perhaps the key to personal grace, as the authoress says, is that the real land of Huna moku or “secret island of paradise,” resides deep within each of us. This book can show the Huna way to those beautiful lands."

"The most significant breakthrough in Lay thinking since Zukav's Dancing Wu Li Masters."

– Pila of Hawaii, author of The Secrets and Mysteries of Hawaii

“Dr. Morrell writes in a fascinating way to give us insights to old Hawaiian ways of looking at healing.”

“Rima Morrell's thoughtful book on Polynesian spirituality is essential reading for anyone really interested either in plain anthropology or the broader study of world esotericism.”

"The Sacred Power of Huna provides a wealth of scientific and anthropological information in a delightfully engaging page-turner of a book. . . . I highly recommend this wonderful book to anyone interested in Hawaii, shamanism, and spiritual growth."

"From an understanding of how the unconscious operates in both Freudian and outside of Freudian realms to how the classic Hawaiian hula dance draws in spiritual force and connections, The Sacred Power of Huna provides plenty of in-depth observations."

"This is one of the finest recent books written about the sacred power of Huna. . . . Rima Morrell continues in the tradition of investigators into Huna, and arrives at some intriguing insights."

The Sacred Power of Huna

Spirituality and Shamanism in Hawai‘i

By Rima A. Morrell
LIST PRICE $18.95
PRICE MAY VARY BY RETAILER