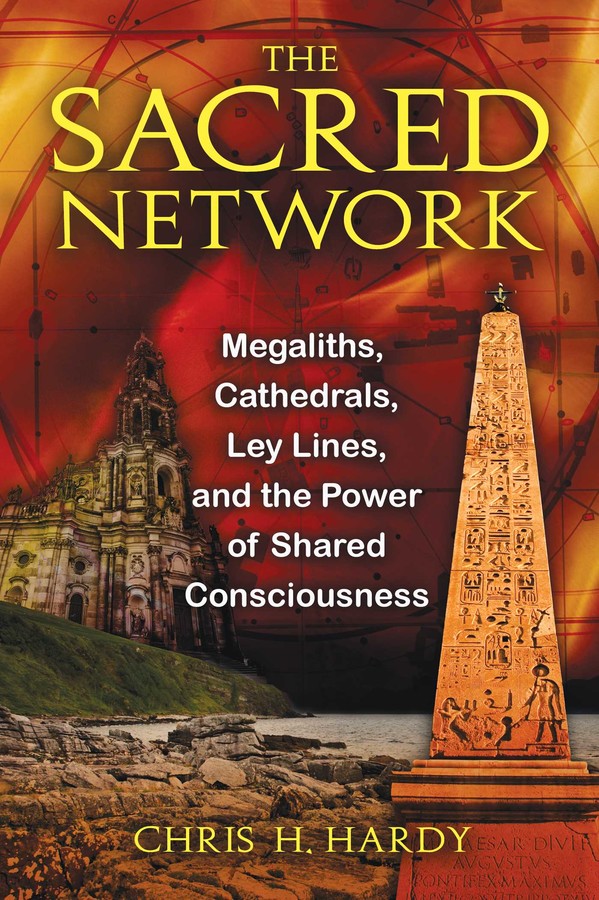 How sacred sites amplify the energies of consciousness, the earth, and the universe

• Examines the web of geometrical patterns linking sacred sites worldwide, with special focus on the sacred network of ley lines in Paris

• Reveals how consciousness is a tangible form of energy

First marked by the standing stones of our megalithic ancestors, the world’s sacred sites are not only places of spiritual energy but also hubs of cosmic energy and earthly energy. Generation upon generation has recognized the power of these sites, with the result that each dominant culture builds their religious structures on the same spots--the Cathedral of Notre Dame in Paris, for example, was constructed over a Temple to Diana that in turn had been built over a stone pillar worshipped by the Gauls.

In The Sacred Network, Chris Hardy shows how the world’s sacred sites coincide with the intersections of energetic waves from the earth’s geomagnetic field and how--via their megaliths, temples, and steeples--these sites act as antennae for the energies of the cosmos. Delving deeply in to Paris’s sacred network, she also explores the intricate geometrical patterns created by the alignments of churches and monuments, such as pentagrams and Stars of David. Revealing that consciousness is a tangible energy, she explains how the sacred network is fueling an 8,000-year evolutionary cycle initiated by our megalithic ancestors that will soon culminate in a new state of shared consciousness for humanity.

Giant telluric waves, undulating vertically and linked to the geomagnetic field of earth, create a network of crisscrossing lines all around earth. The megaliths’ builders understood that the points at which these waves crisscross each other had a tantamount effect on consciousness, and they marked them with standing stones, which became open-air temples until the Roman and Christian eras. Since any elongated or pointed vertical shape (such as menhirs, steeples, or towers) acts as an antenna attracting cosmic energies, the waves flowing through a network of standing stones or churches are in fact cosmo-telluric waves.

The megaliths’ people must have had the gift of seeing and sensing these cosmo-telluric lines, which enabled them to gather a body of knowledge about their influence on human consciousness. Since these cosmo-telluric lines are naturally oscillating, erecting a standing stone or a temple at their crossings would fixate them. Once fixated, their energizing power was constantly accrued by the people gathered there to pray--that is, by the energy of consciousness, called semantic energy.

The Sacred Network in France, especially in Paris, unveils a geoarchitectural planning that has respected these energetic laws over the two millennia of the Gallo-Roman and Christian eras at the very least. The building of Gothic churches on top of Roman-style churches, above Gallo-Roman temples, themselves on top of Druidic cult places, in their turn set at the very spot where megaliths had been erected kept charging sacred sites resonant with the earth with ever-more spiritual energy. According to the semantic fields theory, this continuously expanded and empowered the same semantic field (consciousness field), by concentrating spiritual energy on places naturally beneficial to soul and body. Over the ages, the Sacred Network of each religion had thus been precisely and respectfully embedded within all previous networks, weaving an architectural Great Work dedicated to the elevation of consciousness--not only in space but also in time. The sacred nave of initiates--a symbolic representation found in many religions--was superbly crossing time toward its luminous Omega Point: the dawn of a harmonized collective consciousness.

In Paris, the outstanding geo-architecture of the sacred network creates a constant bouncing of meaning among geometry, names, symbolic forms, and nature’s beauty, such as the Seine and Paris’s seven hills. Whole ensembles of buildings were fitting into vast structures based on sacred geometry. To give you an idea: A large triangle is formed by three of the five churches dedicated to Saint John the Baptist (plate 1). The inner node of this triangle is the Obelisk. The eastern side of the triangle goes through Saint Sulpice Church (built above an ancient Isis temple), then passes in front of Carreau du Temple--part of the medieval headquarters of the Knights Templar’s worldwide order. Another line in this structure runs into the prominent St. Denis church, and connecting St. Denis to the three St. John churches creates a pyramidal shape. The symbolical richness of the whole St. John’s Pyramid is astounding. It makes reference to Egypt and Isis (the Obelisk and St. Sulpice Church), the Knights Templar, their two saint patrons John the Baptist and St. Denis, and finally the Priory of Sion (St. Sulpice Church). It is especially amazing in regard to emergent data suggesting that St. John the Baptist, highly revered by both the Templars and the Priory, would have been an adept of a Gnostic cult that originated in Egypt.

The Sacred Network within Paris, while certainly inspiring, is not unique: high sites of different religions and ages are connected all over the planet. According to Philip Thomas, the grand east-west axis of Paris--which runs by Luxor Obelisk at La Concorde Plaza and the Louvre’s glass pyramids--when extended as a circle route surrounding the planet, reaches Mount Sinai. Another circle route, running mostly south of the Seine, goes through Knossos in Crete, the Sphinx in Egypt, and Mecca, among other sacred sites (plate 3).

Decoding the Sacred Network and unveiling its history written in stone leads to inevitable questions about its purpose: What does such a Great Work extended worldwide and spanning over eight millennia point to? If temples and churches built at major crossings of sacred lines have a spiritualizing effect on people, what could be the all encompassing effect of the planetary network? Was this grid intended to steer and accelerate the dawn of a planetary consciousness?

It was in Brittany, at a community of monks of an orthodox Celtic order, that I experienced for the first time a field of collective consciousness. There was a mysterious “telepathic call” that would gather the monks dispersed in the various rooms and surrounding fields. I could feel the minds of the monks constantly present in my own mind, and to regain my inner state, I had to get some distance from the monastery. This experience would have been nothing but anecdotic and shallow evidence if it hadn’t been for two wholly unexplainable observations linked to space.

The first was my discovery of a precise spot on the path to the fields beyond which, quite abruptly, I realized I was alone with my thoughts again. It was so stupendous that I played with this “limit”--going in and out of it--until I was utterly convinced that a single step got me inside the consciousness field (sensing the others’ minds crowding mine), while retracing that step got me outside of it again.

A second observation was a grayish grid neatly visible on the clear summer sky, above the monastery. It was made of thin lines intersecting at near right angles and forming rectangles, imperceptibly curved as if the geodesic grid had been quite large. I had the impression it was a dome covering the monastery and the church nearby.

A few months later, in the Himalayan mountains of northern India, I confronted again the reality of the grid in the sky as well as that of a telepathic field. That’s when it dawned on me that they were somehow interconnected.

Chris H. Hardy, Ph.D., holds a doctorate in ethno-psychology. A cognitive scientist and former researcher at Princeton’s Psychophysical Research Laboratories, she has spent many years investigating nonlocal consciousness through systems theory, chaos theory, and her own Semantic Fields Theory. The author of many research papers and published books, including DNA of the Gods and The Sacred Network, she lives in France.

“Few among us are willing to follow our thoughts and intuitions until they bloom with discovery. Chris Hardy has devoted her life to finding out what lies beyond the veil and bringing it back to us so that we might share in her vision. The Sacred Network is nothing less than fascinating.”

“Chris Hardy has been exploring the complex relationship between mind and matter over her entire career as a researcher and consciousness explorer. Now, with The Sacred Network, she’s provided the definitive work on ley lines and other physical locations of power and their relationship to the psyche.”

– Robin Robertson, Ph.D., clinical psychologist, associate professor at the California Institute of In

“Chris Hardy is one of the most intrepid explorers of the frontiers of consciousness. The Sacred Network provides its readers with a blueprint for their development both as individuals and as members of the human species.”

“A scientist mind meets a visionary sage in author Chris Hardy. She foresees our individual souls weaving networks that will connect all over the world. One of the most creative and original books of our times.”