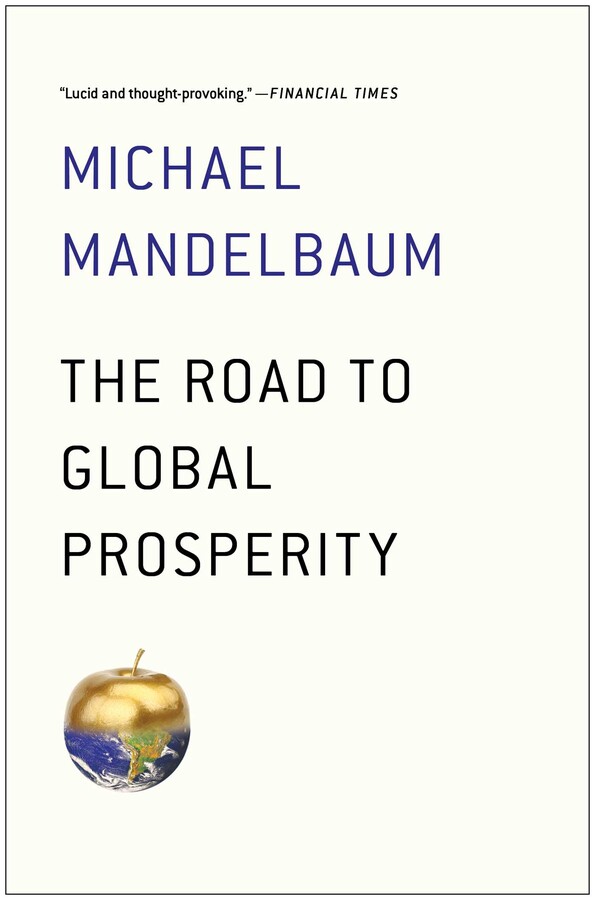 By Michael Mandelbaum
LIST PRICE $11.99
PRICE MAY VARY BY RETAILER

In That Used to Be Us, the blockbuster Michael Mandelbaum wrote with Thomas L. Friedman, the authors analyzed the challenges America faces, including globalization, and described a path to recovering America’s greatness.

In his widely and well reviewed The Road to Global Prosperity, Mandelbaum, one of America’s leading authorities on international affairs, looks at whether our optimism about the world’s economic future is justified in view of the financial meltdown of 2008, still being felt; Europe’s troubled currency; the slowing growth of China and other emerging nations. He concludes that while the global economy does face major challenges in the years ahead, there are compelling reasons to believe for optimism.

Mandelbaum says that globalization is both irreversible and a positive force for the United States and the world. As technology and free markets expand and national leaders realize that their political power rests on delivering prosperity, countries will cooperate more. As more nations connect, their economies will grow. As immigration increases, as more money crosses borders, and as more countries emerge from poverty, individuals and societies around the world will benefit.

The Road to Global Prosperity illuminates the crucial issues that will determine the economic future. Mandelbaum makes a persuasive case for optimism as well as offering a concrete, practical guide to the challenges and opportunities that lie ahead.

Michael Mandelbaum is the Christian A. Herter Professor and Director of American Foreign Policy at The Johns Hopkins University School of Advanced International Studies in Washington, DC. He is the author or coauthor of thirteen previous books, most recently the bestseller That Used to Be Us, with Thomas L. Friedman.

“[A] very original take on this story. . . Michael Mandelbaum. . . argues that while global economics does not eliminate geopolitics, it does indeed trump global geopolitics today.”

"A concise, insightful and readable stock-taking of the state of globalization roughly five years after the financial crisis began."

"An incisive assessment of the political problems underlying our increasingly integrated world economy. ... All readers ... will admire his firm grasp of economics and history, his startling analogies—for example, comparing the study of economics to the science of seismology—and his smooth, genial delivery of complex information."

“This short book tells you everything—well, almost everything—you need to know about globalization, including its upsides, its downsides, and why the former will triumph over the latter. Read it for understanding, for encouragement, and for a better idea of what the future is likely to hold.”

– Alan Blinder, author of After the Music Stopped

“Politics and economics are often discussed separately. But in the real world they are intertwined, just as they are in Michael Mandelbaum's lucid study. For anyone wishing to understand the political forces that underpin and shape the global economy, there could be no better guide.”

“If you are interested in the future of geopolitics and international economics, this book is for you. Whatever the current issue—military tensions in Asia, trade negotiations across the Atlantic, post-crisis financial reforms, China’s emergence—The Road to Global Prosperity provides a clear and compelling framework for anticipating where, how and why stronger growth will emerge around the world.”

“Both advocates and detractors of globalization will find plenty of fodder in this book by a Johns Hopkins University international studies professor.”

“The Road to Global Prosperity, points out something that may seem obvious but is nonetheless important and underappreciated… The book is enlivened by Professor Mandelbaum's prose and by his eye for a useful metaphor.”

“The Road to Global Prosperity illuminates the crucial political issues that will determine the economic future. Mandelbaum makes a persuasive case for optimism and offers a concrete, practical guide to the economic challenges and opportunities that lie ahead.”

By Michael Mandelbaum
LIST PRICE $11.99
PRICE MAY VARY BY RETAILER