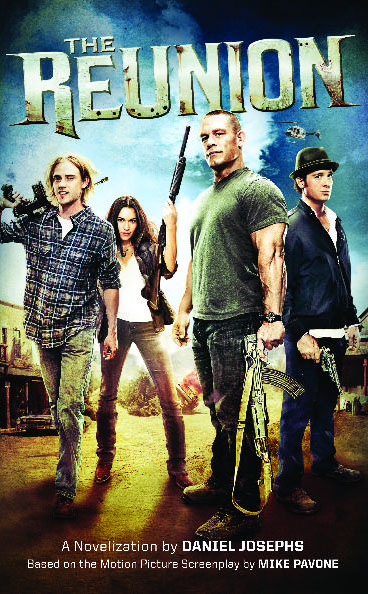 By Daniel Josephs
LIST PRICE $18.99
PRICE MAY VARY BY RETAILER

After the death of her father, Nina Carey fulfills his last wish and struggles to bring together her three estranged brothers: Sam, a hardened cop currently on suspension, Leo, a loud-mouthed bail bondsman, and Douglas, a charming twenty-year-old thief fresh out of prison, who never even knew he had a family. Sam, Leo and Douglas are eager to inherit their father’s sizable fortune, but there’s a catch— before they can claim the money, the three brothers must start a family business together.

Leo becomes even more desperate for the cash when one of his bails skips town, and soon all three brothers are on the chase. They become entangled in a war with Mexican drug cartels and wind up in the hunt for a kidnapped American billionaire. Their search will take them through the strip clubs, mountains, and deserts of Mexico where they will have to learn how to work together as a family if they want to stay alive.

Los Angeles, California: City of Angels, city of nothing. Ten million people living fast and breathing smog with no connections, no problems, no ties. A bustling city spread out from coastland to farmland to desert townships, from water to drought. The only chain that linked the desperate and disparate neighborhoods of this wide, sprawling town was the long, heavy arm of the Los Angeles Police Department, an unlikely, violent unifier for a dysfunctional city. Los Angeles was informally known as the “Gang Capital of the Nation,” and so it was no surprise that the authorities acted accordingly, earning a reputation for being one of the most violent forces in the country. Even now, almost twenty years after the race riots prompted by the Rodney King trial, the city was still on edge, walking the thin line between racial sensitivity and an authoritative stance over such a wide swatch of neighborhoods, races, and cultures. All the PR in the world couldn’t change the past, but it could inform what came next. It could help the large force adapt and prepare for the changing landscape of the future, regardless of the violent undertones of the city.

Detective Sam Carey knew that, and perhaps that’s what drew him into the line of work. On the force it was often hit first, ask questions later—not that different from what he saw growing up. But that was years ago.

The downtown skyline was all glass and steel, all the better to reflect the constant California sunlight. Brutal traffic perpetuated the smog that seemed to reach all the way to the ocean, the noises from the cars and trucks the only organic symphony Los Angeles could truly call its own.

Most of that was evident to Sam, who sat uncomfortably in the small, wobbly chair, his muscled frame towering over the cheap steel and fabric. His boss, Captain Haymer, sat across from him, his face set in the usual scowl. His words droned on but Sam wasn’t listening; his eyes traveled to the open window, the dirty square framing the view of glaring sunlight and glass buildings beyond. He knew he should be paying closer attention to the angry noises coming from his captain, but something was distracting him like a rock in his shoe: an errant thought of his younger brother, Leo, even though they hadn’t spoken in well over ten years. Theirs had not been an easy childhood, which probably explained the ten-year gap in communication. But one memory stuck in Sam’s mind: the little boy with the loud voice and terrified eyes looking up at Sam, his older brother. Hit me, he remembered, the words repeated over and over again. Hit me, hit me, hit me …

Captain Haymer’s booming voice brought him back to the present, to the small, stuffy room, where the captain had set up a flat-screen television monitor on which to view Sam’s latest indiscretion. A couple of the other wonks from the force, officers who should have been out preserving the peace or at least grabbing a sandwich at their favorite spot two blocks away, stood in the corner of the room, only thinly veiling their smiles now that Sam once again had been called to the carpet.

“My God, man, but you did hit that sumbitch sweet …” Captain Haymer’s words trailed off, his eyes remaining glued to the screen.

Sam registered his boss’s face, sensing a bit of pride in his words, before looking again at the flat-screen television sitting on the table beside them. Frozen on the screen was the frenzied face of a madman, a towering block of muscle and flesh with wild, crazy eyes. Sam hadn’t seen that look in a long time: the hard, open stare, a violence he could feel through the still image. Worse, he barely recognized his own face.

Captain Haymer unfroze the image and rewound the scene—a bright day, the steps outside the Los Angeles courthouse, the grass surrounding it a vivid green. He watched some lowlife in a cheap suit gloating about a victory before a twin set of news cameras that were all too eager to record the scene that was about to happen. From behind, Sam, blatantly ignoring the news cameras and the fact that they would be recording him, charged at the unidentified man, sweeping him up in the wake of his fury and placing his massive right shoulder squarely in the man’s chest. The man was airborne for almost two seconds before Sam sent him crashing to the ground: the perfect tackle. On any given Sunday, on any football field in the country, he would be labeled a hero. But not today. And not in Los Angeles.

Captain Haymer ran the scene back a few more times, watching the violent act over and over again as Sam became increasingly uneasy in his chair. The two other cops in the room continued to laugh and collar each other, completely amused by the scene repeating on the screen. Haymer played and replayed the point of impact until Sam once again could feel the physical force on his chest, the contact of taking the scumbag down. He tried to slow his breathing and remain calm.

Captain Haymer paused the scene and let out a long sigh, his dark hands falling slowly to his desk. His eyes looked weary.

“Did you have to jack him up on national TV?” Captain Haymer asked.

Sam almost didn’t know what to say. They’d been here before and it wasn’t a new story, not for him. Angry cop. Guilty perp. The system letting the guilty go free. It happened every day in Los Angeles. Sam was sick of it.

Nonetheless, Sam measured his words carefully. “I was …” he said, pausing to let his eyes scan the room, “frustrated.”

Wrong word. The captain pointed his remote at the monitor, which still held Sam’s wild and crazy face, as if it would be frozen that way forever.

“Frustrated? You look like the poster boy for bipolar disorder.” The captain’s voice was flat and measured, as if he, too, knew they’d been here before.

Sam noticed his boss’s calm and made the decision to go on the offensive. “This guy rapes a ten-year-old and gets off?” He paused to steady his voice. “I got a ten-year-old.”

Captain Haymer grew quiet then and stared at his desk. Sam looked at him pleadingly, but they did not make eye contact.

“Well, I just wish you woulda killed him,” Captain Haymer finally said. “It would have taken the sting out of losing my best cop. I’ll need your gun, et cetera.”

Sam pulled his ID from his jeans pocket and threw it on the desk, letting it bounce across the polished wood. He let the gun go more slowly, pulling it gently from his belt holster.

Captain Haymer grabbed them both, clearly eager to get this task over with. For the first time, Sam felt worried. He’d been in trouble before—too much aggression, too quick to get physical with a suspect out in the field—but never like this. Never suspension.

“I will try to clean this up and get you back on the job ASAP.” The captain didn’t sound very hopeful.

But Sam ignored him, thinking already of what a suspension would mean for his career. For his paycheck. He was a good cop, he knew it. It wasn’t his fault the system let scumbags walk free around the city. Sam knew what justice meant, and he knew how to make those who were guilty pay the price for their deeds.

Just then a uniformed officer stuck his head in the doorway to Captain Haymer’s office. The captain looked up expectantly, but the officer gestured with his head toward Sam.

“Sorry, Cap. Sam, your sister called. She wanted you to call right back.”

A strong uneasiness began to grow in Sam’s stomach. First the out-of-the-blue thought of Leo and now a phone call from Nina? Sam suddenly had the sense that if Nina was looking for him, getting suspended was not going to be the worst part of his day.

By Daniel Josephs
LIST PRICE $18.99
PRICE MAY VARY BY RETAILER