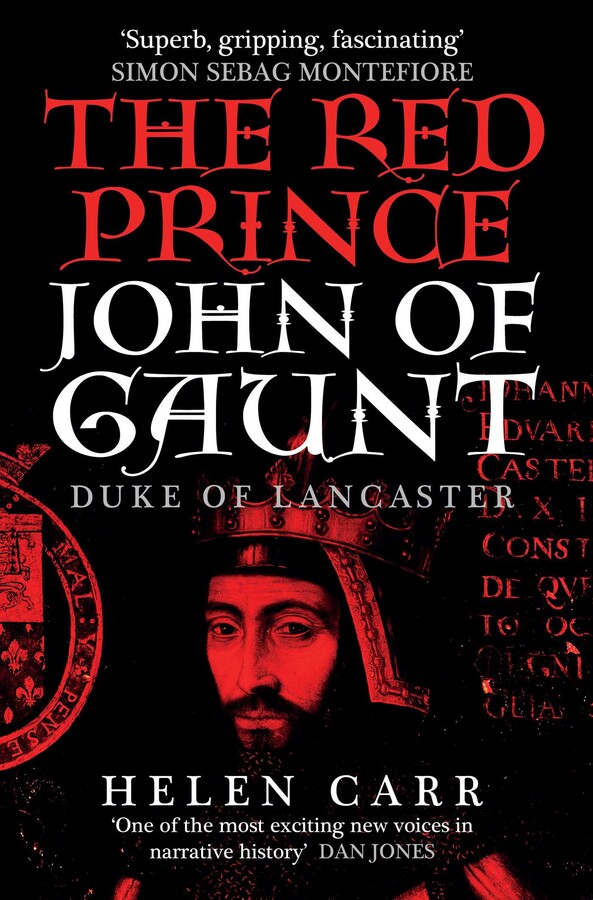 The Life of John of Gaunt, the Duke of Lancaster

A TIMES AND SUNDAY TIMES BEST BOOK OF 2021

‘The Red Prince announces Helen Carr as one of the most exciting new voices in narrative history.’ Dan Jones

Son of Edward III, brother to the Black Prince, father to Henry IV and the sire of all the Tudors. Always close to the English throne, John of Gaunt left a complex legacy. Too rich, too powerful, too haughty… did he have his eye on his nephew’s throne? Why was he such a focus of hate in the Peasants’ Revolt? In examining the life of a pivotal medieval figure, Helen Carr paints a revealing portrait of a man who held the levers of power on the English and European stage, passionately upheld chivalric values, pressed for the Bible to be translated into English, patronised the arts, ran huge risks to pursue the woman he loved… and, according to Shakespeare, gave the most beautiful of all speeches on England.

‘In Shakespeare’s Richard II, John of Gaunt gives the “this scepter’d isle… this England” speech. This vivid history brings to life his princely ambitions and passion.’

‘Helen Carr has captured the drama of [John of Gaunt’s] life and the tensions inherent in it in a compelling portrait. In so doing, she reminds us of the contradictions of a period remote from our own, not just in time but in values and beliefs too… Carr has brought to life one of the major figures of medieval England.’

‘The Red Prince is not…just a book of battles and wars. Carr’s John of Gaunt is a man who loved as passionately as he fought… Carr’s sensitive use of contemporary sources paints a poignant deathbed scene… in The Red Prince it is the towering figure of John of Gaunt, a thoroughly European Englishman, who takes centre stage and it’s a stirring and memorable performance.’

‘Helen Carr is a really exciting new talent in the world of history writing, whose work strikes a perfect balance between lucidity and scholarship. Her debut, The Red Prince, is a beautifully nuanced portrait of an oft misunderstood man.’

‘Superb, gripping and fascinating, here is John of Gaunt and a cast of kings, killers and queens brought blazingly, sensitively and swashbucklingly to life. An outstanding debut.’

‘A long overdue reappraisal of one of medieval England’s greatest but most enigmatic figures. The Red Prince announces Helen Carr as one of the most exciting new voices in narrative history.’

– Dan Jones, author of the Plantagenets and The Hollow Crown

‘Helen Carr is one of the most exciting and talented young historians out there. She has a passion for medieval history which is infectious and is always energetic and engaging, whether on the printed page or the screen.’

‘Deploying vivid and compelling prose alongside her considerable scholarship, Helen Carr fully succeeds in restoring John of Gaunt to his rightful place – in the first rank of medieval princes. This is an excellent book, that brings the fourteenth century back to life through a thoughtful parade of intriguing characters – none more fascinating than John of Gaunt himself.’

– Charles Spencer, bestselling author of Blenheim and Killers of the King

‘John of Gaunt is a name to conjure with – an English duke who sought to become a king in Spain, a complicated, controversial man to whom, as ‘time-honour’d Lancaster’, Shakespeare gives one of his greatest speeches. Helen Carr puts him centre stage: The Red Prince is the rattling good story of a life lived on an epic scale, told with care, insight and humanity.’

– Helen Castor, author of She-Wolves and Joan of Arc

‘Helen Carr tells the gripping story of John of Gaunt’s dramatic and controversial career, from the wars he waged across Europe to the political intrigue and rebellion he faced at home, and above all the way in which his life was marked by profound love, and loss. This is an engaging and moving portrait of one of the leading figures of the Hundred Years War.’

‘This biography explores the motivations of a complex figure who, for years, skilfully moved through a world of chivalry, legislative machinations and enormous wealth… This is a compelling profile of a pivotal figure in English history.’

‘His fame has faded in recent years but Helen Carr’s absorbing new biography returns him to his rightful place.’

’An absorbing biography of one of the great figures of the English past.’

‘[The] opening reference is… typical of the nuances of Carr’s portrayal of an often-misunderstood figure… Carr presents an authoritative account, acknowledging all aspects of a complex character whose devotion to royal privilege was equally a convoluted illustration of his own interests.’

The Life of John of Gaunt, the Duke of Lancaster