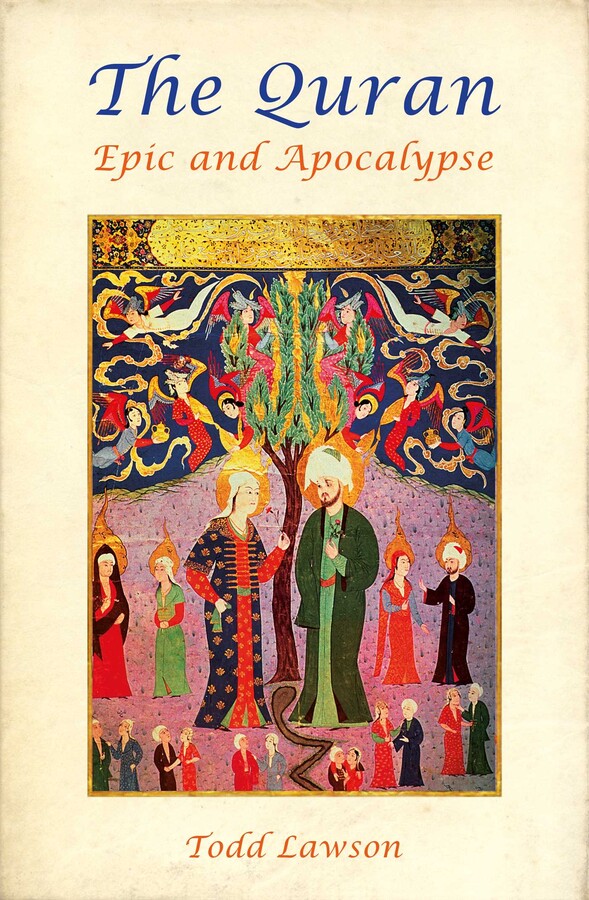 By Todd Lawson
LIST PRICE $18.00
PRICE MAY VARY BY RETAILER

How do people understand the Quran to be divine revelation? What is it about the text that inspires such devotion and commitment in the reader/believer? Todd Lawson explores how the timeless literary genres of epic and apocalypse bear religious meaning in the Quran, communicating the sense of divine presence, urgency and truth. Grounding his approach in the universal power of story and myth, he embarks upon a fascinating inquiry into the unique power of one of the most loved, widely read and recited books in the world.

Todd Lawson is Associate Professor at the Department of Near and Middle Eastern Civilizations, University of Toronto. He is the author of Reason and Inspiration in Islam: Theology, Philosophy and Mysticism in Muslim Thought.

‘Did James Joyce know the Quran? Todd Lawson brilliantly demonstrates how the Quran anticipates literary modernism as both epic and apocalypse. Its epic voice encompasses a vast temporal and spatial canvas – the cosmos, creation, humanity, time, history – while its chapters, singly and collectively, evoke an apocalyptic musicality. The ‘end’, as Lawson reminds us with lapidary prose unfolding insight upon insight, can be instrumental as well as temporal. The apocalyptic vision of the Quran underscores its true ‘end’: to herald and expedite a just community living in accordance with God’s will, enjoying both peace and prosperity. This innovative book charts new ways of reading literary modernism as Quranic commentary on a grand scale…’

‘In this rich and erudite study of the epic and apocalyptic aspects of the text, Lawson adopts and elucidates many of the habits of ancient readers, and the result is a greater appreciation for the Quran’s sweeping aesthetic, literary and spiritual grandeur.’

‘Lawson investigates features of the apocalyptic mode…with great insight and critical sensitivity. He provides at once an appreciation of the Quran’s literary power and a window into the profound religious experience of the Quran’s audience and of early Muslims.’

‘Infuses the field of Quranic Studies with a breath of fresh air. An engaged academic, Todd Lawson demonstrates through his scholarship the Quran’s own self-disclosure as a revelation that is open to all humanity. The avenues of interpretation that the work opens up have the potential to occupy generations. Not only does Lawson’s contribution show how both Muslims and non-Muslims can participate meaningfully in reading the Quran, the work is a vivid reminder of a prophetic saying on the virtues of the Quran: its wonders will never cease, and scholars will never be satiated by its study.’

‘The Quran, Epic and Apocalypse offers numerous fresh and important insights regarding Islam’s most sacred text. Grounded in meticulous analysis of the Quran’s religious and literary dimensions, this volume takes an entirely new direction in identifying and studying its epic and apocalyptic qualities. It is a must-read for anyone interested in comparative religious studies, or indeed in cultural and literary history.’

– Sebastian Günther, Professor and Chair of Arabic and Islamic Studies, University of Göttingen

‘By attending to the Quran’s epic as well as its apocalyptic voice, Todd Lawson proposes to liberate Western readings of Muslim scripture from their current obsessions. It is difficult to imagine a timelier or more necessary scholarly intervention. And when the Quran finally acquires the audience it deserves, i.e., one capable of bracketing theological pre-commitments (pro or con) and appreciating it for the re-visionary work of…literature that it is, Professor Lawson’s book will be recognized as a major contribution towards that long overdue cognitive shift.’

By Todd Lawson
LIST PRICE $18.00
PRICE MAY VARY BY RETAILER