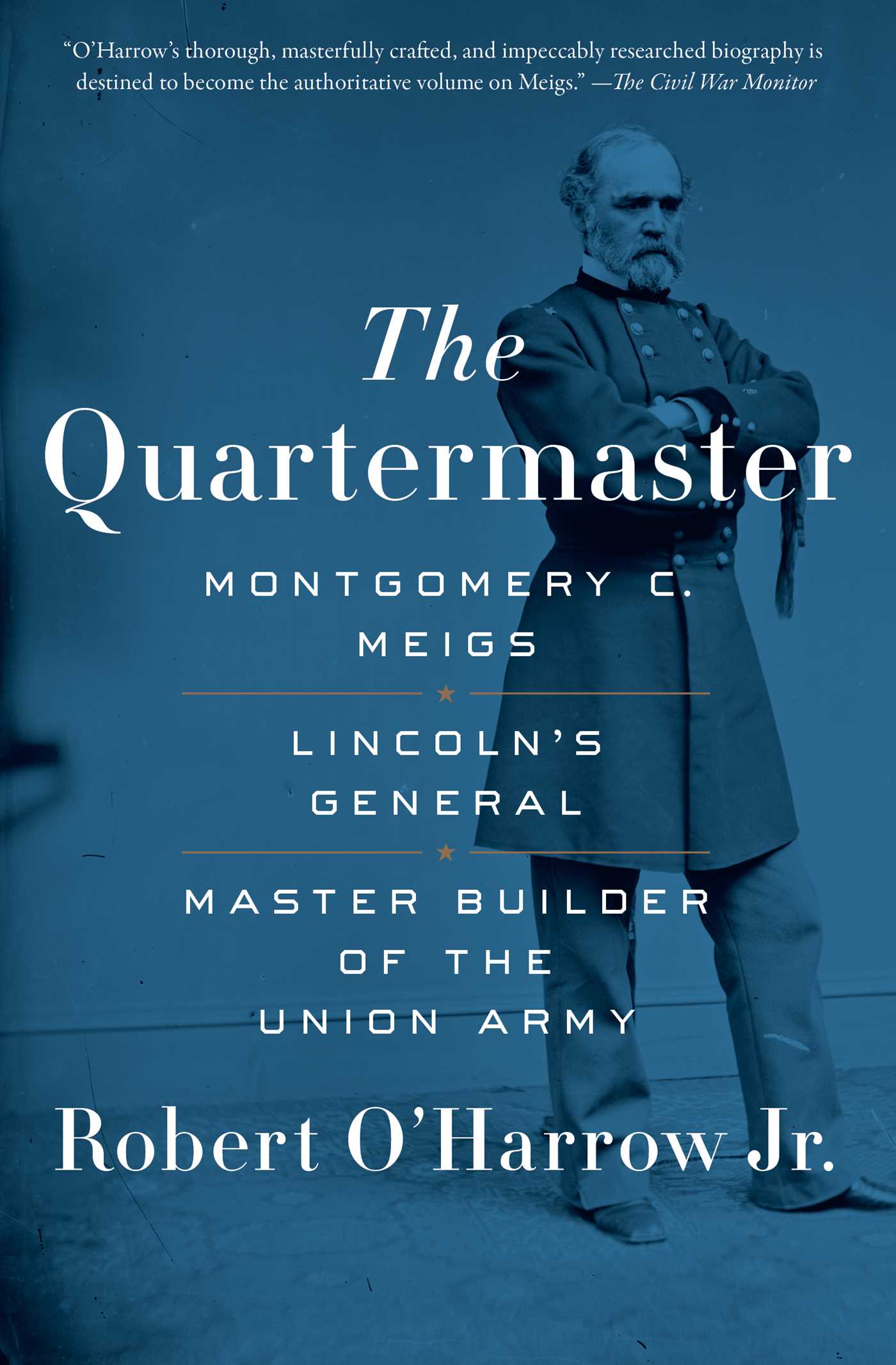 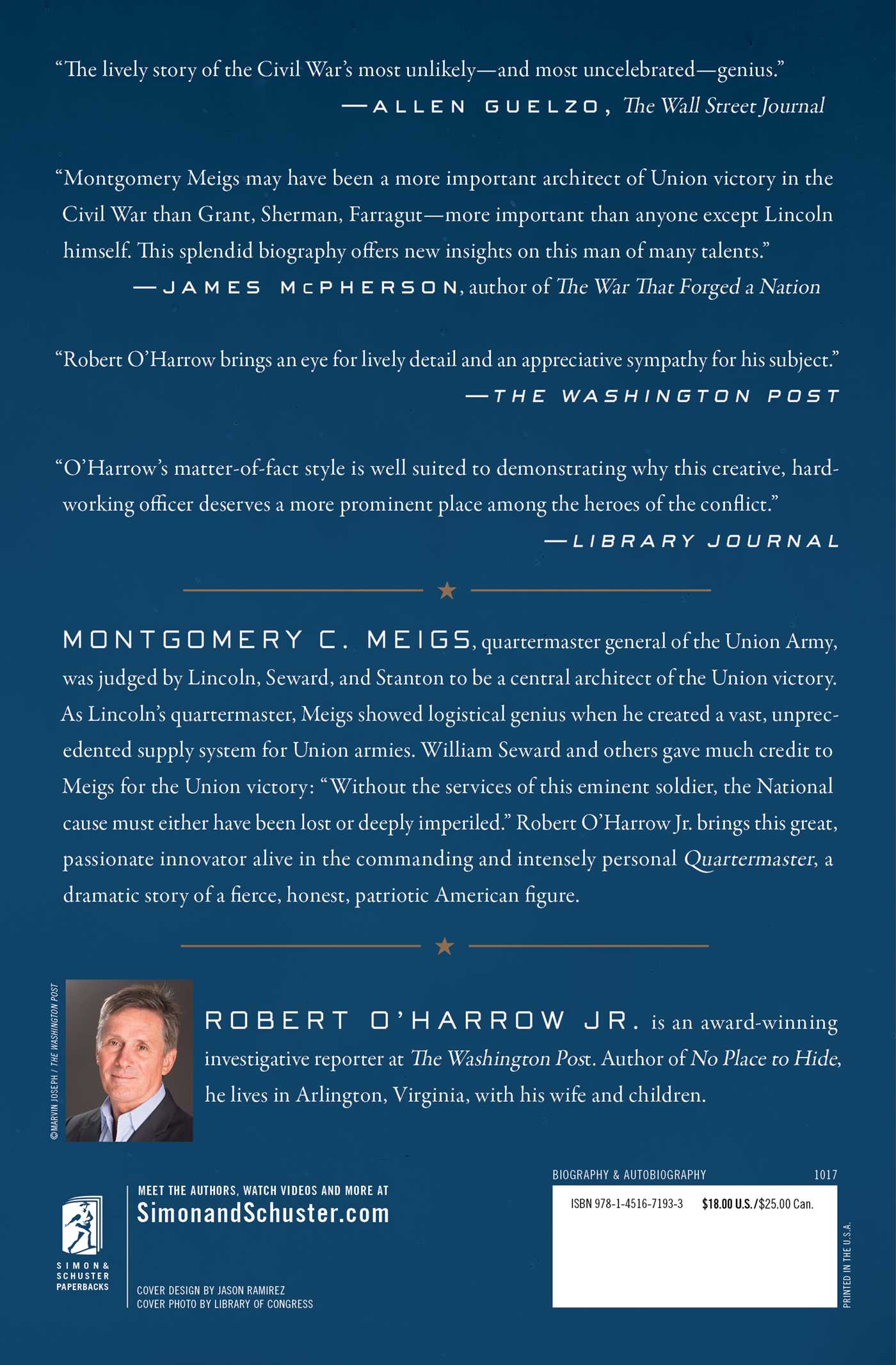 “The lively story of the Civil War’s most unlikely—and most uncelebrated—genius” (The Wall Street Journal)—General Montgomery C. Meigs, who built the Union Army and was judged by Abraham Lincoln, William Seward, and Edwin Stanton to be the indispensable architect of the Union victory.

Born to a well-to-do, connected family in 1816, Montgomery C. Meigs graduated from West Point as an engineer. He helped build America’s forts and served under Lt. Robert E. Lee to make navigation improvements on the Mississippi River. As a young man, he designed the Washington aqueducts in a city where people were dying from contaminated water. He built the spectacular wings and the massive dome of the brand new US Capitol.

Introduced to President Lincoln by Secretary of State William Seward, Meigs became Lincoln’s Quartermaster, in charge of supplies. It was during the Civil War that Meigs became a national hero. He commanded Ulysses S. Grant’s base of supplies that made Union victories, including Gettysburg, possible. He sustained Sherman’s army in Georgia, and the March to the Sea. After the war, Meigs built Arlington Cemetery (on land that had been Robert E. Lee’s home).

Robert O’Harrow Jr. is an award-winning reporter on the investigative unit at The Washington Post. O’Harrow is the author of No Place to Hide, Zero Day: The Threat in Cyberspace, and The Quartermaster, a biography of Montgomery C. Meigs. He was a contributor to the 2016 biography, Trump Revealed: An American Journey of Ambition, Ego, Money, and Power. He lives with his wife and son in Arlington, Virginia.

“Montgomery Meigs may have been a more important architect of Union victory in the Civil War than Grant, Sherman, Farragut—more important than anyone except Lincoln himself.  And before supplying the armies that won the war, he supervised the expansion of the Capitol, including the construction of its new dome, along with the creation of the aqueduct that brought clean water to Washington.  This splendid biography offers new insights on this man of many talents.”

– James McPherson, author of The War That Forged a Nation

“As quartermaster general, Montgomery Meigs was one of the architects of Union victory in the Civil War.  A brilliant engineer and talented organizer, he supplied the troops in the field and on the march, a daunting undertaking.  Relatively unknown in our times, two of his enduring achievements can be seen today—the Capitol dome and Arlington National Cemetery.  Robert O'Harrow, Jr.'s compelling biography of this remarkable man and soldier is rich in details and rightly places Meigs among the major leaders who saved the Union.”

– Jeffry D. Wert, author of The Sword of Lincoln: The Army of the Potomac

“O’Harrow’s compact and remarkably readable portrait of Montgomery Meigs shows that Lincoln’s Quartermaster, long recognized as a significant player, was an even more fascinating and consequential figure than has been realized.”

“The Quartermaster offers a vivid and eminently human portrait of Montgomery Meigs, the brilliant and principled general whose mastery of supply and logistics on a grand scale contributed decisively to Union victory in the Civil War. Too long overlooked, Meigs deserves a place beside such luminaries as Grant and Sherman, as O'Harrow convincingly demonstrates in this fast-paced, bracing account. This is one of the most important Civil War biographies to appear in recent years.”

– Peter Cozzens, author of The Earth is Weeping: The Epic Story of the Indian Wars for the American West

“O'Harrow's matter-of-fact style is well suited to demonstrating why this creative, hard-working officer deserves a more prominent place among the heroes of the conflict…. This biography of a man who labored tirelessly to secure a fame that would outlive him is recommended for readers interested in American history, the Civil War, and the history of Washington.”

“The lively story of the Civil War’s most unlikely—and most uncelebrated—genius.”

“Robert O’Harrow brings an eye for lively detail and an appreciative sympathy for his subject . . . A former member of Lincoln’s Cabinet remarked that without Meigs’s superb contributions, “the civil war in the United States could not have been prosecuted . . . with the smallest hope of success.” The Quartermaster does much to sustain this judgment, highlighting the centrality of logistics to the Union victory and situating a principal architect of that success near center stage in the compelling national drama.”