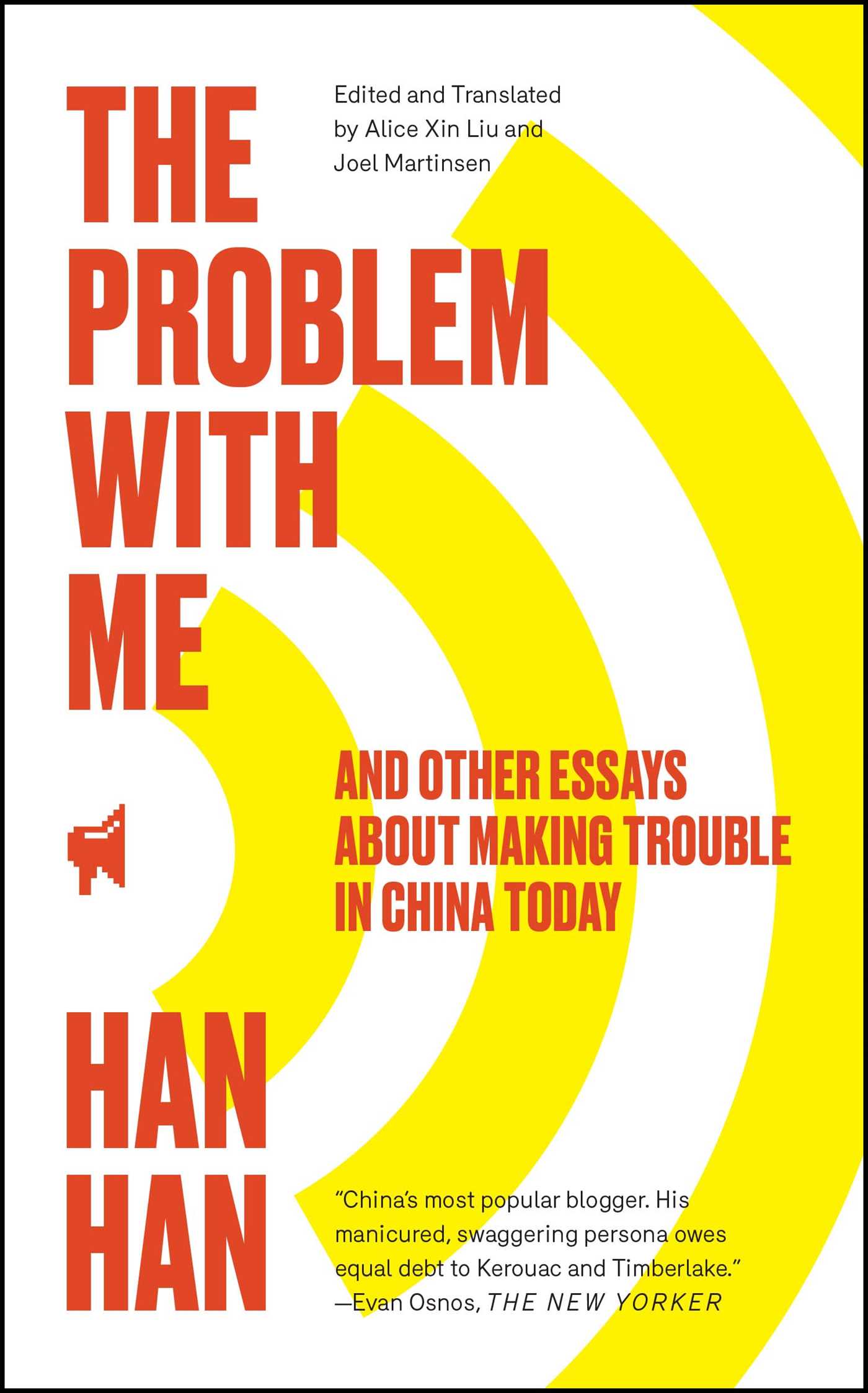 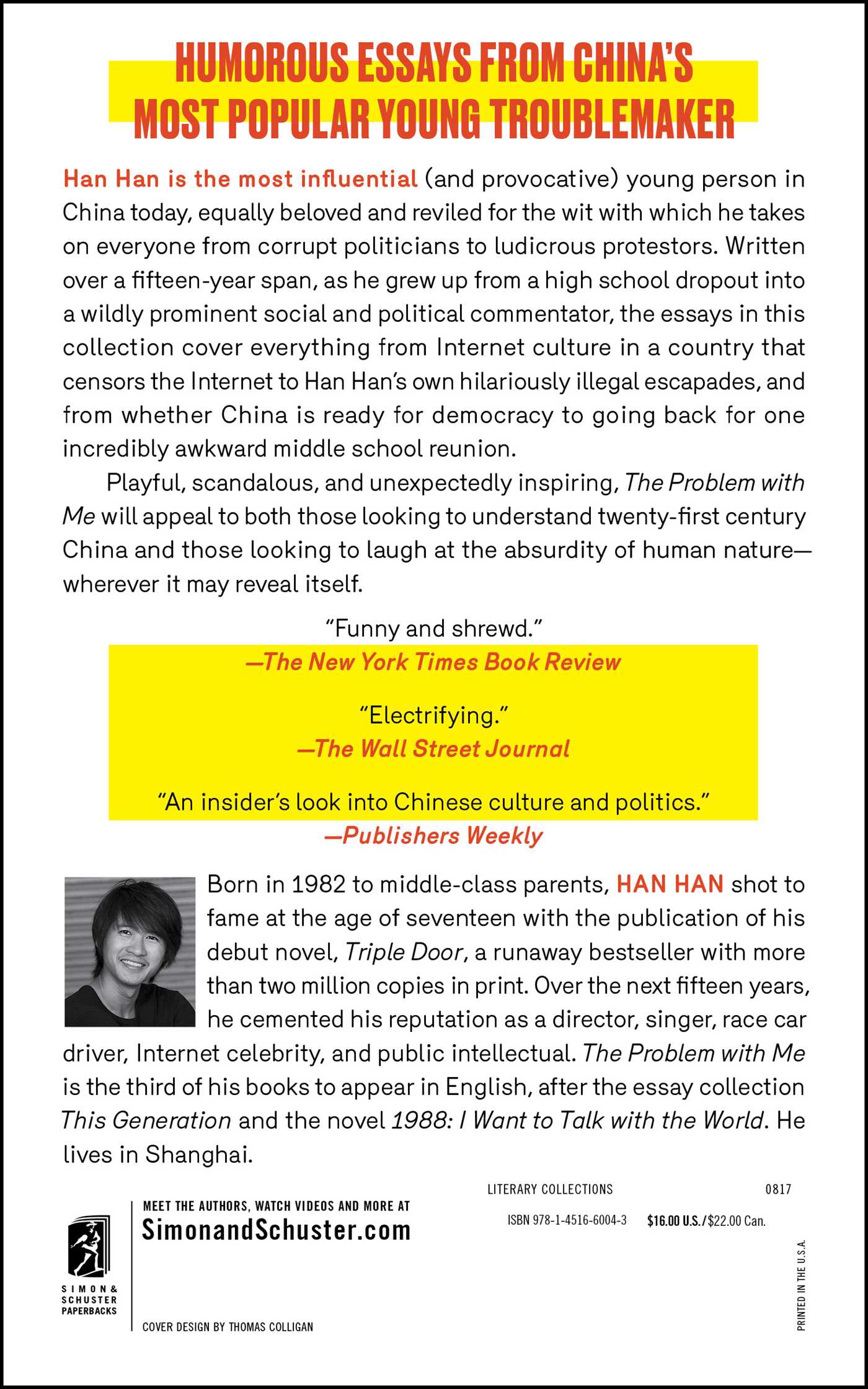 The Problem with Me

And Other Essays About Making Trouble in China Today

By Han Han
LIST PRICE $16.00
PRICE MAY VARY BY RETAILER

Han Han “owes equal debt to Jack Kerouac and Justin Timberlake” (The New Yorker). He’s the most influential (and provocative) young person in China, equally beloved and reviled for the satirical wit with which he takes on everyone from corrupt politicians to ludicrous protesters and everything from Internet culture in a country that censors the Internet to the question of whether China is ready for democracy. “Evocative and funny” and “occasionally electrifying” (The Wall Street Journal), The Problem with Me provides “an insider’s look into Chinese culture and politics” (Publishers Weekly).

The Problem with Me WANG SHUO
January 2007

The journalists were rookies. “Wang Shuo said the post-’80s generation is a bunch of so-and-sos. What do you think?” they asked.

“I wholeheartedly agree,” I replied. “I think so, too.”

There are some very neurotic people in China who have no sense of self-mockery. As soon as something negative is said about their city or their group, they immediately go crazy. I once made some remarks about girls from the Shanghai International Studies University, and all at once a bunch of people went insane. Did they have scholarships from that university, or was it something else? Didn’t they all get there by testing in, and would have ended up elsewhere if they screwed up? Normally, you can say however many negative comments you like in private about your own school or city, but if someone else makes those same comments, for some reason you’ve got to defend your little pile. That’s not honor. That’s stupidity.

If someone makes a negative comment about Chinese car racing, I’d be overjoyed. An outsider says something that we can’t say ourselves very easily. If you’re thinking clearly, you ought to realize how fortunate you are.

Wang Shuo is a writer I really admire. He’s a rare Chinese writer who has actually written decent work. He’s said he’s uneducated, but that’s because he wants to lower himself to the ground floor so he can criticize the people upstairs, and then when there’s an emergency and everyone has to jump out of the building, he’ll be hurt the least. The key thing is that some people don’t get this and think he’s really uneducated. Wang Shuo has made the biggest contribution of any individual to Chinese film and television series. In the Heat of the Sun is the best film—not one of the best, the best—ever made in China. No justification is necessary for the television series. The Chinese are very particular about modesty, but can’t you tell when someone is being overly modest?

When Wang Shuo debates, he almost never mentions his work but argues with his opinions rather than using his novels to shut people up. But so many fucking idiots lay out the line that he’s just making a play for money or groupies. The truth of it is that Wang Shuo expresses his opinions extremely modestly, yet many people come out with all sorts of crazy things. When Wang Shuo says he isn’t educated, he’s already insulting you, but he’s keeping it deeply hidden. Like if Olympic hurdler Liu Xiang said he couldn’t run very fast, he’d really be calling everyone else turtles. Wang Shuo has produced classics—lots of them. In China, someone with awesome work who hasn’t been dubbed a master has got to be good, and regardless of how his next novels turn out, he’s done enough already.

Yet even some “post-’80s” writers think he should “set a literary example, and not act recklessly.” Is this something that a fucking twenty-something writer should be saying? If you didn’t know better, you’d think they were in a government work meeting. For a real writer, recklessness is very important. When you’re so young you should have courage, since, for the time being, society has not yet forced conflict or hardship upon you—but all you’ve learned to write are weak essays on your knees. When the wind rises, you won’t be able to stand straight, and if it keeps blowing, you’ll be reduced to cannon fodder. When I saw those opinions, it was too late for me to pretend I didn’t know the people saying them. Should I help you out just because I was born roughly around the same time as you? Do we have to join the same club? I’ve only heard of people joining the same Party if they happen to have the same aspirations and interests, but I haven’t heard that people born around the same time have to join the same gang. If I’d known that much, I’d have sunk low enough to enroll in college long ago.

So here’s some advice for media outlets with a conscience: Unless Wang Shuo somehow hurts my family or takes my woman, the scene you’re waiting for will never happen. Especially since by that point only a fucking idiot would have time to write an essay. 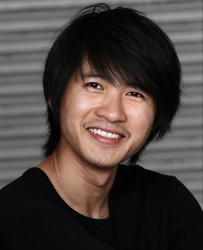 Born in 1982 to middle class parents, Han Han shot to fame at the age of seventeen with the publication of his debut novel, Triple Door, a runaway bestseller with over two million copies in print. Over the next fifteen years, he cemented his reputation as a director, singer, racecar driver, Internet celebrity, and public intellectual. The Problem with Me is the third of his books to appear in English, after This Generation and 1988: I Want to Talk with the World. He lives in Shanghai.

“China’s most popular blogger.... His manicured, swaggering persona is a rebuke to the rumpled archetype of the Chinese intellectual, and owes equal debt to Kerouac and Timberlake.”
— The New Yorker

"Han Han’s writing on every topic combines charming storytelling, wise aphorisms, and serious analysis. This is a groundbreaking book for Anglophone readers, offering an insider’s look into Chinese culture and politics."
— Publishers Weekly

"Han Han’s large readership is the best evidence we have of a broad survival of common sense in China.”
— The New York Review of Books

"Funny and controversial... his personality does shine through."
— Library Journal

"Han Han is a phenomenon of today's China who personifies a rapidly changing society."
— Jonathan Fenby, author of Tiger Head, Snake Tails: China Today, How It Got There and Where It Is Heading

The Problem with Me

And Other Essays About Making Trouble in China Today

By Han Han
LIST PRICE $16.00
PRICE MAY VARY BY RETAILER