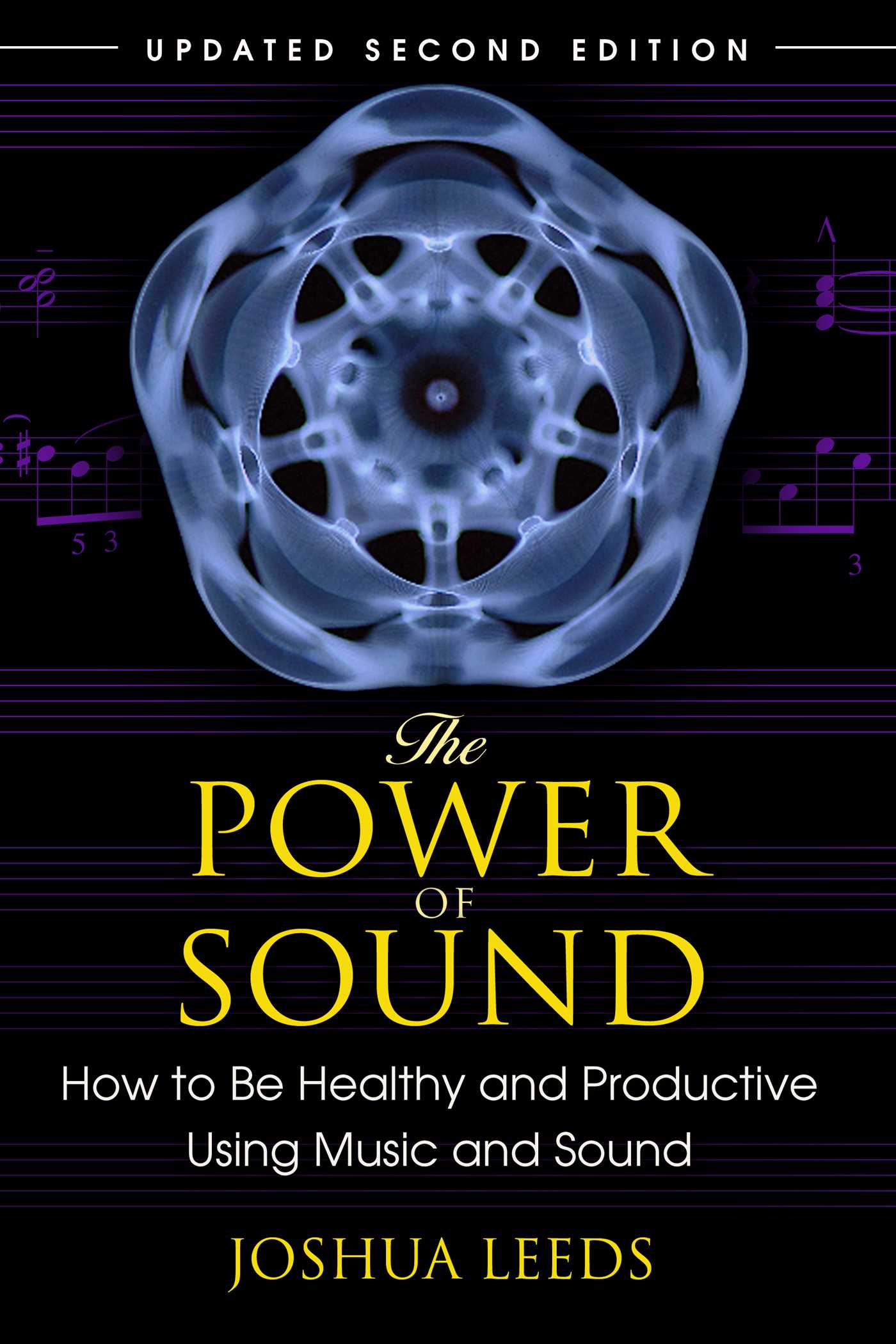 Customize your sound environment for a better quality of life

• Shows how to use music and sound to reduce stress, enhance learning, and improve performance

What we hear, and how we process it, has a far greater impact on our daily living than we realize. From the womb to the moment we die we are surrounded by sound, and what we hear can either energize or deplete our nervous systems. It is no exaggeration to say that what goes into our ears can harm us or heal us.

Joshua Leeds--a pioneer in the application of music for health, learning, and productivity--explains how sound can be a powerful ally. He explores chronic sensory overload and how auditory dysfunction often results in difficulties with learning and social interactions. He offers innovative techniques designed to invigorate auditory skills and provide balanced sonic environments.

In this revised and updated edition of The Power of Sound, Leeds includes current research, extensive resources, analysis of the maturing field of soundwork and a look at the effect of sound on animals. He also provides a new 75-minute CD of psycho­acoustically designed classical music for a direct experience of the effect of simplified sound on the nervous system. With new information on how to use music and sound for enhanced health and productivity, The Power of Sound provides readers with practical solutions for vital and sustained well-being.

Sound is vibratory energy. Sound touches us and influences our emotions like nothing else. It is the stuff of tone and timbre, silence and noise. It is a frequency of vibration that we audibly hear between 20 and 20,000 Hz (cycles per second). We perceive it primarily through our ears, where it is transformed into electrochemical impulses sent to the brain. It is also perceived through the skin. Like air and water, sound is ubiquitous. It can be a great benefit, or it can create problems.

The emerging field of soundwork or sound therapy, different from music therapy, is based on the theory of vibration: how frequency resonates and affects our nervous system. Soundwork is neurological in nature, working with vibrations to create a charge in the brain and nervous system. Through the understanding of what happens to sound once it enters our heads, we can more easily ascertain which sounds actually strengthen us, as well as which frequencies weaken us. The power of sound is often subtle and therefore easily ignored. But it is through this subtlety that sound surreptitiously influences our energy, our health, our ability to stay in balance. As with so many kinds of sensory input--food, aroma, sound, and images--we have a choice as to how and what we ingest.

Ancient cultures knew about the power of sound long before the term science was coined. The spiritually wise men of India knew that the world is sound. From India’s Vedic scriptures come the term Nada Brahman--“the primal sound of being” or “being itself.” Even four thousand years ago, India’s scholars and religious leaders understood that we live in a state of vibration from which sound derives and on which sound has profound influences. Philosophers and prophets of old shared a common belief in the divine origin and nature of sound. In ancient philosophies and religions, sound (vibration) is the lead character in creation myths. The genesis of the universe--or, thinking locally, our planet Earth--is ascribed to the “Word” or the “One Sound.” Egyptians, Hebrews, Native Americans, Celts, Chinese, and Christians all have spoken of sound as a divine principle.

The roots of this belief in the power of sound can be found in the ancient cultures of the Ethiopians, Hopi, and Aborigines, as well as the temples of Greece and Rome. In The Secret Power of Music, however, David Tame states, “Almost three thousand years before the birth of Christ, at a time when the music of European man may have amounted to no more than the beating of bones on hollow logs, the people of China were already in possession of the most complex and fascinating philosophy of music of which we know today.”

The Chinese dynasties compared music with a force of nature and held it in that level of awe. “The Chinese understood the power within music to be a free energy, which man could use or misuse according to his own free will.” The rulers and their philosophers believed that in order for their citizens not to misuse music--and for all to benefit--only the “correct” music could be played. Beyond entertainment, Chinese emperors believed moral influence was the major effect of music that they needed to control. And revere and harness the power of sound they did, for four and a half millennia, until the Ch’ ing dynasty (1644–1912).

Worldwide, powerful shamans cure disease and mental anguish by coaxing evil spirits into leaving their victims through the power of chanting. Today entire villages, from Africa to Alabama to the Arctic, continue to drum, sing, or dance themselves into states of spiritual ecstasy. The entire planet vibrates to the rhythms and sounds of music. No matter how primitive or advanced, music plays an inclusive and vital role in every country. It is an intrinsic part of life: of spiritual ceremonies, social celebrations, child rearing, armies marching off to war, initiations, funerals, harvests, and feast days.

Music strikes a chord within that cannot be expressed easily in words. It soothes and excites us. We resonate with its rhythms, harmonies, and tones. It feels good. What is so deeply familiar about tone and rhythm that we can close our eyes and drift away, trusting we are safe in the timelessness of music’s embrace? I believe the answer to this question lies with resonance and sympathetic vibration.

There is a renewed interest in sound as vibration. An important distinction is the difference between a psychological and a neurological perception. A song or melody associated with childhood, a teenage romance, or some peak emotional experience evokes a memory-based psychological reaction. There is also a physiological response to sounds, however. Slightly detuned tones can cause brain waves to speed up or slow down, for instance. Specially created soundtracks, filtered and gated using sophisticated engineering processes, create a random sonic event and trigger an active listening response, thus toning the auditory mechanism, including the tiny muscles of the middle ear. As a result, sounds are perceived more accurately, and speech and communication skills improve.

Research on the neurological component of sound is currently attracting many to the field of psychoacoustics. A growing school of thought, psychoacoustics--based on the teachings of the French doctor Alfred Tomatis--examines both neurological and psychological effects of resonance and frequencies on the human body. According to Tomatis, the ear’s first function in utero is to govern the growth of the rest of the physical organism. After birth, sound is to the nervous system what food is to our physical bodies: in addition to its critical functions of communication and balance, the ear’s primary purpose is to recharge our nervous system. Food provides nourishment at the cellular level of the organism, and sound feeds us the electrical impulses that charge the neocortex. Thanks to the groundbreaking findings of Dr. Tomatis, we have come to understand the extraordinary power of the ear.
Joshua Leeds

Joshua Leeds is a sound researcher, educator, and music producer with 40 hours of specialized soundtracks used in clinics, classrooms, and animal care facilities worldwide. He specializes in the field of psychoacoustics, the study of the effect of music and sound on the human nervous system, and bioacoustics, how human sound affects other living beings. The author of Through a Dog’s Ear and Sonic Alchemy, he lives in southern Oregon.

“A magnificent addition to the growing body of literature devoted to the newly emerging field of sound therapy by an author who has been instrumental in its development and recognition. Insightful, lucid, and engaging, The Power of Sound is the first important book on sound therapy for the twenty-first century. It should be read by anyone interested in the true nature of music’s potential as a healing modality. Bravo, Mr. Leeds!”

– Randall McClellan, Ph.D., author of The Healing Forces of Music

“An indispensable guidebook to a new awareness of sound and an exceptional resource for personal and professional use. Educators, therapists, and anyone with ears will find Joshua Leeds’s work inspiring and practical as they endeavor to promote learning, performance, and well-being.”

“Joshua Leeds points to the future for the entire music community--musicians, producers, engineers, composers, and businesspeople. I applaud his generosity in sharing the psychoacoustic techniques he has developed and utilized to great effect. In combining music and science, Leeds has achieved a dramatic advance in the use of music and sound for empowerment and change.”

"Used for basic understanding, either for personal or professional use, The Power of Sound is a powerful tool at its best. Leeds, through his thorough research, is giving us a glimpse into another world of music. (By-the-way, the 75-minute CD of psychoacoustically designed classical music is awesome!)"

“In this deep guidebook to everything sonic, Mr. Leeds caters to the layperson and the professional alike. The content is exceptionally well researched and organized. He proceeds in sections that contain the history, theory and also references on the Internet that show the research for readers who want a deeper knowledge.”