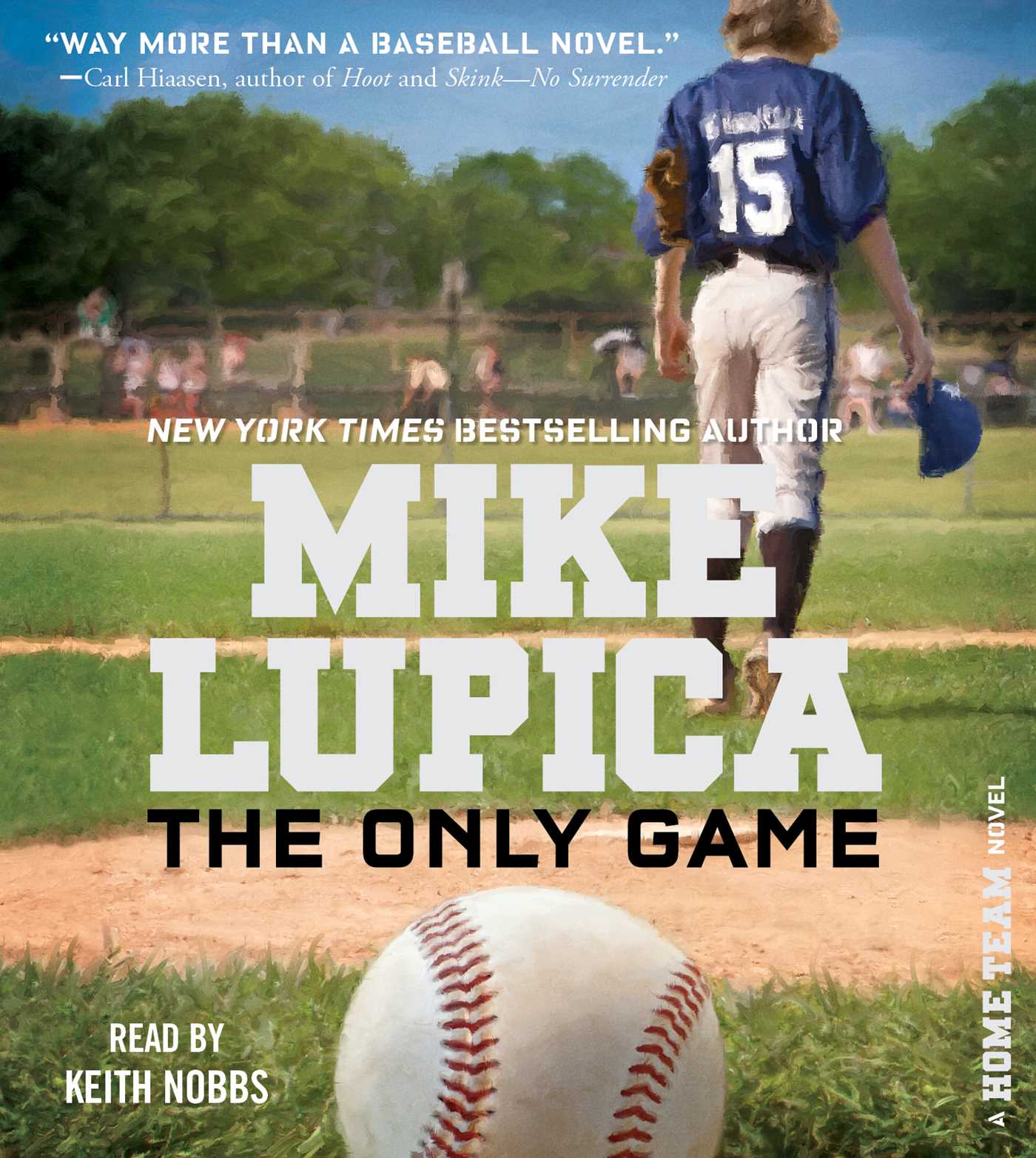 Can a young baseball star maintain his love of the game after the loss of his brother? Find out in this start to the Home Team series about a small town with high hopes, from New York Times bestselling author and sportswriting legend Mike Lupica.

Jack Callahan is the star of his baseball team and seventh grade is supposed to be his year. Undefeated season. Records shattered. Little League World Series. The works. That is, until he up and quits.

Jack’s best friend Gus can’t understand how Jack could leave a game that means more to them than anything else. But Jack is done. It’s a year of change. Jack’s brother has passed away, and though his family and friends and the whole town of Walton thinks baseball is just the thing he needs to move on, Jack feels it’s anything but.

In comes Cassie Bennett, star softball player, and the only person who seems to think Jack shouldn’t play if he doesn’t want to. As Jack and Cassie’s friendship deepens, their circle expands to include Teddy, a guy who’s been bullied because of his weight.

Time spent with these new friends unlocks something within Jack, and with their help and the support of his family and his old friends, Jack discovers sometimes it’s more than just the love of the game that keeps us moving forward—and he might just be able to find his way back to The Only Game, after all.

The Only Game
By Mike Lupica

1. The first chapter ends with a surprise. What hints has the author given in the chapter to show that Jack isn’t simply enjoying his first day of baseball? The reader doesn’t find out that Jack’s brother died until the end of the second chapter. Analyze how the author foreshadows this information in the first two chapters.

2. Jack deals with guilt about his brother’s death by quitting baseball. Describe the role Jack thinks he played in Brad’s death. What does Jack’s decision show about his character? Analyze how the decision affects his life both positively and negatively. Explain why Jack changes his mind about playing.

3. Brad dies before the book opens yet he’s important to the story. How is his character revealed in the book? Analyze the letter he left for Jack, what it shows about Brad, and what it means to Jack. Give examples of what Brad was like as a person and as a brother.

4. Jack admired how Brad never blamed anyone else for his problems. Instead he’d say, “I’m gonna wear it.” Discuss the importance of accountability in the plot. The expression comes up again about Teddy and baseball. How is accountability important in this scene and in sports in general?

5. Cassie, to Jack’s surprise, becomes good friends with him. Describe her character, referring to specifics in the novel. Analyze the observations that “Nobody in the sixth grade wanted to tangle with Cassie Bennett” and that she never did anything halfway. Discuss ways in which she and Jack are similar and different.

6. Describe Jack’s relationship with his father. What role does baseball play in their relationship? What is his father’s attitude toward Jack playing ball and quitting the team?

7. What is Jack’s mother like? Explain why Jack finds it more difficult to talk to her than to his father. How does she show that she loves him and that she understands him more than he realizes?

8. After Brad died, Jack’s mother advises, “One foot in front of the other.” Jack’s surprised when Cassie quotes her mother as saying the same thing. What does the expression mean? When is it especially useful advice to follow? Describe how different characters in the book, including Jack and Teddy, follow this advice.

9. Gus is outraged when Jack quits baseball. Discuss the reasons for his anger and describe how he expresses it. Describe different aspects of Gus’s character and how they are revealed by his actions and comments. How does Gus react when Jack finally explains why he quit the team?

10. Teddy changes a lot in the course of the book. Describe what he’s like early on and what he’s like at the end of the story. How has he changed? What prompted the changes? What about him stayed the same? Discuss why Jack enjoys being friends with Teddy and vice versa.

11. The bridge over the falls turns out to be important in several ways. Describe how Cassie, Jack, Gus, and Teddy each feel about the bridge and crossing it. What do their attitudes tell you about them? What does the bridge symbolize for Teddy? What role does it play in Teddy’s friendship with Jack?

12. Some coaches can make team sports a negative experience for players. Describe Coach John Leonard and why he’s a good coach, pointing to specific dialogue and actions. What is his attitude towards the game and how does he convey it? Give examples of how he treats the players and the message he sends through his behavior.

13. Jack also does some coaching as a volunteer with Cassie’s team. Why does he help? Describe what he does for the team. What does his approach to coaching reveal about his character? What does he learn from coaching and from observing Cassie play?

15. Discuss the book’s title and how the phrase “the only game” is used throughout the book. “People say there’s other games . . . But baseball’s the only game,” Jack says to Cassie, who agrees. It appears many times throughout the novel. Which other characters in the book would agree with Jack and which wouldn’t? Why do you think the author chose it as the title?

16. The novel has a third-person limited omniscient point of view, which communicates Jack’s thoughts and feelings but no one else’s. Analyze why the author chose that kind of narrative. What are the advantages and disadvantages compared to either omniscient or first-person? How would the descriptions of the baseball games have been different if Jack had been narrating the story?

17. Choose one of the baseball games that’s described in detail and analyze how the author builds excitement and suspense. Give examples of how the author uses pacing in these scenes to hold the reader’s attention.

18. The author incorporates expressions from the world of sports into the story. Analyze the following expressions and others in the book, discussing what they mean in general and how they are used in the narrative: “Cassie Bennett played bigger”; “Rub some dirt on it and walk it off”; and “Go big or go home.”

Extra! Extra!
Little League teams as good as Jack’s get coverage in local newspapers, especially in a town like Walton. Have children reread the description of the final championship game and then write a newspaper article about it. They should include information about the tournament, coach, and important players, as well as highlights of the game. They should also name the newspaper and create a headline for the article.

Is It Really the “Only” Game?
Jack and Cassie declare that baseball is “the only game.” Have children prepare and present short speeches in which they agree or disagree with that statement. If they agree, they should articulate reasons that baseball matters to them and to society. If they disagree, they should present another sport, hobby, or extracurricular pastime they consider more important than baseball and why.

Great American Pastime Poster
Baseball has played an important role in America and elsewhere. As a class, brainstorm a list of topics related to baseball and its history. Have pairs of children choose a topic to research using print and online resources. Possibilities include the origin of baseball, the Negro Leagues, the integration of the major leagues, the All-American Girls Professional Baseball League, baseball in other countries like the Dominican Republic, and so on. Have children create a poster that summarizes their research and share the poster with the class.

Map the Major Leagues
Major League Baseball has thirty teams. Have each child or pair of children choose a team and find geographical information about the metropolitan area where the team is based. Put up a large map of North America and have children pin a small flag with the team’s logo at the appropriate city. Have them report back to the class with geographical facts such as population, latitude and longitude, a brief history, and major industries, along with team facts such as when it was established, name of its stadium, and what its uniform looks like.

Guide written by Kathleen Odean, a former school librarian and Chair of the 2002 Newbery Award Committee. She gives professional development workshops on books for young people and is the author of Great Books for Girls and Great Books about Things Kids Love.