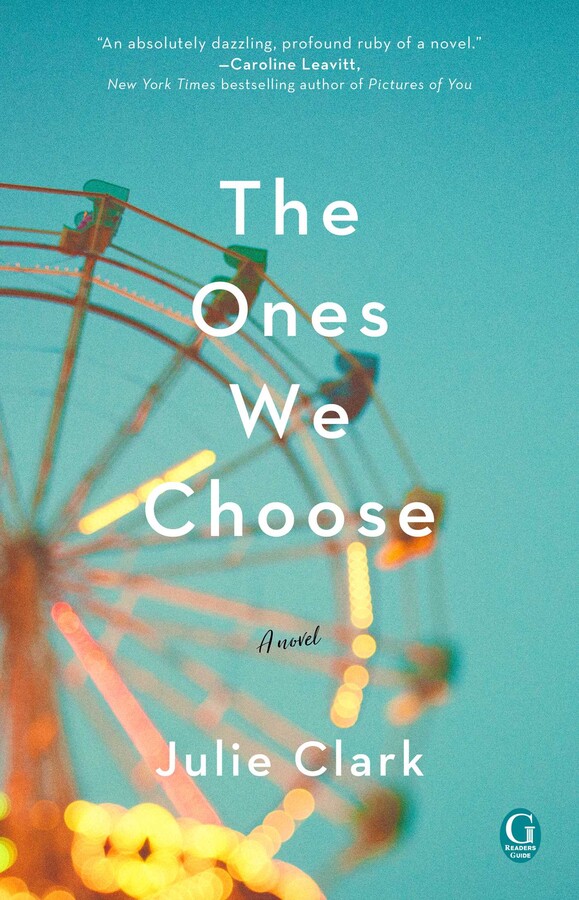 By Julie Clark
LIST PRICE $9.99
PRICE MAY VARY BY RETAILER

Lisa Genova meets 23andMe in this exploration of the genetic and emotional ties that bind, as debut author Julie Clark delivers a compelling read about a young boy desperate to find his place in this world, a mother coming to terms with her own past, and the healing power of forgiveness.

The powerful forces of science and family collide when geneticist Paige Robson finds her world in upheaval: Her eight-year-old son Miles is struggling to fit in at his new school and begins asking questions about his biological father that Paige can’t answer—until fate thrusts the anonymous donor she used into their lives.

Paige’s carefully constructed life begins to unravel as the truth of Miles’s paternity threatens to destroy everything she has grown to cherish. As Paige slowly opens herself up—by befriending an eccentric mother, confronting her own deeply buried vulnerabilities, and trying to make sense of her absent father’s unexpected return—she realizes breakthroughs aren’t only for the lab. But when tragedy strikes, Paige must face the consequences of sharing a secret only she knows.

With grace and humor, Julie Clark shows that while the science is fascinating, solving these intimate mysteries of who we are and where we come from unleashes emotions more complex than the strands of DNA that shape us.

The Ones We Choose by Julie Clark

This reading group guide for The Ones We Choose includes an introduction, discussion questions, and ideas for enhancing your book club. The suggested questions are intended to help your reading group find new and interesting angles and topics for your discussion. We hope that these ideas will enrich your conversation and increase your enjoyment of the book

Abandoned by her father when she was young, geneticist Paige Robson has dedicated her life to pulling apart the science of his choice—discovering a gene that explains why some men stay while others leave. So when she decides she wants a child of her own, she turns to an anonymous sperm donor who will never complicate their lives. Now, nine years later, Paige loves Liam, a man with a big heart and a steadiness that makes her want to set aside her past and build a family of three with him.

But moving forward is more complicated than she expected. Her son, Miles, is desperate to know his biological father and views Liam as nothing more than a stand-in for the real thing. Paige feels trapped, unable to make either of them completely happy.

When fate thrusts Miles’s donor into their lives, Paige is shocked to discover he’s already connected to them in ways she couldn’t anticipate. Paige fears that revealing his true identity may do more harm than good and decides to say nothing. But when tragedy strikes, she must face the consequences of keeping a secret only she knows.

1. When Paige tries to get Miles to go on the dads’ campout with Liam, Miles expresses his desire to know his genetic father. Up until this point, Paige has been able to handle her son’s questions about his conception. What has changed? Is it just the campout? Or is the development of Miles’s desires something Paige didn’t anticipate?

2. Paige meets Jackie and Aaron at parents’ night at Miles’ school. Paige says the PTA mothers make her feel inadequate. What is different about Jackie? Paige is always worried about Miles having a friend, but why is it important that she herself have one?

3. Paige feels torn between giving Liam what he wants and making sure Miles is happy. Is that a dichotomy of her own construction? When Liam breaks up with her, he tells her Miles is “never going to let me in because you’ve taught him he doesn’t have to.” Is that a fair point? Or, since Liam knew Paige’s history with her father, could he have approached her fears in a different way?

4. The reader is put in Paige’s shoes when her father doesn’t show up to have lunch with her and Rose. Does this make you more understanding of her position that neither she nor Miles will have anything to do with him, despite the fact that he is dying? She takes a harsh line that only Jackie supports; is it a fair reaction to someone responsible for a lot of emotional damage?

5. Both Paige’s mother and sister want Paige to have contact with her father before he dies. Her mother wants Paige to grant him forgiveness, saying it “doesn’t mean forgetting. . . . It means understanding what happened, looking beyond your version of the past and seeing things from someone else’s perspective.” What events lead to Paige finding this version of forgiveness?

6. Rose is blunter with Paige. She says, “This isn’t about forgiving Dad or even having a relationship with him. It’s about not hating him when he dies.” Is this different from what their mother was trying to say? Why is finding this place so important for Paige as a daughter, mother, and possible life partner?

7. Paige’s father is the one to show her how similar they are to each other. Do you think her work on the genetics of emotional detachment has blinded her to the power of learned behavior?

8. Bruno understands why this gene study is important to Paige both professionally and personally. He calls her out when she asks Jenna to make extra visits to Scott, which could compromise their work. Were you surprised she then took an even bigger risk by using her lab to test Aaron’s DNA? She says the mother in her won out over the scientist. Were you comfortable with this justification?

9. Paige does not mean to tell Aaron he is Miles’s father, but blurts it out in her frustration that he won’t get tested for Huntington’s. Do her rights as a mother trump his rights as the actual owner of his genes? What emotional consequences does her revelation have? How are they compounded by Aaron’s death?

10. How do you feel about Paige’s decision not to share her secret with Jackie? When Jackie does find out, does Paige’s explanation seem reasonable? Does her letter to Jackie do a better job of explaining all of her motives? Do you understand why Jackie cannot forgive her?

11. Although Liam decides to give Paige a second chance, it’s hard earned. Liam says, “It’s not that I don’t want to believe you; it’s that I can’t. Not yet.” Is this a satisfying response? Is it true to their characters?

12. When Paige visits her father’s deathbed, she sees her mother and feels guilty that she hasn’t been a more supportive daughter. According to Rose, Paige used to be the bravest person she knew. What changed for Paige after she herself became a mother? Do you think motherhood makes you more brave or less?

13. The chapters are preceded by short informational pieces about genetics. The final two pages are about epigenetic inheritance. It notes that even if we don’t get to hear family stories, our ancestors are genetically “carried forward, a quiet memory of people long since forgotten.” Why is it so important that Paige and Miles understand both their fathers’ genetics and their stories?

1. Has anyone in your group used the websites 23andme.com or ancestry.com? If so, have members share what they gained from the experience. If not, consider using one after reading this book. Ancestry.com offers but does not require DNA testing; 23andme.com is based entirely off genetic information. Does Paige’s story affect your preference for using one or the other?

2. Although Jackie does not forgive Paige, she gives her the beautiful gift of a photo album of Aaron’s childhood. As the child of a sperm donor, this is a very unique connection that Miles will have to his genetic father. Does it make you feel any differently about the photo albums you might currently have of your family? Create a photo album of your own dedicated to connecting the generations and share it with the group.

3. Paige uses A Night of Asian Fusion to reconnect with Liam. This worked well for the characters, so why not try it with your club? Find a cooking class in your area and sign up with members of your group. If a class on Asian food does not appeal to you, try one on creating desserts or another specialty such as Indian cooking or pizza making. 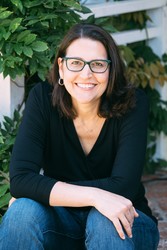 Born and raised in Santa Monica, California, Julie Clark grew up reading books on the beach while everyone else surfed. After attending college at University of the Pacific, and a brief stint working in the athletic department at University of California, Berkeley, she returned home to Santa Monica to teach. She now lives there with her two young sons and a golden doodle with poor impulse control. The Ones We Choose is her first novel.

“How could I not love a debut about science, secrets, DNA, and how the traumas of our ancestors still live within our very cells? With gorgeous prose, and a deep emotional resonance, The Ones We Choose is about the science of love, how our DNA shapes us, and a mother’s fierce battle to protect her son while confronting what really makes our identity ours, what and who we choose to let in, and what and who we don’t.  An absolutely dazzling, profound ruby of a novel.”

"A novel with a wonderfully smart and strong protagonist, Julie Clark's debut The Ones We Choose is an impressive and surprising combination of hard science and raw emotion. In this absorbing story of friendship, parenting, and the intensity of the sibling bond, Clark reveals how messy family life can be and how the mess itself might be of great value. An engaging read!"

"An engaging, heart-felt alchemy of genetics and emotion, THE ONES WE CHOOSE is a unique story that will having you thinking about the true meaning of family and how our heritage silently weaves its way into every choice we make."

– Amy Hatvany, author of Outside the Lines

"This chimera of heart and science skillfully produces an extraordinary breakthrough novel. I love smart fiction with a sharp heroine at the core. Julie Clark has perceptively given us that in The Ones We Choose. A story of mother and son and the ties that bind, right down to the marrow. Trust me, you're going to want to read this."

"A unique marriage of love and science, Julie Clark’s powerful debut The Ones We Choose proves family is what we make it. Poignant and captivating, this is a read-in-one-sitting story!"

– Karma Brown, bestselling author of The Choices We Make

By Julie Clark
LIST PRICE $9.99
PRICE MAY VARY BY RETAILER