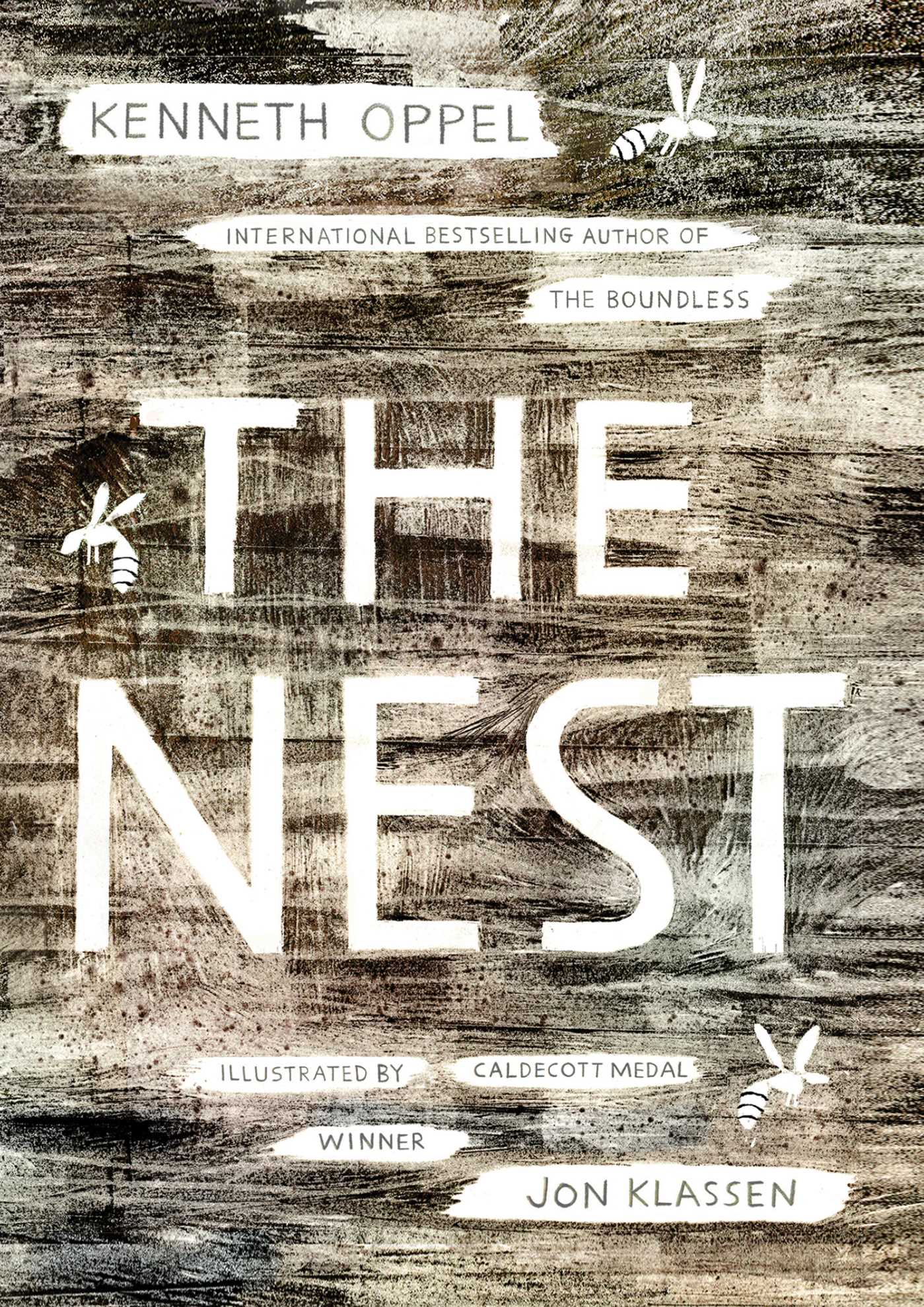 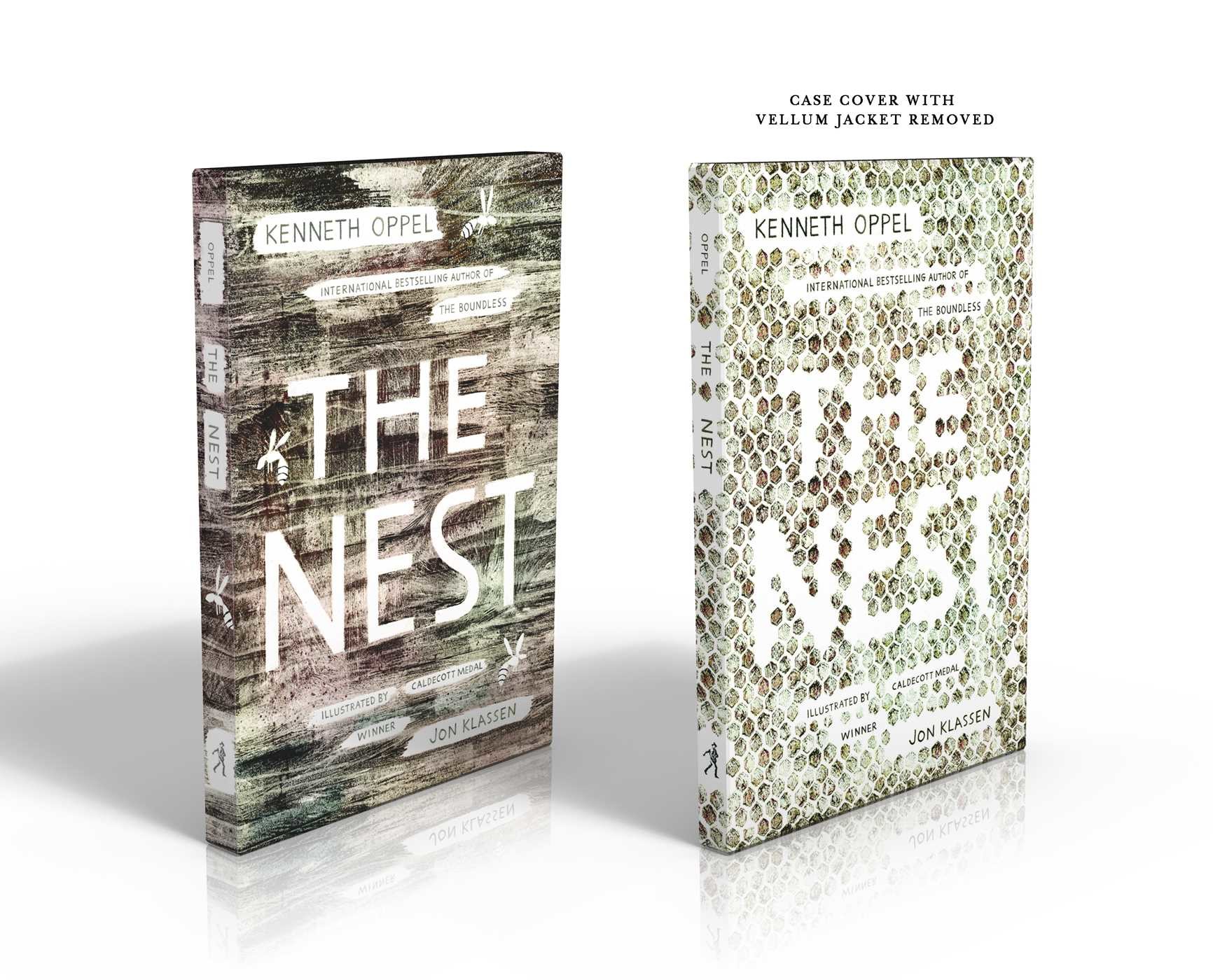 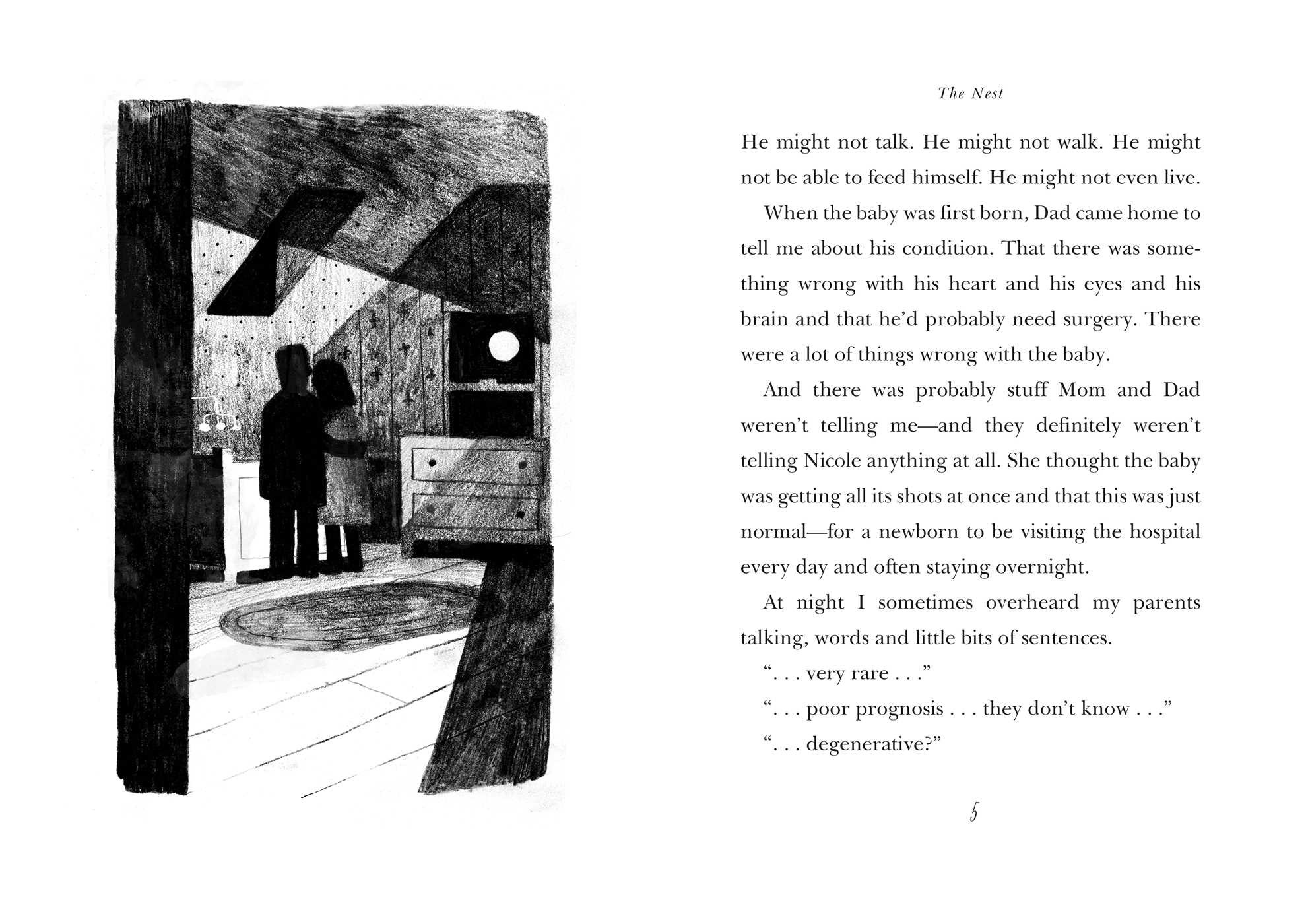 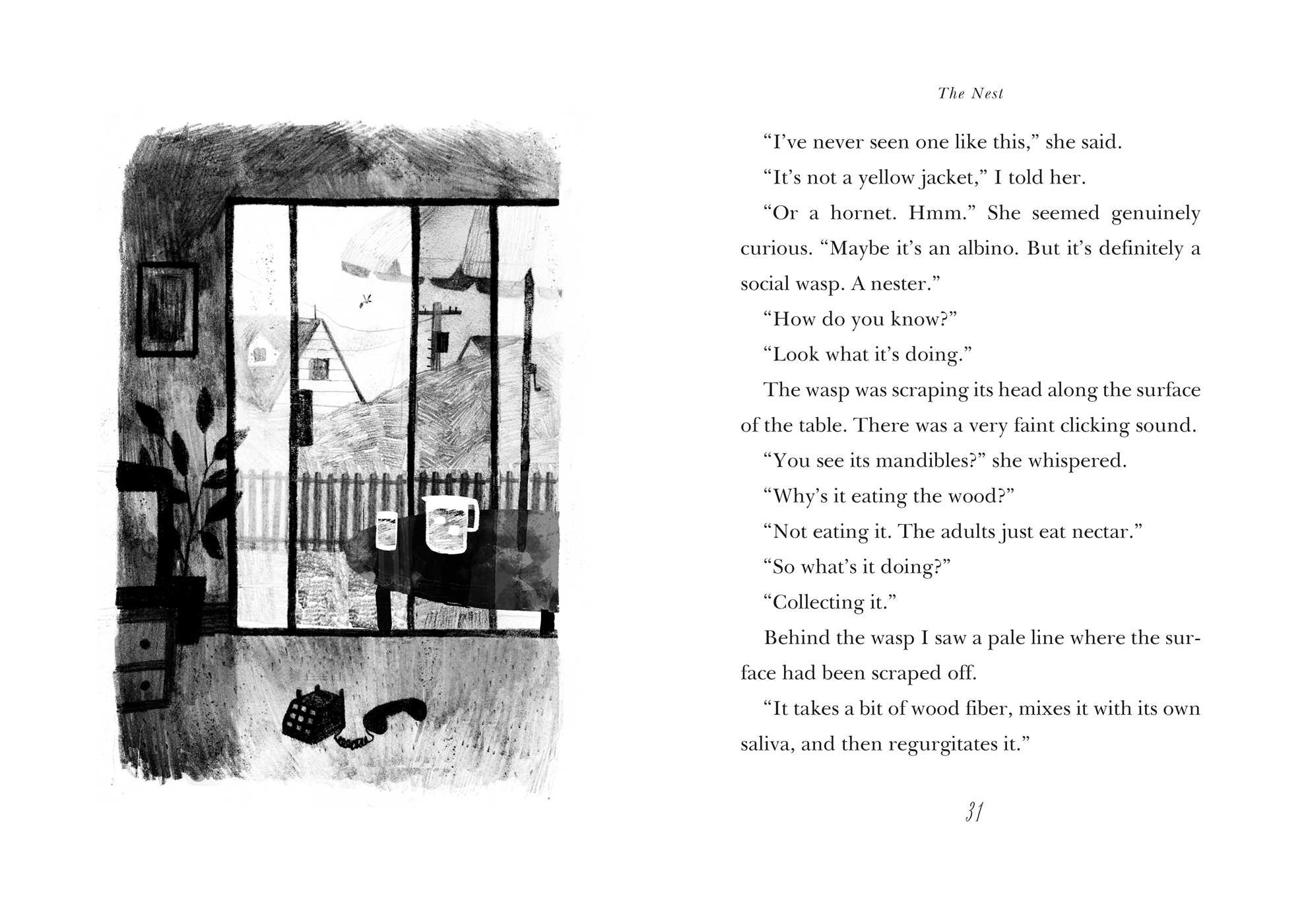 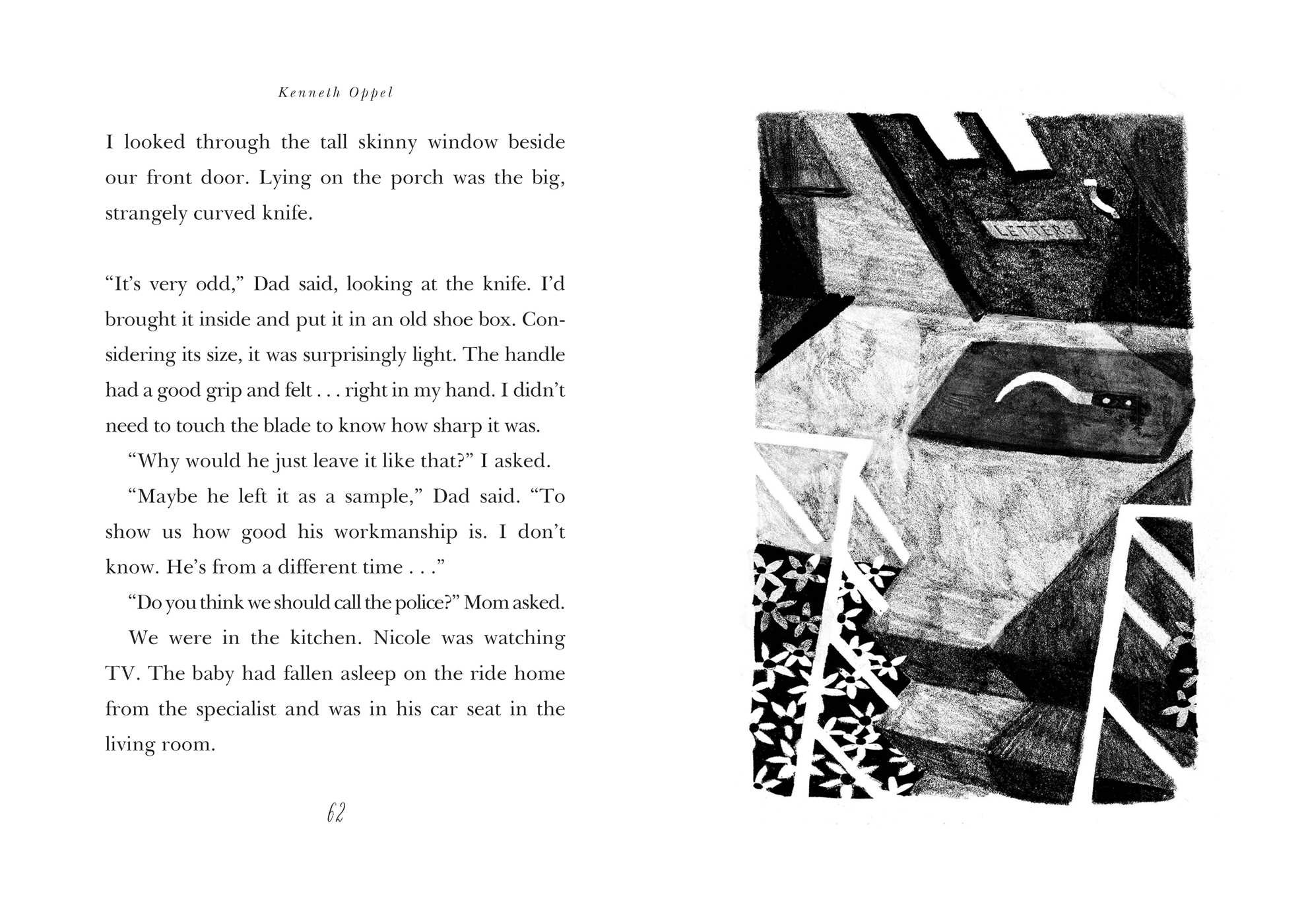 “The Nest leaves a lasting mark on the memory.” —The New York Times Book Review

Steve just wants to save his baby brother—but what will he lose in the bargain? Kenneth Oppel’s (Silverwing, The Boundless) haunting gothic tale for fans of Coraline, is one of the most acclaimed books of the year, receiving six starred reviews. Illustrations from Caldecott Medalist Jon Klassen.

For some kids summer is a sun-soaked season of fun. But for Steve, it’s just another season of worries. Worries about his sick newborn baby brother who is fighting to survive, worries about his parents who are struggling to cope, even worries about the wasp’s nest looming ominously from the eaves. So when a mysterious wasp queen invades his dreams, offering to “fix” the baby, Steve thinks his prayers have been answered.

All he has to do is say “Yes.” But “yes” is a powerful word. It is also a dangerous one. And once it is uttered, can it be taken back?

Celebrated author Kenneth Oppel creates an eerie masterpiece in this compelling story that explores disability and diversity, fears and dreams, and what ultimately makes a family. Includes illustrations from celebrated artist Jon Klassen.


THE FIRST TIME I SAW them, I thought they were angels. What else could they be, with their pale gossamer wings and the music that came off them, and the light that haloed them? Right away there was this feeling they’d been watching and waiting, that they knew me. They appeared in my dreams the tenth night after the baby was born.

Everything was a bit out of focus. I was standing in some kind of beautiful cave, with shimmering walls like white fabric, lit from outside. The angels were all peering down at me, floating in the air. Only one came close, so luminous and white. I don’t know how, but I knew it was a she. Light flowed from her. She was very blurry, not at all human-looking. There were huge dark eyes, and a kind of mane made of light, and when she spoke, I couldn’t see a mouth moving, but I felt her words, like a breeze against my face, and I understood her completely.

Steve loves his baby brother, Theo, but Theo is not well. Steve’s parents take Theo to the hospital almost every day, but they don’t talk to Steve about what is wrong with him. As Steve becomes more worried about Theo, he begins to dream about a wasp queen who says she can fix the baby. Every night the queen comes to Steve in a dream and tells him about events that are going to happen; she reassures him that the baby will be okay.

In the beginning, the queen makes Steve feel better, but, eventually, Steve begins to confuse reality with his dreams. As the situation with Theo’s health intensifies, Steve’s dream world comes crashing down—just as his reality comes into focus.

1. Why does Steve think that the flying insects who come to him in his dreams are angels? What type of insect are they?

2. Why is Steve so worried about his baby brother? What is his concern?

3. Why does Nicole name the mysterious caller Mr. Nobody? Why isn’t the family concerned about the stranger who repeatedly calls them?

4. Why does Steve’s father have to take him to the hospital? What is Steve’s reaction to his experience?

6. How does the queen wasp communicate to Steve? Where is her nest?

7. What does the queen tell Steve about the wasp Vanessa caught in a jar to study? Why does it upset Steve?

8. Why do the wasps swarm Steve when he is on the ladder? Why do they leave him alone once he begins climbing down?

9. How do Steve’s parents react when he tells them about the dreams he is having? What does Steve agree to do?

10. Why does Steve quit talking to his imaginary friend, Henry? What does he miss most about Henry?

12. What does Dr. Brown tell Steve about the dreams he is having? How does that knowledge help Steve when he has another dream?

13. What does Vanessa tell Steve about her own brokenness to try to make him understand that Theo might someday be okay?

14. What emotional issues does Steve possess that have contributed to his confusion between his dreams and reality?

15. What does the queen want Steve to say yes to? If Steve says yes to her, what is he agreeing to do? Why does he feel sad after he says yes?

16. After Steve makes a big deal about destroying the wasp nest, why does he change his mind and decide he wants it to stay there? What does he tell his father?

17. How does Mr. Nobody help Steve? What kinds of things does he say to Nicole? Who is Mr. Nobody?

18. What part of Steve’s dream is reality and what part is a dream? How does Steve finally determine what is real?

19. How does Steve react when the wasps start coming into the house? How does he attempt to keep the wasps out of the house and away from him and Theo?

20. In what ways does Mr. Nobody help save Steve’s and Theo’s lives?

21. How does Steve finally kill the queen? How does she attempt to kill Steve?

22. How is Steve brought back from the dead?

23. How does Steve find reassurance about the reality of his dreams once the exterminator tells him that he has only seen that kind of wasp once, and after Steve finds the fingernail in the remains of the empty nest?

24. How does the title relate to each of the characters in the book? What type of nest does each main character create for themselves?

25. A major theme in the novel is people’s unhealthy obsession with perfection. How does The Nest comment on how we decide, as people, who is worthy of love, and even life?

Have students investigate and list the different types of wasps and their characteristics. Then have students create a chart showing the life cycle of each type of wasp. Underneath the depiction of each stage of the life cycle, students should identify the stage, explain what occurs in that stage, and indicate the time it takes for the wasp to pass from one stage to another. Have students post their charts in the classroom, in science classrooms, or in the school library.

Create a Poster or Brochure

Steve suffers from anxiety and possesses characteristic traits of obsessive compulsive disorder.  Divide students into small groups and assign each group one of the above topics. Have students investigate the symptoms, treatments, and prognosis of their selected medical issue and then write and illustrate an informative brochure or poster to place in the school counselor’s office.

Wasp Nests! How Big Can They Grow?

The wasp nest in Steve’s house is huge, filling fifty garbage bags. Investigate the possibility of a giant wasp nest infesting a house. Have students work with a partner to find an example and to collect information pertaining to the history behind the giant nest and how it was removed. In addition, have students collect as much of the following information as possible: location of the wasp nest, names of people involved in the story, human injuries, and other specifics. Have students work with their partner to write and illustrate a newspaper article about the giant wasp nest and its removal. Students should include as many specifics from the actual situation as possible, but use their creativity to “fill in the blanks,” as necessary. Create groups of eight students each, and have each group share their newspaper articles and post the articles and illustrations in the classroom. 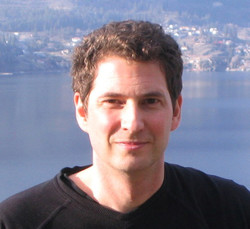 Jon Klassen is a Canadian-born author-illustrator. He has written and illustrated the acclaimed Hat series, including I Want My Hat Back, This Is Not My Hat, and We Found a Hat. Highlights of his illustrated books are Cats’ Night Out by Caroline Stutson, Sam & Dave Dig A Hole by Mac Barnett, The Dark by Lemony Snicket, and The Wolf, The Duck & The Mouse also by Mac Barnett. His books have won a Caldecott medal and two Caldecott honors and other international awards. He lives in Los Angeles, California, with his wife and son.

*"With subtle, spine-chilling horror at its heart, this tale of triumph over monsters—both outside and in—is outstanding....Printz-winning, New York Times best-selling Oppel and Caldecott-winning Klassen are a match made in kid-lit heaven. Expect ample buzz."

* "Oppel uses a dark and disturbing lens to produce an unnerving psychological thriller."

* "a tight and focused story about the dangers of wishing things back to normal at any cost....the emotional resonance is deep, and Steve’s precarious interactions with the honey-voiced queen make one’s skin crawl."

*"Readers are challenged to examine questions about what "normal" is...all in the guise of a fantastical thriller."

"Striking and scary at once...The Nest leaves a lasting mark on the memory, and by the end, Oppel tenderly champions the world of the broken and anxious, the sick and the flawed. Readers will find much to savor here, both scary and subtle."

"A sophisticated horror story...frightening and uncanny but also deeply humane in its probing of the way value may be given to, and taken from, imperfect life."

– The Bulletin of the Center for Children's Books, November 2015

"A quick read, with the right amount of suspense and mystery. ...Recommended."