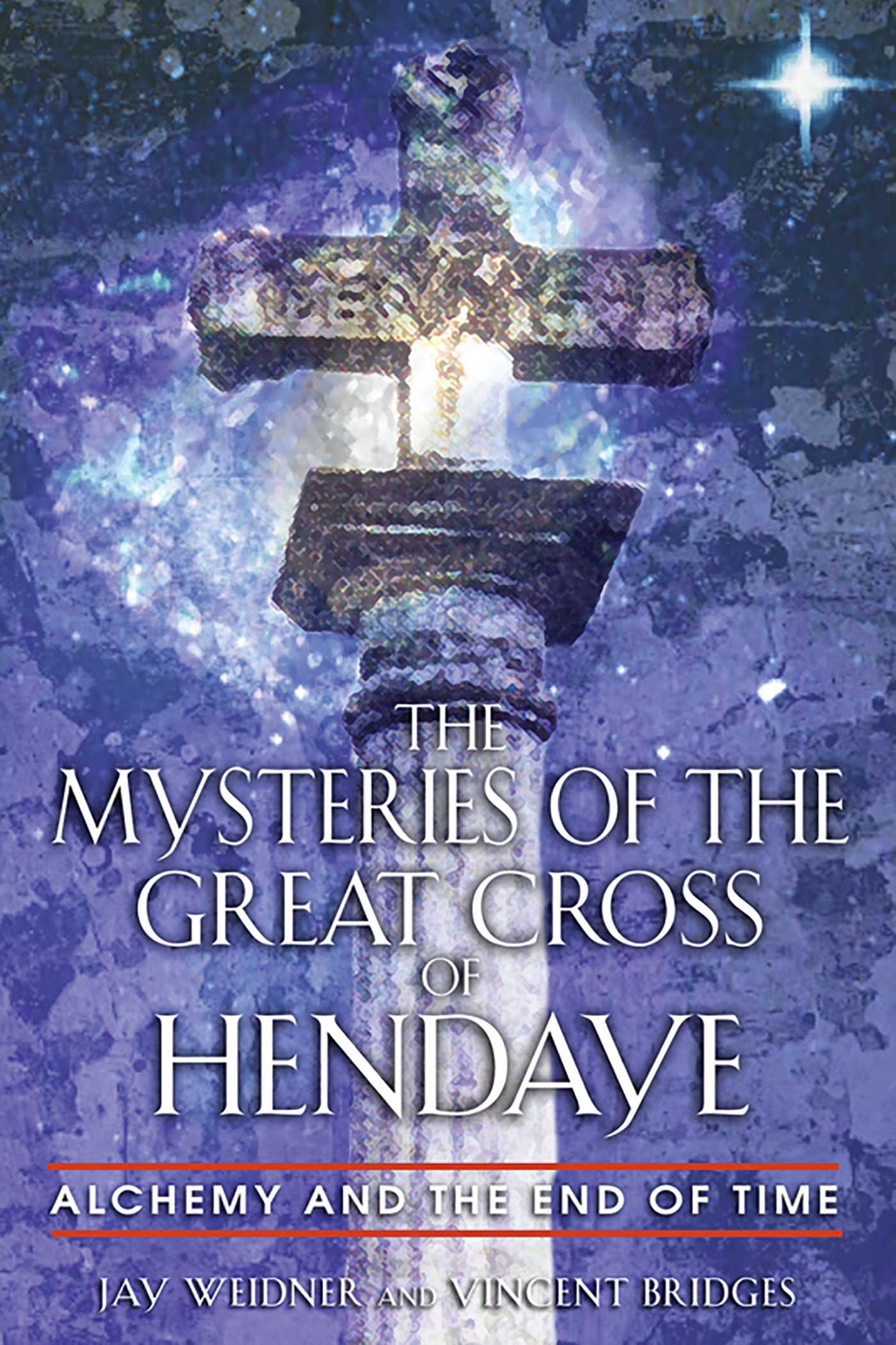 The Mysteries of the Great Cross of Hendaye

Alchemy and the End of Time

By Jay Weidner and Vincent Bridges
eBook
New Edition of Monument to the End of Time Trade Paperback
LIST PRICE $16.99
PRICE MAY VARY BY RETAILER

• Shows how periodic galactic alignments may cause catastrophes on Earth

The Mysteries of the Great Cross of Hendaye reveals one of Western occultism's deepest secrets: The alchemical transformation of base metal into gold is also the transformation of the current Iron Age into the Golden Age. Based on the work of the enigmatic 20th-century alchemist Fulcanelli, authors Weidner and Bridges show how the greatest alchemical secret is that of time itself and that coded into an obscure monument in southwestern France--the cross in the town square of Hendaye--is the imminent date of the apocalypse. The authors' explorations of this symbolism lead them from the cross of Hendaye to the western facade of the cathedral of Notre Dame in Paris, the Pyrenees, ancient Egypt, and the secret origins of Atlantis in Peru, to reveal that we are indeed living in a "fatal season" and that this season is intimately connected to our solar system's alignment with the galactic center. The authors' in-depth examination of alchemy's connection with the coming end days also reveals that this astro-alchemical knowledge was part of the sacred science of the Egyptians and the Atlanteans, whose coded messages are, at last, deciphered to guide humanity to its future destiny.

In the end, the mystery of the Cross at Hendaye, and the secret it was designed to encode, boils down to the message contained in the oddly divided Latin inscription. Fulcanelli instructs the reader that its message concerns a place of refuge from the double catastrophe described by the monument. But how exactly does it tell us this? And does it give us any clue to where this place of refuge might be located?

At this point in our investigation, we had proved that Fulcanelli's assertions of a double catastrophe were viable, and even found evidence linking the cataclysmic process to the inner and outer transformative mechanisms of alchemy. Dr. LaViolette's active ether subquantum kinetics model even resembled Sannella and Bentov's "kindling effect" model for the onset of Kundalini. This suggests that the inner light and the outer light are generated by similar processes.

Everything that Fulcanelli had alleged, no matter how bizarre it sounded on first reading, had been found to be based on truth. There seemed no reason to doubt Fulcanelli’s word on the inner meaning of the inscription's message. However, in the Hendaye chapter, Fulcanelli gives us no clue as to what or where this place of refuge might be. He simply informs us that from the inscription "we can learn that a country exists where, death cannot reach man at the terrible time of the double cataclysm." It is up to us to find it, implying that the inscription does indeed tell us the "geographical location of this promised land." Those who find it, Fulcanelli promises, will take up the mission of renewing mankind after the disaster. Fulcanelli assumes that this elite will be "the children of Elms," that is the followers of the astro-chemical path of transformation. As we will see, this hope may or may not have become reality.

So we are left with the 17 letters of the inscription--OCRUXAVES/ PESUNICA--and Fulcanelli's peculiar comments on it. He begins by telling us that it is easy to recognize the familiar phrase: O Crux Ave Spes Unica, which is translated as "Hail O Cross, the Only Hope." Indeed this inscription is so common as to render any coded phrase within it mean ingless. There must hundreds of thousands of graves in France with this inscription on them. Fulcanelli tells us that this one is different because of the misplaced S.

In telling us exactly how this makes a difference, however, Fulcanelli lapses into obscurity. He calls attention to the incorrect grammar in the second line, even though he knows that including the S on the second line would correct the grammar. As we have seen, Pes, foot or measure, can also be related to unica, the word "only," by transposing the i and the c to form uncia, "the 12th part:' This "measure of the 12th part" can he connected to the cycles of the catastrophe measured by the galactic Cross. Fulcanelli is calling attention to this interpretation with his fudging about grammar. But he doesn't say that this is the reason for the split S, he merely speculates that it was done on purpose. And then he tells us that he already knew the meaning of the inscription from studying the images on the pedestal. This is a clear reference to the cosmic cycles and alignments spelled out on the pedestal, the "measurement of the 12th part." But he wants to show investigators how these "hidden matters" might be solved by "plain common sense, logic and reasoning." In other words, he is posing us a riddle, an intellectual test.

He tells us that the letter S, "which takes on the curving shape of a snake [(note that spes, hope, reversed is seps, or snake)] corresponds to the Greek khi (X) and takes over its esoteric meaning." Just in case we missed this reference to the key or Cross in the sky made by the X of the snakes or dragons, Fulcanelli informs us that "it is the heliocoidal track of the sun, having arrived at the zenith of its curve across space, at the time of the cyclic catastrophe."

Of course, this is only clear if you have made the mental journey outlined in this book. "The heliocoidal track of the sun" is an archaic term for the sun's precessional motion against the ecliptic. Heliocoidal can he translated literally as sun circles, a description of the ecliptic and the slow "suspended" movement of the earth's wobble against it. The zenith of its curve across space is the moment when the solstices cross the galactic axis--the time, according to Fulcanelli, of the cyclic catastrophe.
Jay Weidner

Jay Weidner is an author and filmmaker who has produced and directed documentary films on prominent contemporary figures such as the artist Alex Grey. He lives in Washington state.

Vincent Bridges (1952-2014) was a historian, shamanic therapist, and author who wrote extensively on gnosticism, alchemy, and unsolved enigmas.

– Moira Timms, author of Beyond Prophecies and Predictions

“The authors, by their brilliantly derived mix of alchemy with astrophysics, have breathed new life into the Fulcanelli enigma.”

“It would be impossible to describe or even summarise the staggering amount of information in this book. The material covers vast areas of Western occult knowledge, some parts of which have almost been lost to the genuine seeker. . . . A highly recommended book.”

". . . [This book] is packed with very clear 'indications' towards the secrets of life. . . . concise expressions of the significance of alchemy and cosmology. Anyone who is interested in the Knights Templar, Holy Grail, Christian Mysticism, Immortality and being alive in the first place should certainly read this book."

"A good book, worthy of reading, and if the authors are right, either sell your bonds, or don't worry about peak oil, credit card rates, or terrorism, as the End of Time is near."

The Mysteries of the Great Cross of Hendaye

Alchemy and the End of Time

By Jay Weidner and Vincent Bridges
eBook
New Edition of Monument to the End of Time Trade Paperback
LIST PRICE $16.99
PRICE MAY VARY BY RETAILER