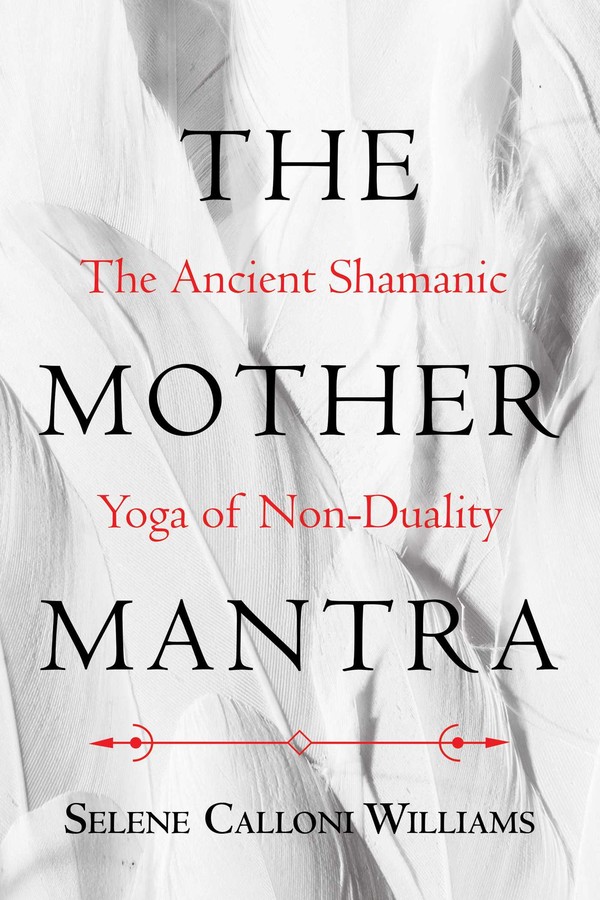 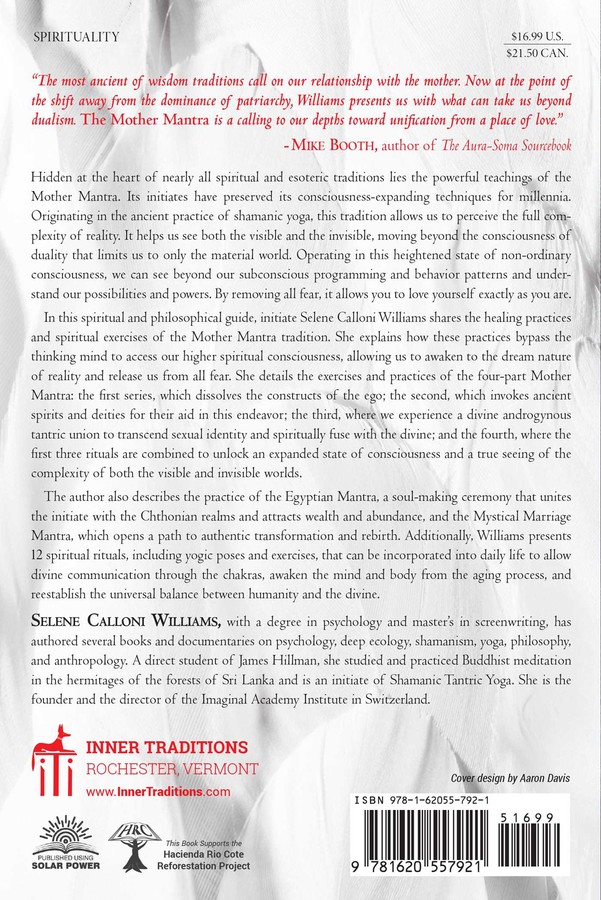 The Ancient Shamanic Yoga of Non-Duality

An initiate’s guide to the healing practices, spiritual exercises, and secret rites of the Mother Mantra tradition

• Explains the practice of the Mother Mantra, which allows us to overcome subconscious programming, release our fears, and awaken to the dream nature of reality

Hidden at the heart of nearly all spiritual and esoteric traditions lies the powerful teachings of the Mother Mantra. Its initiates have preserved its consciousness-expanding techniques for millennia. Originating in the ancient practice of shamanic yoga, this tradition allows us to perceive the full complexity of reality. It helps us see both the visible and the invisible, moving beyond the consciousness of duality that limits us to only the material world. Operating in this heightened state of non-ordinary consciousness, we can see beyond our subconscious programming and behavior patterns and understand our possibilities and powers. By removing all fear, it allows you to love yourself exactly as you are.

In this spiritual and philosophical guide, initiate Selene Calloni Williams shares the healing practices and spiritual exercises of the Mother Mantra tradition. She explains how these practices bypass the thinking mind to access our higher spiritual consciousness, allowing us to awaken to the dream nature of reality and release us from all fear. She details the exercises and practices of the four-part Mother Mantra: The first series, which dissolves the constructs of the ego; the second, which invokes ancient spirits and deities for their aid in this endeavor; the third, where we experience a divine androgynous tantric union to transcend sexual identity and spiritually fuse with the divine; and the fourth, where the first three rituals are combined to unlock an expanded state of consciousness and a true seeing of the complexity of both the visible and invisible worlds.

The author also describes the practice of the Egyptian mantra, a soul-making ceremony that unites the initiate with the Chthonian realms and attracts wealth and abundance, and the Mystical Marriage Mantra, which opens a path to authentic transformation and rebirth. Additionally, Williams presents five spiritual rituals, including yogic poses and exercises, that can be incorporated into daily life to allow divine communication through the chakras, awaken the mind and body from the aging process, and reestablish the universal balance between humanity and the divine.

The Four Movements of the Mother Mantra Tradition

Second Movement: Taking the Spirits with Oneself, the “Hunt for the Soul”

This is a shamanic method practiced by the shamans in Siberia and Mongolia who believe a man will lead a hard life until he takes his spirits with him. The most powerful expressions of the soul are the spirits, the so-called power images, which are:

In this method of taking the spirits with oneself, a psychic formula of the imaginal creation is repeated. It is simple, yet extremely effective if used with awareness and knowledge. The formula for taking the spirits with you consists in knowing how to talk to the spirits, the gods, who are the engine of the images. It simply means to say to them, “Come with me,” but in full awareness and with impeccable knowledge of what one is doing.

Thinking of your forefathers while contemplating a photograph or when in the places they lived or when handling objects they have left, say to them, “Come with me.” If you repeat this psychic formula inwardly, you will soon be pervaded by a feeling of peace, because taking your ancestors with you means to appease their spirit.

In an imaginal vision, the ancestors are powerful images projected by the psyche and they should be thought of in a depersonalised manner, not as individuals but as dreams the soul uses to accomplish its mission. The ancestors are not to be judged, but reabsorbed, like all symbols.

Sacred places or places of power, where the natural energy is expressed in all its potential, are full of spirits to be taken with oneself. The method is to turn to the rivers, the lakes, the seas, the mountains, the plants, and the animals we come upon when we walk in the midst of nature and say to them, “Come with me!” Taking with you the spirits and guardians of nature certainly does not mean moving them from where they are, yet it does, at the same time, mean taking them away with you. This may seem contradictory for the mind, but it is perfectly acceptable for those who can see the complexity. That which can’t be true for the mind is true for nature, which is a complex image.

Repeating the psychic formula inwardly and turning to the most powerful images of nature that can be projected by your soul, you will be pervaded by an intense feeling of joy, which is triggered by the awareness of non-duality. Even though you and the images are one single reality which self-projects, one single soul which self-manifests, you are nevertheless distinct: you are distinct but not separate. The principle of non-duality, also known as advaita dualism, is a fundamental principle of complexity. According to this principle--even though the other is non-existent, because everything is one--you are never alone, because everything is two in one and, considering that this state of non-duality is love, it releases pleasure and joy.

The strongest emotional events of your life such as the emotional turmoil of your birth and traumatic events such as accidents, illnesses, and mourning, but also weddings, pregnancies, sudden intense understandings, moments of well-being, and the emotions tied to your most meaningful recurring dreams all harbour spirits, deities, genies, demons, and demonesses of great power. Beyond good and evil, and without distinguishing the good events from the bad, fearlessly take all of these energies with you, repeating the psychic formula of the imaginal creation, “Come with me!” all the while remembering the events that brought those emotions and images to you. This enables you to feel whole, complete, and allows you to relate to every part of your being, to every aspect of your soul and body, with love. It is a privilege to be true to oneself, without feeling regret for moments past and for choices made.

The gods, who reside in the world of invisibility, love to visit you wearing the masks of the characters, animals, and even places in nature (mountains, rivers) or events (flying, falling) that appear in your dreams. So, dreams are privileged places for “dream-hunting.” The term dream-hunting refers to a Siberian and Mongolian shamanic practice by which the “runaway” soul is “captured” or “restored.”

The method for the reabsorption of dreams entails staying in bed a few moments after waking up, recalling the images of our dreams, and saying to the most meaningful images we can remember, “Come with me!”

Carrying the dream images with us throughout the day builds up a progressive process of dis-identification, distancing one from one’s own “I,” which leads to the creation of the “witnessing I.”

The “witnessing I” is an aspect of awareness capable of observing the “I” from the outside, not falling prey to its calculating mind-set bent on control or to its fears and conditioning by the categories of imposed social values. The “I” is always in a frenzy between fear and calculation, between the sense of good and bad, personal pros and cons, and doesn’t understand that it is being manipulated. Its emotions are substantially fear, anguish, sadness, and solitude, because the “I” lives in the illusion of being separate from everything. The Self is a superior trait of consciousness; it is the awareness of being distinct yet not separate from nature and the universe, partaking of the same vacuity, which is eternal instantaneity. The Self manifests with a profound sense of calm, an a-temporal vision, a powerful energy, and a state of unfailing bliss.

Selene Calloni Williams, with a degree in psychology and master’s in screen writing, has authored several books and documentaries on psychology, deep ecology, shamanism, yoga, philosophy, and anthropology. A direct student of James Hillman, she studied and practiced Buddhist meditation in the hermitages of the forests of Sri Lanka and is an initiate of Shamanic Tantric Yoga. She is the founder and the director of the Imaginal Academy Institute in Switzerland.

“The most ancient of wisdom traditions call on our relationship with the mother. Now at the point of the shift away from the dominance of patriarchy, Williams presents us with what can take us beyond dualism. The Mother Mantra is a calling to our depths toward unification from a place of love.”

"The concept of an illusionary material realm that must be overcome to achieve “heaven” is at the heart of all serious spiritual/metaphysical philosophies. This book explains it in the language of depth psychology... Referencing Carl Jung, Joseph Campbell, and her personal teacher James Hillman, she also credits Buddhist meditation and Shamanic Tantric Yoga for the context in which she offers this wisdom to readers."

"Guides us through the process of 'reabsorbing reality', of examining our everyday lives and beliefs, and re-imagining who we are in a fresh way, more deeply connected to our full and true selves and to the wisdom of Nature. Williams has provided in The Mother Mantra a good way-in to working with non-duality in an embodied way. If you are not a meditator - or even if you are - this perspective on working with 'reality' as a dream and finding your own integration of consciousness and shadow will take you deeper into the alchemical process of self-understanding and healing"

The Ancient Shamanic Yoga of Non-Duality