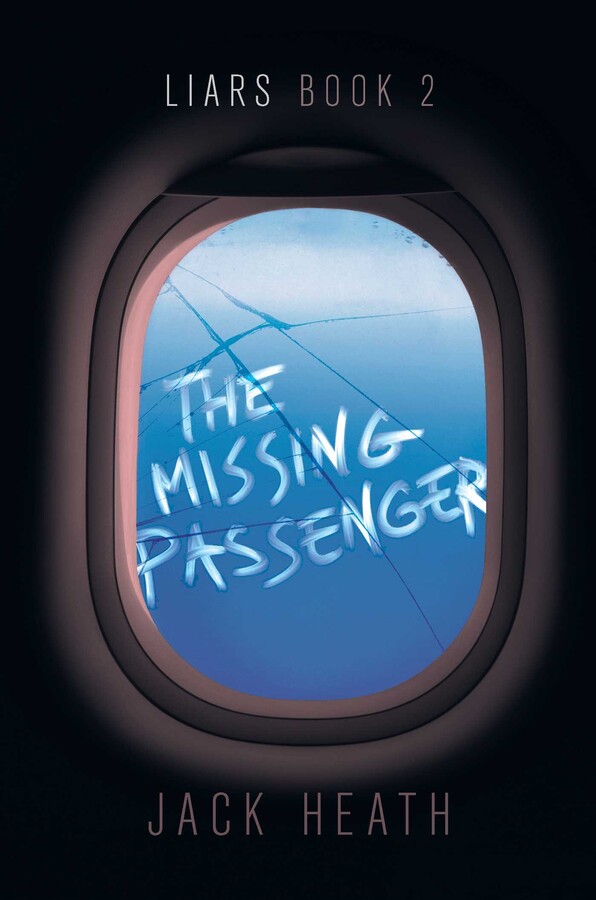 Book #2 of Liars
By Jack Heath
LIST PRICE $18.99
PRICE MAY VARY BY RETAILER

Jarli only narrowly escaped death after his world-shattering app made him infamous. Now there’s a new foe afoot and Jarli is far from safe in this thrilling sequel to The Truth App.

When a seemingly unoccupied plane crash lands in the middle of Kelton, Jarli’s attempts to lay low and out of Viper’s criminal crosshairs crash lands along with it.

The cause of the accident is a mystery until his Truth App uncovers a dangerous secret at the crash site—a secret Viper will do anything to keep buried.

Suddenly Jarli is a target again and on the run with his high school tormentor, Doug. There’s no one he can trust, not even the police—and Jarli’s starting to think Doug is hiding something, too. Constantly at odds and left with no other choice, they team up to conduct an investigation of their own. But when Doug’s past comes back to haunt them, Jarli fears that there’s little hope in getting out of this one alive.

Kelton was supposed to be the perfect hiding place. But there’s no hiding from the truth.

Jarli looked up from his chips just in time to see the plane screaming toward them. Sunlight bounced off the wings, dazzling him. The stink of jet fuel filled his nose. His eyes widened as he saw the emergency exit gaping open above the whirling engines.

A blast of air hit Jarli like a hurricane, sending him staggering sideways off the footpath. The wind ripped the bag of chips from his hands.

The wings cast triangular shadows, which swept across Jarli and Bess as the plane hurtled over their heads, dropping toward the street.

The left wingtip clipped a streetlight, smashing the top off it. A blizzard of glass rained down. The right wing hit a power pole with a deafening CLANG, knocking it flat and snapping the cables. Lights went dead in all the surrounding houses.

“Get down!” Jarli cried. He and Bess hit the ground as a broken power cable whipped through the air above them, shooting sparks. Bess was shouting something, but the engines were too loud. Jarli couldn’t hear the words.

When he looked back at the plane, he saw that the landing gear still hadn’t come out. With a screech, the belly of the plane hit the street, flinging aluminum splinters in all directions. The wings smashed through hedges, destroying letterboxes and sending wheelie bins flying. One wing hit a parked car, flipping it over and over like in a demolition derby.

Then the plane plowed into the big two-story house at the end of the street. The building exploded into a cloud of broken bricks and shattered glass.

Jarli stared in horror, his hands over his mouth. Debris rained down. Dogs were barking all over the neighborhood. The trees, which had been crowded with birds a minute ago, were empty.

“Crikey,” Bess whispered. “You think anyone was in there?”

“I sure hope not,” Jarli said. He couldn’t hear any screaming, but his ears were still ringing.

The hull of the plane had cracked like an egg, spilling jet fuel across the road. Smoke poured from the engines. People would see the black cloud from kilometers away.

Thirty seconds ago the world had seemed so normal. He and Bess had just rented Snake Man 3 from the old video store on the way home from school. Bess had insisted on walking, despite her crutches. They’d bought hot chips and had been eating them as they strolled back to Jarli’s place in the afternoon sun.

Now the sky was black, and the street was strewn with rubble. It was like they had been teleported into a war zone.

Jarli couldn’t just stand there. “Are you hurt?” he asked Bess.

Bess had grabbed her crutches and was trying to get up. “No. You okay?”

“What about you? Jarli!”

Jarli was already sprinting toward the downed plane and the smashed house. Someone could be in there, bleeding to death. There was no time to lose.

The closer Jarli got, the worse the smoke became. The turbines in the engines were still spinning, creating a cyclone of unbreathable hot air that baked the insides of his lungs.

“Hello?” Jarli’s voice was already raspy from the smoke. “Is anyone in there?”

If anyone replied, he couldn’t hear them over the noise of the engines.

The plane lay inside the wreckage of the house. Jarli ran up the driveway and through the smashed front wall until he reached the wing. Broken glass crunched under his shoes. His head was just below the row of passenger windows.

He was afraid of what he might see inside. But he had to look. Dread filling his stomach, he climbed onto a pile of rubble and peered through one of the smashed windows.

He saw nothing but empty seats.

Relieved but wanting to be certain, Jarli circled around to the emergency exit and poked his head in. The plane had room for about a dozen people, but no one was there. Not even the pilot. The cockpit door hung open, revealing shattered controls and an empty seat.

Everyone must have bailed midflight. But why?

Whumpf. Flames raced across a puddle of jet fuel behind him. Jarli jumped away from the intense heat.

If anyone was in the house, he didn’t have long to find them. He’d seen how fast a fire like this could spread.

Covering his face with one arm, Jarli stumbled into the wrecked building. Only one wall still stood. The rest looked like ruins from ancient Rome. Chunks of the ceiling were all over the floor. Someone could be underneath the debris. Unconscious, maybe.

Jarli’s eyes stung. The puddles of burning fuel were spreading. Behind him, near the remains of the front wall, smashed wooden beams were catching fire. Having barely escaped from a burning warehouse a few months ago, Jarli knew he was running out of time to leave. Soon his lungs would fill with deadly smoke.

But what if someone was still alive in here?

“Hello?” he bellowed and immediately started coughing. There was no response.

Jarli clambered over some rubble, searching for survivors. He lifted a few chunks of brickwork—looking for an arm, a foot, anything. The hot bricks stung his hands. There was nothing underneath them except broken glass.

He passed a smashed TV, then a crumpled fridge. There was a blackened plastic box nearby that might have been a data projector.

Jarli looked back. His heart clenched as he saw that the fire was already climbing the walls. Smoke hid the ceiling, growing thicker every second. Jarli quickened his pace, wading through cutlery and smashed plates. The gas stove was a twisted wreck, lying on its side. This must have been the kitchen.

The back wall of the house was missing, pushed out by the plane. He could see the backyard through the haze. The innards of the house had been scattered across the grass. A queen-size mattress was impaled on the back fence. A chest of drawers floated in the swimming pool—

Wait. Back up. Gas stove.

This house was connected to the gas main. When the flames reached it, the main could explode. Jarli was standing on a time bomb.

The backyard pool was still full of water. It might protect him, but he couldn’t just jump in—he had to warn Bess about the gas. He turned and ran back the way he’d come. The fumes from the burning jet fuel still scorched his throat. The smoke surrounded him. He was dizzy and could barely see. The only light came from the flames, blazing all over the shattered beams.

Jarli tripped over a TV and hit the ground. Broken glass stung his palms. He’d already gone past the TV… hadn’t he? Was he stumbling around in circles? Which way was the front of the house?

Jarli got to his feet and staggered through the smoke in what he hoped was the right direction. The heat stung his eyes, so he closed them. A few steps later, he bumped into a wall.

Only one internal wall had been left standing. At least now he knew where in the house he was. He felt his way across the bricks, eyes stinging.

Then he tripped again and fell.

He hit the floor shoulder first. He tried to get up, but it was hard to figure out which way up was. As he crawled along the hot wood, his arms kept collapsing under him. His muscles felt frail. He couldn’t see or breathe. The sound of the roaring flames started to fade. The heat, the light, the smell—everything was slipping out of reach.

“Help me!” A whisper was all he could manage.

Darkness crawled in from the edges of his vision.

Jack Heath is the author of several books, including the Danger series, the Fero Files, the Ashley Arthur series, the Agent Six of Hearts series, the Liars series, and The Mysterious World of Cosentino series. He lives in Darwin, Australia.

Book #2 of Liars
By Jack Heath
LIST PRICE $18.99
PRICE MAY VARY BY RETAILER