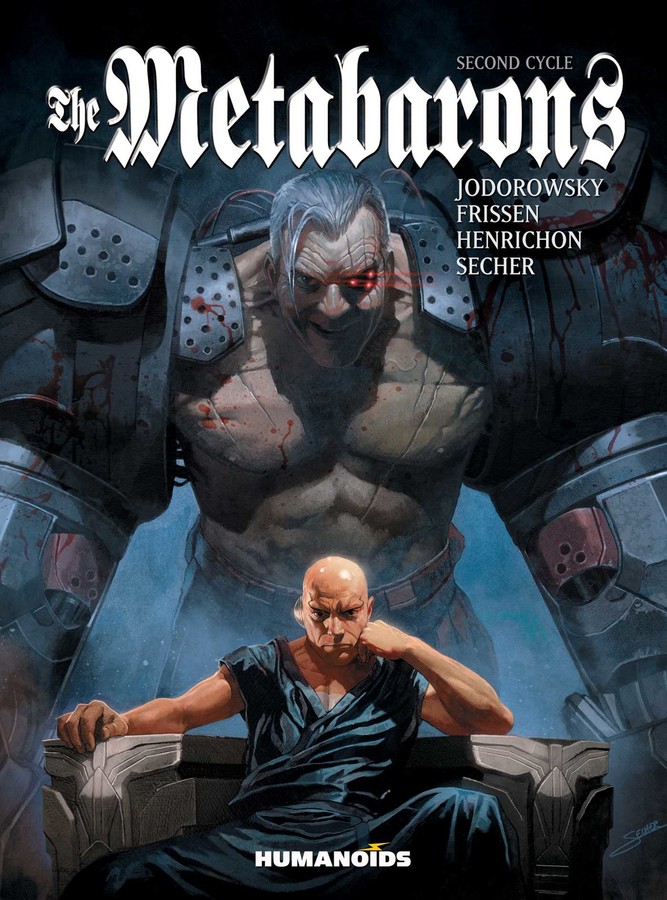 The Metabaron is back in a new collected edition!

Writer/director/ producer David S. Goyer (Man of Steel, Batman v Superman: Dawn of Justice) called The Metabarons: “The greatest work of graphic fiction ever produced,” and it has sold millions of copies globally.

Jerry Frissen (born Thierry Frissen in Belgium) is an American comic book writer and toy & graphic designer. He is the senior graphic designer at Humanoids as well as the author of several best-selling graphic novels, including the anthology comic book series "Lucha Libre" ("Unfabulous Five," "The Tikitis"), "The Zombies That Ate The World" ("The Z Word") and the new cycle of the internationally acclaimed series "The Metabarons," co-written with Alejandro Jodorowsky and illustrated by Valentin Sécher, Niko Henrichon and Esad Ribic, under the title "The Metabaron." In addition to his work on "The Metabaron," Jerry Frissen is also the author of the forthcoming sci-fi thriller "Exo" (March 2018).

Jodorowsky was multi-talented from an early age, becoming skilled in puppetry and mime, in addition to writing, by his late teens. He traveled with a pantomime troupe in the 1950s, and within a couple years had made his way to Paris where he collaborated with the world-renowned mime Marcel Marceau.

In the 1960s, Jodorowsky ventured further into the world of theater, creating in Mexico, the Panic Movement. This innovative artistic movement allowed him to creatively participate in over a 100 theater productions. The 1970s saw him transition into the world of film where he quickly put a defining stamp on all his cinematic works. He directed several cult films, namely the infamous "El Topo," a Midnight movie favorite. Shortly thereafter, Jodorowsky became attached to direct the adaptation of the famous Frank Herbert sci-fi epic novel "Dune." At the preparation stage of the film, he brilliantly assembled a team of extremely diverse and gifted artists such as HR Giger, Chris Foss, Dan O'Bannon, and Moebius, all of who would later be hired as concept artists on Ridley Scott's "Alien." The development of "Dune" came to a halt due to financial problems, but Jodorowsky, having been exposed to such immense visual talent, propelled himself into writing graphic novels, pairing up with the artist Moebius. This collaboration resulted in what many consider to be one of the most creative European sci-fi graphic novel series of all time, "The Incal," which went on to sell millions of copies worldwide.

Since penning "The Incal," Jodorowsky continued writing top selling comic books with a wide variety of Europe's most talented artists, such as "The White Lama" (with Bess), "The Metabarons" (with Gimenez), "The Technopriests" (with Janjetov), and most recently "Bouncer" (with Boucq).

Along with nurturing his many other talents, Jodorowsky remains a unique storyteller whose published contributions have secured his status as one of the world's most prolific graphic novel writers.

At only 29, Valentin has already been published by Titan Comics (Khaal) and Humanoids (The Metabaron Book 1 & 3). A rising star in the European comics scene, he took up the challenge of following in the footsteps of Juan Gimenez, creating his own version of Jodorowsky's universes: cinematic landscapes and beautiful, realistic fight scenes.

Niko Henrichon is a Canadian comic artist most known for Pride of Baghdad (Vertigo) and Noah (Image), the former earning him an Eisner nomination for Best Penciller/Inker. He has also worked on Fables, New X-Men, Sandman and Spiderman in addition to his covers of Fantasic Four and X-Men.

Praise for The Metabarons Series


"What keeps me going back to The Metabarons is the immense volume and speed of its innovation. There is literally a new and mad idea on every page."

"The Metabaron cycle (...) is, to my mind, the greatest work of graphic fiction ever produced."

"[A] magnum opus of unadorned emotion and one that will surprise you in its thoughtfulness and craft."