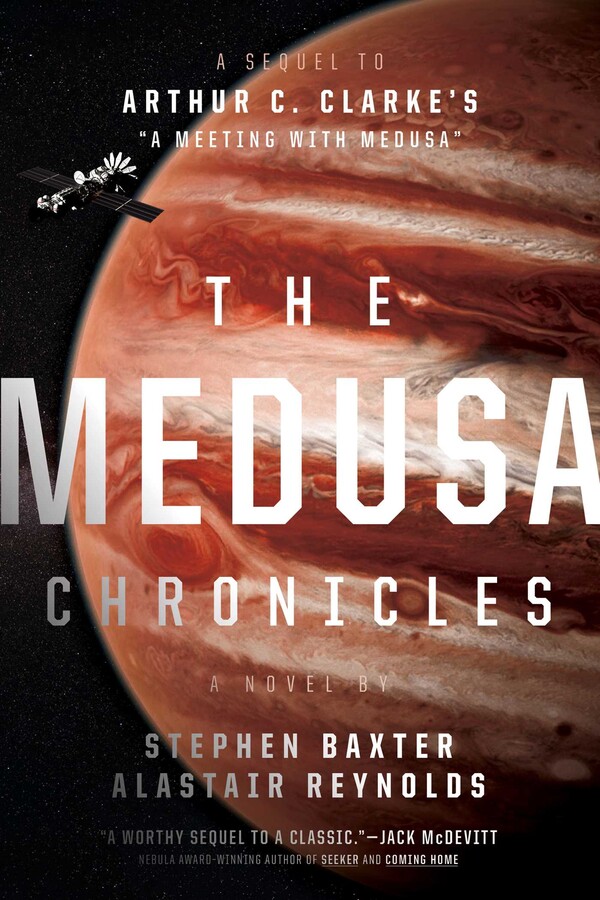 By Stephen Baxter and Alastair Reynolds
LIST PRICE $7.99
PRICE MAY VARY BY RETAILER

Howard Falcon almost lost his life in an accident as the first human astronaut to explore the atmosphere of Jupiter—and a combination of human ingenuity and technical expertise brought him back. But he is no longer himself. Instead, he has been changed into an augmented human: part man, part machine, and exceptionally capable.

With permission from the Clarke Estate, Stephen Baxter and Alastair Reynolds continue this beloved writer’s enduring vision and have created a fresh story for new readers. The Medusa Chronicles charts Falcon’s journey through the centuries granted by his new body, but always back to mysteries of Jupiter and the changing interaction between humanity and the universe. A compelling read full of incredible action right from the beginning, this is a modern classic in the spirit of 2001 and The Martian. 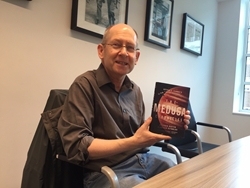 Courtesy of the author
Stephen Baxter

Stephen Baxter was born in 1957 and has degrees from Cambridge and Southampton. He is the preeminent science fiction writer of his generation. With Terry Pratchett, he as coauthored the Long Earth novels. As a world-renowned bestselling author, Baxter has won many major awards in the UK, US, Germany, and Japan including the British Science Fiction Award (four times), and he has been shortlisted for the Hugo Award (six nominations), the Arthur C. Clarke Award (seven nominations), and has been awarded the John W. Campbell Memorial Award, the Philip K. Dick Award, and the Theodore Sturgeon Award. He lives in Northumberland with his wife. 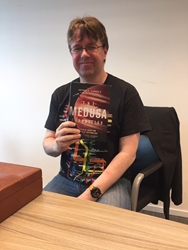 Courtesy of the author
Alastair Reynolds

Alastair Reynolds was born in Barry, South Wales, in 1966. He studied at Newcastle and St. Andrews Universities and has a PhD in astronomy. He stopped working as an astrophysicist for the European Space Agency to become a full-time writer. Reynolds is a bestselling author and has been awarded the British Science Fiction award, along with being shortlisted for the Hugo Award, the Arthur C. Clarke Award, the John W. Campbell Memorial Award, the Theodore Sturgeon Award, and the Locus Award.

"A worthy sequel to a classic."

Two of the most acclaimed contemporary hard SF writers successfully team up in this ambitious epic space opera, spanning almost 800 years, that expands the themes raised by Arthur C. Clarke’s classic 1971 novella, A Meeting with Medusa. Clarke’s hero, Howard Falcon, suffered horrific injuries in an accident in 2080, surviving only by cybernetic surgery; his new abilities led him to a successful search for extraterrestrial life and positioned him to be an “ambassador... between the creatures of carbon and the creatures of metal.” That unsought status tests Falcon as, over the centuries, robots begin to become self-aware and seek autonomy. Humankind’s expansion of its reach beyond Earth provides more opportunity for conflict, and the authors do a superior job of predicting plausible political developments. The novel’s reach does come at the expense of some psychological depth, but fans of the authors’ other work won’t be disappointed.

"The Medusa Chronicles is a good old-fashioned SF tale, strong on big ideas and filled with sensa-wunda and magical moments. There’s even some genuine surprises. It’s an ambitious if not audacious thing to try, and I’ll happily admit that I am a tough critic of anything connected to one of my favourite authors, who inspired me to read science fiction. My main worry before reading was that it would have been a pastiche of one of my heroes, but instead I found a book produced with respect for one of the genre’s most-loved classic authors.  I therefore think it fitting if I say that I think that Sir Arthur would be pleased by this."

"A surprisingly substantial extension of "A Meeting With Medusa" suggested by chance “by Alastair Reynolds in the course of a nostalgic email exchange” with Stephen Baxter, The Medusa Chronicles tells the story of those very centuries, and it is—if you’ll pardon my hyperbole—frickin’ terrific."

"The results are remarkable; Baxter and Reynolds may have been working out of reverence for the original story, but this is no mere exercise in nostalgia. It is a breathtaking standalone work, a sci-fi story of rare scope and intelligence, celebrating Clarke’s legacy even as it sets out for new territory."

"A fitting tribute to the original."

By Stephen Baxter and Alastair Reynolds
LIST PRICE $7.99
PRICE MAY VARY BY RETAILER