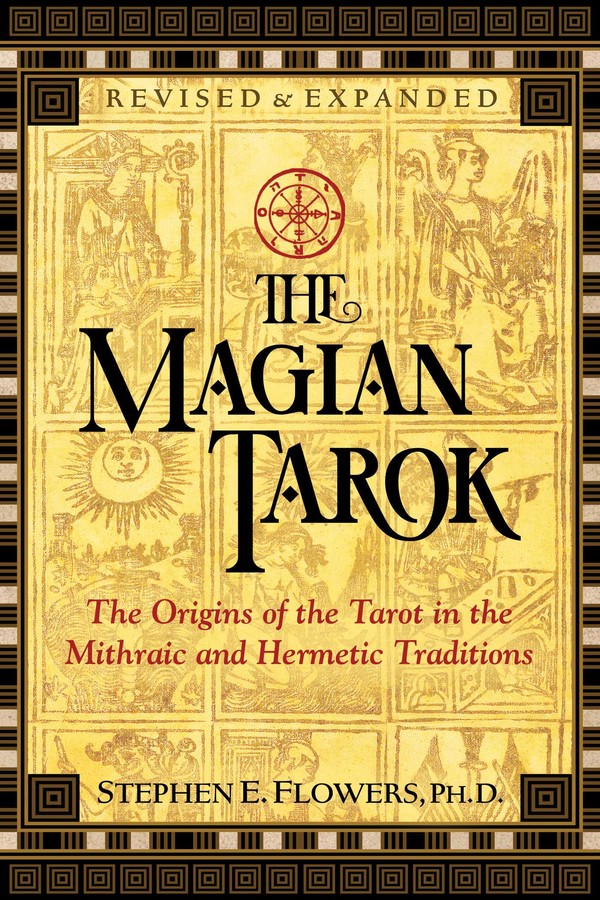 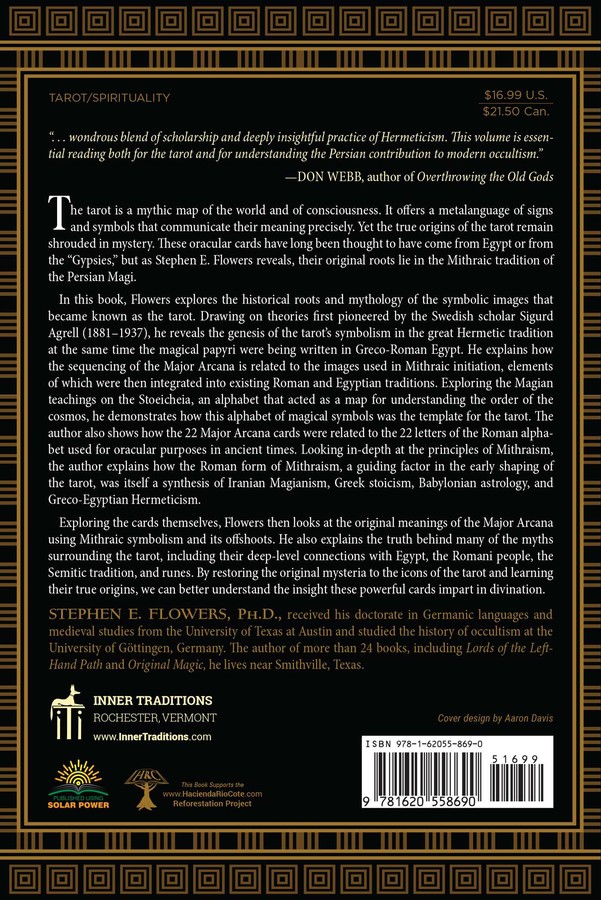 • Looks at the original meanings of the Major Arcana using Mithraic symbolism, as well as the deep-level connections of the Tarot with Egypt, the Romani people, the Semitic tradition, and runes

The Tarot is a mythic map of the world and of consciousness. It offers a meta-language of signs and symbols that communicate their meaning precisely. Yet the true origins of the Tarot remain shrouded in mystery. These oracular cards have long been thought to have come from Egypt or from the “Gypsies,” but as Stephen E. Flowers reveals, their original roots lie in the Mithraic tradition of the Persian Magi.

In this book, Flowers explores the historical roots and mythology of the symbolic images that became known as the Tarot. Drawing on theories first pioneered by the Swedish scholar Sigurd Agrell (1881-1937), he reveals the genesis of the Tarot’s symbolism in the great Hermetic tradition at the same time the Magical Papyri were being written in Greco-Roman Egypt. He explains how the sequencing of the Major Arcana is related to the images used in Mithraic initiation, elements of which were then integrated into existing Roman and Egyptian traditions. Exploring the Magian teachings on the Stoeicheia, an alphabet that acted as a map for understanding the order of the cosmos, he demonstrates how this alphabet of magical symbols was the template for the Tarot. The author also shows how the 22 Major Arcana cards were related to the 22 letters of the Roman alphabet used for oracular purposes in ancient times. Looking in-depth at the principles of Mithraism, the author explains how the Roman form of Mithraism, a guiding factor in the early shaping of the Tarot, was itself a synthesis of Iranian Magianism, Greek stoicism, Babylonian astrology, and Greco-Egyptian Hermeticism.

Exploring the cards themselves, Flowers then looks at the original meanings of the Major Arcana using Mithraic symbolism and its offshoots. He also explains the truth behind many of the myths surrounding the Tarot, including their deep-level connections with Egypt, the Romani people, the Semitic tradition, and runes. By restoring the original mysteria to the icons of the Tarot and learning their true origins, we can better understand the insight these powerful cards impart in divination.

Chapter 4. The Magian Tarok
Symbolism of the Major Arcana

The Tarot, as it surfaced in the late Middle Ages, was not the beginning, but rather the end, of a long process of development and transformation. There are a number of clues we can use to reconstruct the oldest imagery of the original Roman “Tauroc,” which can in turn act as the basis for a possible recovery of the imagery of the two “lost cards” of the prototypical and hypothetical “Greek Taurok.”

From a historical perspective one of the most fascinating aspects of the study of these images is that the icons are drawn from such a wide range of sources. Many of the main elements are derived from the Iranian Mithraic (or Magian) stream of thought, or from the Semitic Mesopotamian tradition, or from Egyptian mythology and religion--as well as from the primary Greek and Roman traditions. But less well known elements are also especially strongly represented. Old and suppressed, or officially ignored, gods and goddesses of Rome figure prominently, e.g. Orcus and Libera, while Greek elements are often those which were imported at some time from originally non-Greek realms (such as Hekatê from Thrace). The reasons for this openness to suppressed material is that the Mithraic and Magian tradition was falling increasingly into this category in the West itself. The Mithraic cult became a clearing-house for all kinds of ideas being driven progressively more underground by the establishment of orthodox Christianity.

The interpretive comments offered on each of the Tarok images below are drawn from a variety of sources, but they cannot pretend to be exhaustive. Readers are invited to review material found elsewhere in this book, especially where the symbolism of the magical disk of Pergamon or the lore of the individual Greek stoicheia are outlined, to discover for themselves hidden links between the Roman system of Arcana and some of the older traditions. The discovery of the Greek letter which corresponds to each of the Roman Arcana is often essential in reconnecting the Arcanum in question to the deepest levels of mystery.

The general image of The Fool is that of what appears to be a court jester wandering in the countryside with a bundle on a stick. He is often being bitten on the leg or elsewhere by a dog. In the Gringonneur deck the man has the ears of a bull or some other animal. This is perhaps explained in the origin of the name of the image and the whole series of images discussed below.

The name (Il Matto in Italian and “The Fool” in English) is universal in its implications. Originally there were only three cards called “trumps”: The Fool, The Magician and The World. Each of these are worth five points in the game of Tarock. The word “trump” has its origin in the Latin word triumphus, but influenced by the word triumviri “three men.” It was before these “three men,” the triumvirate, that the triumphal victory marches in Rome were made. In the symbolic language of the Tarot these “three men” were the human figures represented in the three cards in question, which came at the beginning and end of the sequence of images.

In fact, as mentioned earlier, the name of the whole system my stem from the original name for this, the first image. Agrell pointed out that a French Provençal word taruc, derived from the Latin taurus, “bull,” means “a stupid person,” a “bull-headed” person-- a “fool.” Even more evocative is the idea that the name of the whole system is derived from the Greek term, later Romanized, for the Mithraic “bull slaying”: tauroktonia. This act of bull sacrifice is, of course, responsible for the inception of the natural generative and regenerative universe, it is the beginning of all developing or evolving things. Therefore, from a Mithraic viewpoint it is the beginning of the series of evolutionary and initiatory images, and a description of the whole series as well. This is much like naming a series of letters after its beginning: alpha-beta, ABC, futhark, etc.

The original number of this image was one. The later assignation of the number zero to the image is a modern affectation. The Number One, as a pure quality (not a quantity), contained most of the connotations zero has for modern mind. Oneness contains everything and is therefore the virtual equivalent of nothing.

The Roman-Mithraic name of this image for divinatory purposes should be one that begins with an “A.” This name would have been readily available to the Romans of the time in the form of the name of the Egyptian divine bull of the Sun: Apis. Apis was very well-known in the ancient world. This is what Agrell assigned to the icon in question here. However, it is my thought that this word, Apis, contains a great mystery. The Latin word apis also means “bee.” This is a symbol for the Mazmaga -- the “Great Fellowship” of initiates responsible for spreading the philosophy of Zarathustra and for insinuating elements of it into other systems. The Fool is most often an (at first) unwitting initiate into this invisible realm of wisdom.

The original image was probably that of the complete Mithraic “bull-slaying” (tauroktonie), although for divinatory purposes the image was probably no more than the horns of a bull, perhaps with a dog depicted below the horns. When we look at a complete depiction of the tauroctony we see Mithras stabbing the bull with a knife, while he is looking away -- in disgust or ignorance of the consequences of his action -- as a dog licks the blood dripping from the wound. A scorpion is stinging and attempting to devour the bull’s testicles, below the whole scene slithers a snake, and above it hover images of the Sun and Moon, as well as the entire zodiac. This one scene prefigures many of the major images of the Tauroc series.
Stephen E. Flowers

Stephen Flowers studied Germanic and Celtic philology and religious history at the University of Texas at Austin and in Goettingen, West Germany. He received his Ph.D. in 1984 in Germanic Languages and Medieval Studies with a dissertation entitled Runes and Magic.

“Every occultist of whatever stripe has at least one tarot deck. Most of them have either no clue as to origins or, worse still, have bought into bad eighteenth- or nineteenth-century pseudo-mythology. The deeper roots in Roman and Persian symbols are well traced here by Stephen E. Flowers, who is both a practicing magician and a respected scholar of Indo-European religions and languages. This book is a wondrous blend of scholarship (into areas not available in English or even German or French) and deeply insightful practice of Hermeticism. For the powerful human who knows the age-old secret, ‘To master the Fruit, know ye the Root.’ This volume is essential reading both for the tarot and for understanding the Persian contribution to modern occultism.”

“Like every book penned by Stephen E. Flowers, this too is an epitome of erudite readability and is proof positive of his uncanny knack of digging up the most enlightening arcane information--enticing and surprising lay readers and experts alike. The deep tarot as you’ve never known it, highly recommended!”

– Frater U?D?, founder of Pragmatic and Ice Magic and author of The Magical Shield and Sex Magic

“For many years Stephen E. Flowers, Ph.D., has pushed the boundaries of Western esoteric discourse by introducing obscure untranslated texts and authors to English-language audiences. His concise and approachable analysis of Sigurd Agrell’s tarot theories has once again opened the way for scholarship on an otherwise ignored topic, and The Magian Tarok is sure to be the definitive reference on its subject for years to come.”

"This is a serious scholarly treatise tracing the roots of TAROT imagery back to the beginnings of recorded history. Flowers gave me the thread that connected all the pieces of Western esoteric wisdom I have been collecting. He writes directly without the obscure trappings of esoteric writings from a century ago. If you know who the players are, it suddenly all makes sense."

"A detailed and seminal work of exceptional scholarship, "The Magian Tarok: The Origins of the Tarot in the Mithraic and Hermetic Traditions" is a unique, extraordinary, and definitive introduction to the origin and history of the Tarot and a 'must' for all personal, professional, community, and academic library Metaphysical Studies collections in general, and The Tarot supplemental studies lists in particular."

"Flowers' academic background shows itself throughout the work with its special care for solid research and disdain for speculation for it's own sake."