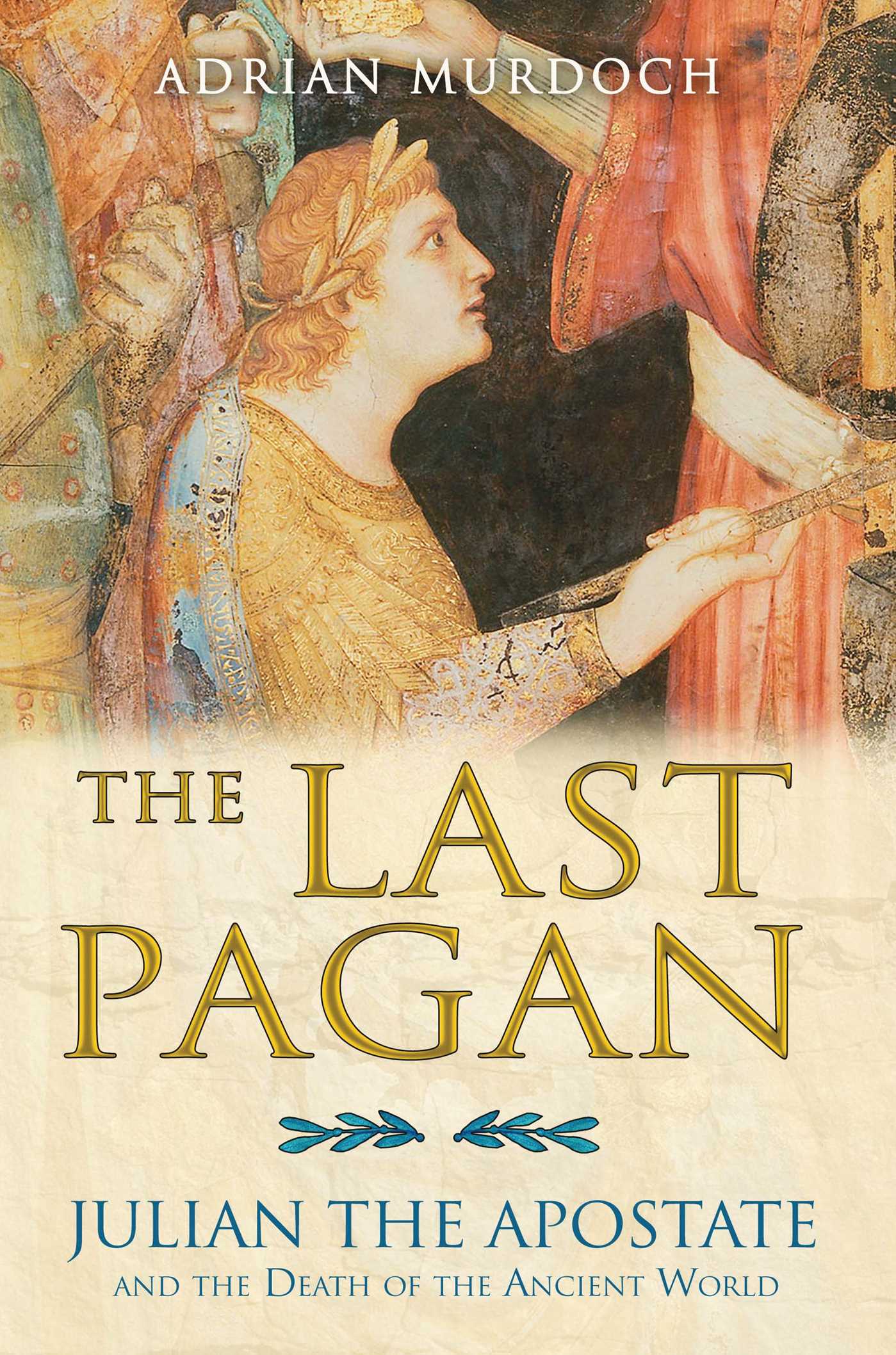 Julian the Apostate and the Death of the Ancient World

A history of Julian, the grandson of Constantine, and his failed attempt to reverse the Christian tide that swept the Roman Empire

• Portrays the “Apostate” as a poet-philosopher, arguing that had he survived, Christianity would have been checked in its rise

• Details reforms enacted by Julian during his two-year reign that marginalized Christians, effectively limiting their role in the social and political life of the Empire

• Shows how after Julian’s death the Church used paganism to represent evil and opposition to God, a tactic whose traces still linger

The violent death of the emperor Julian (Flavius Claudius Julianus, AD 332-363) on a Persian battlefield has become synonymous with the death of paganism. Vilified throughout history as the “Apostate,” the young philosopher-warrior was the last and arguably the most potent threat to Christianity.

The Last Pagan examines Julian’s journey from an aristocratic Christian childhood to his initiation into pagan cults and his mission to establish paganism as the dominant faith of the Roman world. Julian’s death, only two years into his reign, initiated a culture-wide suppression by the Church of all things it chose to identify as pagan. Only in recent decades, with the weakening of the Church’s influence and the resurgence of paganism, have the effects of that suppression begun to wane. Drawing upon more than 700 pages of Julian’s original writings, Adrian Murdoch shows that had Julian lived longer our history and our present-day culture would likely be very different.

On this day I gave to Mr. Fletcher Christian, whom
I had before desire to charge of the third watch, a
written order to act as lieutenant.
Captain William Bligh,
log of HMS BOUNTY, 2 March 1788

As he entered the town of Vienne in the middle of December AD 355 an old woman shouted out at Julian: “This is the man who will restore the temples of the gods.”1 Her foresight may have been remarkable, but it is unlikely to have done anything to calm the nerves of the young Caesar. For all the bright sunlight and the streets decorated with garlands and branches and greenery, the spare had become the distinctly unwilling heir.
He was in a foreign country with more ceremonial than real power; he knew that at the first hint of sedition the emperor would have no compunction about having him executed, just as he had his brother; worse, his promotion was one that could be withdrawn in typical Constantinian manner if the emperor had a son. As he was about to cross the border into Gaul, dispatches had reached him that one of the provincial capitals had been captured by the Franks. Little surprise that Julian was heard to mutter to himself that all he had achieved by the promotion was the prospect of dying with more work on his hands.
That summer, on August 11, 355, Claudius Silvanus, commander of the Gaulish army, had himself proclaimed emperor at Cologne. The twenty-eight-day emperor was stabbed to death by his own men on his way to a Christian service at dawn on September 7, but Constantius believed the situation remained volatile enough to warrant the posting of an imperial military representative, and took the step of promoting his young, inexperienced cousin.
On November 6, Julian found himself standing on a rostrum, surrounded by eagles and standards in front of all the troops that were stationed near Milan. With the over-formality for which Constantius was famous, the emperor took Julian by his right hand, told the assembled crowd of soldiers of his decision, and put the purple robe round his young cousin’s shoulders. As the troops cheered, the more observant noticed the grimace on the young Caesar’s face and his look of dejection. It is said that as he took his place next to the emperor in the carriage Julian muttered to himself a line from The Iliad. He said that fate had just wrapped him in “death’s purple.”3 It is probably a fair assessment of the way he felt.
The winter of 355 was a personal turning point for Julian. He could have decided to enjoy the trappings of power in the palace in Vienne and given himself over to a life of luxury. He could have withdrawn into himself and carried on his academic readings. Julian did neither of these things. He decided instead to become a soldier and a ruler.
If he wanted to survive, he needed to learn how to become one of the men. Julian put himself through basic training. He exercised with post and foils; practiced throwing javelins; trained in jumping and attacking at the same time; chopped trees, carried loads, swam, and ran with a full pack.15
Rather than let himself be pampered when he returned to the palace, Julian made sure that it got about that he had turned his back on a bed with silk sheets and a duvet and slept, like regular soldiers, under a rough rug and blanket. He also spurned the luxuries of a spoiled young aristocrat—he ate and drank what the soldiers did. Out were delicacies like pheasant and sows’ udders (some particularly unappetizing examples of recipes for the latter with asafetida and mulled wine have survived in the cookery book of the first-century author Apicius), and in were soldiers’ rations of grain to be made into bread. Roman legionaries lived on a daily average of 3,000 calories, made up of almost a liter of grain, which could be made into bread, and probably a small amount of meat. Out too was wine, symbol of Roman easy living; in was beer, the drink of his troops.
As well as learning to be a soldier, Julian also threw himself into reading everything that he could get his hands on that might be useful for his command. As might be expected, he continued with his study of poetry and philosophy, but he also got his Latin up to scratch, read everything he could on Gaul, and made sure that he knew Julius Caesar’s Conquest of Gaul inside out. “Even when I take the field, one thing above all else goes with me as a necessary provision for the campaign, one narrative of a campaign composed long ago by an eyewitness.”17 The question of Julian’s knowledge of Latin has been oft debated. Although it is obvious that he much preferred Greek, by the end of his life he must have been fluent in Latin too, partly because he needed to communicate with his Gaulish troops and partly to show up his uncle. Constantine’s linguistic skills were so poor he needed an interpreter to help him translate into Latin.
Julian was lucky in having a Gaulish financial officer called Salutius Secundus to guide him. Now approaching middle age, Salutius was a stable and experienced administrator. He took the young Caesar under his wing and guided him through the intricacies of government. It was a happy pairing. A few years later Julian was to remember “the labors we shared and endured together; our unfeigned and candid conversation; our innocent and upright intercourse; our cooperation in all that was good; our equally matched and never-repented zeal and eagerness in opposing evildoers. How often we supported each other with one equal temper.”18 Indeed, it was a partnership that was broken only by Julian’s death.
Adrian Murdoch

Adrian Murdoch is a historian and journalist. He is the author of Rome’s Greatest Defeat: Massacre in the Teutoburg Forest and The Last Roman, a biography of Romulus Augustulus, the Western Roman Empire’s final emperor. He is a fellow of the Royal Historical Society.

“A thoroughly engaging book about one of the fourth century’s most interesting emperors.”

– The Journal of Classics Teaching

“Keenly paced and beautifully written . . . quite simply one of the best historical biographies of the year.”

“Friendly to its controversial subject and an easy read.”

"Although this is a book written for the general reading public, and not particularly aimed at Pagan readership, it contains a wealth of information concerning Pagan/Christian relations. It also shows a number of concerns expressed by Julian that are still valid today. . . . This is an excellent book, and I highly recommend it to everyone."

"An eye-opening alternate history uses over 700 pages of Julian's original writings to provide some eye-opening new revelations on his beliefs."

"Murdoch, a Roman historian, sees the short reign of Julian as the real end of ancient Rome. His biography of the young emperor is based on Julian's own words, the angry response of Christian writers, and the comments of other pagans."

"With the current end of the Twentieth Century we are also witnessing the death throes of the most influential religious movements of the last twenty centuries--Christianity and Islam. . . . This end of the Christian Era as some call it, is however, not without its own dangers and precedence. By looking back to the early centuries of the Christian Era, we can in fact, get a better understanding of its origins and what may be awaiting us in the future. . . "

"British historian Adrian Murdoch's The Last Pagan (the phrase comes from the English poet Swinburne) is a thorough-going biography of Julian. In this book, we get a strong sense of the history of the fourth century, which is the age of the decline of the Roman empire made famous by English historian Edward Gibbon, who Murdoch asserts, made Julian the hero of his work."

Julian the Apostate and the Death of the Ancient World