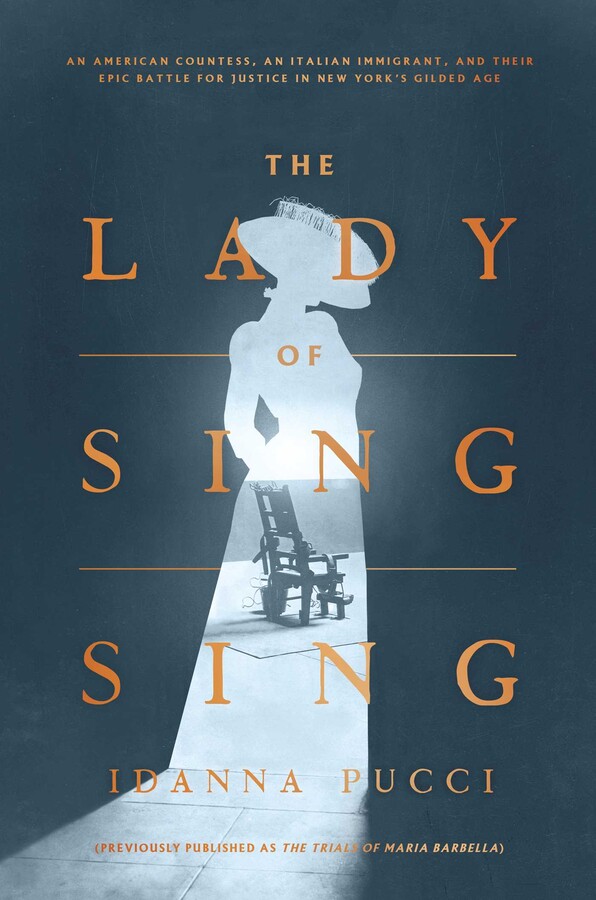 The Lady of Sing Sing

An American Countess, an Italian Immigrant, and Their Epic Battle for Justice in New York's Gilded Age

By Idanna Pucci
LIST PRICE $12.99
PRICE MAY VARY BY RETAILER

This “gripping social history” (Publishers Weekly), with all the passion and pathos of a classic opera, chronicles the riveting first campaign against the death penalty waged in 1895 by American pioneer activist, Cora Slocomb, Countess of Brazzà, to save the life of a twenty-year-old illiterate Italian immigrant, Maria Barbella, who killed the man who had abused her.

Previously published as The Trials of Maria Barbella. In 1895, a twenty-two-year-old Italian seamstress named Maria Barbella was accused of murdering her lover, Domenico Cataldo, after he seduced her and broke his promise to marry her. Following a sensational trial filled with inept lawyers, dishonest reporters and editors, and a crooked judge repaying political favors, the illiterate immigrant became the first woman sentenced to the newly invented electric chair at Sing Sing, where she is also the first female prisoner. Behind the scenes, a corporate war raged for the monopoly of electricity pitting two giants, Edison and Westinghouse with Nikola Tesla at his side, against each other.

Enter Cora Slocomb, an American-born Italian aristocrat and activist, who launched the first campaign against the death penalty to save Maria. Rallying the New York press, Cora reached out across the social divide—from the mansions of Fifth Avenue to the tenements of Little Italy. Maria’s “crime of honor” quickly becomes a cause celebre, seizing the nation’s attention. Idanna Pucci, Cora’s great-granddaughter, masterfully recounts this astonishing story by drawing on original research and documents from the US and Italy. This dramatic page-turner, interwoven with twists and unexpected turns, grapples with the tragedy of immigration, capital punishment, ethnic prejudice, criminal justice, corporate greed, violence against women, and a woman’s right to reject the role of victim. Over a century later, this story is as urgent as ever.

Idanna Pucci is the author of The Lady of Sing Sing; The World Odyssey of a Balinese Prince; The Epic of Life, a classic on Balinese culture; Brazza in Congo: A Life and Legacy, the inspiration for her award-winning documentary, Black Africa White Marble which sheds light on Central Africa’s colonial past and its troubled present. She also produced Talk Radio Tehran about women who fulfill their aspirations in Iran’s gender-apartheid. Aside from her mother tongue, Italian, she is fluent in English, French, and Bahasa Indonesia. With her husband, Terence Ward, she divides her time between her hometown of Florence in Italy, and New York.

“This extraordinary book of historical nonfiction has the shape of drama as old as the Greeks with vivid relevance to the way we live now. The cast includes a young, illiterate immigrant woman from Italy, an American woman of wealth and idealism, and a major historical figure named Thomas Edison. A murder drives the story. But woven through the tale are rich themes of class, shame, cruelty, kindness, loneliness, empathy, and, yes, love. Pick it up!” —Pete Hamill

"As told by Idanna Pucci, [this] story is as gripping as any four-star nail-biter at your local multiplex. It’s also completely true. Readers will come away from this crackling page-turner with a new understanding of how different things were a century ago, and how very much the same.” —San Francisco Chronicle

“Combining her own family history with Barbella’s story, Pucci investigates the sensational crime [and] its equally sensational aftermath.”—The Washington Post

“A real-life story found in an old chest provides all the drama needed today for film roles for women. In 1890s Manhattan, abuse and rape led to a crime that churned up a nation already rumbling about women’s rights.” —New York Daily News

The Lady of Sing Sing

An American Countess, an Italian Immigrant, and Their Epic Battle for Justice in New York's Gilded Age

By Idanna Pucci
LIST PRICE $12.99
PRICE MAY VARY BY RETAILER