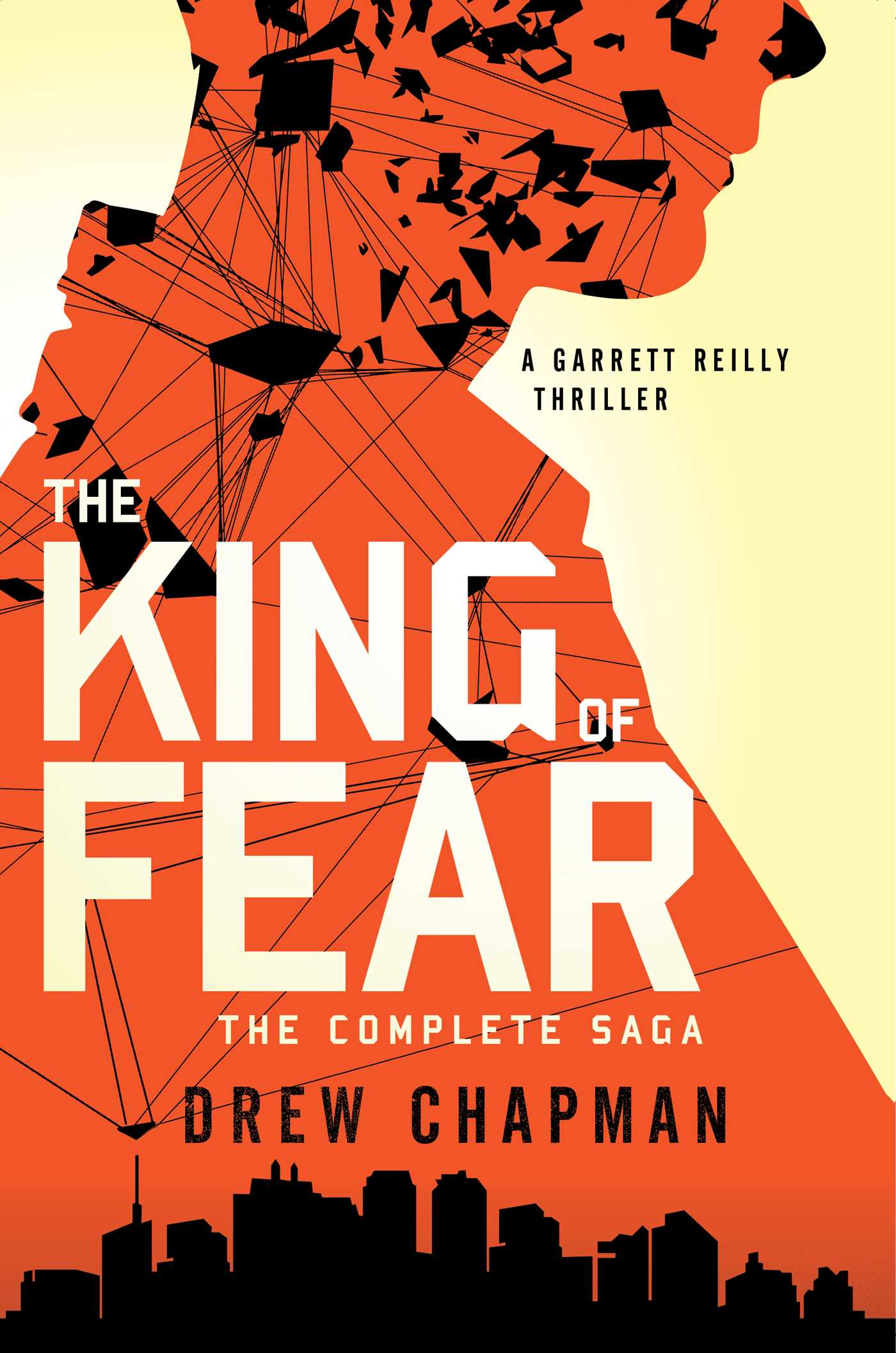 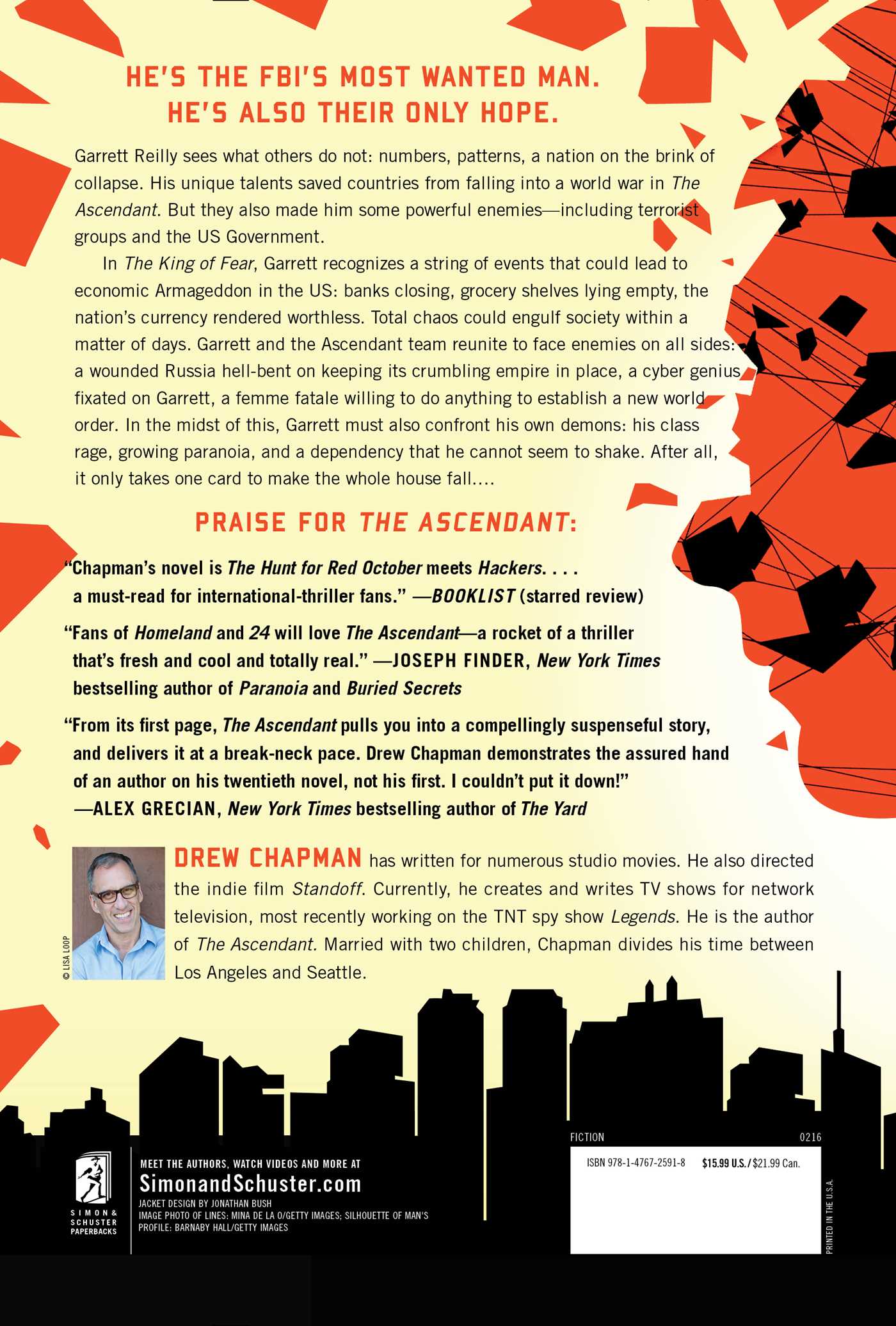 Part of King of Fear Series
By Drew Chapman
LIST PRICE $15.99
PRICE MAY VARY BY RETAILER

The blistering sequel to The Ascendant: An action-packed thriller starring a bond trader turned antihero. Unlikely patriot Garrett Reilly can identify threats against America from both inside and outside the nation’s borders. But now the whole world’s economy is at risk…

Garrett Reilly sees what others do not: numbers, patterns, a nation on the brink of collapse. His unique talents saved countries from falling into a world war in The Ascendant. But it also made him a marked man―marked by terrorist groups; marked by the US Government.

In The King of Fear, Garrett recognizes a string of events that could lead to economic Armageddon in the US: banks closing, grocery shelves lying empty, the nation’s currency rendered worthless. Total chaos could engulf society within a matter of days. Garrett and the Ascendant team reunite to face enemies on all sides: a wounded Russia bent on keeping its crumbling empire in place, a cyber genius fixated on Garrett, a femme fatale willing to do anything to establish a new world order. In the midst of this, Garrett must also confront his own demons: his class rage, growing paranoia, and a dependency that he cannot seem to shake. After all, it only takes one card to make the whole house fall…

A hero with complete disregard for rules and boundaries, Drew Chapman’s rogue genius gives readers “a wild ride through the headlines of our times” (Kirkus Reviews on The Ascendant) and this sequel will not disappoint.

Alan Daniels knocked twice on the door to his boss’s West Wing office, waited a moment for a response—but didn’t get one—then pushed the door open. “You got two minutes?”

The national security adviser already had her purse slung over her shoulder. She let out a long, overly dramatic sigh, then smiled brightly and nodded yes. Julie Fiore liked Daniels. He was her deputy adviser and was loyal and smart. She wanted to get home—her husband was cooking grilled salmon with a honey-mustard glaze, her favorite—but she had two minutes for Daniels. She motioned him across the room.

He laid a thin file folder on her desk. “Elections. Belarus. Early results just came in.”

“They have elections in Belarus?” She grinned mischievously.

“Apparently they do. And as of this morning”—Daniels checked the world clock on his smartphone—“one fifty-three a.m., GMT, they seem to matter.”

Fiore pulled her reading glasses out of her purse, opened the file folder, scanned the single sheet of paper inside, and frowned. “Not possible.”

“And yet”—Daniels thrust two open hands in the air as if to signify that this was something only God could fathom—“there you have it.”

“He’s been reelected four times. They believe in democracy like I believe in unicorns.” She pulled the glasses from the bridge of her nose and rubbed briefly at her eyes with her other hand. She was so tired. “How could this happen?”

He straightened up immediately, wiping the smile from his face. “I checked with the CIA five minutes ago. They were blindsided as well. Analysis is going to work on it overnight, lay out scenarios.”

“Good Lord. After Ukraine, this is . . . this is a disaster. . . .” Her voice trailed off as she turned away from her deputy and looked out her window to the darkened North Lawn. She tried to imagine a faraway place, halfway around the world, a building larger than the White House but just as well guarded, bathed in morning sunlight, full of ministers and generals and their counselors, all simultaneously spitting out their coffee in horror. “Over there. You know where.” She pointed up and into the darkness, as if picking a spot on an invisible map that only she and Daniels could see. “They’re having heart attacks right now. Emergency staff meetings and collective heart attacks.”

“Yes, they are. And when they recover from their heart attacks . . .” Daniels paused to consider his words. He might have couched the idea in a diplomatic euphemism, something vague and less threatening, but alone, with his boss, at the end of the day, weary and ever so slightly jumpy from monitoring the globe’s seemingly endless crises, that just didn’t seem appropriate. “They’re going to start killing people. A lot of people.” 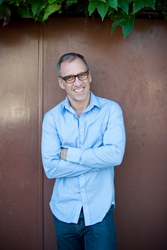 Praise for The Ascendant:

"Fans of Homeland and 24 will love The Ascendant--a rocket of a thriller that's fresh and cool and totally real."
— Joseph Finder, New York Times bestselling author of Paranoia and Buried Secrets

“From its first page, The Ascendant pulls you into a compellingly suspenseful story, and delivers it at a break-neck pace. Drew Chapman demonstrates the assured hand of an author on his twentieth novel, not his first. I couldn’t put it down!”
— Alex Grecian, New York Times bestselling author of The Yard

“Political thriller? International thriller? Financial thriller? Whatever you call it, The Ascendant is smart, edgy, fast-paced storytelling at its best. Its unlikely hero, Garrett Reilly, reminded me of a young Jack Reacher as a tech-savvy bond analyst. Drew Chapman is a debut novelist to watch.”
— Alafair Burke, bestselling author of If You Were Here

“Like his intriguing protagonist Garrett Reilly, author Drew Chapman possesses startling skills and this first novel just blows the doors off. The Ascendant is a rollicking, globe-hopping, timely and prescient page-turner—a Twenty-First Century thriller that once begun refuses to yield or loosen its grip on the reader. A stunning debut.”

Part of King of Fear Series
By Drew Chapman
LIST PRICE $15.99
PRICE MAY VARY BY RETAILER

More books in this series: King of Fear Series