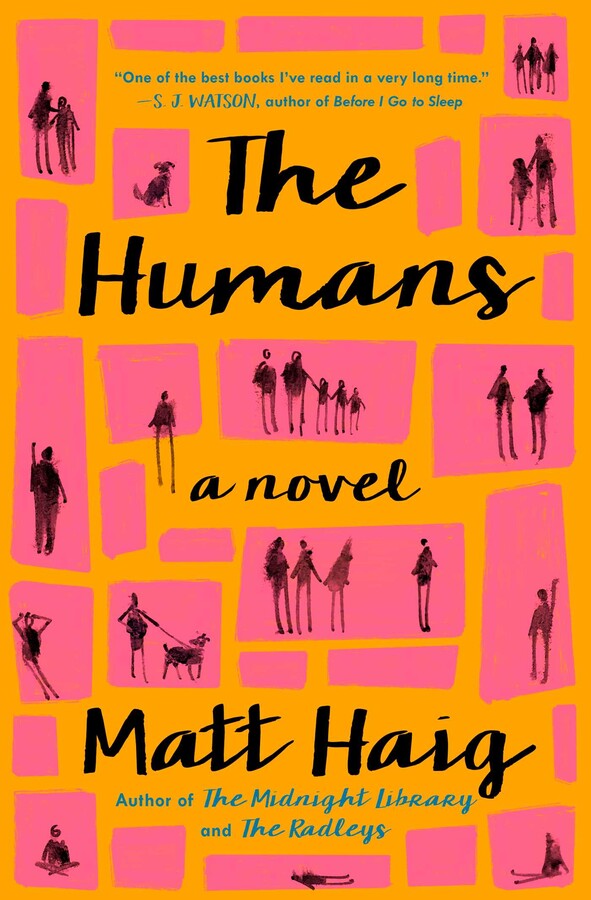 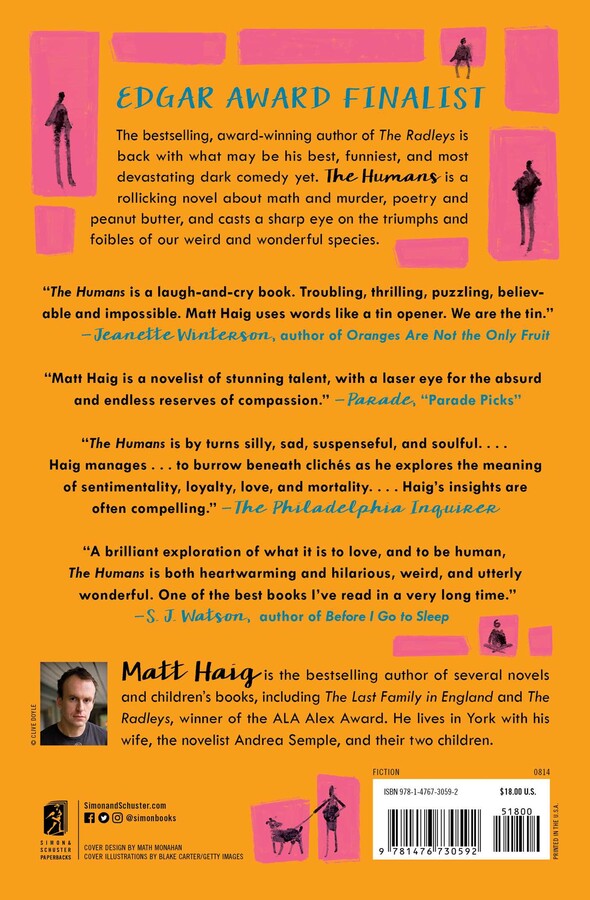 By Matt Haig
LIST PRICE $18.00
PRICE MAY VARY BY RETAILER

When an extra-terrestrial visitor arrives on Earth, his first impressions of the human species are less than positive. Taking the form of Professor Andrew Martin, a prominent mathematician at Cambridge University, the visitor is eager to complete the gruesome task assigned him and hurry home to his own utopian planet, where everyone is omniscient and immortal.

He is disgusted by the way humans look, what they eat, their capacity for murder and war, and is equally baffled by the concepts of love and family. But as time goes on, he starts to realize there may be more to this strange species than he had thought. Disguised as Martin, he drinks wine, reads poetry, develops an ear for rock music, and a taste for peanut butter. Slowly, unexpectedly, he forges bonds with Martin’s family. He begins to see hope and beauty in the humans’ imperfection, and begins to question the very mission that brought him there.

Praised by The New York Times as a “novelist of great seriousness and talent,” author Matt Haig delivers an unlikely story about human nature and the joy found in the messiness of life on Earth. The Humans is a funny, compulsively readable tale that playfully and movingly explores the ultimate subject—ourselves.

By clicking 'Sign me up' I acknowledge that I have read and agree to the privacy policy and terms of use. Free ebook offer available to NEW US subscribers only. Offer redeemable at Simon & Schuster's ebook fulfillment partner. Must redeem within 90 days. See full terms and conditions and this month's choices.
This reading group guide for The Humans includes an introduction, discussion questions, and ideas for enhancing your book club. The suggested questions are intended to help your reading group find new and interesting angles and topics for your discussion. We hope that these ideas will enrich your conversation and increase your enjoyment of the book.

On our unnamed alien hero’s home world, Vonnadoria, mathematics has transformed his people, giving them the ability to create a utopian society where knowledge is limitless and immortality attainable. But when Cambridge professor Andrew Martin cracks the Riemann hypothesis, opening a door to the same technology that the alien’s planet possesses, the narrator is sent to Earth to erase all evidence of the solution and kill anyone who had seen the proof. He struggles to pass undetected long enough to gain access to Martin’s research. But as he takes up the role of Professor Martin in order to blend in with the humans, he begins to see a kind of hope and redemption in the humans’ imperfections, and he questions his marching orders. Mathematics or not, he becomes increasingly convinced that Martin’s family deserves to live, forcing him to confront the possibility of forgoing everything he has ever known and become a human.

1. In the preface, our narrator explains his purpose and asks his people back home to set aside prejudice in the name of understanding. How is this plea to his fictional reader also directed at us, the actual readers? What prejudices must we set aside to understand our alien hero?

2. Our hero’s entrance into human life is . . . rocky, at best. How did his initial impressions of human life—noses, clothes, rain, and Cosmopolitan—shape the rest of his journey? Which of his first disconcerting realizations did you find the most surprising?

3. Starting with the possibility that the purpose of humanity is to “pursue the enlightenment of orgasm,” our hero is constantly seeking the solution to the meaning of human life. What does he eventually conclude, and why? Why does human life provide such a particular problem for a mathematical consciousness?

4. Our narrator muses, “Of course, when viewed afresh, all worlds are strange, but this one must have been strangest of all.” Our narrator’s distinction between things that are simply new, but somewhat logical, and those that are utterly bewildering is one of the novel’s strongest themes. What are the pieces of our world that make the most sense to our narrator, and why?

5. In his life as a human, one of the first bonds the narrator makes will prove to be one of the strongest—with the dog Newton. How does his relationship with Newton ease him into human society? What does that say about humans’ relationships to animals?

6. The Vonnadorians believe that by destroying proof of the Riemann hypothesis, they are saving the cosmos from the ravages of humanity. Do you think humanity would be capable of coexisting peacefully with other space-traveling cultures? Why or why not?

7. The Vonnadorians’ attitude toward the humans is one of scorn and condescension. Different cultures in science fiction stories or movies have different approaches to societies that are less technologically sophisticated than they are—domination or suppression, noninterference, or support are the three main options. Which do you think is right? Why?

8. In his communications with his home world, our narrator is persistently reminded not to think of the humans as individuals but as a collective. Why is this so important to the hosts? What is so dangerous about thinking of humans as individuals? What does this emphasis say about Vonnadorian culture?

9. Throughout the novel, our narrator encounters many different definitions of love. Which of these definitions spoke to you the most? Why? Why is love such a difficult, particularly human, puzzle?

10. The Vonnadorians understand the world through mathematics—think of our narrator’s quest to be strong, “like a prime.” What is the equivalent to mathematics in our own world? Is there one? Why or why not?

11. The narrator’s evolving relationship to Martin’s family is one of the most powerful parts of the novel. How do Isobel and Gulliver help to redeem the human race in the narrator’s view? What unexpected pleasures and joys does being part of a family provide, and how does this help the narrator to understand humanity?

12. Isobel, and especially Gulliver, learn a lot from the new Andrew Martin. How does his outsider’s perspective help them see things in a new way and change their lives for the better?

13. The narrator thinks about kissing: “Like so many human things, it made no sense. Or maybe, if you tried it, the logic would unfold.” What does this say about the role of the emotional, the inexplicable, or the ineffable in human behavior? What about the relationship between emotional behavior and logical behavior?

14. The conversation the narrator has with the hosts at the end of the chapter “I Was a Wasn’t” provides perhaps the central analysis of why humans are so complicated in the novel. Reread that section and discuss. Do you agree that humans are alienated from their true selves? What does this explain (or not) about the human capacity for violence?

15. The narrator’s gradual understanding of humanity includes his appreciation for Emily Dickinson’s poetry, the music of Debussy and the Beach Boys, and peanut butter—but also includes his negotiation of humanity’s darker side, full of violence and shame. How are these two sides of humanity linked in the narrator’s mind? Can you have one without the other?

16. Why does the narrator choose to forgo immortality and mathematical perfection to become a human. Would you have done the same in his stead? Do you agree with his assertion that his world, his heaven, was ultimately empty?

17. The way that the narrator chooses to live his life as a human says a lot about what he values about humanity. What lessons do you take from his attitude toward his finite amount of time on Earth?

2. The theme of an alien as a fish out of water on Earth crops up throughout science fiction. Watch a classic film with you group that explores the same issue, such as The Day the Earth Stood Still, The Man Who Fell to Earth, The Brother from Another Planet, District 9, E.T., The Extra-Terrestrial, and Starman. What does the film you chose say about humanity? How does it resonate, or not, with the themes of The Humans?

3. He’s got some strange ideas, but the narrator sure has it right when it comes to the good parts of being a human. Make some peanut butter sandwiches and tea, and pour some Australian wine to share with your group. 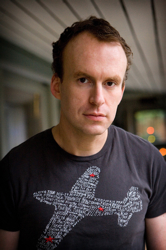 Matt Haig is the bestselling author of several books including the Alex Award–winning The Radleys, Humans, and The Midnight Library. An alumnus of Hull University and Leeds, his work has been translated into twenty-nine languages. He lives in York with his wife, UK novelist Andrea Semple, and their two children.

By Matt Haig
LIST PRICE $18.00
PRICE MAY VARY BY RETAILER