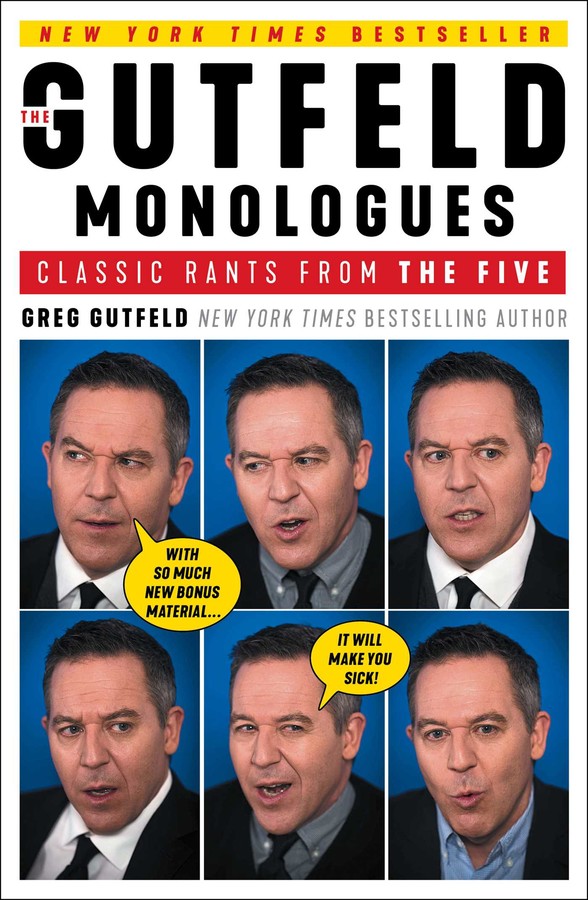 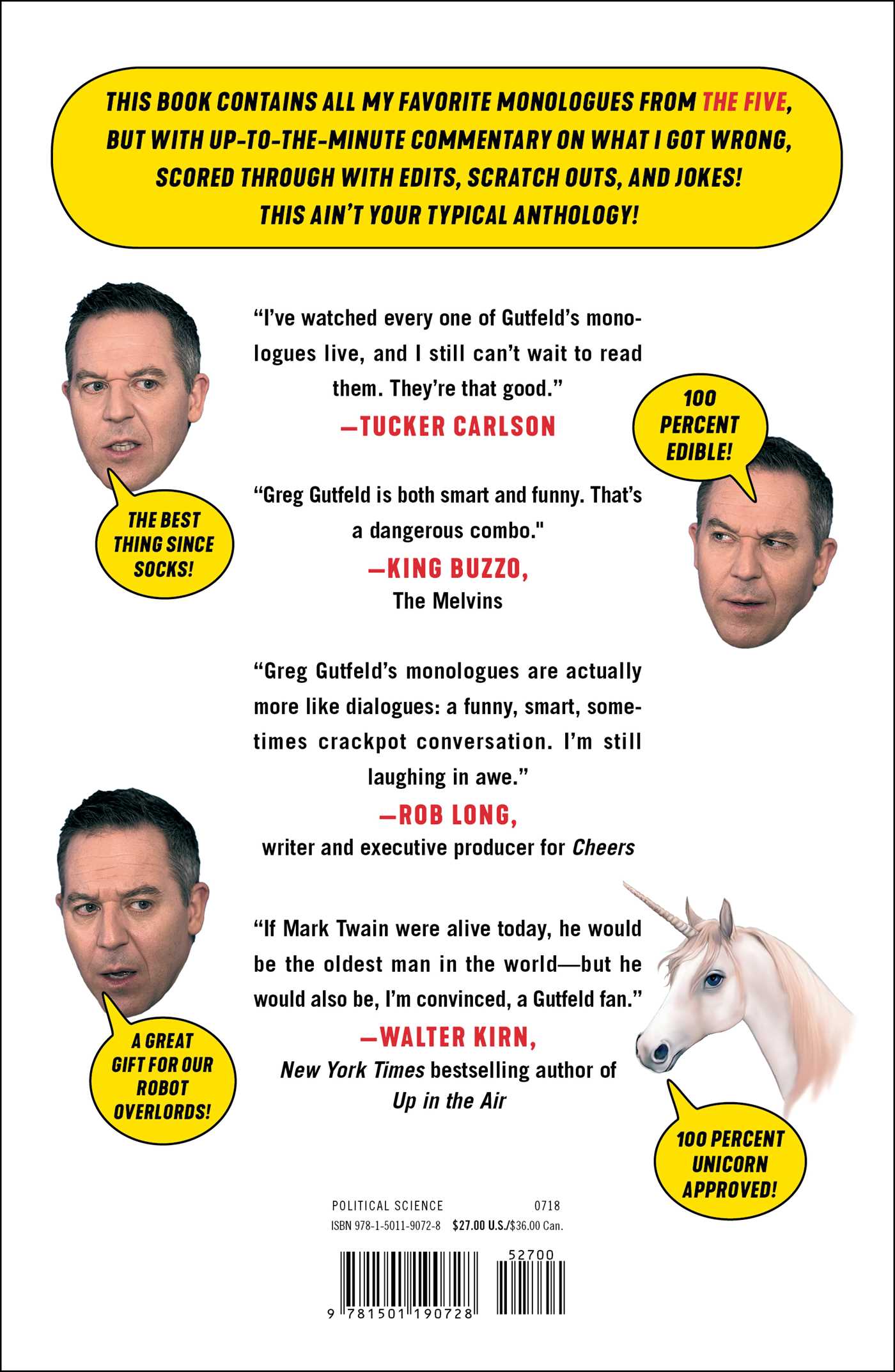 A dynamic and annotated collection of Fox News star and New York Times bestselling author Greg Gutfeld’s sharp, hilarious monologues on everything from politics to pop culture—updated with new commentary for the current day.

“Wherever I go, I am hit repeatedly by the same question: where can I read your monologues? It should be easy to find these little nuggets of knowledge.”

In the past few years, Fox News host Greg Gutfeld has covered everything from crazed academics, to unhinged celebrities, to the wildest election in recent history on his shows The Five and The Greg Gutfeld Show. In The Gutfeld Monologues, he brings together his best and favorite monologues in this funny, unconventional collection for new and longtime fans alike. Scored through with marginal edits, scratch-outs, 20/20 hindsight, and up-to-the-minute commentary on what he got wrong, this book isn’t your grandmother’s anthology collection.

With his signature humor, wit, and insight, Greg explains it all in this memorable collection about some of our country’s most crucial—and not so crucial—modern moments.

The Gutfeld Monologues
INTRODUCTION
Now and Then, and All the Crap in Between
It’s a humbling experience to have written a book called How to be Right, and to then begin a new book by explaining how I got something wrong.

That something was, more precisely, the election of Donald Trump.

Granted, nearly every other living breathing human being got the 2016 election wrong. Hell, even Donald Trump himself wasn’t planning on winning, according to some sources. But I assumed Hillary had it wrapped up—as did Hillary herself, judging by her lethargic behavior. Instead of hitting the places that mattered, she chose to nosh with the most elite, out-of-touch person of them all, Gwyneth Paltrow—which is the equivalent of making out with fruit bats during a rabies outbreak.

But yes, I was wrong on the election.

But oddly right about it, too. How is that possible?

First, because I’m the one writing the book here. When you write a book—it’s absolutely amazing how right you can be, after the fact, about everything!

Note to young writers: The key to becoming a bestselling author is to never write something BEFORE something happens; always after. Good example: the Bible.

Second, I was exactly right on the issues that set the table for the most dramatic, surprising political story since Tracy Flick beat Paul Metzler by one vote at George Washington Carver High School in 1997. (Look it up.) For the past five to six years, on the hit television show The Five, I would deliver a monologue on the issue that I found most important on that particular day. In that monologue, I’d address why that issue was important, break it down, and offer, if not a solution, at least a new way to look at it—which is a solution in itself!

On rare occasions, I might have been wrong—but, like I said ten words ago—it was rare. Of course, hindsight is 20/20, a phrase I coined in the early 1970s.

My batting average was high, when you observe the repudiation of the previous eight years of governance before 2016. That repudiation was a reflection of the issues that I perceived as troubling during that period. I knew what was getting on the average American’s nerves (besides me), and it was stuff that the rest of the media ignored. That was mainly due to the fact that I know what gets on people’s nerves (for the most part, it’s me).

Donald Trump watched Fox News—so he had a firsthand look at the same stuff I was yakking about. I’m not saying he cribbed from me—I’m saying we were both on the same page on a lot of stuff. Not on all stuff—but on some of the big stuff.

Now, some of this introduction is going to feel a little like déjà vu, especially since Trump’s election may be the most revisited topic since the (alleged) moon landing.

But forgive me if we revisit it yet again.

Greg Gutfeld is a New York Times bestselling author, satirist, humorist, and magazine editor. He is the host of The Greg Gutfeld Show and cohost of The Five on Fox News. Prior to joining Fox, Gutfeld was editor of Men’s Health magazine. He later became editor of Stuff, helmed Maxim magazine in the United Kingdom, and was host of the legendary cult TV phenomenon Red Eye. Gutfeld lives in New York City with his wife. Follow Greg on Twitter @GregGutfeld, Facebook @GGutfeld, and Instagram @RealGregGutfeld.

"Greg Gutfeld's monologues are actually more like dialogues: a funny, smart, sometimes crackpot conversation among the many Gregs--the punk rock Greg, the Fox News Greg, the gimlet-eyed Observer Greg, and even the Hipster Libertarian Greg. All of the Gregs are here in the book, in hilarious form, and I'm still laughing in awe."

“I’ve watched every one of Gutfeld’s monologues live, and I still can’t wait to read them. They’re that good.”

"If Mark Twain were alive today, he would be the oldest man in the world-- but he would also be, I'm convinced, a Gutfeld fan."

– —Walter Kirn, New York Times bestselling author of Up in the Air

"Greg Gutfeld is both smart and funny. That's a dangerous combo."