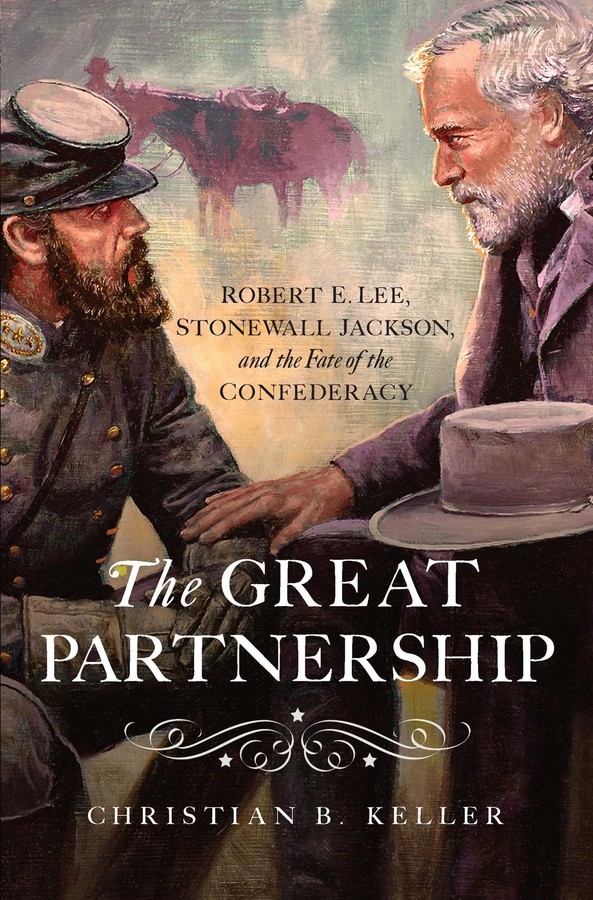 By Christian B Keller
Published by Pegasus Books
Distributed by Simon & Schuster
LIST PRICE $28.95
PRICE MAY VARY BY RETAILER

The story of the unique relationship between Lee and Jackson, two leaders who chiseled a strategic path forward against the odds and almost triumphed.

Why were Generals Lee and Jackson so successful in their partner- ship in trying to win the war for the South? What was it about their styles, friendship, even their faith, that cemented them together into a fighting machine that consistently won despite often overwhelming odds against them?

The Great Partnership has the power to change how we think about Confederate strategic decision-making and the value of personal relationships among senior leaders responsible for organizational survival. Those relationships in the Confederate high command were particularly critical for victory, especially the one that existed between the two great Army of Northern Virginia generals.

It has been over two decades since any author attempted a joint study of the two generals. At the very least, the book will inspire a very lively debate among the thousands of students of Civil War his- tory. At best, it will significantly revise how we evaluate Confederate strategy during the height the war and our understanding of why, in the end, the South lost.

"Students of strategy and tactics, as well as of the Civil War, will find this a useful look at a storied partnership."

"In The Great Partnership, Christian B. Keller re-examines the professional and personal relationship between the two gray chieftains. Mr. Keller, a professor of history at the U.S. Army War College, has written an intriguing blend of battlefield history, leadership manual, and character portrait of Lee and Jackson. The Great Partnership makes clear that Civil War history remains haunted by the ghost of Stonewall Jackson."

"The partnership of Robert E. Lee and Stonewall Jackson reshaped the course of the Civil War in the East in a span of roughly a year from the spring of 1862 to the latter's death in May 1863.  The two men crafted a powerful working relationship based upon their deep religious faith, shared strategic views, and ultimate trust in each other. In his The Great Partnership, Christian Keller explores anew this well-studied relationship in a fresh, insightful, and persuasive work.  This book will kindle debate, generate controversy, and reframe old arguments. Simply put, it is good history."

"Christian B. Keller’s assessment of Robert E. Lee and ‘Stonewall' Jackson reminds us that command relationships profoundly shaped the course of the Civil War. His analysis of Jackson’s contribution to the partnership, the impact of operations in the Eastern Theater, and the degree to which personal and professional ties intersected should spark a good deal of discussion among those interested in the Confederacy’s premier army and its most famous commanders."

– Gary W. Gallagher, author of 'Lee and His Army in Confederate History'

"With The Great Partnership, historian Christian Keller has given us an elegantly written, refreshingly original, and thoroughly convincing assessment of the command relationship between Robert E. Lee and Stonewall Jackson, as well as the lessons it provides to modern leaders. In so doing, Keller demonstrates most convincingly that in able hands it remains possible to distill groundbreaking interpretations from even such iconic, heavily traveled Civil War topics as Lee and Jackson. I highly recommend The Great Partnership both to general readers and students of the war."

– Peter Cozzens, author of 'The Earth is Weeping: the Epic Story of the Indian Wars for the American West and Shenandoah 1862: Stonewall Jackson's Valley Campaign'

"Christian Keller cuts through the Lost Cause haze and a century of debate to give us our clearest view yet of arguably the most important and effective partnership of the American Civil War. He argues persuasively for both the strategic and cultural importance of the Lee-Jackson combine, offering along the way much for modern leaders and students to consider. Dr. Keller weaves narrative and analysis brilliantly, artfully spanning the rarely crossed chasm between academic and public history. This is an important, thoughtful book, well done."

– John Hennessy, author of 'Return to Bull Run: The Campaign and Battle of Second Manassas'

"A masterpiece of original and seminal historical scholarship."

By Christian B Keller
Published by Pegasus Books
Distributed by Simon & Schuster
LIST PRICE $28.95
PRICE MAY VARY BY RETAILER