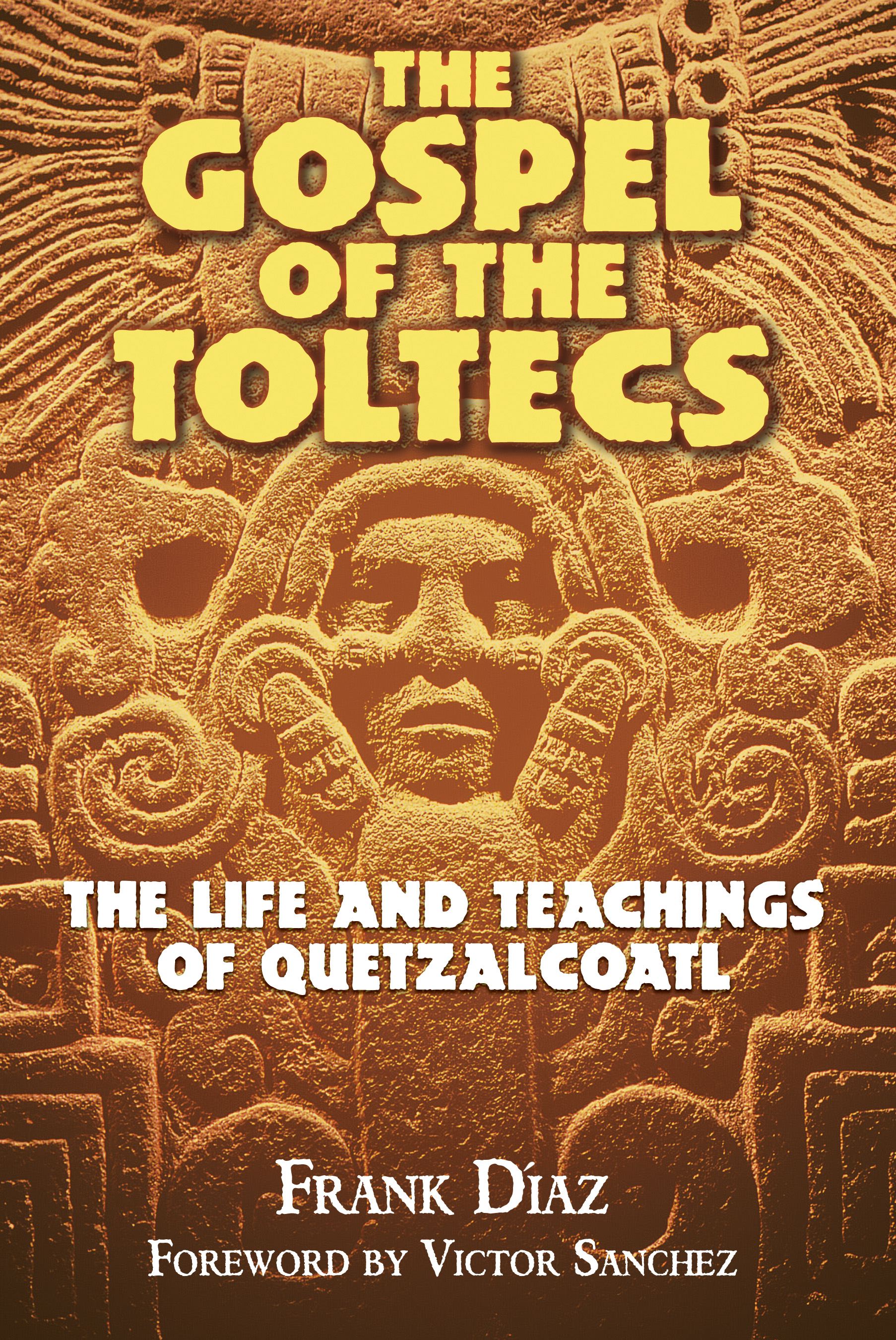 A compilation of the teachings of Quetzalcoatl, avatar of the Toltecs, reconstructed from original source texts and the legends told at his birthplace in Amatlan, Morelos, Mexico.

• The first complete historical account of the life and teachings of Quetzalcoatl, the most important figure in Mesoamerican spirituality.

Quetzalcoatl Ce Acatl (born in A.D. 947)--whose stature has been compared to that of Christ, Buddha, and Krishna--was the key figure in the development of the spiritual culture of the Toltecs. In The Gospel of the Toltecs the author has gathered Nahua and Maya codexes, Spanish chronicles of conquest, and native oral tradition to recount the life of Quetzalcoatl: his temptation and fall; his initiation with sacred mushrooms; his long journey in search of spiritual enlightenment; his triumphant return to the Toltec land; and his subsequent teaching, self-immolation, ascension, and promise of return.

Quetzalcoatl's teachings make up the Toltecayotl, or Toltequity--the art of intentional doing--which provides an initiatic guide for the transformation of individuals and society, while his personal history is a guide for the development of Nahualli, the magical side of human awareness. For all those who wish to deepen their knowledge of the roots of Toltec spirituality or who wish to grow from the teachings of one of the world's great spiritual leaders, The Gospel of the Toltecs offers a unique and authentic access to the life and ministry of one of the most important figures in the ancient world.

1. The moment had come. All the earth was delivered to the service of the house of god! Paper flags with butterflies of fire were raised everywhere. The men were standing, facing the four directions. Never before had such a sacrifice as this been prepared.

2. The face of the penitent was shining with the mark of God. But his friends were somber because, while readying the firewood temple, it became clear to them who was destined for the offering.

3. Observing their dejection, Ce Acatl gathered them around and told them: "Do not cry, my friends. I am a created being. I, the priest, should also stain myself with the dark red of blood."

4. Timal the warrior, driven by love, embraced Ce Acatl's knees and said to him: "Oh elder brother, prince of presages, sorcerer, you are leaving forever! That is why I cry. Now, send me with you to that mysterious place where you rule!"

5. But Ce Acatl made him rise and told him: "I came to rule mountains. Was it not written in your books long ago that I was to become a painter of souls, giver of life? Wake up, man, the sky is reddening, the sun is rising. The birds of fire are already singing; everywhere the sun's butterflies are stirring!"

6. He then gave the signal to his assistant. Quickly they dressed him with his royal insignias and dressed him with the green mask and the marvelous cloth embroidered with serpents. So arrayed, he walked toward the pyramid of timber.

7. As he ascended, he sang for himself: "In the temple of fire a man will be offered. Ah! A man must be offered. You go with sad lament to the land where somehow someone exists. You were celebrated, you pronounced divine words, but you are going to die. The one who is all compassion in truth demands this strange thing!"

8. On arriving at the sanctuary, he contemplated for the last time those who accompanied him. A deep silence reigned in the camp. It was the eighth house of the night, the house of masks. The sun was rising.

9. In his silence Ce Acatl heard his mother's voice urging him: "The night of ecstasy has come. Why do you reject it? The dawn of your triumph is rising. Sacrifice yourself now! Put on your dress of gold!"

10. He, acting alone, then set himself on fire. He raised his hands, lighting the whole temple at once, and he burned himself.

1. When he burned, his ashes were lifted up on the spot. And all the beautiful birds that fly in the sky, those that were sent for his final hour, came to see them: golden birds, black birds, long-feathered birds with necks that stretched, birds that chanted beautifully and that flew serenely, and butterflies too. They all came.

2. Then there could be heard a great storm with rumbling thunder that spread over all the earth. A shadow hid the face of the sun, a rain of flowers whirled and fell. And the one for whom we all live came to hover over the land.

3. At that moment Ce Acatl's heart rose from the ashes, luminescent like a precious jade, and entered into heaven, escorted in the wind by the birds and butterflies.

4. The elders say that he became the morning star. They also say that this star only appeared after the death of the king, who, for this reason, is called Tlahuizcalpantecuhtli.1

1. When the pages saw how sadly the people were contemplating the remains of the bonfire, they felt sympathy for them. So they gathered everyone around a stone, and when they were assembled, Macuilxochitl climbed to the top of it and spoke:

2. "Believe this, brothers, and do not torment yourselves: High in the temple, over his own shield, the one who descended transformed himself. He offered his heart in place of the honest word. It was him, the foreigner with the beaded necklace, truly it was him, the one we were waiting for, the feathered serpent!

3. "See: His breast opened like a flower and his heart ascended. He offered himself in a foreign country, in a strange land. With his royal staff and the sacred book he offered himself for us and for strangers, oh brothers!

4. "Our lord has departed. His body was broken. But his heart already flies toward the seven caverns, to the place of origin, there were the acacia is standing, where the eagle calls and the tiger roars, the place of his divine grandparents, the place that inspires veneration.

5. "Do not cry! He reached life. In the temple of fire he made war and won. He was born out of himself and became a son of gods. Thus we shall remember him forever.

6. "Firebird, wind of the sun, he flies in the middle of the great plains, toward the mystery. His heart has reached the heart of the heavens. Let his light be resplendent! Let happiness dwell in every good man!"

7. Then they gathered Ce Acatl's ashes and put them in bags of tiger skin so that they could be distributed all over the earth. The lords received these relics with great respect, and from that time they have revered them to honor his memory.

Frank Diaz is an anthropological investigator focusing on shamanic studies, Nahuatl language, and Mesoamerican traditions. His other books include Quetzalcoatl's Avatars and Toltec Wisdom: The Original Teachings of Quetzalcoatl. Born in Cuba, he currently lives in Mexico and teaches classes on Toltec traditions at Cuernavaca University.

"With more than 85 illustrations from an original codex, The Gospel of the Toltecs truly meets its objective of teaching the secrets of the Toltecs, since in the indigenous cultures it was common to teach through the pictography. We all know that a simple picture can say more than 1000 words."

"Frank Diaz writes with great clarity and detail about the heroic drama of Quetzalcoatl in a way that shows him to be both grandly universal and an exemplar for all human beings If people wonder what was this wisdom of the Toltecs, then they should start by reading this brilliantly informed and inspiring text."

– Dr. José Argüelles, author of Time and the Technosphere, The Mayan Factor, and Earth Ascen

"This work is a milestone. Wisdom from surviving codices of an ancient mystical tradition becomes available, understandable, and cogent to a spiritually seeking public."

"With The Gospel of the Toltecs, Frank Díaz has provided cornerstone research that will guide the footsteps of those who seek to unravel one of the most compelling philosophies known today."

"This is a very different book that should be read by any serious shamanic student."