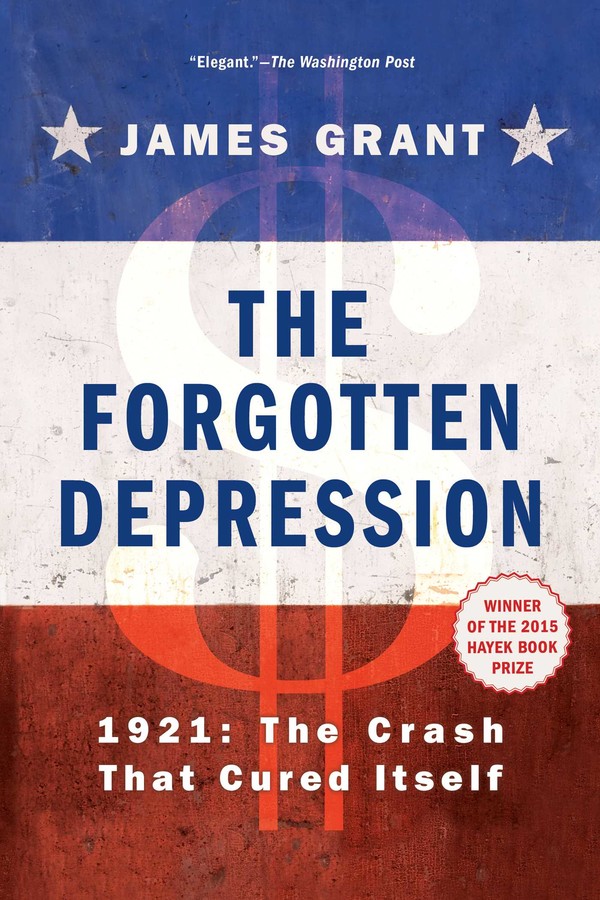 By James Grant
LIST PRICE $13.99
PRICE MAY VARY BY RETAILER

In 1920-1921, Woodrow Wilson and Warren G. Harding met a deep economic slump by seeming to ignore it, implementing policies that most twenty-first century economists would call backward. Confronted with plunging prices, wages, and employment, the government balanced the budget and, through the Federal Reserve, raised interest rates. No “stimulus” was administered, and a powerful, job-filled recovery was under way by late 1921. Yet by 1929, the economy spiraled downward as the Hoover administration adopted the policies that Wilson and Harding had declined to put in place.

In The Forgotten Depression, James Grant “makes a strong case against federal intervention during economic downturns” (Pittsburgh Tribune Review), arguing that the well-intended White House-led campaign to prop up industrial wages helped turn a bad recession into America’s worst depression. He offers examples like this, and many others, as important strategies we can learn from the earlier depression and apply today and to the future. This is a powerful response to the prevailing notion of how to fight recession, and “Mr. Grant’s history lesson is one that all lawmakers could take to heart” (Washington Times). 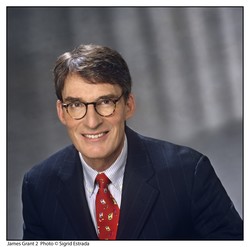 courtesy of the author
James Grant

James Grant is the founder of Grant’s Interest Rate Observer, a leading journal on financial markets, which he has published since 1983. He is the author of seven books covering both financial history and biography. Grant’s journalism has been featured in Financial Times, The Wall Street Journal, and Foreign Affairs. He has appeared on 60 Minutes, Jim Lehrer’s News Hour, and CBS Evening News.

"Mr. Grant is an excellent writer, and The Forgotten Depression is a carefully researched history of this dramatic episode. . . . Mr. Grant's chronicle makes difficult economic concepts easy to understand, and it deftly mixes major events with interesting vignettes. . . . People who believe in the inadequacy of the current macroeconomic orthodoxy will find him to be an articulate spokesman."

“Grant engagingly tells the tale of this extraordinary episode, which has been shoved down the memory hole because it doesn't comport with reigning economic orthodoxy.”

“The Forgotten Depression is a loving tribute to laissez-faire . . . Grant pens his tale with a wry humor reminiscent of John Kenneth Galbraith in The Great Crash. . . . a timely reminder that our forebears knew of other, more efficacious, remedies to cure financial hangovers than the hair of the dog.”

“A riveting and instructive tale. . . . the depression of 1920-21 has not received the scrutiny it deserves. The instructive lesson of the story is that the federal government “met the downturn by seeming to ignore it—or by implementing policies that an average 21st century economist would judge disastrous”—and the hands-off approach actually worked. . . . Once read, The Forgotten Depression will be hard to forget.”

“Grant unearths a forgotten depression to pose the iconoclastic argument that the government’s best response to economic turmoil is to keep its hands off. A veteran financial writer, Grant handles abstruse issues with a light touch and a sure hand, gleaning wisdom in such unexpected figures as Charles Dawes, first director of the federal budget, and Warren G. Harding.”

“Are markets self-correcting? What, if any, role should government play when the Hidden Hand falters? Even as much of the world struggles through The Great Recession, James Grant offers a libertarian dissent from interventionist dogma. You don’t have to agree with Grant’s economics to admire the rigor of his thought, the grace of his prose, or the sweep of his argument contrasting what went right in the 1920s, and wrong in the 1930s. This is a true rarity, a first-rate work of history that is as relevant as the morning headlines.”

– Richard Norton Smith, author of On His Own Terms: A Life of Nelson Rockefeller and An Uncommon Man: The Triumph of Herbert Hoover

“It is a matter of libertarian faith that the Great Depression was prolonged rather than alleviated by Keynesian economic policy, and Grant's intent is clear: The invisible hand reigns supreme, the market knows what's good, and government meddling usually ends badly. . . . interesting reading indeed.”

"[An] amusing economic history of the Progressive Era."

“Mr. Grant’s history lesson is one that all lawmakers could take to heart.”

By James Grant
LIST PRICE $13.99
PRICE MAY VARY BY RETAILER