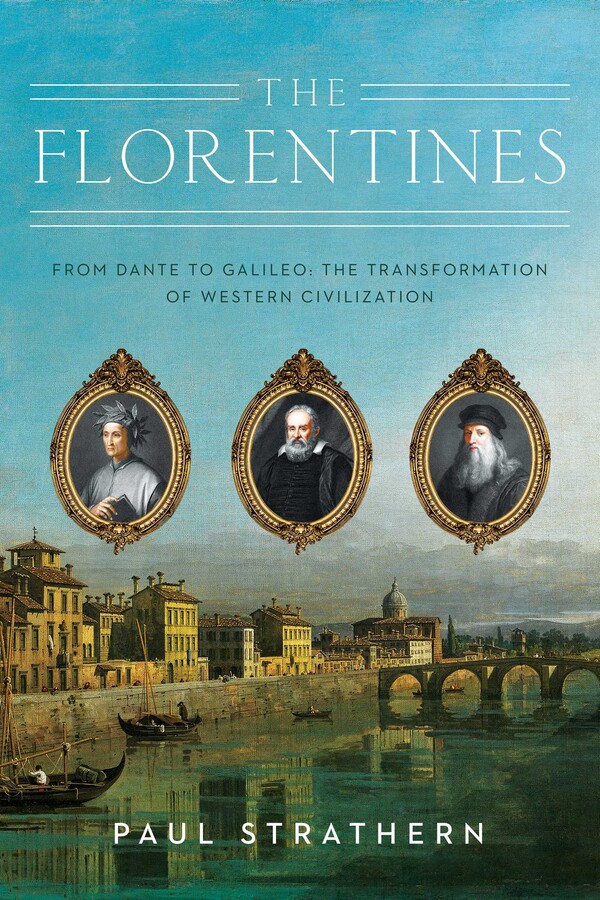 From Dante to Galileo: The Transformation of Western Civilization

A sweeping and magisterial four-hundred-year history of both the city and the people who gave birth to the Renaissance.

Between the birth of Dante in 1265 and the death of Galileo in 1642, something happened that transformed the entire culture of western civilization. Painting, sculpture, and architecture would all visibly change in such a striking fashion that there could be no going back on what had taken place. Likewise, the thought and self-conception of humanity would take on a completely new aspect. Sciences would be born—or emerge in an entirely new guise.

The ideas that broke this mold began, and continued to flourish, in the city of Florence in northern central Italy. These ideas, which placed an increasing emphasis on the development of our common humanity—rather than other-worldly spirituality—coalesced in what came to be known as humanism. This philosophy and its new ideas would eventually spread across Italy, yet wherever they took hold they would retain an element essential to their origin. And as they spread further across Europe, this element would remain.

Transformations of human culture throughout western history have remained indelibly stamped by their origins. The Reformation would always retain something of central and northern Germany. The Industrial Revolution soon outgrew its British origins, yet also retained something of its original template. Closer to the present, the IT revolution that began in Silicon Valley remains indelibly colored by its Californian origins. Paul Strathern shows how Florence, and the Florentines themselves, played a similarly unique and transformative role in the Renaissance.

Paul Strathern is a Somerset Maugham Award-winning novelist, and his nonfiction works include The Venetians, Death in Florence, The Medici, Mendeleyev's Dream, and The Borgias, all available from Pegasus Books. He lives in England.

"Novelist and historian Paul Strathern (The Venetians, The Medicis), has written a marvelous, wide-ranging, and accessible history of Florence and the historical giants from the city that have influenced the course of western civilization. There should be more history books like The Florentines to delve in specific time periods and geographic locations. It is not just the intrinsically interesting period that Strathern delves into that makes this a truly excellent book, but his skill at understanding and connecting the people and ideas of the time."

– The Interim, Book of the Week

“The Florentines [is] a thought-provoking re-examination of the great Florentine artists, scientists and business wizards of the Renaissance. Mr. Strathern’s book is a work of dissemination, a popular introduction to its subject…[it provides] its author with the option to recast an entire field of study in a somewhat unexpected way, as if seen from an altered angle. Strathern has an engaging habit of dwelling on the close connection in the Florentine cultural sphere between art and money, matters seldom so intimately juxtaposed…his prose glimmers with the spark of rekindled discovery.”

“Drawing on subjects covered in previous books, Strathern meticulously guides readers through the lives of famous Renaissance visionaries…this book doesn’t just describe each individuals’ accomplishments, but also shows how their lives full of shared experiences and unique circumstances were intricately intertwined in a way which positioned them to lead Europe into the Renaissance. Bringing the Renaissance into better focus, this well-researched work is highly recommended for readers with an interest in the era, art history, and Italian history.”

"Strathern paints an accessible portrait of Renaissance-era Florence as a city of “revolutionary” ideas where geography, a burgeoning banking industry, and luck contributed to the evolution of humanism, artistic breakthroughs, and the scientific revolution. Buoyed by incisive details and a brisk pace, this is a welcome introduction to the city and the personalities behind the Renaissance."

"Novelist and historian Strathern returns to Renaissance Florence to survey the graces and disgraces of the city and its people. If Vanity Fair magazine had existed during the Renaissance, every issue might have brought tales of Florentine A-listers and their power plays, artistic triumphs, sexual exploits, and financial chicanery. Strathern aims to show how such Florentines paved the way for a global humanism focused on people’s lives on Earth instead of on the medieval view that existence was only preparation for an afterlife.  Strathern is an intellectually agile writer who covers four centuries briskly—and serves up occasional surprises.”

Praise for Paul Strathern’s The Borgias:

"Historians who seek a wide readership, while giving their readers the drama they crave, must honor the historical record in all its complexity. The Borgias presents just such a nuanced account. Authoritative and well-written. Strathern has an admirable talent for the biographical sketch, particularly of artists and writers.”

"Rich in telling details. The Borgias’ ambition was boundless; their legacy proved to be enormous. Not without reason did Machiavelli make Cesare the hero of The Prince."

"In this accessible look behind the curtain, Strathern lays out the history of the infamous Italian clan. Strathern makes a tangled and thorny history readable."

“An engaging and informative history of a notorious family.  A magnet for all who are intrigued by this infamous clan and everyone versed in European history who is looking for a new perspective, this is an outstanding account.”

"Strathern's latest venture into Renaissance Italy proves just as exciting as his previous histories. Strathern's smooth narrative and comprehensive insight bring the Borgias to life for scholars and amateurs alike."

From Dante to Galileo: The Transformation of Western Civilization