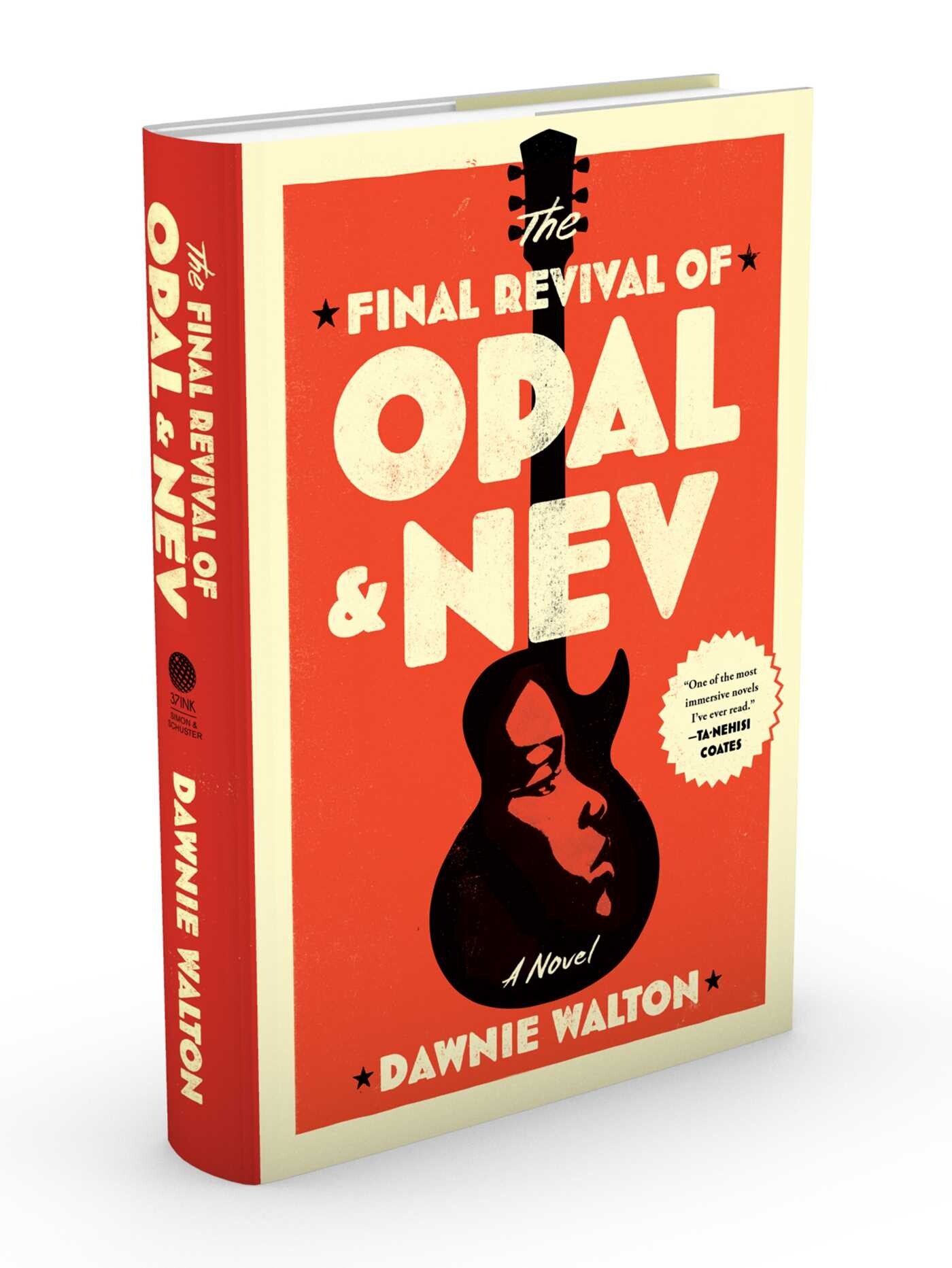 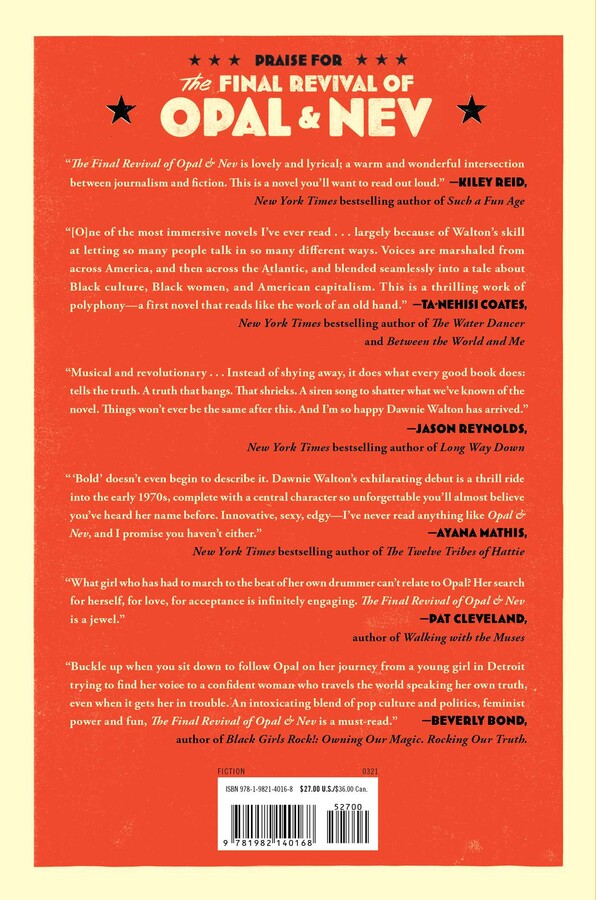 How Restoring Black Women to Rock History Inspired The Final...

The Story of Opal & Nev's Final Revival | Behind the Music

Behind the Music – The Story of Opal & Nev's Final Revival

By Dawnie Walton
LIST PRICE $27.00
PRICE MAY VARY BY RETAILER

An electrifying novel about the meteoric rise of an iconic interracial rock duo in the 1970s, their sensational breakup, and the dark secrets unearthed when they try to reunite decades later for one last tour.

“Feels truer and more mesmerizing than some true stories. It’s a packed time capsule that doubles as a stick of dynamite.” —The New York Times Book Review

“One of the most ​immersive novels I’ve ever read….This is a thrilling work of polyphony—a first novel, that reads like the work of an old hand.” —Ta-Nehisi Coates, New York Times bestselling author of The Water Dancer and Between the World and Me

Opal is a fiercely independent young woman pushing against the grain in her style and attitude, Afro-punk before that term existed. Coming of age in Detroit, she can’t imagine settling for a 9-to-5 job—despite her unusual looks, Opal believes she can be a star. So when the aspiring British singer/songwriter Neville Charles discovers her at a bar’s amateur night, she takes him up on his offer to make rock music together for the fledgling Rivington Records.

In early seventies New York City, just as she’s finding her niche as part of a flamboyant and funky creative scene, a rival band signed to her label brandishes a Confederate flag at a promotional concert. Opal’s bold protest and the violence that ensues set off a chain of events that will not only change the lives of those she loves, but also be a deadly reminder that repercussions are always harsher for women, especially black women, who dare to speak their truth.

Decades later, as Opal considers a 2016 reunion with Nev, music journalist S. Sunny Shelton seizes the chance to curate an oral history about her idols. Sunny thought she knew most of the stories leading up to the cult duo’s most politicized chapter. But as her interviews dig deeper, a nasty new allegation from an unexpected source threatens to blow up everything.

Provocative and chilling, The Final Revival of Opal & Nev features a backup chorus of unforgettable voices, a heroine the likes of which we’ve not seen in storytelling, and a daring structure, and introduces a bold new voice in contemporary fiction.

Dawnie Walton is a fiction writer and journalist whose work explores identity, place, and the influence of pop culture. She has won fellowships from the MacDowell Colony and the Tin House Summer Workshop, and earned her MFA from the Iowa Writers’ Workshop. Previously she worked as an executive-level editor for magazine and multimedia brands including Essence, Entertainment Weekly, Getty Images, and LIFE. A native of Jacksonville, Florida, she lives with her husband in Brooklyn.

"Dawnie Walton's The Final Revival Of Opal & Nev is one of the most immersive novels I've ever read. This is largely because of Walton's skill at letting so many people talk in so many different ways. Voices are marshalled from across America, and then across the Atlantic, and blended seamlessly into a tale about black culture, black women American capitalism. This is a thrilling work of polyphony—a first novel, that reads like the work of an old hand." — Ta-Nehisi Coates, New York Times bestselling author of The Water Dancer and Between the World and Me

"The Final Revival of Opal & Nev is lovely and lyrical; a warm and wonderful intersection between journalism and fiction. This is a novel you'll want to read out loud. It's made for readers and music lovers who find themselves wishing that Behind The Music was still on the air." — Kiley Reid, New York Times bestselling author of Such a Fun Age

"Walton’s fabulous debut novel is an utterly fresh take on finding one’s voice, on systemic racism and sexism, and on freedom of expression. That these heavy subjects don’t weigh down this hugely entertaining novel are testament to Walton’s deftness and skill." — O Magazine, Most Anticipated Books of 2021

"[A] spectacular debut... Walton pumps up the volume with a fresh angle on systemic racism and freedom of expression. This is a firecracker." — Publisher's Weekly (starred review)

“The Final Revival of Opal & Nev is as musical and revolutionary in tone and structure as it is in content. It delves into the complexities of the creative life, specifically as it pertains to Black women, and instead of shying away or egg-shelling, it does what every good book does: tells the truth. A truth that bangs. That shrieks. A siren song to shatter what we’ve known of the novel. Things won’t ever be the same after this. And I’m so happy Dawnie Walton has arrived.” —  Jason Reynolds, New York Times bestselling author of A Long Way Down

“'Bold' doesn’t even begin to describe it. Dawnie Walton's exhilarating debut is a thrill ride into the Afro-punk 1970s complete with a central character so unforgettable, you'll almost believe you’ve heard her name before.  Innovative, sexy, edgy— I’ve never read anything like Opal & Nev, and I promise you haven't either." — Ayana Mathis, New York Times bestselling author of The Twelve Tribes of Hattie

"As a DJ, model, producer, cultural curator,  entrepreneur, artist and activist,  I’ve always had to pave my own path and go where the naysayers said was not possible. So to encounter a woman with a similar vibe, who confidently sets her own path was thrilling to read about. Buckle up when you sit down to follow Opal on her journey from a young girl  in Detroit who is trying to find her voice to a confident woman who travels the world speaking her own truth, even when it gets her in trouble. An intoxicating blend of pop culture and  politics, feminist power and fun,  The Final Revival of Opal & Nev is a must read."  — Beverly Bond, author of Black Girls Rock: Owning Our Magic, Rocking Our Truth, creator, executive producer of BLACK GIRLS ROCK!

"What girl who has had to march to the beat of her own drummer can't relate to Opal. I'm partial to the passages in Paris where the Battle of Versailles is recreated but I also loved the scenes in Detroit, the American South, and New York City's Harlem and Greenwich Village. Opal's search for herself, for love, for acceptance is infinitely relatable.  The Final Revival of Opal & Nev is a jewel." — Pat Cleveland, author of Walking with the Muses

“Like the best fiction, [The Final Revival of Opal & Nev] feels truer and more mesmerizing than some true stories. It’s a packed time capsule that doubles as a stick of dynamite."—New York Times

“[Opal] is a champion for people who have suffered discrimination, bullying, and marginalization, and she is fierce and sticks to her convictions, no matter the consequences to her career…Walton has penned a true wonder of a debut novel.”—Library Journal, *starred review*

“Music is at the heart of The Final Revival of Opal & Nev, and Walton makes us love these musicians in the same way that we love our favorite bands. She uses this love to dig deeper, grappling with racism and other sinister themes to reveal the true essence of rock ’n’ roll. It’s not just about sex and drugs and parties; it’s a way to express the complexity and sadness of our everyday lives. Using music to cope is glorious and human, and Walton doesn’t just cope—she triumphs.”—BookPage

“[A] striking debut...Walton brings rock and roll to life in this powerful story of art and activism’s intersections.”—Esquire, Best of 2021 (so far)

By Dawnie Walton
LIST PRICE $27.00
PRICE MAY VARY BY RETAILER