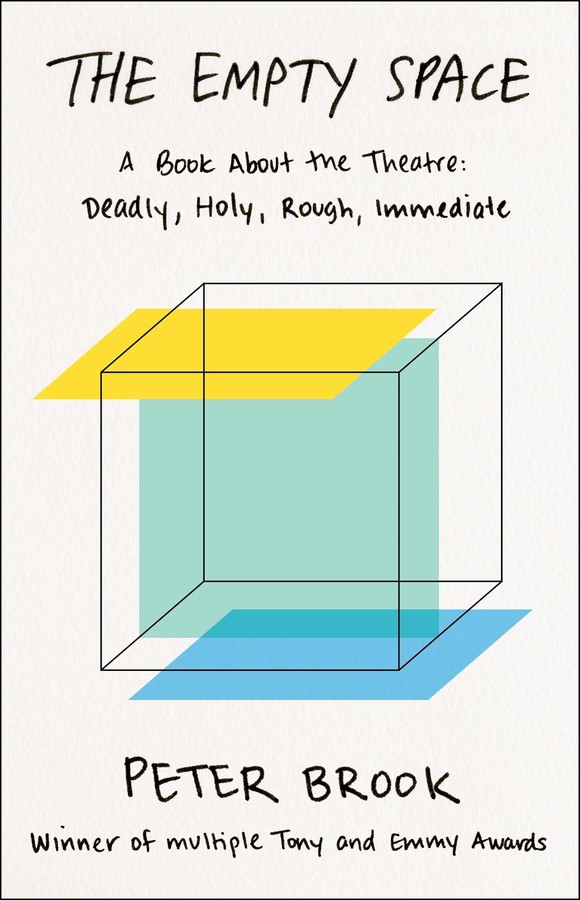 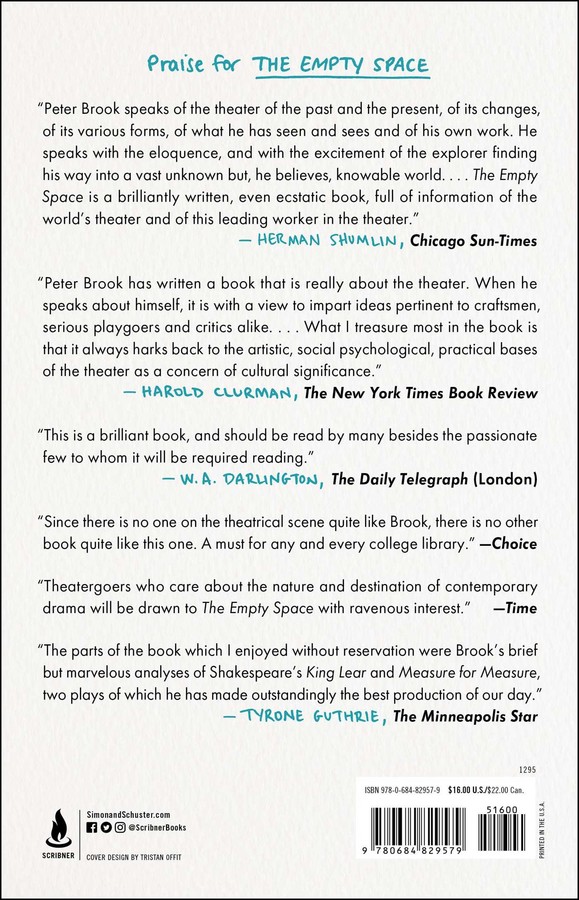 A Book About the Theatre: Deadly, Holy, Rough, Immediate

By Peter Brook
LIST PRICE $16.00
PRICE MAY VARY BY RETAILER

From director and cofounder of the Royal Shakespeare Company Peter Brook, The Empty Space is a timeless analysis of theatre from the most influential stage director of the twentieth century.

As relevant as when it was first published in 1968, groundbreaking director and cofounder of the Royal Shakespeare Company Peter Brook draws on a life in love with the stage to explore the issues facing a theatrical performance—of any scale. He describes important developments in theatre from the last century, as well as smaller scale events, from productions by Stanislavsky to the rise of Method Acting, from Brecht’s revolutionary alienation technique to the free form happenings of the 1960s, and from the different styles of such great Shakespearean actors as John Gielgud and Paul Scofield to a joyous impromptu performance in the burnt-out shell of the Hamburg Opera just after the war.

Passionate, unconventional, and fascinating, this book shows how theatre defies rules, builds and shatters illusions, and creates lasting memories for its audiences.

Peter Brook is one of the world’s best-known theatre directors. Outstanding in a career full of remarkable achievements are his productions of Titus Andronicus (1955) with Laurence Olivier, King Lear (1962) with Paul Scofield, and The Marat/Sade (1964) and A Midsummer Night’s Dream (1970), both for the Royal Shakespeare Company.

Since moving to Paris and establishing the International Centre for Theatre Research in 1970 and the International Centre for Theatre Creation when he opened the Bouffes du Nord in 1974, he has produced a series of events which push at the boundaries of theatre, such as Conference of the Birds (1976), The Ik (1975), The Mahabharata (1985), and The Tragedy of Carmen (1981) to name but a few.

His hugely influential books, from The Empty Space (1968) to The Quality of Mercy (2013) and Tip of the Tongue (2017), have been published in many languages throughout the world.

“Peter Brook has written a book that is really about the theater. When he speaks about himself, it is with a view to impart ideas pertinent to craftsmen, serious playgoers and critics alike…What I treasure most in the book is that it always harks back to the artistic, social psychological, practical bases of the theater as a concern of cultural significance.”

“This is a brilliant book, and should be read by many besides the passionate few to whom it will be required reading.”

“Theatergoers who care about the nature and destination of contemporary drama will be drawn to The Empty Space with ravenous interest.”

“The parts of the book which I enjoyed without reservation were Brook’s brief but marvelous analyses of Shakespeare’s King Lear and Measure for Measure, two plays of which he has made outstandingly the best production of our day.”

"A classic...a hugely influential analysis of the problems confronting contemporary theatre. It's a powerful expression of the belief that it is performance, not a play text in the abstract, that is the essence of stage art."

A Book About the Theatre: Deadly, Holy, Rough, Immediate

By Peter Brook
LIST PRICE $16.00
PRICE MAY VARY BY RETAILER