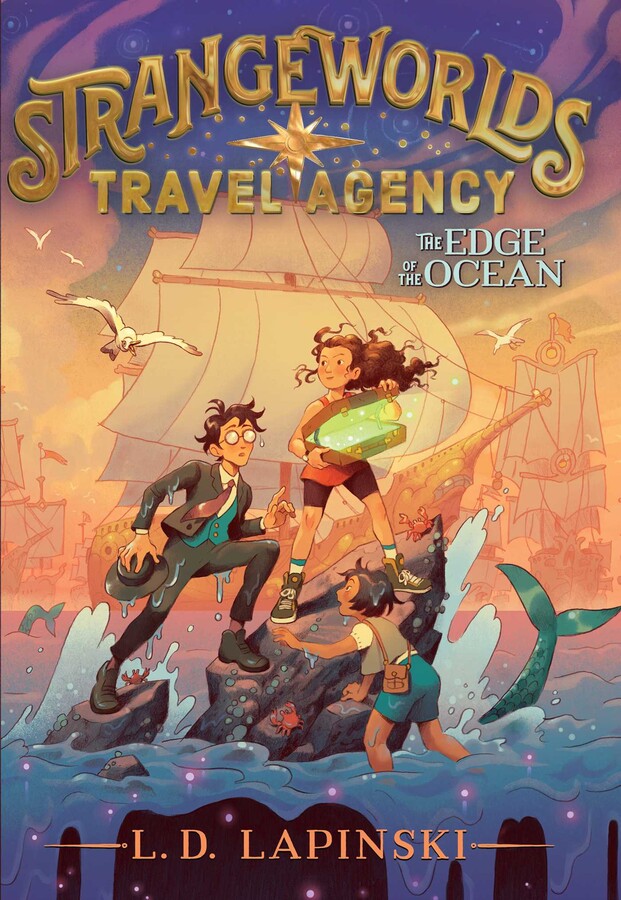 The Edge of the Ocean

Flick tries to save a watery world from total destruction in this magical second book in the Strangeworlds Travel Agency series.

Flick is now a badge-wearing member of the Strangeworlds Travel Agency, so when an urgent summons arrives at from Pirate Queen Nyfe, she and Strangeworlds Society guardian Jonathan immediately pack their bags for an adventure to The Break, a world of magic and piracy.

Nyfe’s world is falling apart. The Break is used to having ships vanish without a trace, but there has been a sudden increase that can’t be explained by giant squid or merpeople. The edge of their flat world is coming ever closer to them and they need to escape before it collapses entirely.

But how do you sail a ship through a suitcase? Or fit in a mer-queen the size of a whale? Flick and Jonathan must find a way to transport the inhabitants of the Break to another world before theirs disappears forever.

1
Flick twirled the magnifying glass between her fingers. The brass handle was speckled with little marks and imperfections. There was a deep scrape close to the round lens, there were little scratches running down the slender, pen-like handle, and a dark smudge of something that refused to budge, no matter how often Flick cleaned it.

She looked over the little instrument, not through the glass itself for the moment, enjoying the anticipation. Looking through the magnifier was a treat to be savored.

She spun the handle quickly, tripping it through her fingers in a practiced movement that she’d spent far too many nights perfecting. She was lying on her bed, the pink glow from the agate slice on top of her old lamp lighting up the room in a way that reminded her of the gentle glow of a forest made of crystal and magic, a whole other world away. A world she had walked in.

Flick closed her eyes and took a steadying breath. Then she raised the magnifying glass to her right eye, keeping her left closed. The first time she had tried this, lying on her bed, she had dropped the instrument on her head.

To look through it—if you had the right gift—was to see a hidden magic. Quite literally. And as Flick looked through it, she smiled.

The air around her swarmed with magic. Glittering, golden, white-crested glimmers on the air that drifted silently, unseen by everyone but her. Flick’s smile grew into a wide grin as she watched the golden sparkles swirl and ballet-dance around her bedroom. They rolled and dived through the air like glitter in water, tumbling in a swarm of magical particles.

Flick raised a hand, and the swarm of magic floated soundlessly over to her, draping across her hand, fitting around her fingers like a glove. Flick could feel nothing at all, even when she squeezed her fist around some of the particles.

Flick lowered the magnifying glass and pressed the round bit of it to her mouth. It was cold, and tasted a bit like a two-pence coin she’d once licked, just to see what it was like.

The magnifying glass had been made more than one hundred years ago and had once belonged to a member of her friend Jonathan Mercator’s family (the initials N.M. were scratched into the rim of brass). The magnifying glass wasn’t exactly magical by itself—it was merely a way to see the magic that was already there. Magic, Flick now knew, was everywhere in the whole world.

But that wasn’t all that Flick could see.

She got up off her bed and clicked the bedside lamp off before peeping through her curtains. With the light off, she could see past her own reflection, right into the garden and the housing development beyond.

The rows of houses looked dark and gloomy in the overcast night. It had been a hot and muggy day, the air full of moisture that refused to condense into rain. There was no moon to be seen, and the sky was the sort of deep purple that promised a thunderstorm later. Flick pressed a palm to the glass and wondered if that static feel in the air you got just before a storm really was just static, or something more magical. A prickle crept over her back at the thought. It was entirely possible that storms stirred up magic in the air. Anything was possible, really.

She stared out at the dark for a few minutes, watching the occasional light come on in a house she didn’t recognize. She waited until she couldn’t stand it any longer, before raising the tiny brass magnifying glass to her eye once again.

This time the effect was electric.

A bright scratch of light lit up the play area in the center of the housing development. It was jagged, like a lightning bolt drawn by someone whose hands were shaking. The line in the air glowed with yellow-white light, tiny particles of magic moving in and out of it. It was carved into the air about two meters above the top of the slide, just waiting.

A tear in the fabric of reality.

A gateway to another world.

A massive shiver ran over Flick’s body. She had spotted the schism the day before yesterday. Although it wasn’t hurting a soul, the schism reminded Flick of what could happen. And what she had done, only a few weeks ago, in another world.

Flick stared at it until her eye started to water, then lowered the magnifying glass and rested her head on the window. The cold glass felt nice against her warm skin, and as she listened to the creaking nighttime sounds of her home, gradually the frightened feeling gave way to a soft calm. She was safe here, and loved, and with the family she had come so close to losing. The memory of that near loss was now forever associated with schisms. Even looking at one through the magnifying glass made her feel sick with nerves.

Flick had only found out about schisms recently, when she had joined the secret society that was part of the Strangeworlds Travel Agency.

A place of travel, and magical objects, and the home of the only friend Flick had made since her family moved to Little Wyverns.

The Strangeworlds Travel Agency was also the reason she was grounded right now. Her parents were acting as though Flick had gone out and robbed a bank, when all she’d really done was disappear for a day and a night.

Flick pulled a face. She wished she didn’t understand why they were so mad. But she did. She hadn’t expected to be grounded for the whole of the summer vacation, though. There was only a week and a half left, and then she’d be off to her new school and would only have the weekends and holidays to visit the travel agency.

In the distance, a siren sounded and blue lights flashed. She jumped slightly at the sound, knocking a mostly empty piggy bank off the windowsill and onto the floor with a crash.

From her parents’ room, she heard a cough and the creak of their bedframe. She ought to be back in bed.

Flick left the piggy where it was, pulled the curtains closed again, and slipped back into bed. The magnifying glass was still clutched tightly in her hand. 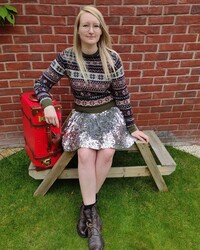 L. D. Lapinski lives just outside Sherwood Forest with her family, a lot of books, and a cat called Hector.

The Edge of the Ocean