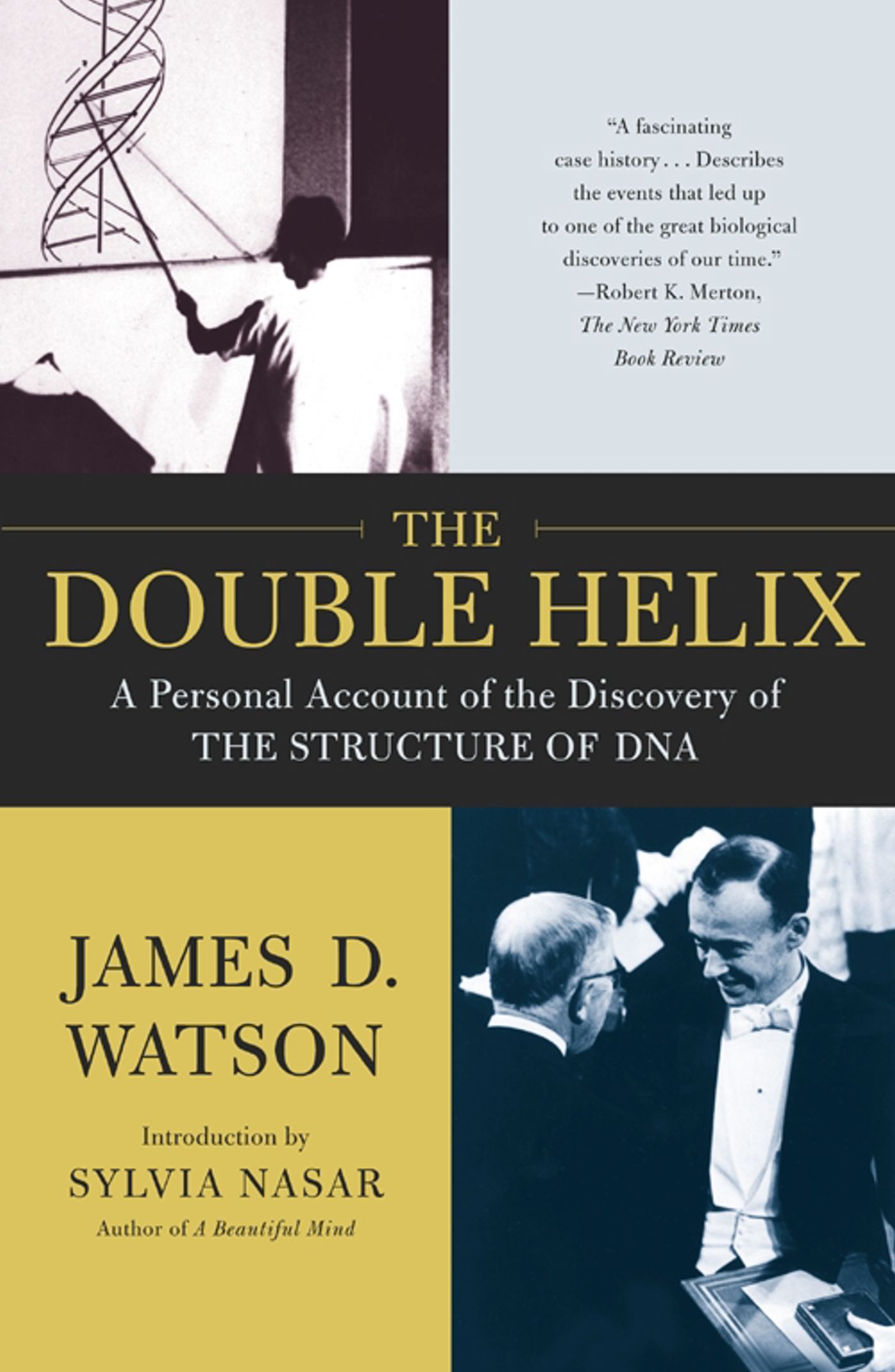 A Personal Account of the Discovery of the Structure of DNA

The classic personal account of Watson and Crick’s groundbreaking discovery of the structure of DNA, now with an introduction by Sylvia Nasar, author of A Beautiful Mind.

By identifying the structure of DNA, the molecule of life, Francis Crick and James Watson revolutionized biochemistry and won themselves a Nobel Prize. At the time, Watson was only twenty-four, a young scientist hungry to make his mark. His uncompromisingly honest account of the heady days of their thrilling sprint against other world-class researchers to solve one of science’s greatest mysteries gives a dazzlingly clear picture of a world of brilliant scientists with great gifts, very human ambitions, and bitter rivalries.

With humility unspoiled by false modesty, Watson relates his and Crick’s desperate efforts to beat Linus Pauling to the Holy Grail of life sciences, the identification of the basic building block of life. Never has a scientist been so truthful in capturing in words the flavor of his work.

I have never seen Francis Crick in a modest mood. Perhaps in other company he is that way, but I have never had reason so to judge him. It has nothing to do with his present fame. Already he is much talked about, usually with reverence, and someday he may be considered in the category of Rutherford or Bohr. But this was not true when, in the fall of 1951, I came to the Cavendish Laboratory of Cambridge University to join a small group of physicists and chemists working on the three-dimensional structures of proteins. At that time he was thirty-five, yet almost totally unknown. Although some of his closest colleagues realized the value of his quick, penetrating mind and frequently sought his advice, he was often not appreciated, and most people thought he talked too much.

Leading the unit to which Francis belonged was Max Perutz, an Austrian-born chemist who came to England in 1936. He had been collecting X-ray diffraction data from hemoglobin crystals for over ten years and was just beginning to get somewhere. Helping him was Sir Lawrence Bragg, the director of the Cavendish. For almost forty years Bragg, a Nobel Prize winner and one of the founders of crystallography, had been watching X-ray diffraction methods solve structures of ever-increasing difficulty. The more complex the molecule, the happier Bragg became when a new method allowed its elucidation. Thus in the immediate postwar years he was especially keen about the possibility of solving the structures of proteins, the most complicated of all molecules. Often, when administrative duties permitted, he visited Perutz' office to discuss recently accumulated X-ray data. Then he would return home to see if he could interpret them.

Somewhere between Bragg the theorist and Perutz the experimentalist was Francis, who occasionally did experiments but more often was immersed in the theories for solving protein structures. Often he came up with something novel, would become enormously excited, and immediately tell it to anyone who would listen. A day or so later he would often realize that his theory did not work and return to experiments, until boredom generated a new attack on theory.

There was much drama connected with these ideas. They did a great deal to liven up the atmosphere of the lab, where experiments usually lasted several months to years. This came partly from the volume of Crick's voice: he talked louder and faster than anyone else and, when he laughed, his location within the Cavendish was obvious. Almost everyone enjoyed these manic moments, especially when we had the time to listen attentively and to tell him bluntly when we lost the train of his argument. But there was one notable exception. Conversations with Crick frequently upset Sir Lawrence Bragg, and the sound of his voice was often sufficient to make Bragg move to a safer room. Only infrequently would he come to tea in the Cavendish, since it meant enduring Crick's booming over the tea room. Even then Bragg was not completely safe. On two occasions the corridor outside his office was flooded with water pouring out of a laboratory in which Crick was working. Francis, with his interest in theory, had neglected to fasten securely the rubber tubing around his suction pump.

At the time of my arrival, Francis' theories spread far beyond the confines of protein crystallography. Anything important would attract him, and he frequently visited other labs to see which new experiments had been done. Though he was generally polite and considerate of colleagues who did not realize the real meaning of their latest experiments, he would never hide this fact from them. Almost immediately he would suggest a rash of new experiments that should confirm his interpretation. Moreover, he could not refrain from subsequently telling all who would listen how his clever new idea might set science ahead.

As a result, there existed an unspoken yet real fear of Crick, especially among his contemporaries who had yet to establish their reputations. The quick manner in which he seized their facts and tried to reduce them to coherent patterns frequently made his friends' stomachs sink with the apprehension that, all too often in the near future, he would succeed, and expose to the world the fuzziness of minds hidden from direct view by the considerate, well-spoken manners of the Cambridge colleges.

Though he had dining rights for one meal a week at Caius College, he was not yet a fellow of any college. Partly this was his own choice. Clearly he did not want to be burdened by the unnecessary sight of undergraduate tutees. Also a factor was his laugh, against which many dons would most certainly rebel if subjected to its shattering bang more than once a week. I am sure this occasionally bothered Francis, even though he obviously knew that most High Table life is dominated by pedantic, middle-aged men incapable of either amusing or educating him in anything worthwhile. There always existed King's College, opulently nonconformist and clearly capable of absorbing him without any loss of his or its character. But despite much effort on the part of his friends, who knew he was a delightful dinner companion, they were never able to hide the fact that a stray remark over sherry might bring Francis smack into your life.

James D. Watson, together with Francis Crick and Maurice Wilkins, was awarded the Nobel Prize for Physiology or Medicine in 1962. He is Chancellor Emeritus of the Watson School of Biological Sciences at Cold Spring Harbor Laboratory.

Robert K. Merton The New York Times Book Review A fascinating case history...Describes the events that led up to one of the great biological discoveries of our time.

Jacob Bronowski The Nation No one could miss the excitement in this story of a great and beautiful discovery....The book communicates the spirit of science as no formal account has ever done....the sense of the future, the high spirits, and the rivalry and the guesses right and wrong, the surge of imagination and the test of fact.

Peter B. Medewar The New York Review of Books An enormous success...a classic.

Andre Lwoff Scientific American The history of a scientific endeavor, a true detective story that leaves the reader breathless from beginning to end.

Richard Feynman He has described admirably how it feels to have that frightening and beautiful experience of making a scientific discovery.

A Personal Account of the Discovery of the Structure of DNA