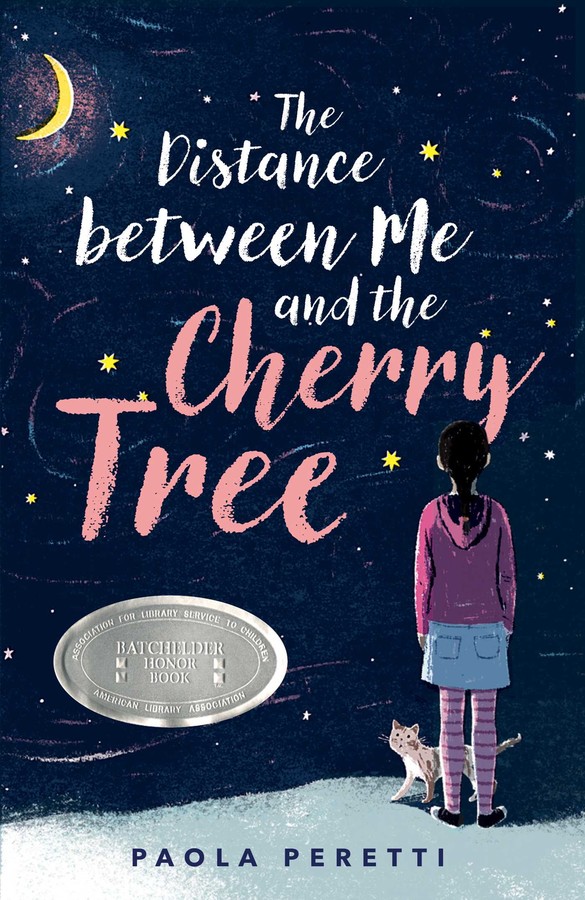 The Distance between Me and the Cherry Tree

Recipient of a Batchelder Honor

Ten-year-old Mafalda hides the fact that she is going blind from her family and friends in this lyrical, bittersweet debut novel from Italian author Paola Peretti that shows you how to overcome the darkness—even when you can’t see the light at the end of the tunnel.

There are a lot of things ten-year-old Mafalda cares a lot about. Like, counting the stars in the night sky, playing soccer, and climbing the cherry tree outside her school. Mafalda even goes so far as to keep a list of all these things, because soon she won’t be able to do them anymore—because she’s going blind.

Even with her bad eyesight Mafalda can see that people are already treating her differently—and that’s the last thing she wants. So, she hides the fact that her vision is deteriorating faster than anyone predicted, and she makes a plan: When the time is right, she’ll go live in the cherry tree, just like her favorite book character.

But as Mafalda loses her sight, surprising things come in to focus. With the help of her family and friends both old and new, Mafalda discovers the things that matter most.

The Distance between Me and the Cherry Tree 1

The Dark
All children are scared of the dark.

The dark is a room with no door and no windows, where monsters grab you and eat you without making a sound.

I’m not afraid of the dark, though.

But I have something else to worry about. I have my very own dark, the one in my eyes.

I’m not making it up. If I were, Mom wouldn’t buy me pastries shaped like peaches filled with cream and she wouldn’t let me eat them before dinner. If everything were okay, Dad wouldn’t hide in the bathroom when the landlady phones, because it’s always bad news when she calls.

“Don’t worry,” Mom says when she does the dishes after dinner. “Go and play in your room and don’t worry about a thing.”

I hesitate in the kitchen doorway, trying with the power of my mind to make her turn round, but it never works. So here I am in my room, cuddling Ottimo Turcaret, my brown-and-gray cat with a kink at the end of his tail. He doesn’t mind being lifted, rolled over on the carpet, or chased with the toilet brush. He’s a cat, Dad says, and cats are opportunists. I suppose that means they like attention. For me, it’s enough that he’s around when things are going wrong and I need something warm and cuddly to hug. Like now.

I know something’s wrong. I might only be in fifth grade, but I notice everything. My cousin’s girlfriend says I have a third eye. She’s Indian, and I like that she thinks I have an extra eye, although it would be better if the two eyes I already have actually worked.

Sometimes I feel like crying, like now. My glasses steam up when I’m about to cry. I take them off, so at least they can dry and the red mark on my nose will go away. I’ve worn glasses since I started elementary school. I got these yellow ones with sparkly bits in December last year, and I love them. I put them back on in front of the mirror. Without my glasses, everything’s a bit misty, like when I have a very hot shower with boiling hot water. My mist is called Stargardt mist, or so Mom and Dad told me. They must’ve heard about it at the hospital. It says on Dad’s phone that Mr. Stargardt was a German ophthalmologist who lived a hundred years ago; he worked out what’s going on with my eyes. He also discovered that people who have the same mist as me see black spots in front of things or people, and that these spots get bigger and bigger, until they’re huge, and people with the spots have to get closer to things to see them properly. The Internet says, “The disease affects one in ten thousand people.” Mom says that special people are chosen by God, but when I think about it, I don’t feel that lucky. 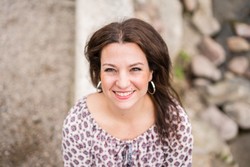 Paola Peretti lives in the province of Verona, Italy. She studied literature, philosophy, and graduated with a degree in publishing and journalism in 2011, and later attended the Palomar School of creative writing in Rovigo. Fifteen years ago, she was diagnosed with a rare genetic illness called Stargardt disease—the same as her main character—which causes progressive vision loss and eventual blindness. She is currently teaching Italian to immigrant children. The Distance between Me and the Cherry Tree is her debut novel.

"Peretti provides a tunnel of light for readers to reach for."

"A great opportunity to teach empathy and understanding."

The Distance between Me and the Cherry Tree