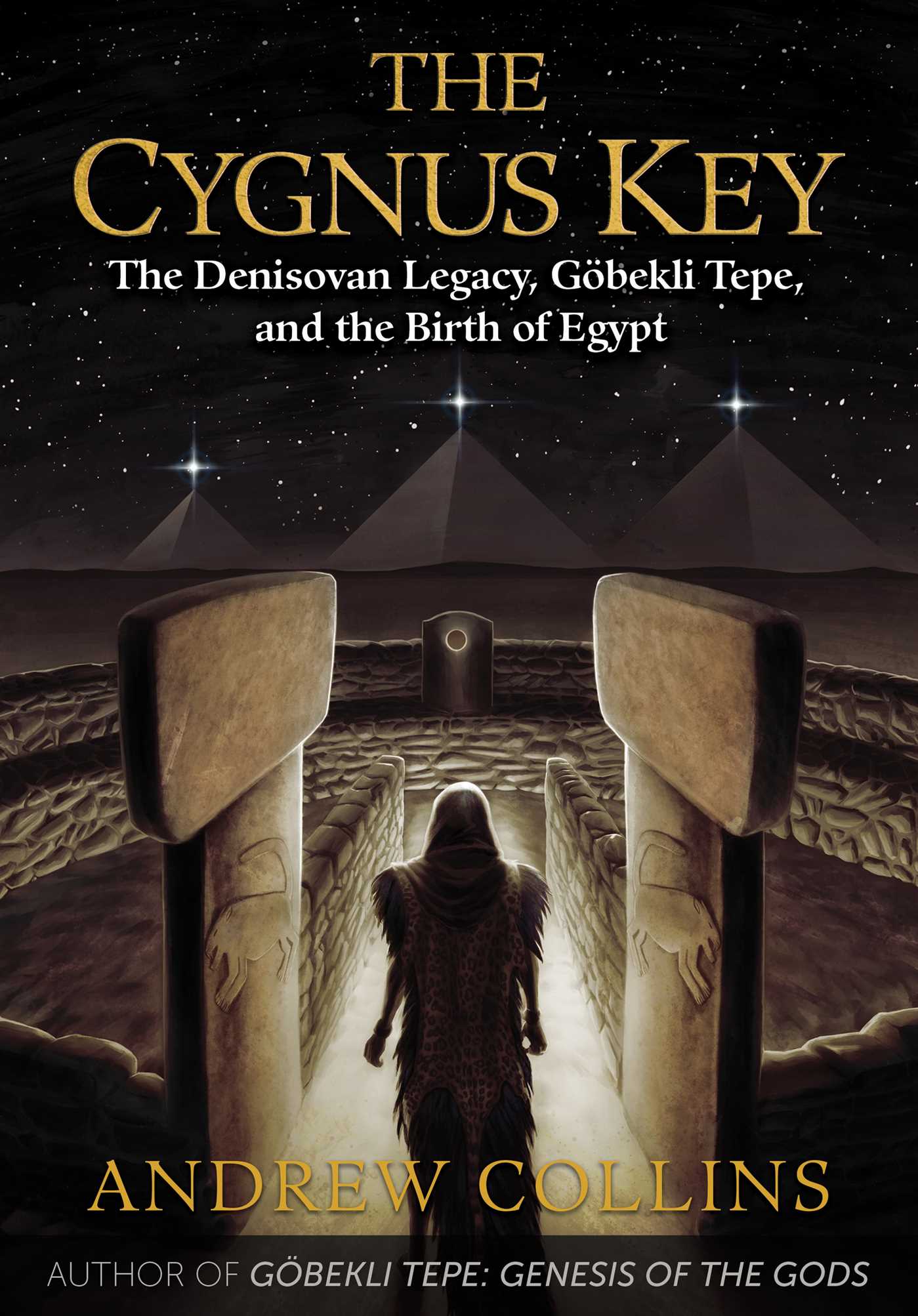 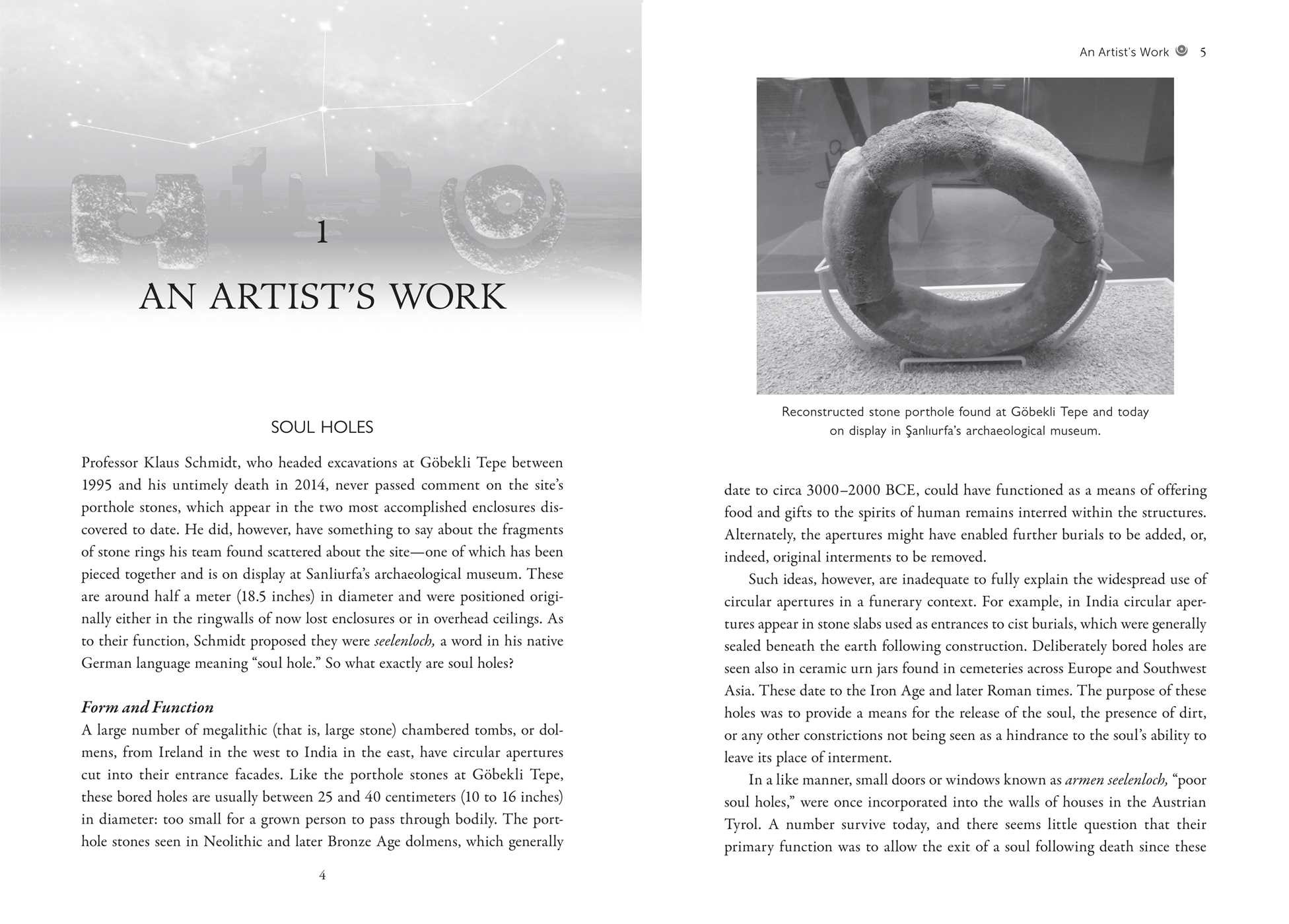 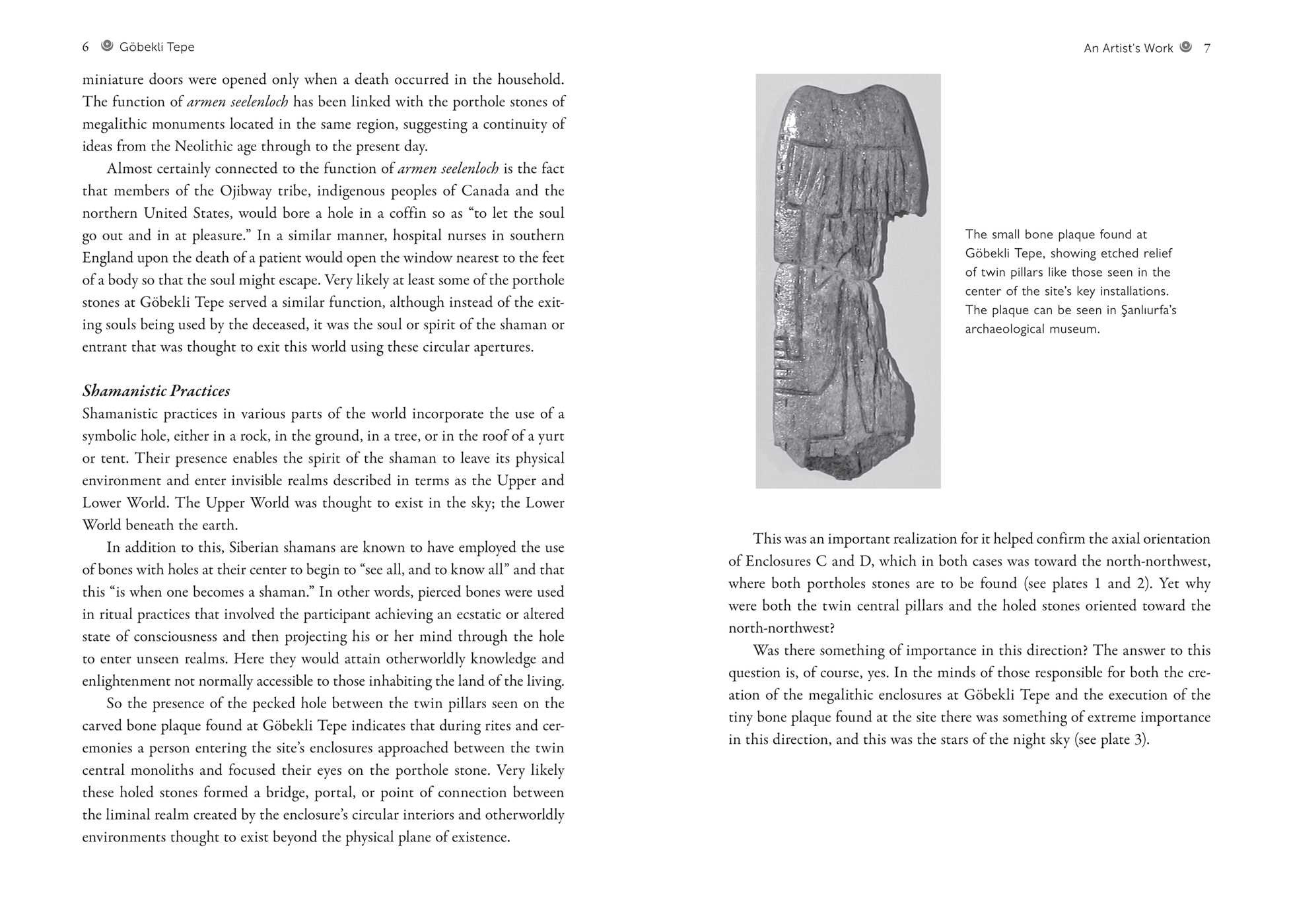 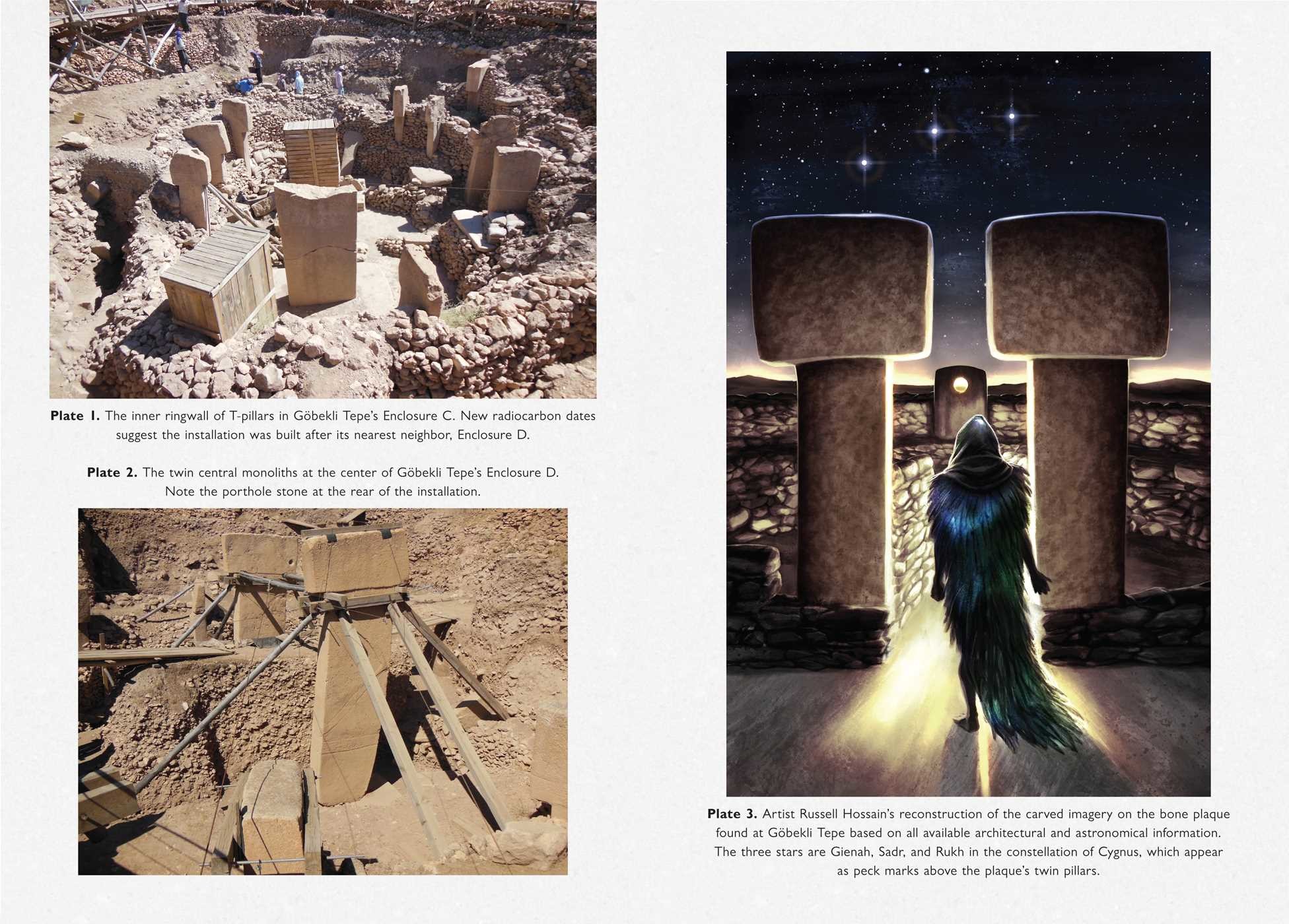 New evidence showing that the earliest origins of human culture, religion, and technology derive from the lost world of the Denisovans

• Traces the origins of Göbekli Tepe and the Giza pyramids to the Denisovans, a previously unknown human population remembered in myth as a race of giants

• Shows how the ancient belief in Cygnus as the origin point for the human soul is as much as 45,000 years old and originally came from southern Siberia

Built at the end of the last ice age around 9600 BCE, Göbekli Tepe in southeast Turkey was designed to align with the constellation of the celestial swan, Cygnus--a fact confirmed by the discovery at the site of a tiny bone plaque carved with the three key stars of Cygnus. Remarkably, the three main pyramids at Giza in Egypt, including the Great Pyramid, align with the same three stars. But where did this ancient veneration of Cygnus come from?

Showing that Cygnus was once seen as a portal to the sky-world, Andrew Collins reveals how, at both sites, the attention toward this star group is linked with sound acoustics and the use of musical intervals “discovered” thousands of years later by the Greek mathematician Pythagoras. Collins traces these ideas as well as early advances in human technology and cosmology back to the Altai-Baikal region of Russian Siberia, where the cult of the swan flourished as much as 20,000 years ago. He shows how these concepts, including a complex numeric system based on long-term eclipse cycles, are derived from an extinct human population known as the Denisovans. Not only were they of exceptional size--the ancient giants of myth--but archaeological discoveries show that this previously unrecognized human population achieved an advanced level of culture, including the use of high-speed drilling techniques and the creation of musical instruments.

The author explains how the stars of Cygnus coincided with the turning point of the heavens at the moment the Denisovan legacy was handed to the first human societies in southern Siberia 45,000 years ago, catalyzing beliefs in swan ancestry and an understanding of Cygnus as the source of cosmic creation. It also led to powerful ideas involving the Milky Way’s Dark Rift, viewed as the Path of Souls and the sky-road shamans travel to reach the sky-world. He explores how their sound technology and ancient cosmologies were carried into the West, flowering first at Göbekli Tepe and then later in Egypt’s Nile Valley. Collins shows how the ancient belief in Cygnus as the source of creation can also be found in many other cultures around the world, further confirming the role played by the Denisovan legacy in the genesis of human civilization.

Professor Klaus Schmidt, who headed excavations at Göbekli Tepe between 1995 and his untimely death in 2014, never passed comment on the site’s porthole stones, which appear in the two most accomplished enclosures discovered to date. He did, however, have something to say about the fragments of stone rings his team found scattered about the site--one of which has been pieced together and is on display at Sanliurfa’s archaeological museum. These are around half a meter (18.5 inches) in diameter and were positioned originally either in the ringwalls of now lost enclosures or in overhead ceilings. As to their function, Schmidt proposed they were seelenloch, a word in his native German language meaning “soul hole.” So what exactly are soul holes?

A large number of megalithic (that is, large stone) chambered tombs, or dolmens, from Ireland in the west to India in the east, have circular apertures cut into their entrance facades. Like the porthole stones at Göbekli Tepe, these bored holes are usually between 25 and 40 centimeters (10 to 16 inches) in diameter: too small for a grown person to pass through bodily. The porthole stones seen in Neolithic and later Bronze Age dolmens, which generally date to circa 3000–2000 BCE, could have functioned as a means of offering food and gifts to the spirits of human remains interred within the structures. Alternately, the apertures might have enabled further burials to be added, or, indeed, original interments to be removed.

Such ideas, however, are inadequate to fully explain the widespread use of circular apertures in a funerary context. For example, in India circular apertures appear in stone slabs used as entrances to cist burials, which were generally sealed beneath the earth following construction. Deliberately bored holes are seen also in ceramic urn jars found in cemeteries across Europe and Southwest Asia. These date to the Iron Age and later Roman times. The purpose of these holes was to provide a means for the release of the soul, the presence of dirt, or any other constrictions not being seen as a hindrance to the soul’s ability to leave its place of interment.

In a like manner, small doors or windows known as armen seelenloch, “poor soul holes,” were once incorporated into the walls of houses in the Austrian Tyrol. A number survive today, and there seems little question that their primary function was to allow the exit of a soul following death since these miniature doors were opened only when a death occurred in the household. The function of armen seelenloch has been linked with the porthole stones of megalithic monuments located in the same region, suggesting a continuity of ideas from the Neolithic age through to the present day.

Almost certainly connected to the function of armen seelenloch is the fact that members of the Ojibway tribe, indigenous peoples of Canada and the northern United States, would bore a hole in a coffin so as “to let the soul go out and in at pleasure.” In a similar manner, hospital nurses in southern England upon the death of a patient would open the window nearest to the feet of a body so that the soul might escape. Very likely at least some of the porthole stones at Göbekli Tepe served a similar function, although instead of the exiting souls being used by the deceased, it was the soul or spirit of the shaman or entrant that was thought to exit this world using these circular apertures.

Shamanistic practices in various parts of the world incorporate the use of a symbolic hole, either in a rock, in the ground, in a tree, or in the roof of a yurt or tent. Their presence enables the spirit of the shaman to leave its physical environment and enter invisible realms described in terms as the Upper and Lower World. The Upper World was thought to exist in the sky; the Lower World beneath the earth.

In addition to this, Siberian shamans are known to have employed the use of bones with holes at their center to begin to “see all, and to know all” and that this “is when one becomes a shaman.” In other words, pierced bones were used in ritual practices that involved the participant achieving an ecstatic or altered state of consciousness and then projecting his or her mind through the hole to enter unseen realms. Here they would attain otherworldly knowledge and enlightenment not normally accessible to those inhabiting the land of the living.

So the presence of the pecked hole between the twin pillars seen on the carved bone plaque found at Göbekli Tepe indicates that during rites and ceremonies a person entering the site’s enclosures approached between the twin central monoliths and focused their eyes on the porthole stone. Very likely these holed stones formed a bridge, portal, or point of connection between the liminal realm created by the enclosure’s circular interiors and otherworldly environments thought to exist beyond the physical plane of existence.

“The Cygnus Key is the new astronomical paradigm that shines light on the primal awakening of human consciousness, sparked by the discovery of precession cycles, sound acoustics, and number cosmology. Andrew Collins had already decoded the alignments to the Cygnus star system at Göbekli Tepe and the Giza pyramid complex in his book Göbekli Tepe: Genesis of the Gods. Now, going back even further to 45,000 years ago, he explores how our ancestors first discovered the Cygnus connection, the pathway of souls through the constellation of the swan. This brilliant book is the sign I’ve been waiting for! We are recovering from our species trauma from the great cataclysms 12,000 years ago. The Cygnus Key is a must-read for all students of ancient timelines, star alignments, and cosmology.”

“The Cygnus Key is a monumental work bringing numerous ancient mysteries into focus. It provides a lucid and well-reasoned understanding for readers who make the effort to digest it all. Starting with the amazing site of Göbekli Tepe, Collins leads the reader to Egypt and various other ancient civilizations. He shows how both Orion and Cygnus were key astronomical elements in the ancient world’s understanding of the soul’s journey to the stars and the probable source of these beliefs.”

“A dynamic quest to discover the cosmology of our earliest ancestors and its relevance today. Collins takes us on a convincing journey following the lore of the constellation of Cygnus. From Göbekli Tepe to the pyramids of Egypt and the archaic myths of Greece, we are led to humanity’s ultimate psycho-spiritual roots in the Paleolithic world of Russian Siberia and the realm of the Denisovans. A triumph.”

– Caroline Wise, editor of Finding Elen: The Quest for Elen of the Ways