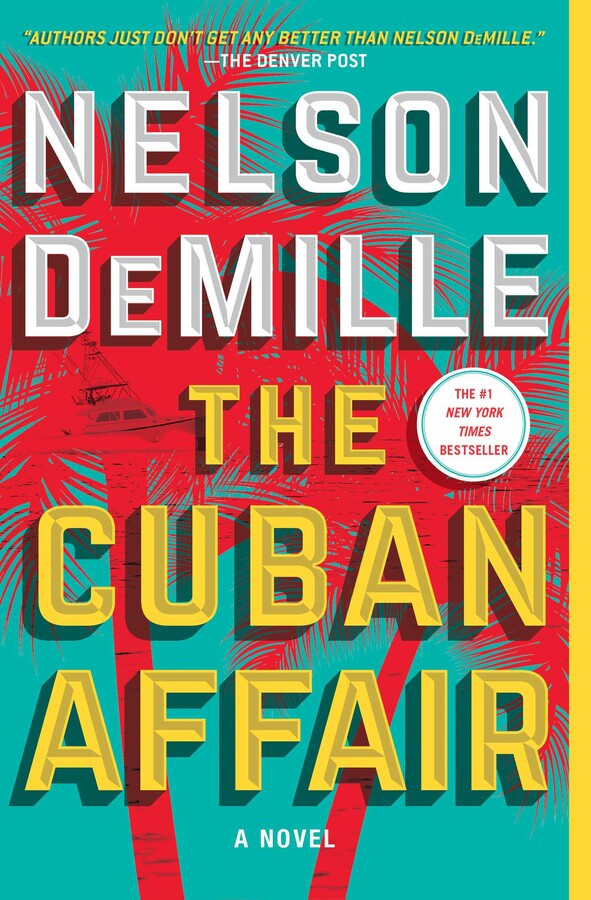 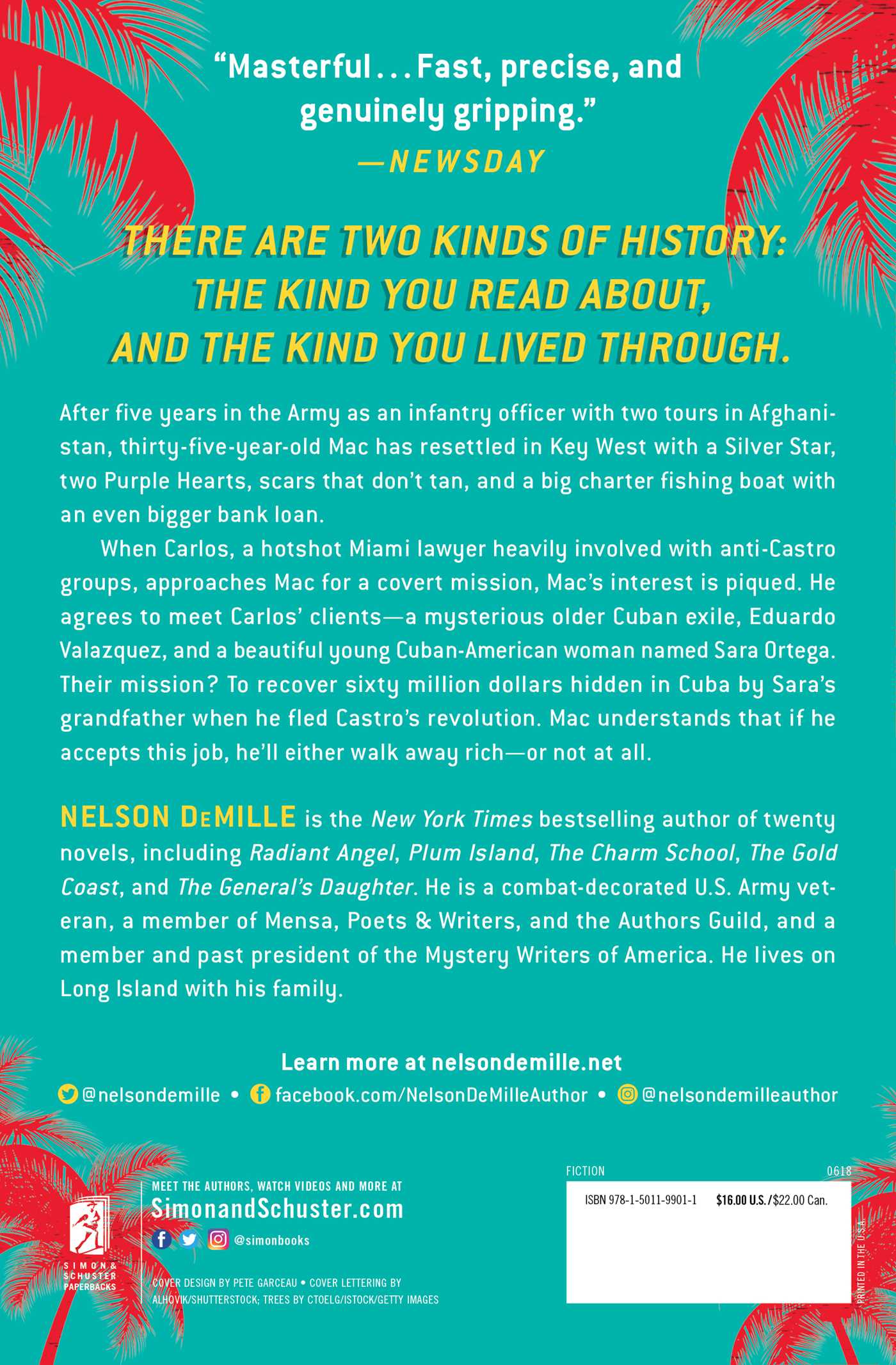 By Nelson DeMille
LIST PRICE $17.00
PRICE MAY VARY BY RETAILER

Daniel Graham MacCormick—Mac for short—seems to have a pretty good life. At age thirty-five he’s living in Key West, owner of a forty-two-foot charter fishing boat, The Maine. Mac served five years in the Army as an infantry officer with two tours in Afghanistan. He returned with the Silver Star, two Purple Hearts, scars that don’t tan, and a boat with a big bank loan. Truth be told, Mac’s finances are more than a little shaky.

One day, Mac is sitting in the famous Green Parrot Bar in Key West, contemplating his life, and waiting for Carlos, a hotshot Miami lawyer heavily involved with anti-Castro groups. Carlos wants to hire Mac for a ten-day fishing tournament to Cuba at the standard rate, but Mac suspects there is more to this and turns it down. The price then goes up to two million dollars, and Mac agrees to hear the deal, and meet Carlos’ clients—a beautiful Cuban-American woman named Sara Ortega, and a mysterious older Cuban exile, Eduardo Valazquez.

Mac learns that there is sixty million American dollars hidden in Cuba by Sara’s grandfather when he fled Castro’s revolution. With the “Cuban Thaw” underway between Havana and Washington, Carlos, Eduardo, and Sara know it’s only a matter of time before someone finds the stash—by accident or on purpose. And Mac knows if he accepts this job, he’ll walk away rich…or not at all.

The Cuban Affair CHAPTER 1
I was standing at the bar in the Green Parrot, waiting for a guy named Carlos from Miami who’d called my cell a few days ago and said he might have a job for me.

Carlos did not give me his last name, but he had ID’d himself as a Cuban American. I don’t know why I needed to know that, but I told him I was Scots-Irish-English American, in case he was wondering.

My name is Daniel Graham MacCormick—Mac for short—age thirty-five, and I’ve been described as tall, tan, and ruggedly handsome. This comes from the gay clientele in the Parrot, but I’ll take it. I live here on the island of Key West, and I am the owner and skipper of a 42-foot deep-sea fishing charter boat called The Maine, named for my home state—not for the American battleship that blew up in Havana Harbor, though some people think that.

I usually book my charters by phone, and most of my customers are repeats or referrals, or they checked out my website. The party just shows up fifteen minutes before sailing, and off we go for marlin, sailfish, tuna, sharks, or whatever. Or maybe the customer wants a sightseeing cruise. Now and then I get a fishing tournament or a romantic sunset cruise. Whatever the customer wants. As long as it’s legal.

But this guy, Carlos, wanted to meet first, coming all the way down from Miami, and he sounded a bit cryptic, making me think we weren’t talking about fishing.

The barmaid, Amber, inquired, “Ready for another?”

Amber popped another Corona and stuck a lime wedge in the neck. “Lime’s on me.”

Amber is pretty but getting a little hard behind the bar. Like nearly everyone here in what we call the Conch Republic, she’s from someplace else, and she has a story.

I, too, am from someplace else—Maine, as I said, specifically Portland, which is directly connected to Key West by U.S. Highway One, or by a cruise up the coast, but Portland is as far from here as Pluto is from the sun. FYI, I spent five years in the U.S. Army as an infantry officer and got blown up in Afghanistan. That’s the short story of how I wound up here. The long story is a long story, and no one in Key West wants to hear long stories.

It was about 5 P.M., give or take an hour. The citizens of the Conch Republic are not into clocks, which is why they’re here. We’re on sun time. Also, we have officially seceded from the United States, so we are all expats. I actually have a rainbow-hued Conch Republic passport, issued by the self-appointed Secretary General of the Republic, a guy named Larry who has a small office over on Angela Street. The passport was a gag gift from my first mate, Jack Colby, who like me is an Army vet. Jack got screwed up in ’Nam, and he’s still screwed up but in an old-guy sort of way, so my customers think he’s just grumpy, not crazy. His favorite T-shirt says: “Guns Don’t Kill People. I Kill People.” Maybe he is crazy.

I wasn’t sure of the time, but I was sure of the month—October. End of hurricane season, so business was picking up.

Amber, who was wearing a tank top, was sipping a black coffee, surveying the crowd. The Green Parrot’s regular clientele are eclectic and eccentric and mostly barefoot. The owner, Pat, is a bit crazy himself, and he tells the tourists that the parachute hanging on the ceiling is weighed down with termite turds.

“You were going to take me for a sail in September.”

“I did a lot of maintenance on the boat.”

“I thought you were going to sail to Maine.”

A customer called for another and Amber moved off.

I’ve never actually slept with Amber, but we did go skinny-dipping once off Fort Zachary Taylor. She has a butterfly tattoo on her butt.

The place was starting to fill up and I exchanged greetings with a few people. Freaks, geeks, loveable weirdos, and a few Hemingway look-alikes. He used to live here, and you can see his house for ten bucks. You can see mine for free. Bring a six-pack. Anyway, Key West’s official motto is “One Human Family.” Well, they haven’t met my family. And they haven’t been to Afghanistan to see the rest of the human family. Or, like Jack, to Vietnam. Or if they have, they’re here, like me and Jack, to float in a sea of alcohol-induced amnesia. I’ve been here four years. Five is enough to forget why you came here. After that, you’re not going home.

But, hey, it could be worse. This is paradise. Better than two tours in Allfuckedupistan. Better than freezing my ass off in Maine. And definitely better than 23 Wall Street, where I worked for a year after graduating from Bowdoin College. If I’d stayed with Hamlin Equities I’d now be dead from boredom.

Instead, I was captain of The Maine, and a former captain of infantry with a fifty percent combat disability and a quarter-million-dollar bank loan on my boat. The fifty percent disability is for pay purposes and I have no physical limitations except for housecleaning. The bank loan is a hundred percent pain in the ass.

But when I’m out there on the sea, especially at night, I am free. I am captain of my own fate.

Which was why I agreed to meet Carlos the Cuban, who was not interested in fishing. That much I understood from our short phone conversation. And I wouldn’t be the first sea captain who got involved with these people.

Well, I’d listen and see if I could make an intelligent decision—like I did when I left Wall Street and joined the Army for adventure. How’d that work out, Mac?

Being captain of your own fate doesn’t mean you always make good decisions. 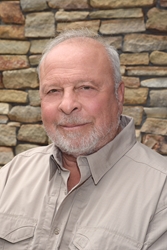 Nelson DeMille is the New York Times bestselling author of twenty-one novels, six of which were #1 New York Times bestsellers. His novels include The Deserter (written with Alex DeMille), The Cuban Affair, Word of Honor, Plum Island, The Charm School, The Gold Coast, and The General’s Daughter, which was made into a major motion picture, starring John Travolta and Madeleine Stowe. He has written short stories, book reviews, and articles for magazines and newspapers. Nelson DeMille is a combat-decorated US Army veteran, a member of Mensa, Poets & Writers, and the Authors Guild, and past president of the Mystery Writers of America. He is also a member of the International Thriller Writers, who honored him as 2015 ThrillerMaster of the Year. He lives on Long Island with his family.

By Nelson DeMille
LIST PRICE $17.00
PRICE MAY VARY BY RETAILER