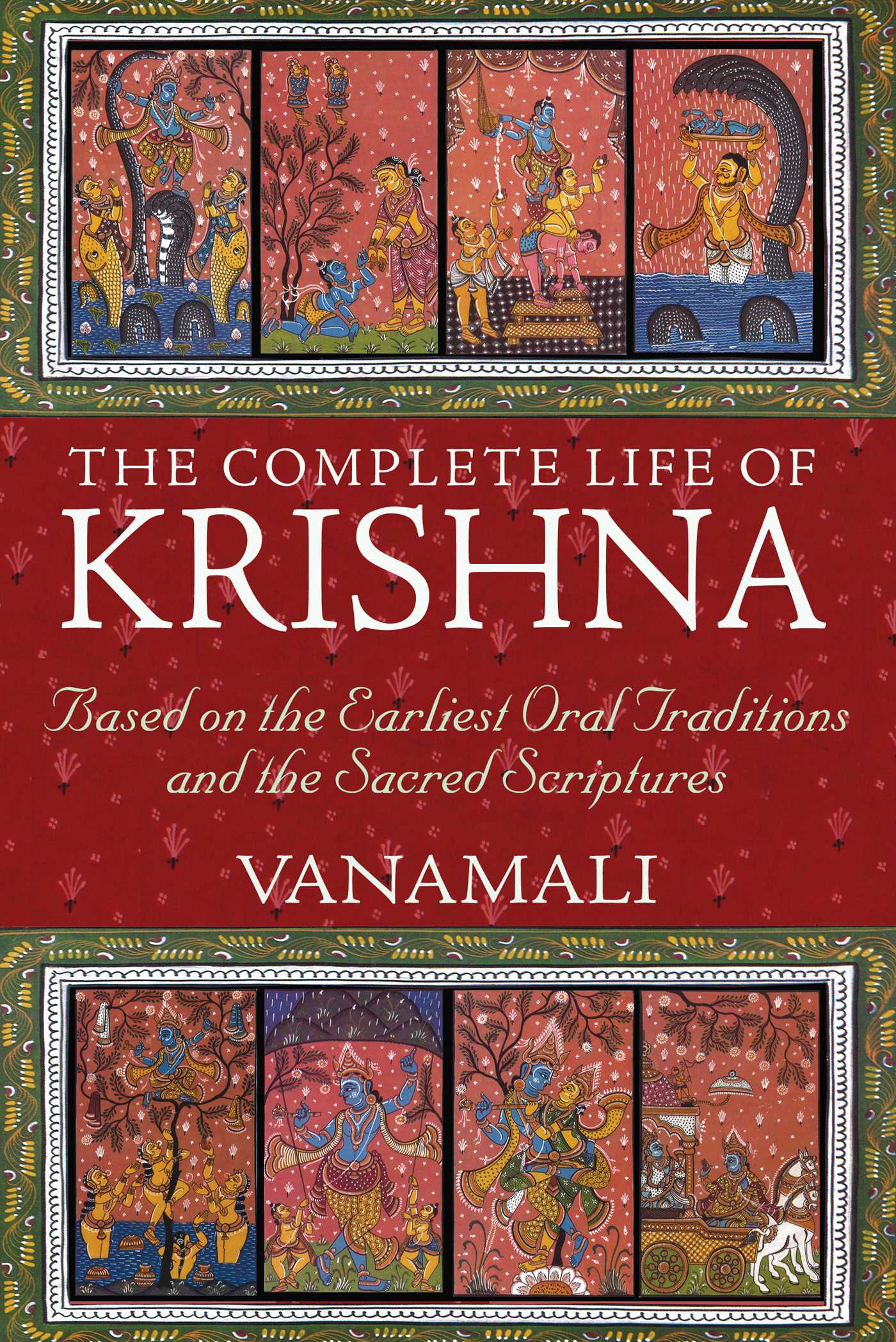 The Complete Life of Krishna

Based on the Earliest Oral Traditions and the Sacred Scriptures

The first book to cover Krishna’s entire life, from his childhood pranks to his final powerful acts in the Mahabharata war

• Shows how the stories of Krishna’s life are expressed with such simplicity and humor that they enable anyone--man, woman, or child--to see the wisdom of his teachings

Krishna, one of the most beloved characters of the Hindu pantheon, has been portrayed in many lights: a god-child, a prankster, a model lover, a divine hero, an exemplary ruler, and the Supreme Being. In The Complete Life of Krishna, Vanamali, a leading Krishna expert from a long line of prominent Krishna devotees, provides the first book in English or Sanskrit to cover the complete range of the avatar’s life.

Drawing from the Bhagavad Purana, the Bhagavad Gita, the Mahabharata, and India’s sacred oral tradition, Vanamali shares stories from Krishna’s birth in a dungeon and early days as a merry trickster in Vrindavana, through his time as divine ruler at Dwaraka, to his final powerful acts as the hero Arjuna’s charioteer and guru in the Kurukshetra war. She explains how Krishna became a mahayogi, the greatest of all yogis, and attained complete mastery over himself and nature. By integrating the hero-child with the mahayogi, the playful lover with the divine ruler, Vanamali shows how the stories of Krishna’s life are expressed with such simplicity and humor that they enable anyone--man, woman, or child--to see the wisdom of his teachings.

This complete biography of the man who was also a god provides a valuable meditative tool allowing Krishna’s lessons to illuminate from within.

At the end of your life, your knowledge of grammar is not going to save you, O foolish man! Therefore, adore the Supreme Lord, Govinda (Krishna), for in that alone lies your salvation.
--Adi Sankaracharya

Every year at the end of the summer, the cowherds of Vrindavana would offer a great sacrifice to Indra, the king of the gods and the god of rain. Krishna questioned His father about the preparations.

“Every year we make a sacrifice to Indra to show our gratitude,” said Nanda.

“What has he done for us for which we should be grateful?” queried Krishna.

“Hush, child, do not speak like that. You have no respect for the gods. Don’t you know that it’s Indra who gives us rains? We are cowherds. Our wealth is derived from our cattle. How will our cows thrive without grass and how will grass grow if there is no rain? If Indra is not propitiated, he will not give us rain or he will give too much of it, and where will we be? Without rain, all human efforts are of no use.”

Hearing this, Krishna replied, “Being a forest tribe, we live in the woods and on hills like the Govardhana. The hill stops the rain clouds and rain falls in Vrindavana, and it’s on the grassy slopes of this hill that our cattle graze and grow sleek and fat and yield plenty of milk. What has Indra got to do with this? Let a variety of eatables be made and let food and gifts be given to all, including the outcasts. Worship the cows with grass and the hill with sacrificial offerings. This is my view, O Father! This will make everyone happy--the cows, the holy men, and Myself. If it is acceptable to you, you may follow it.”

Nanda had been brought up in the tradition of paying respects to all the ancient gods, such as Indra, but he had great faith in the words of his son, who possessed extraordinary powers, so he carried out all Krishna’s instructions. On the appointed day, under Lord Krishna’s supervision, plenty of butter, milk, and sweets, all His favorite dishes, in fact, were prepared in vast quantities.

“Do not stint on anything, Father,” Krishna said teasingly. “When you make an offering to God, it should be the very best that you can afford.” Through the prank He was playing, Krishna was also teaching the villagers a valuable lesson--to give honor where honor is due and also to give lavishly when giving.

Carrying loads of food, the entire community trudged up the hillside, lit the sacrificial fire, and worshipped the holy men, the cows, and the mountain itself. To generate faith in their minds, Krishna appeared in a gigantic form as the spirit of the mountain and consumed large quantities of the food offerings! No wonder He had asked them to prepare the things He liked best. Then, in His own form as a gopala, He turned to others, asking them, “In all the years that you have been giving offerings to Indra, has he ever come personally to accept them?” They shook their heads sadly.

“Now see,” said Krishna playfully, “how Govardhana has accepted your offerings in person!”

But Indra was not to be dismissed so easily. He had listened to Krishna’s audacious words to His father and was determined to teach Him a lesson. Thus, he assembled all his weightiest rain clouds and hurled them down with such force that it rained in Vrindavana as it had never rained before. Drops as large as buckets came pelting down, hour after hour, day after day, without a moment of intermission. The river began to overflow and the trees to be washed away. When they found that the onslaught refused to abate despite their tardy prayers to an irate Indra, the terrified cowherds ran to Krishna for help. He spoke reassuringly to them. “Fear not, I will protect those who trust in Me and have no recourse but Me.”

Telling them to bring their cattle and all their worldly possessions with them, He took them to the Govardhana Hill, and then, with the greatest of ease, He uprooted the mighty mountain with His tender, boyish hand and held it aloft with one finger as easily as a child would sport with a mushroom! Snugly ensconced beneath this mighty hill, the cowherds stayed safely for seven days and seven nights, while the rains lashed down in all fury. Thunder crashed and lightning flashed, the winds howled and the waters poured down in an unending deluge, for Indra was determined to make them come out of their improvised shelter and beg for mercy. Not even a giant could hold out for so long, thought he, and certainly not a small child like Krishna. Very soon he will get tired and put down the hill, or it may even come down on him and crush the whole tribe to pulp! But nothing of the sort seemed to be happening.

The gopas were having a wonderful time in their improvised shelter. They built a fire to keep themselves warm and held wrestling bouts and bullfights while the gopis danced and sang and gazed adoringly at Lord Krishna as He stood there holding the hill aloft with one hand.

At last Indra’s stock of water seemed to have been exhausted. Seeing the sky clear of clouds, Krishna led His entourage out into the open. In the presence of all, Lord Krishna reinstalled the mountain in its original place. The inhabitants of Vraja threw themselves at His feet and hailed Him to the skies. Indra looked down from His heaven and knew to his fury that a new star had appeared on the firmament--one that would eclipse him in the years to come.

“Scholarly and insightful on the meanings of these legends, The Complete Life of Krishna is a strongly recommended pick for religious history collections focusing on Hinduism and eastern religions.”

“Drawing from the Bhagavad Gita and other sacred texts, the author explains how Krishna became a mahayogi, the greatest of all yogis, with complete mastery over himself and nature. On whatever level you receive these stories, they are a valuable meditative tool, full of delight and wisdom.”

“Vanamali’s new book will entrance readers as a first introduction to the immortal Lord of Love, or as a cherished opportunity to once again dip into the nectar of the Lord’s lila, his play on earth.”

“Recommended for new age and spirituality collections alike, this draws from a range of sources, from India’s oral tradition to the Bhagavata Purana, Gita, Mahabharata and more, exploring Krishna’s life, how he became the greatest of all yogis, and how he evolved to the position of a divine ruler. Any collection strong in Indian spirituality needs this in-depth coverage.”

The Complete Life of Krishna

Based on the Earliest Oral Traditions and the Sacred Scriptures