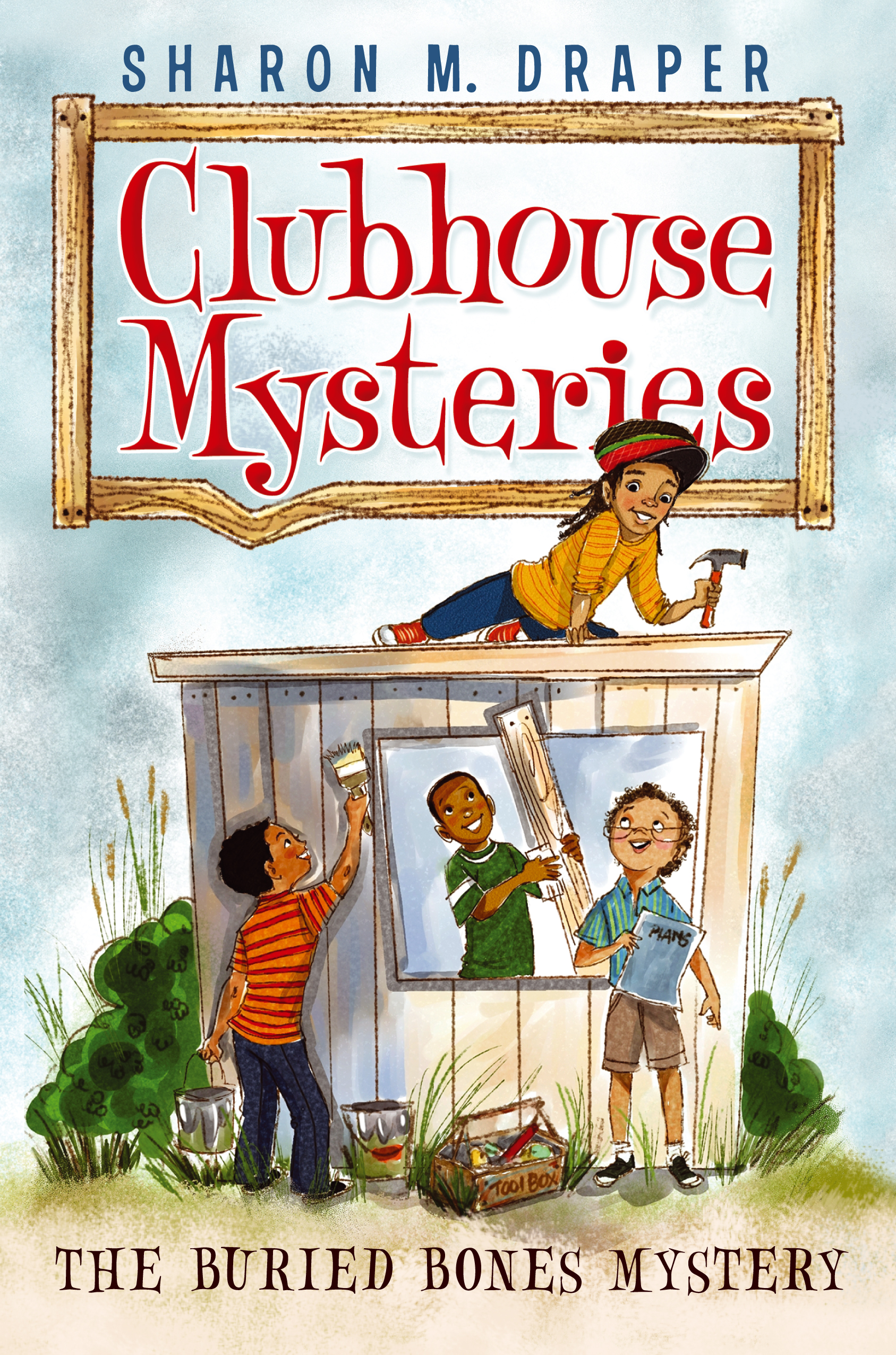 In this reissue of a classic chapter book series by award-winning author Sharon M. Draper, four boys who call themselves the Black Dinosaurs, find themselves involved in exciting mysteries around their town.

Ziggy and his friends Rico, Rashawn, and Jerome call themselves The Black Dinosaurs, and share exciting adventures. In The Buried Bones Mystery, the boys build a clubhouse in Ziggy’s backyard, where they uncover a box of bones while digging to bury their secret treasures. But when the boys try to hide their treasures, they’re swept up in a mystery more intriguing—and scary—than anything they could have imagined. Who could have buried a box of bones behind their clubhouse?


SCHOOL WAS OVER AND THE SUMMER MORNING stretched ahead like a soft, sweet piece of bubble gum. It was still early for a boy who had just finished fifth grade and promised himself he would sleep until noon every day of summer vacation. But the day was warm, and no matter how he tried to ignore it, the sunshine had called him early to get up. Rico Johnson grabbed his basketball and headed down the street to Ziggy’s house.

Rico liked to go to Ziggy’s house because it was so different from his own. Rico lived with his mom, who drove a dull brown car and worked in an office building downtown, where she wore sensible, flat shoes and wrote careful letters to people in other offices. She went bowling with her friends every Friday night and took Rico to piano lessons every Saturday afternoon. She was the kind of mom who didn’t think dinner was complete unless a green vegetable was served. Basically boring, thought Rico.

But Ziggy’s house—now that was another story. It was huge, brightly painted, and cheerful. Ziggy’s mom sometimes planted flowers and sometimes vegetables in the front yard, so there was an odd assortment of tomato plants, roses, corn, and lilies growing together. The grass was cut whenever someone thought about it. One summer it had even been kept short by Ziggy’s uncle Raphael’s pet goat. Trimmed or not, it always looked soft and inviting, and was the perfect place to stop and rest on a hot day.

Ziggy’s doorbell didn’t work, so Rico knocked on the screen door. Raphael came to the door looking sleepy and confused. His hair, long and braided, hung down over his eyes.

“So, little mon, you come see Ziggy?” Rico grinned and nodded. “Him still sleep—go get his lazy bones up, mon.”

Raphael let Rico in and headed back to bed to finish his morning nap. Three more uncles and a cousin were staying with Ziggy’s family, but the house still felt large and roomy. Ziggy’s mom came from a family of fourteen in Jamaica, so she kept her door open to any relative who needed a place to stay.

Rico had spent the night at Ziggy’s many times, so he knew exactly where he was headed. He ran up the stairs, turned left, and opened the bathroom door. There, in the bathtub, wrapped in an army sleeping bag, lay Ziggy. He was wide awake.

“Not you, man. Why you still sleepin’ in the tub? You got a perfectly good bed right across the hall.”

“Ah, Rico-mon, a soft bed is for sissies! I’m practicing for when I become a spy for the FB of I. Spies gotta be tough, you know. Besides, when I gotta get up and go to the bathroom at night, I’m already there!”

Rico laughed and helped Ziggy out of the tub. Ziggy got dressed, brushed his teeth, grabbed his basketball, put on a large black, yellow, and green hat his mother had knitted, and tucked his braids inside. Then he and Rico headed downstairs. Ziggy’s mom, who was already in the kitchen cutting onions for dinner, smiled at them and said, “It be a fine morning for young doodles like you two. Make sure you eat something before you leave.”

Ziggy grabbed two onions, took a big bite of one, and said with his mouth full, “We’ll be playin’ basketball, Mum. Be back soon.”

Rico, who usually had cereal and juice and toast in the morning, just like the picture on the front of the cereal box, was always surprised at what Ziggy ate for breakfast. Yesterday Ziggy had eaten a cold ear of corn covered with peanut butter. “Don’t be afraid to try new ideas,” Ziggy had said. “When we’re spies for the FB of I, we may have to eat bugs!” Rico hoped not, but he didn’t tell Ziggy.