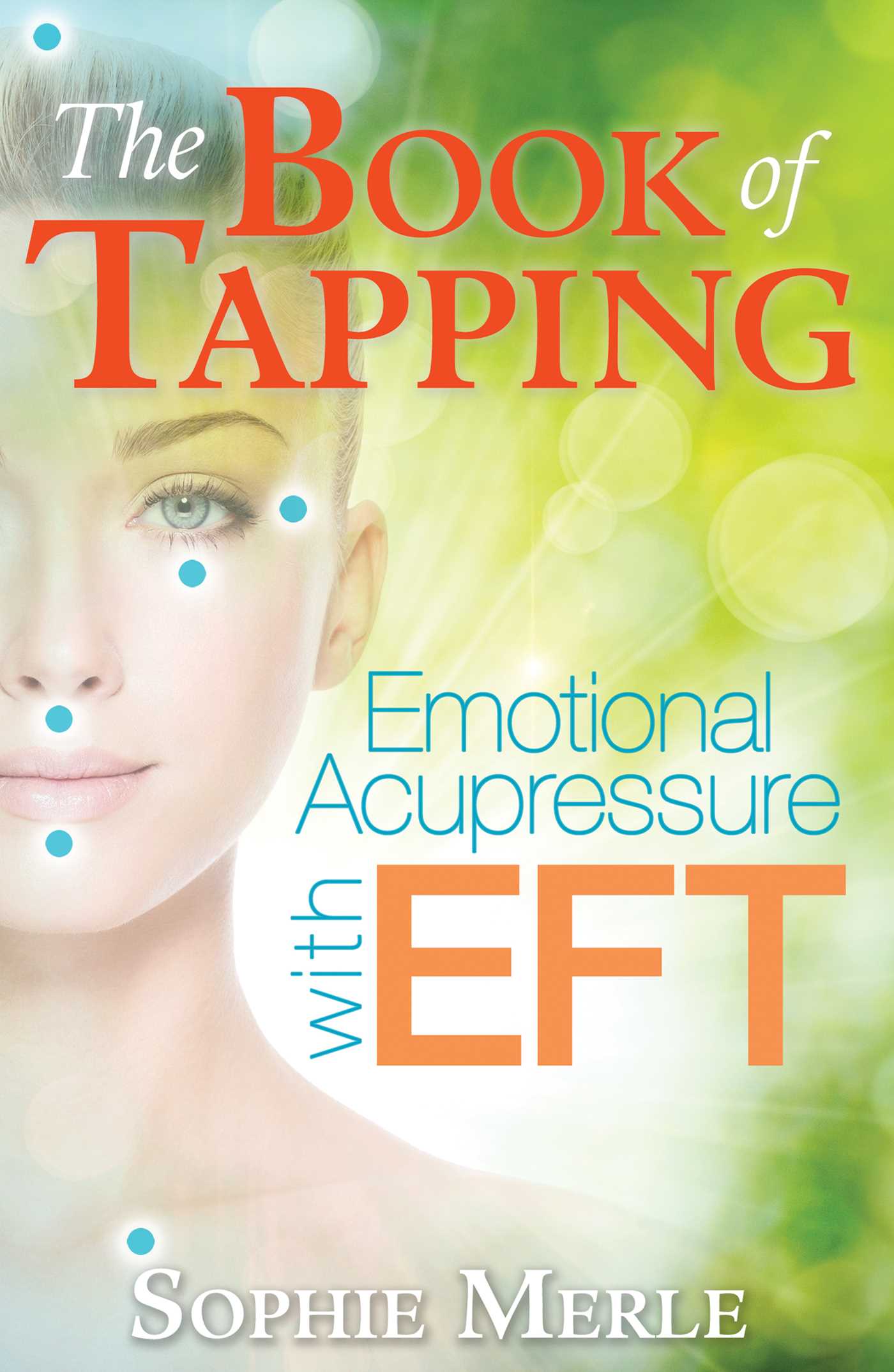 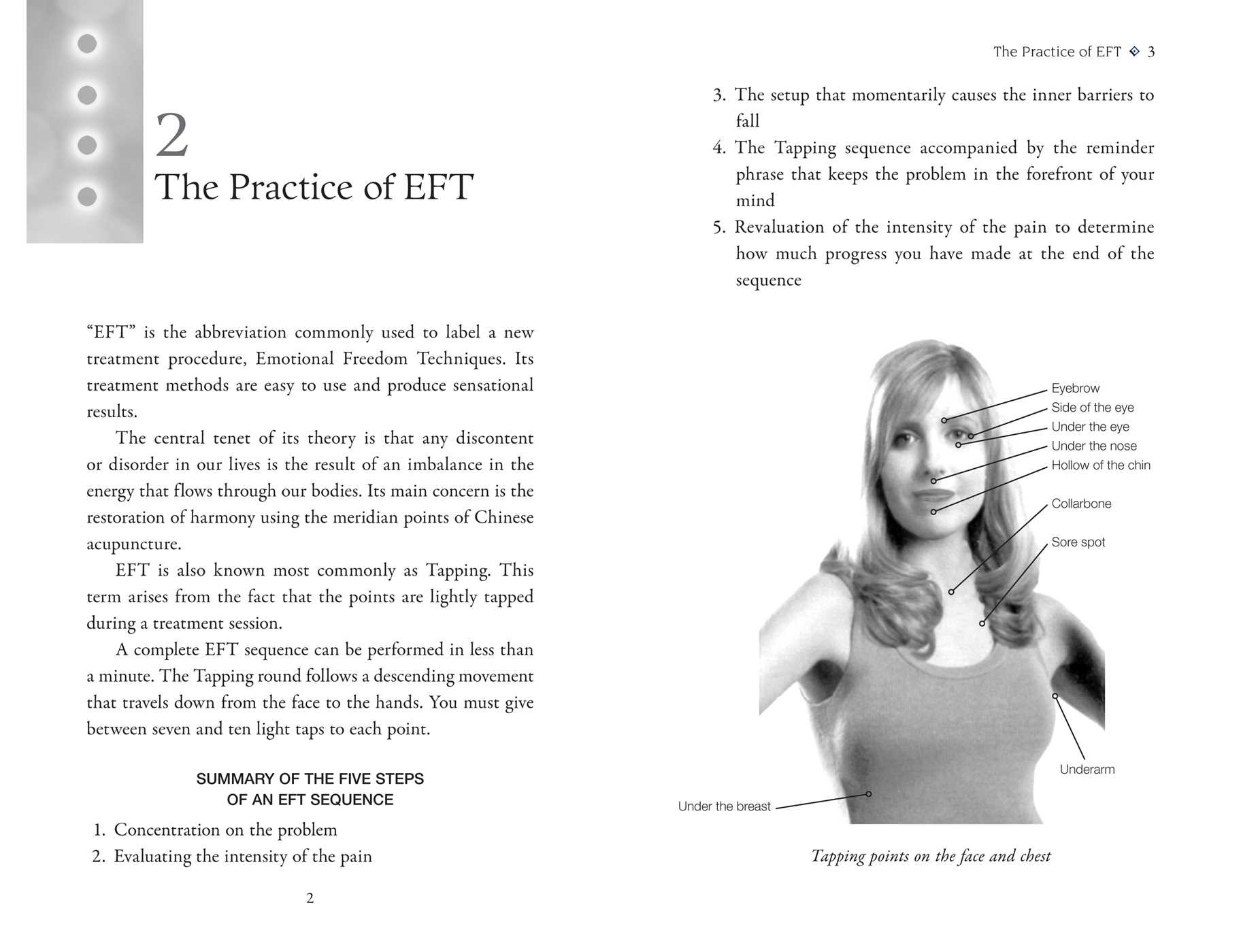 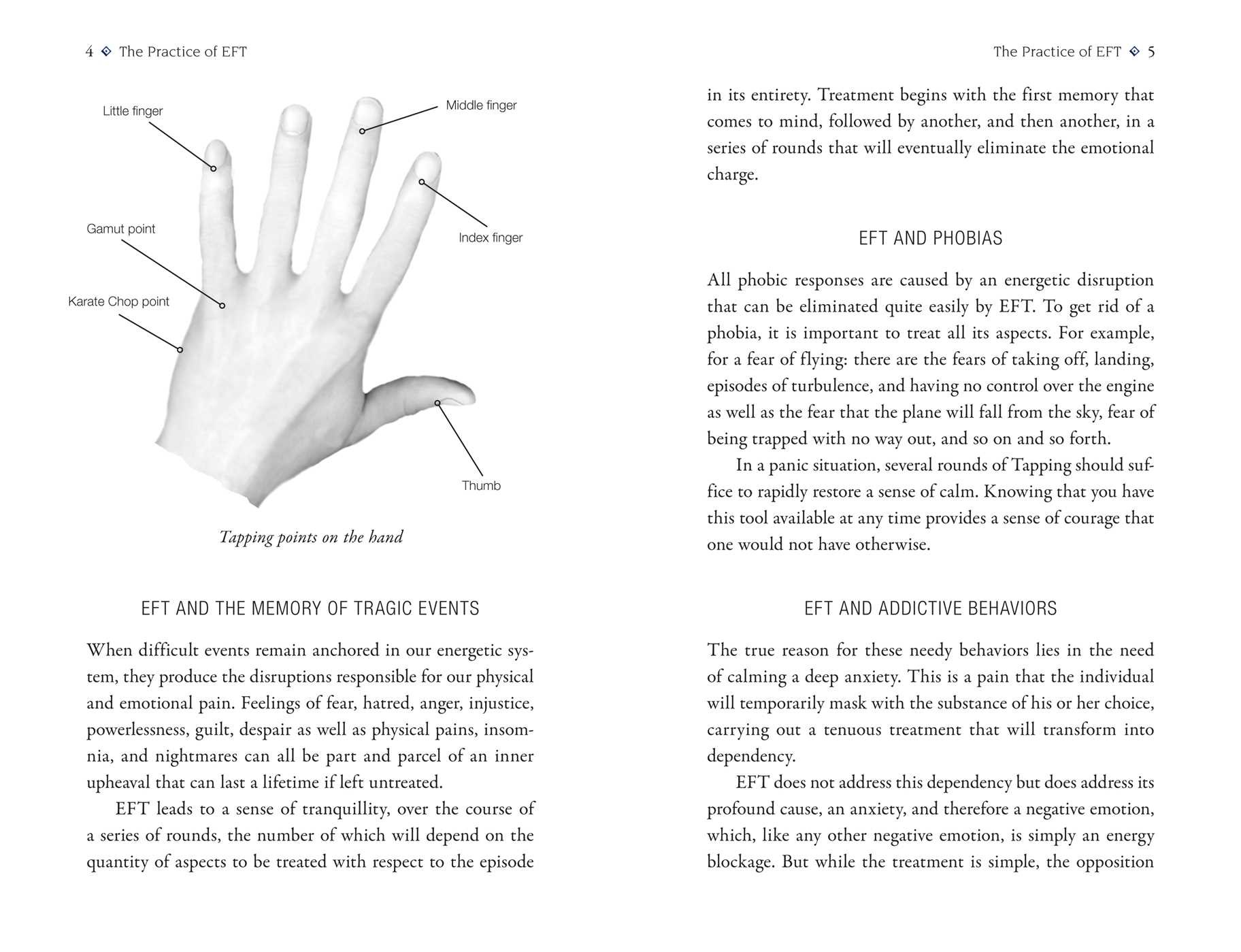 A step-by-step guide to the simple acupressure self-care technique of tapping for acute and chronic emotional, psychological, and physical ailments

• Effective for emotional conditions such as panic attacks, anxiety, depression, PTSD, grief, anger, jealousy, and phobias, such as stage fright or fear of flying, providing immediate results in many cases

• Illustrates easily accessible points to tap and in what order

Tapping, or Emotional Freedom Technique (EFT), is a simple form of acupressure that treats the energetic roots of emotional and physical suffering. By tapping on specific meridian points you can quickly and easily dissolve blockages in the body’s energy system, caused by past traumas and suppressed emotions such as grief and anger, and restore the natural flow of energy in your body, the key to optimal health and overall well-being.

In this step-by-step guide to EFT, Sophie Merle details the practice of tapping, illustrating the easily accessible points on the face, hands, and torso to tap and in what order. Explaining how to open your energetic system to EFT treatment for fast and long-lasting results, she reveals how the energy psychology practice of tapping can be applied to any area of your life but is particularly effective for emotional and psychological conditions, including panic attacks, anxiety, depression, PTSD, grief, anger, jealousy, and phobias, such as stage fright or fear of flying, providing immediate results in many cases. She also shows how this method can treat chronic pain, nausea, and headaches; alleviate insomnia and nightmares; assist physical healing from illness; encourage the release of painful memories; boost self-confidence; support weight loss; and improve concentration.

The author explains how tapping can be done anywhere, offering both the full tapping protocol, which only takes a few minutes, and a short-form version, which takes less than a minute, for acute issues. Including remarkable success stories of EFT in practice, this comprehensive guide to tapping shows how the solution to many of life’s problems is at your fingertips.

The Practice of EFT

“EFT” is the abbreviation commonly used to label a new treatment procedure, Emotional Freedom Techniques. Its treatment methods are easy to use and produce sensational results.

The central tenet of its theory is that any discontent or disorder in our lives is the result of an imbalance in the energy that flows through our bodies. Its main concern is the restoration of harmony using the meridian points of Chinese acupuncture.

EFT is also known most commonly as Tapping. This term arises from the fact that the points are lightly tapped during a treatment session.

A complete EFT sequence can be performed in less than a minute. The Tapping round follows a descending movement that travels down from the face to the hands. You must give between seven and ten light taps to each point.

SUMMARY OF THE FIVE STEPS OF AN EFT SEQUENCE

EFT AND THE MEMORY OF TRAGIC EVENTS

When difficult events remain anchored in our energetic system, they produce the disruptions responsible for our physical and emotional pain. Feelings of fear, hatred, anger, injustice, powerlessness, guilt, despair as well as physical pains, insomnia, and nightmares can all be part and parcel of an inner upheaval that can last a lifetime if left untreated.

EFT leads to a sense of tranquillity, over the course of a series of rounds, the number of which will depend on the quantity of aspects to be treated with respect to the episode in its entirety. Treatment begins with the first memory that comes to mind, followed by another, and then another, in a series of rounds that will eventually eliminate the emotional charge.

All phobic responses are caused by an energetic disruption that can be eliminated quite easily by EFT. To get rid of a phobia, it is important to treat all its aspects. For example, for a fear of flying: there are the fears of taking off, landing, episodes of turbulence, and having no control over the engine as well as the fear that the plane will fall from the sky, fear of being trapped with no way out, and so on and so forth. In a panic situation, several rounds of Tapping should suffice to rapidly restore a sense of calm. Knowing that you have this tool available at any time provides a sense of courage that one would not have otherwise.

The true reason for these needy behaviors lies in the need of calming a deep anxiety. This is a pain that the individual will temporarily mask with the substance of his or her choice, carrying out a tenuous treatment that will transform into dependency.

EFT does not address this dependency but does address its profound cause, an anxiety, and therefore a negative emotion, which, like any other negative emotion, is simply an energy blockage. But while the treatment is simple, the opposition put up by the subconscious, on the other hand, can complicate matters significantly.

Dependencies are almost always accompanied by the psychological reversal that we discussed earlier. Countering this reversal will require frequent treatment during the first days after the individual has quit taking the addictive substance. This treatment takes place during the setup stage of the EFT sequence, followed by a round of Tapping, for each craving, for as long as all the energy blockages responsible for the feeling of anxiety have not been eliminated.

Given the fact that EFT heals the anxiety responsible for the dependency, there is no risk of developing a new dependency to replace the one that has been eliminated, nor of taking on pounds and pounds of additional weight, a well-known consequence of quitting smoking.

The Serenity Procedure consists of making a list of all the difficult incidents that have occurred in our life. This period should span the time from earliest childhood to five years ago. Next EFT is applied to each of them until their memory no longer inspires any negative feeling. Fear, sorrow, and anger have all been replaced by a deep sense of tranquillity.

It is imperative to write down at least one hundred events, even more if possible. You can always begin treating the first memories without waiting to complete your list. Do not be surprised if you have trouble getting started. The subconscious mind is hardly a zealot for change. While it is wonderfully well-adapted to our life circumstances, it can oppose our desires for transformation if it decides that there are too many risks involved.

Every event you catalog should be short and precise.A situation that lasted several hours, or even several days, is comprised of different episodes that are to be treated separately. They are separate aspects of the same problem.

Write down the facts quite precisely. Do not say: “My father is abusive,” but go into the details of specific events like: “The violent spanking my father gave me in the kitchen,” “the bicycle he took away from me,” or “he belittled me in front of my friends.”

Treat one event at a time, until the entire emotional charge it carries has evaporated. In the case where it is hard to reduce, do several rounds of Tapping on all the angles of the situation. Work on a specific event only takes several moments so working at this pace you will have erased the painful mark left by one hundred difficult events in three months. You can already imagine the benefits. The ideal would be to devote fifteen minutes to the procedure every day, and more if you can.
Sophie Merle

Sophie Merle is a practitioner and teacher of EFT and Feng Shui, offering workshops and courses in the United States and Europe. She lives in Las Vegas, Nevada.