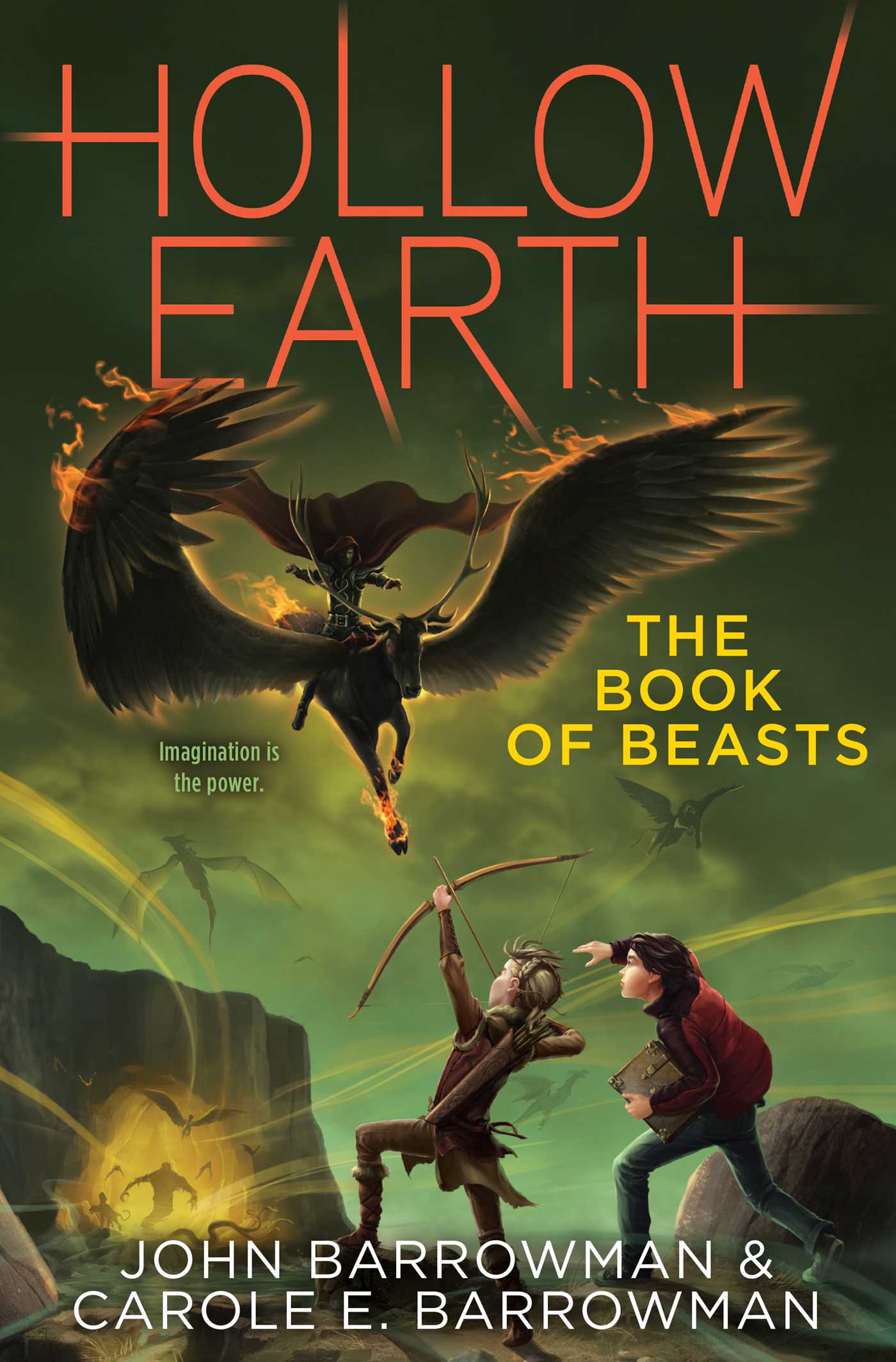 Matt and Emily Calder’s travels through time come to a thrilling conclusion in the third book of the Hollow Earth trilogy as the siblings struggle to close Hollow Earth—and keep the monsters inside.

Twins Matt and Emily Calder may be divided by time, but they are united in their mission to close Hollow Earth before the monsters inside can destroy the world. The key to success lies with their Animare talents: they can draw things into life and travel in time through art. But there are monsters outside Hollow Earth as well. Monsters intent on taking control of the beasts for themselves. And the worst monster of all is their own father…

The Book of Beasts ONE
SCOTLAND

Duncan Fox stood on the craggy hillside of Era Mina, squinting against the late-summer sun that drenched the Isles of Bute and Arran in a golden light. He was waiting for his canvas to dry, but his mind was elsewhere. With his hands deep in the pockets of his tweed field jacket, he was thinking about the visitors he had recently received: Sandie Calder and her children, Emily and Matt.

My family, Duncan thought. From a future I can hardly imagine.

He wondered if the recent hauntings he had been experiencing were a consequence of their visit.

The first time he had seen the strange figure, Duncan thought what he was seeing was a lucid dream: a state where he had a solid awareness of his surroundings while he slept. He had experienced such dreams before, but never so dramatically.

One week ago, he had sat up in bed, drenched in sweat, a vague feeling of dread raising the hair on the back of his neck. A gust of wind from Largs Bay swept open the curtains, carrying with it the smell of the seaside—salty kippers, crushed shells, briny sand. Reaching for the pitcher of water next to his bed, Duncan poured himself a glass, then promptly spilled it onto the floor. A shadowy figure had stepped out from the corner next to his wardrobe.

He hurriedly lit his oil lamp and held it above his head as the figure morphed from a ghostly presence to a fully fleshed man dressed in a brocade robe with a thick collar plate woven in shimmering golden threads—a druid, magnificent and majestic. The druid’s robes were white with a silver helix embroidered on the breast. The vision wore a crown of twisted antlers, a fur cloak draped from iron clasps at his shoulders. His left hand gripped a scepter cut from a length of knotty white pine with a carved peryton perched on its tip, and there was a sword with a peryton at its hilt in his right hand. Duncan could see him as clearly as he could see the portrait of his own grandfather hanging on the wall behind him.

The figure had remained at the foot of the bed until the light of morning banished him, leaving Fox with a vague feeling of unfinished business.

This had continued for six nights. Between nights four and five, Fox had called for his carriage and ridden alone on the coast road to Ayr to seek advice from one of the oldest Guardians in Scotland.

Frances MacDonald’s fingers were gnarled from arthritis, but her eyes were bright and her intellect keen as Duncan carefully described his vision. She pointed to the first volume of The History of Religion and the Decline of Magic in Scotland.

“That was once required reading for our kind,” she said. “You’d do well to read it now if you’re looking for answers. Lift it down for me.”

Duncan took the volume from the shelf and set the book on the table. Then he waited as her fingers slowly turned the thick pages, his hands folded behind his back, patient and respectful of her age.

“Is this who’s comin’ to ye in the dark?” she asked, stepping away from the table to reveal a full-page facsimile from an illustrated manuscript.

Duncan stared at the image. The white robe, the fur cloak, the wooden scepter with its carved peryton. Every detail, from the twisted crown to the silver helix on the figure’s breast, was identical to the figure who had been appearing at the foot of his bed.

“He is Albion. The Guardian of the Beasts in Hollow Earth.”

The old woman returned to her chair next to the cottage’s bay window and lifted her knitting onto her lap. Despite her twisted fingers, her knitting needles clacked with unnatural speed.

“Aye.” She nodded. “Hollow Earth. Many think the place a mere story told to children. But it is as real as this room.

“Albion is the first of our kind. He was called to these islands in a dream. Some believe it was the twin perytons, the black and the white, that called him to found the monastery on Auchinmurn as a safe haven for Animare and Guardians alike.”

Fox perched on the edge of a wooden chair, listening intently. The old woman set her needles on her lap and continued.

“The beasts who now live only in our stories, our myths and fables, once lived and breathed in Albion’s world. Griffins, basilisks, selkies, and more. But when magic was no longer trusted and the world had new ways of explaining matters, there was no safe place for creatures such as these. It was Albion who began the task of sealing the beasts away. He started The Book of Beasts, indexing and categorizing as he locked them far beneath the islands in the place we call Hollow Earth.”

“Have you ever heard of Albion manifesting himself in dreams in this way?” Duncan asked. “Outside Hollow Earth?”

The old woman’s eyes were starting to droop. Outside her window a farmer on his milk cart trundled along the cobbled street.

“I have heard it said that Albion is the one from whom we are all descended,” she mumbled. “Which makes the Council laws that keep us apart, when we’re all from the same stock, as daft as dust.”

Her chin dropped to her chest. Duncan realized she was snoring.

Quietly he lifted his overcoat from the back of the kitchen chair, pulled a bill from his money clip, and set it under the marmalade jar at the center of the table. As he lifted the latch on the door, the old woman suddenly roused.

“Mr. Fox,” she said. “If yer visitor is Albion, then you and your sons and daughters may be in danger.”

He stopped himself from finishing the sentence.

The old woman was referring to Sandie and the twins.
John Barrowman

John Barrowman has appeared onstage, including on London’s West End, and on-screen. He is perhaps best known for his portrayal of Captain Jack Harkness in Doctor Who and Torchwood, as well as appearances on Desperate Housewives, and Scandal. He is currently a series regular on Arrow.

Carole E. Barrowman is a journalist and a professor of English in Wisconsin.