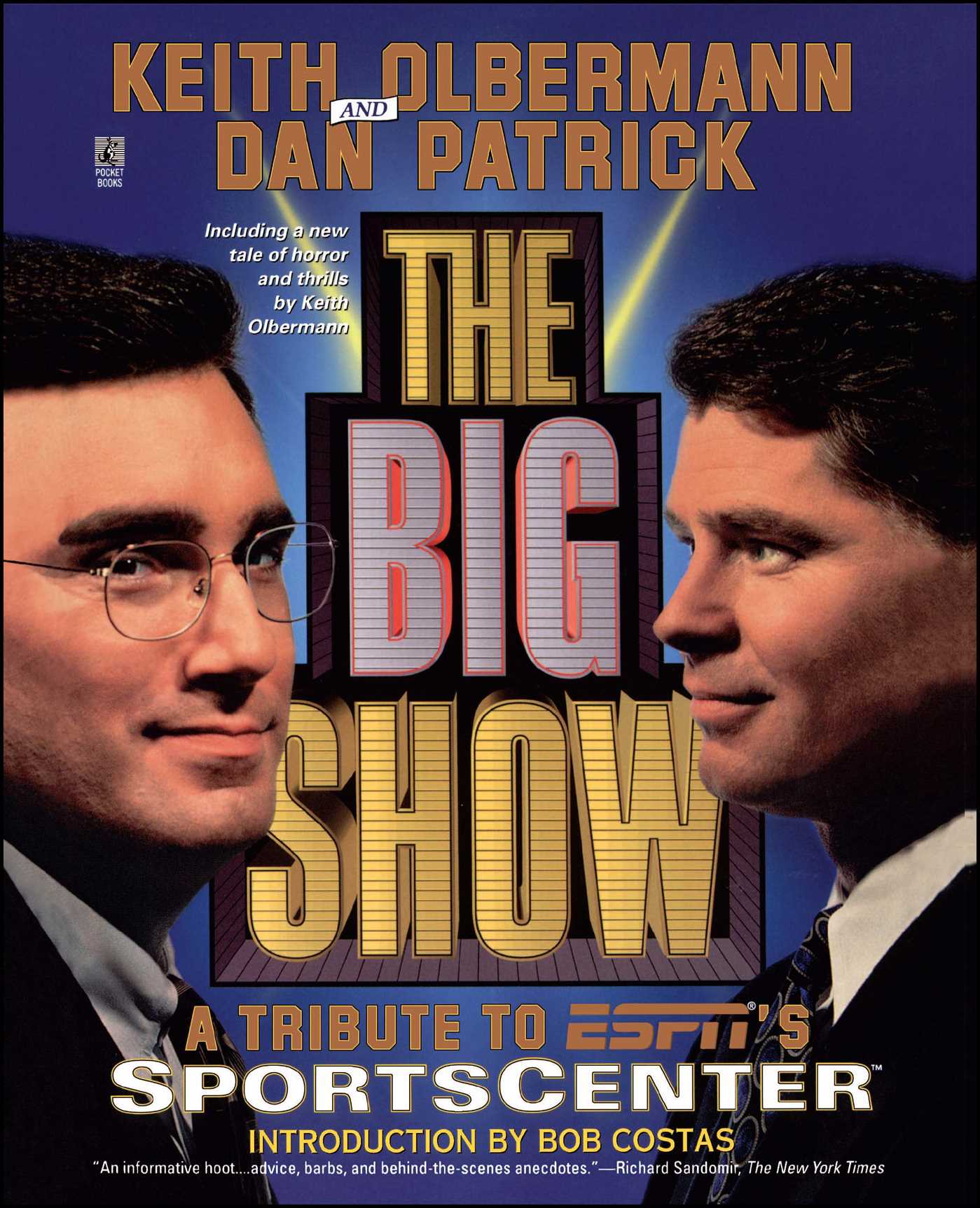 From World Sports Headquarters in historic Bristol, Connecticut, comes the book that's more colorful than Dennis Rodman's hair. Keith Olbermann and Dan Patrick, the former tag-team partners of ESPN's award winning SportsCenter, mark for the ages their most unforgettable moments, which have transformed the art of sports broadcasting -- bringing what People magazine calls their "Letterman-like loopiness and Koppelesque smarts" to the printed page in THE BIG SHOW
Less expensive (and easier to read) than a big-leaguer's autograph, The Big Show gives you the honest, horrifying, yet always entertaining story of two men, three cameras, and highlights run amok, including:

Chapter 1
Hi, hello, and how are you?

You're right about that "merely" part -- and right at the outset here I think we should mention, Dan, that it's an amazing coincidence that you and I speak in different type styles.

Stop it. Just stop it. We have a very important question we have to answer right away. People kept asking us, "Dan and Keith, barometers of the sports world you may be. Stars of television and radio, sure. But what are you doing writing a book? What exactly is the Big Show book going to be about?"

"It's going to be about nine inches high by about four inches wide by about two hundred pages long," we tell them. "That's what the hell it's going to be about." Then we explain that we were selected for People magazine's "TVs 40 Most Fascinating Stars" in 1996 and we placed ninth in TV Guide's list of the top ten performers in all of television for 1995 and all the other guys on the list had already written a book -- Seinfeld, Oprah, Marcia Clark -- and we felt it was our turn to rake in some easy cash. I mean, John Tesh has even written some music.

Right. Sort of. Anyway, we thought we could convey our take on the world of sports, pass along that kind of behind-the-scenes stuff of what goes into the making of our show, tell our dreams and hopes and favorite ABBA songs, explain why I can't drive and why it's the New York Mets' fault, and -- "

And how I invented the word "Gone." People are always asking us where all these catchphrases came from. You know, "Gone" for a home run, "The Whiff," "En Fuego," "Nothing but the Bottom of the Net," and all the other good ones. And of course the ones Keith uses, too. The ones he steals from other people, usually me.

That's right. You invented everything. The whole English language.

"Gawwwwwn!" -- give me a break! In ABBA's megahit "Dancing Queen" there's that moment when these two great singing legends pause for a moment. You know. "And then you're...gone." As old as you are, Dan, I believe that song came out even before your brilliant career began. So what if they were just repeating sounds they had learned phonetically and didn't understand a stitch of English? They still said "Gone!" Nothing is new. Not in sportscasting. Not in Swedish disco music.

What's wrong with you? Where did all this ABBA stuff come from? This is supposed to be a book about our show. We're supposed to be explaining the show, and introducing the book, and why you'd want to buy it or read it or maybe just steal it. We're supposed to be talking about all the ballplayers we know and how I got to meet Bill Murray and how Dennis Rodman wanted to write one of our commercials for us. Instead it's microdetails from the career of ABBA. What's next? "99 Luft Balloons?" Have you lost your mind entirely?

Well, we have been working together for five years now.

Could we possibly get this back on track? Where was I before you ruined it? Oh yeah. People are always asking us what this book could possibly be about and I tell them it's an attempt to translate the idea that every night we go out there and have fun with the world of sports. We show the highlights and tell the news, of course, but we're there enjoying what we're presenting. And, of course, we're doing it almost completely ad-libbed and we're seeing the highlights just as you're seeing them and that lends a certain "without a net" quality to our show that seems to attract people like a magnet. And sure, we have an attitude, we criticize the bad trends and the show-offs and the greedy players and the greedy owners, but we're there to have fun, and that's what I tell them the book's going to be about.

Of course by this point they've either walked away or taken a swing at one of us.

I do look guiltier. Why do you suppose that is? I mean, the number of times you say something really stupid on the show about a player or somebody and then I run into him at a game or somewhere and he blames me for it. Remember that thing with Bob Knight, the Indiana basketball coach? When you showed him grabbing one of his players by the shirt and you said, "At home with the Knight family?" Real good, Keith. I saw him on the road and I thought he was going to put a chair through my thorax.

My point is proved. And it's not like you always defend me or anything, bub. The awards night? When you went up to Eric Lindros of the Flyers at the ESPYs and told him I kept bashing him on the air about not playing every night and he should come over and threaten to kick my ass? I mean, what was the idea there? If he'd hit me, I would've been drooling the drool of regret out of my ear instead of my mouth. And anyway, it backfired. We wound up buddies.

Enough with ABBA already! We've got a book to start here, and you're babbling on about four singers nobody remembers anymore. Next thing you'll be working the 1899 Cleveland Spiders baseball team into it or what Joe Magrane did in the 1987 World Series or who won the All American Football Conference title in 1946!

It is that kind of historical context that allows you the freedom to express yourself every night on The Big Show. If we don't know our stuff, all the goofiness doesn't matter one whit. And the same goes for the Big Show book. High good humor and satire, yes. Without a question. But if there's no knowledge, no awareness of the past still hovering around us like a shielding diaphanous cloud, we are lost -- and this book is used by some guy to even out that one short leg on his desk. Historical context. Paramount.

Historical context? Like the time you said it was an outrage that Bill Veeck hadn't even gotten one vote in the baseball Hall of Fame ballot and it turned out that was because he was elected the year before? Is that the kind of shielding diaphanous cloud of history you mean?

It had been a very long week, Dan. You know that.

You're right. I'm sorry. Our dear reader is going to get the impression that we hate each other. In fact, Keith and I have been friends since we worked together, years ago, at CNN. I was even at his going-away party. Keith gave me some very good advice about my career, and to repay him, I've carried him professionally since he joined me on The Big Show.

Oh, now I get it, Dan! We're writing a fictional account of the show! Well, let's get the obligatory facts out of the way. We have lots of folks to thank, not merely for this book, but for all the moments in our lives that led up to this book. This is usually the part you skip to get to the good stuff. We'd like to warn you that this could be the "good stuff."

Obviously we'd like to thank our editor Pete Wolverton, who put this together, and our agent Esther Newberg, who put this deal together. And of course, Bob Costas and his son Keith for writing such a lovely, and obviously heavily exaggerated, foreword. And also Andy Ward, who originally approached us about the concept.

Andy was promptly turned down by his own farsighted bosses and then had the presence of mind to get out of publishing altogether.

Well, let's get started, shall we? But one more thing first, Dan...

You need some more rouge.

Detroit Free Press For those of you scoring at home...buy the book.

The Sporting News With Olbermann and Patrick, SportsCenter...achieved the perfect pitch.