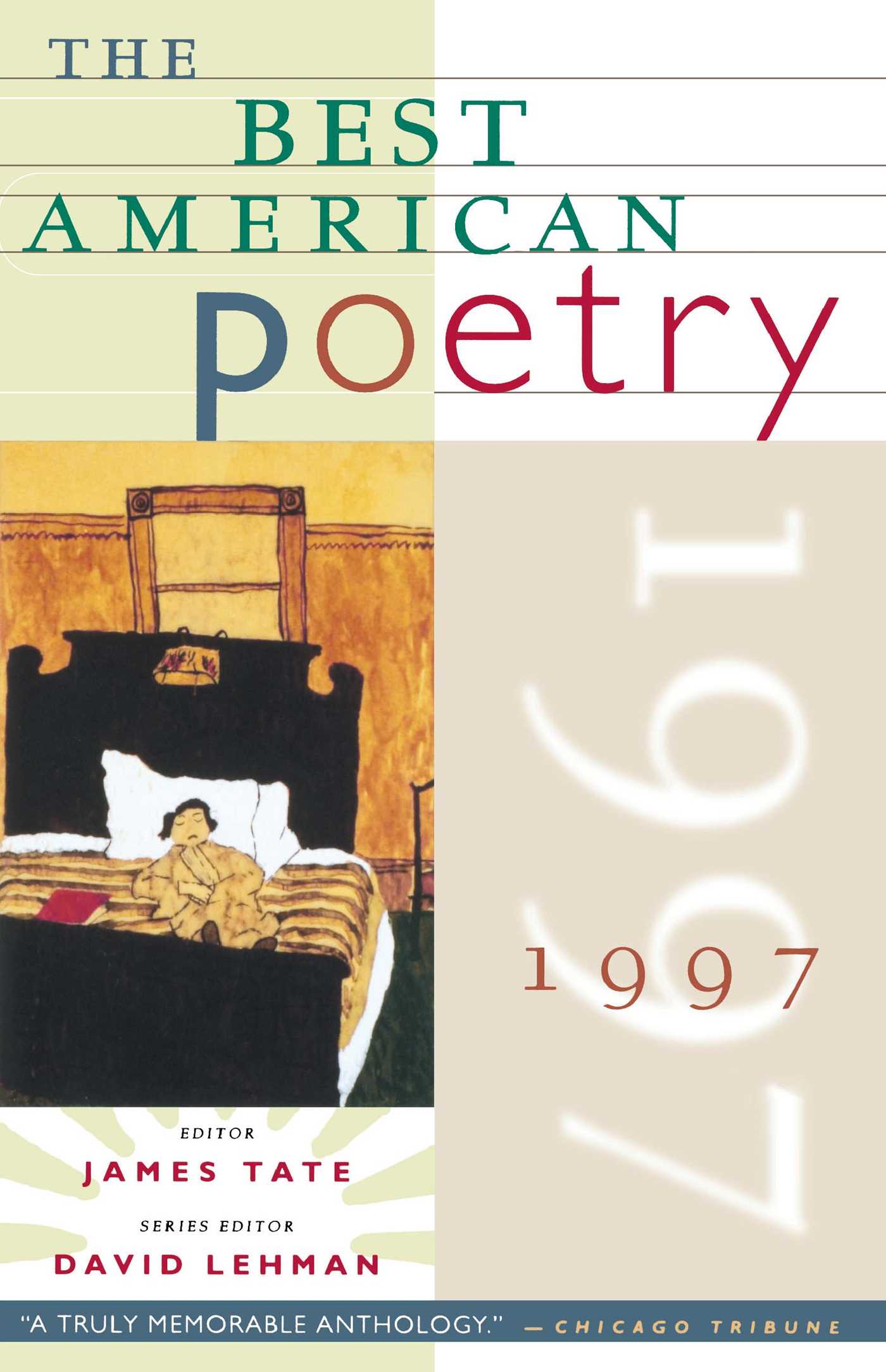 Now celebrating its tenth anniversary, The Best American Poetry is the one indispensable volume for readers eager to follow what's new in poetry today. Sales continue to grow and plaudits keep coming in for this "high-voltage testament to the vitality of American poetry" (Booklist). Selected by prizewinning guest editor James Tate, the seventy-five best poems of the year were chosen from more than three dozen magazines and range from the comic to the cosmic, from the contemplative to the sublime. In addition to showcasing our leading bards -- such as John Ashbery, Jorie Graham, Robert Hass, and Mark Strand -- the collection marks an auspicious debut for eye-opening younger poets. With comments from the poets themselves offering insights into their work, The Best American Poetry 1997 delivers the startling and imaginative writing that more and more people have come to expect from this prestigious series.

Chapter 1
Back in the World

I took a shortcut through blood

to get back to you,

but the house where I left you is empty now.

You've packed up and moved on,

leaving this old photograph of the two of us,

taken before I left for Viet Nam.

You've cut yourself out of it,

torn your half in pieces

and lain them on the mantel,

where your knickknacks used to be:

those godawful Hummels you'd been saving for years

and a small glass vial you said

A thick film of dust comes off on my fingers,

when I rub them across the years that came to separate us.

In a corner of the living room, facing a wall,

I find my last painting of you.

your head hanging over the side,

your hair, flowing to the floor

There, Max, the cat, is curled

in a grey, purring blur,

all fur and gooseberry green eyes that stare at me,

as if accusing me of some indiscretion

and rises as if he's been spooked,

runs through the house,

then swoops back to his place beside you,

and beside the night table,

on which I've painted a heart on a white plate,

and a knife and fork on a red checkered napkin.

You hate the painting. You say I'm perverse

to paint you that way, and worse, an amateur.

"Do you want to tear my heart out and eat it

so you can prove you don't need me?" you ask.

as you dress for some party

you claim you are going to, but I'm on to your game.

It's your lover who's waiting for you.

then I run to the bathroom,

grab a handful of Trojans

and throw them at you,

as you slam the door on me,

before I can slam it on you.

You don't come back, until you get word

that I've enlisted in the army.

I'm packing when you show up.

and you tell me that it's perverse of me too.

"Who are you kidding, you, a soldier?

I give you the small canvas I've just finished.

after I ate your heart."

We part with a brief kiss like two strangers

who miss the act of pressing one mouth

against another, yet resist, resist.

a day that seems as if it will never end,

in an explosion that sends my body

flying through the air

in the white glare of morning,

when without warning, I step on a landmine

and regain consciousness to find

I'm a notation on a doctor's chart that says,

Now I imagine myself racing through the house

just as Max did once,

only to return to myself, to the bed,

the night table, the canvas in my lap

and my brush, poised above it.

When Max, toothless and so old,

his hair comes out in clumps, when I touch him,

half sits, half collapses beside my wheelchair,

I begin to paint, first a black background,

then starting from the left side,

a white line, beside a red line

beside a white, beside a red,

each one getting smaller and smaller,

until they disappear off the edge of the canvas.

I title it "Amateur."

I call it art.