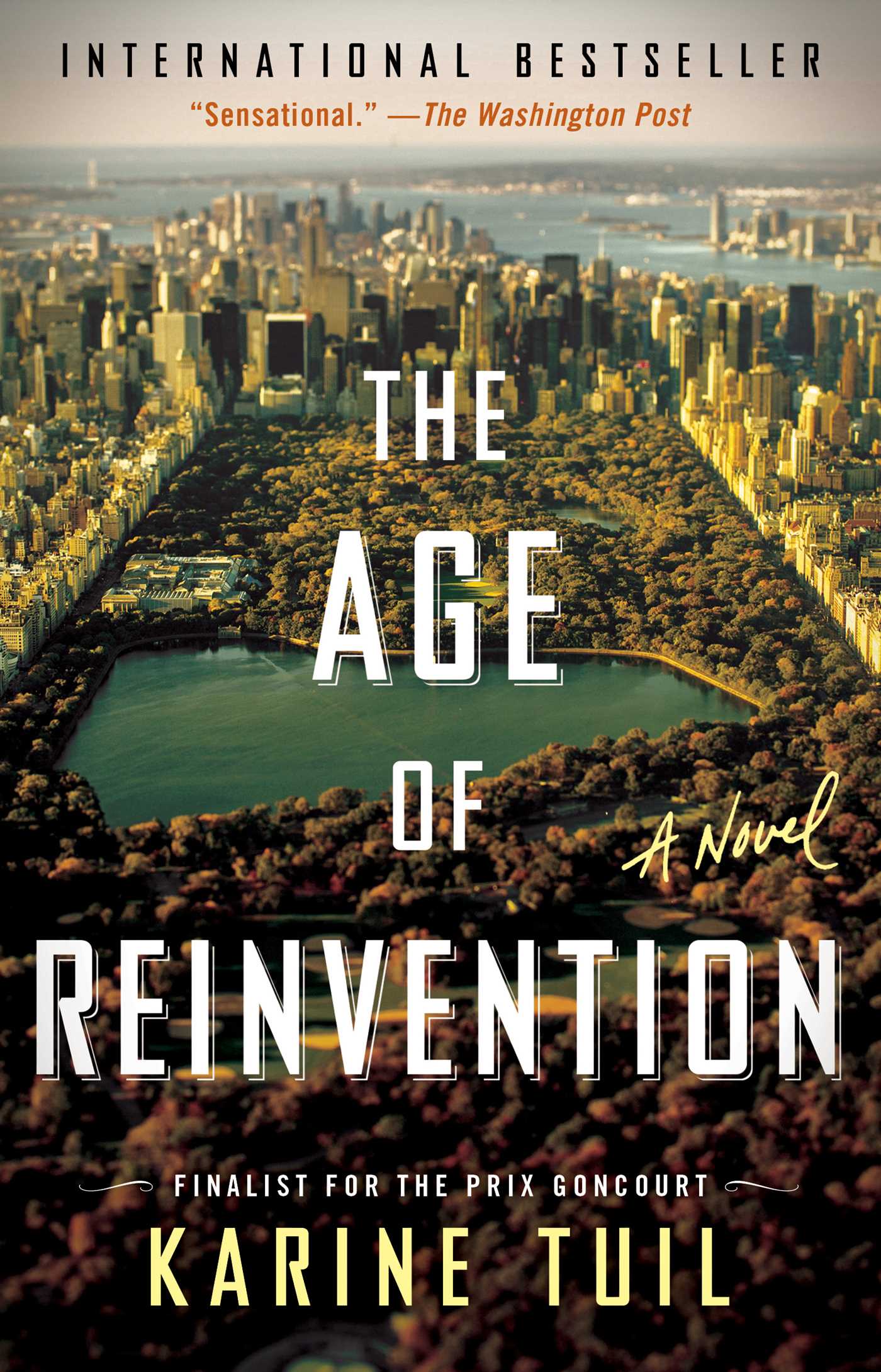 The Age of Reinvention

By Karine Tuil
LIST PRICE $11.99
PRICE MAY VARY BY RETAILER

An international bestseller and finalist for the Prix Goncourt, France’s most prestigious literary award, The Age of Reinvention is a "suspenseful...Gatsby-esque odyssey...laced with provocative observations of prejudice, politics, and sexism" (Publishers Weekly, starred review).

Top Manhattan criminal defense attorney Sam Tahar seems to have it all: fame, fortune, an enviable marriage to a prominent socialite, and two wonderful children. But his success is built on a lie—he isn’t the person he pretends to be.

Growing up a poor Muslim immigrant inside a grimy Paris apartment tower, Samir Tahar seemed destined for a life on the margins—until he decided “he was going to cut through the bars of his social jail cell, even if he had to do it with his teeth.” At law school in Montpelier, France, he became fast friends with Jewish student Samuel Baron. The two were inseparable until the irresistible Nina, torn between the men, ultimately chose Samuel. Samir fled to America, where he assumed Samuel’s identity and background while his former friend remained stuck in a French suburb, a failed, neurotic writer seething at Samir’s overseas triumphs.

Decades later, the three meet again in this dark, powerful story of a deeply tangled love triangle that becomes subsumed by the war on terror. Called “a masterful novel” (Paris Match) and “a work of great magnitude” (Le Figaro), The Age of Reinvention is an intriguing tale about the wonderful possibilities and terrible costs of remaking oneself.

By clicking 'Sign me up' I acknowledge that I have read and agree to the privacy policy and terms of use. Free ebook offer available to NEW US subscribers only. Offer redeemable at Simon & Schuster's ebook fulfillment partner. Must redeem within 90 days. See full terms and conditions and this month's choices.
This reading group guide for The Age of Reinvention includes an introduction, discussion questions, and ideas for enhancing your book club. The suggested questions are intended to help your reading group find new and interesting angles and topics for your discussion. We hope that these ideas will enrich your conversation and increase your enjoyment of the book.

Elite Manhattan criminal defense attorney Sam Tahar seems to have it all: fame, fortune, good looks, an enviable marriage to a prominent socialite, and two wonderful children. But his life is a house of cards; everything that he has achieved stems from a single lie he told in a moment of weakness.

Born into a poor Muslim family, Samir clawed his way to law school, where he befriended Jewish student Samuel Baron. The two were inseparable until the alluring Nina, torn between the men, ultimately chose Samuel, the weaker of the two. Determined as ever, Samir fled to America, assuming his old friend’s Jewish identity while Samuel remained stuck in a French suburb, a failed, neurotic writer still bound to an increasingly resentful Nina.

Twenty years later, the three meet again. Now, all their fates hang in the balance as their tangled love triangle collides headlong with the complex realities of life at the start of the twenty-first century.


Questions and Topics for Discussion

1. The author opens the novel with quotes from Turkish novelist Orhan Pamuk, French intellectual Simon de Beauvoir, and Belgian writer Marguerite Yourcenar. Why do you think she chose to begin with these three epigraphs? How did they set the tone for your reading experience, and did their meaning shift once you finished the novel?

2. The Age of Reinvention opens with the following line: “Let’s begin with the wound. Yes, let’s begin there,” referring to a scar on Samir Tahar’s neck, the remnant of a brutal gash that he received as a young boy. Why is Samir’s scar a launching point for this story? How does the wound function symbolically in the novel?

3. The novel is written in a close third person point of view, telling the story from inside the heads and hearts of its characters. But at the same time, the narrator is also somewhat of a know-it-all, or a gossip. Did you find this style of narrator to be appropriate for the novel? Did the narrator seem male or female to you? Can we trust everything that he or she says?

4. Much of the novel is written in run-on sentences, with frequent slashes and parentheticals populating each chapter. How does this book’s unique syntax contribute to its tone and feel?

5. Footnotes play a key role throughout the novel. Since footnotes are much more frequently utilized in nonfiction—and for academic writing in particular—why do you think the author chose to employ footnotes in her novel, and what affect do they have on the experience of reading the novel? How do you think she decided what to include in a footnote versus within the body of the text?

7. At the beginning of the novel, on page 10, Samuel is described as a person “for whom the whole of existence was nothing but a mass of neuroses and whose only ambition was to use this mental suffering as material for a great book.” Do you find Samuel’s morals to be questionable? What about as compared to Samir?

8. At some point in their lives, both Samuel and Samir assume identities that aren’t technically their birthrights—one inadvertently, and one intentionally. If the identity that you present to the world isn’t the one you are born with, does that necessarily mean it isn’t true or authentic? Does intention matter?

9. Compare and contrast Samir’s experiences with prejudice in his early years in France and as an adult in America. If Samir had been open about his true ethnic background during his time in America, do you think the authorities would have treated his case differently?

10. Did you find Nina’s character to be as fully developed as her male counterparts? Or is she a construct of how the protagonists view her? If so, is this indicative of her role within society, or is it more of a commentary on Samir’s and Samuel’s limited perspectives?

11. In the same vein, if Samir and Samuel had been women and Nina a man, how would this have shifted your experience of the book? Would Samir have been able to attain the same level of success? What role does gender play in this book?

13. What did you make of Ruth’s reaction to discovering the truth about her husband’s identity? Did it surprise you? Was she justified? How else might she have responded?

14. Success is a major theme in The Age of Reinvention. Do you agree with the characters’ definitions of personal and professional success? In your own experience, can the two truly co-exist? Are morality and success portrayed as opposites in the world of the novel, and where does money figure into the equation?

15. In the last scene of the book, a newly-freed Samir “suddenly stops and gazes up defiantly and the skyscrapers stretching up above him . . . an outrageous, arrogant aesthetic, the lurid beauty of the city awakening, a dusty landscape pierced with shards of iridescence” (pp. 397–399). This is a moment of profound reflection for Samir, but what are the particular realizations he has come to? When you read the last line (“the next step is his”), how do you interpret it? How will Samir live his life from now on?

1. Purchase a copy of Memoirs of a Beautiful Daughter by Simone de Beauvoir. Read about her experience growing up in a bourgeois French family shackled by the expectations of her social class and see what connections you can draw between this writer’s experience and that of the characters in The Age of Reinvention. In your view, how do fiction and nonfiction differ in their ability to tackle these real world themes?

2. Search the internet for information about recent examples of anti-Muslim activity and Muslim-led acts of violence in France. Do you think France is more vulnerable than the US to such activities? If so, why would that be the case? Did you find it surprising that Samir would find it much easier to get a job at a top law firm when he was perceived to be Jewish? What was it about Samir’s brother that made him susceptible to extremist organizations, whereas Samir would never have considered joining such a group?

3. Dust off your old copy of The Great Gatsby by F. Scott Fitzgerald or watch the 2013 Baz Luhrmann adaptation starring Leonardo DiCaprio. Discuss the similarities and differences between Jay Gatsby and Samir Tahar, and between Daisy Buchanan and Nina. Both tales are primarily set in New York, but how do the differing time periods—roaring twenties versus the present day—change the way the characters respond to moments of crisis? Near the end of both books there’s a moment when the wealthy and elite close ranks against an outsider who has infiltrated their world, but Gatsby’s fate is far different from that of Samir. Compare and contrast what happens to these two outsiders. 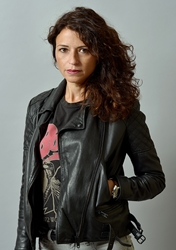 Karine Tuil is a playwright and the award-winning author of eight previous novels. She lives in Paris.

“Sensational . . . Tuil is pursuing something sophisticated [with] this high tension plot . . . Aside from the wit and intrigue of this ingenious story, chasing these troubled characters around the wheel of fortune makes the thrashing effects of modern life seem all the more apparent.”

"A grounded, sharp and astonishing novel that immerses us in fear, politics and the cold-blooded terror recounted in today's trending news stories.”

"Karine Tuil’s astonishing fictional saga… makes you understand the relentless agony of being left out in the cold simply because of who you are. Tuil describes her fully fleshed-out characters with an explosive and original narrative style."

“Suspenseful . . . [A] Gatsby-esque odyssey laced with provocative observations of prejudice, politics, and sexism. . . . [A] secret lights the fuse on the twisty plot, but where it eventually explodes comes as a complete shock."

“Karine Tuil – who should be admired for the boldness of her exploration of the thorny issues of 21st-century racial prejudice in France and the United States – plots her story like a pro, the twists and turns that lead to Samir’s downfall so teasingly interwoven that when the penny drops it does so with a thunderous crash.”

The Age of Reinvention

By Karine Tuil
LIST PRICE $11.99
PRICE MAY VARY BY RETAILER