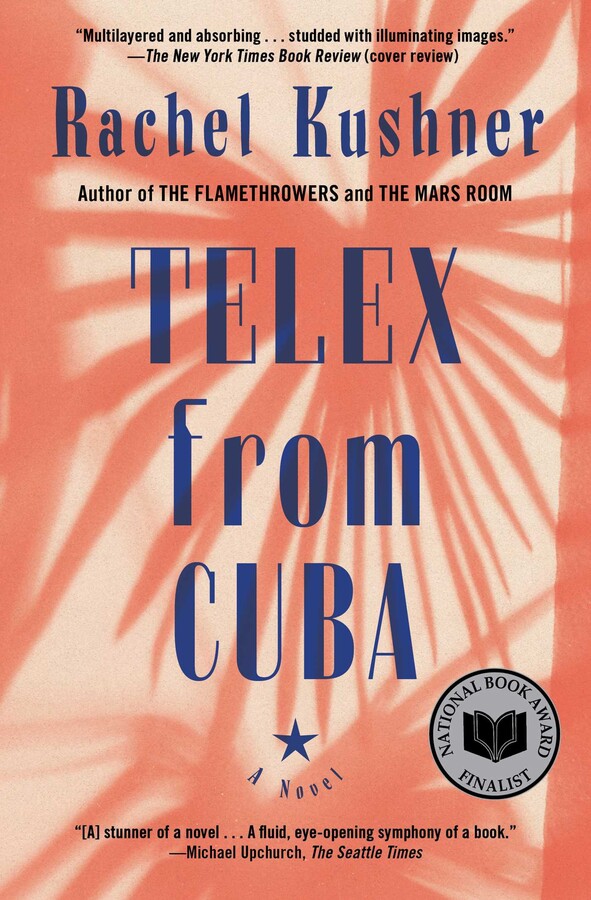 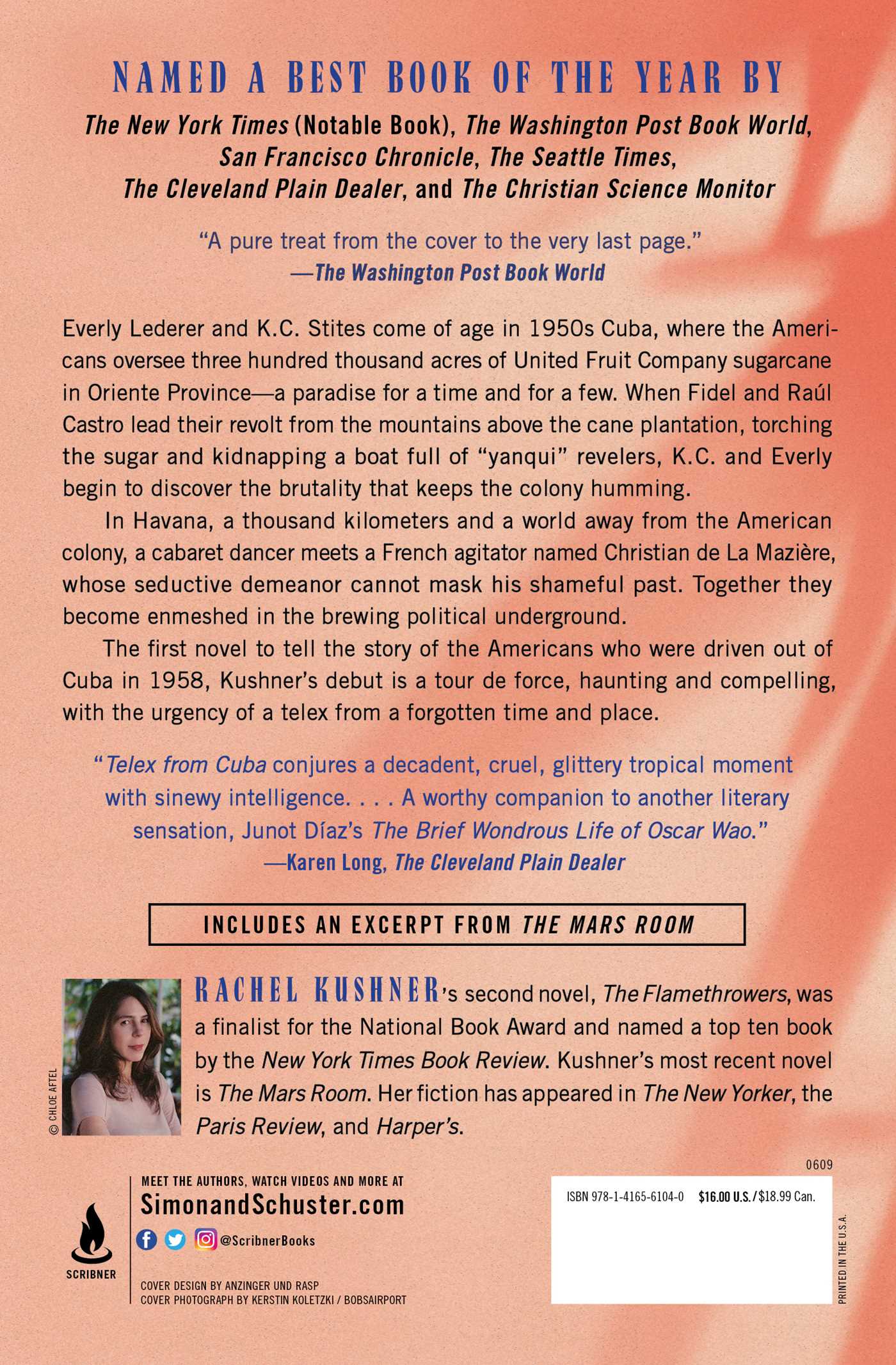 By Rachel Kushner
LIST PRICE $16.00
PRICE MAY VARY BY RETAILER

Finalist for the National Book Award for Fiction

Young Everly Lederer and K.C. Stites come of age in Oriente Province, where the Americans tend their own fiefdom—three hundred thousand acres of United Fruit Company sugarcane that surround their gated enclave. If the rural tropics are a child's dreamworld, Everly and K.C. nevertheless have keen eyes for the indulgences and betrayals of the grown-ups around them—the mordant drinking and illicit loves, the race hierarchies and violence.

In Havana, a thousand kilometers and a world away from the American colony, a cabaret dancer meets a French agitator named Christian de La Mazière, whose seductive demeanor can't mask his shameful past. Together they become enmeshed in the brewing political underground. When Fidel and Raúl Castro lead a revolt from the mountains above the cane plantation, torching the sugar and kidnapping a boat full of "yanqui" revelers, K.C. and Everly begin to discover the brutality that keeps the colony humming. Though their parents remain blissfully untouched by the forces of history, the children hear the whispers of what is to come.

Kushner's first novel is a tour de force, haunting and compelling, with the urgency of a telex from a forgotten time and place. 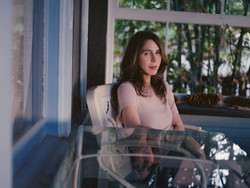 Rachel Kushner is the author of internationally acclaimed novels The Mars Room, The Flamethrowers, and Telex from Cuba, as well as a book of short stories, The Strange Case of Rachel K. She has won the Prix Médicis and been a finalist for the Booker Prize, the National Book Critics Circle Award, and was twice a finalist for the National Book Award in Fiction. She is a Guggenheim Foundation Fellow and the recipient of the Harold D. Vursell Memorial Award from the American Academy of Arts and Letters. Her books have been translated into twenty-six languages.

"Multilayered and absorbing... Studded with illuminating images....Kushner has fashioned a story that will linger like a whiff of decadent Colony perfume." — Susann Cokal, The New York Times Book Review (cover review)

"With its sharp detail and precisely drawn characters, Telex from Cuba offers a compelling look at a paradise corrupted." —People

"Kushner has written a gripping tale of what it was like to live through a momentous time. It is a powerful, haunting look at the human side of revolution." —Booklist

“A pure treat from the cover to the very last page. It's the kind of thing you should stock up on to give sick friends as presents; they'll forget their arthritis and pneumonia, I promise, once they walk into a land that's gone now, but not yet quite forgotten: Cuba in the last few years before Fidel Castro took over…. ‘Lost’ and ‘Gone,’ as F. Scott Fitzgerald wrote in the early pages of "The Last Tycoon," lost and gone. A world we'll never see again, any part of it. Rachel Kushner uses her considerable powers to bring it back for us, one last time.”—Carolyn See, Washington Post Book World

“[A] lush, meticulous, cinematic debut novel…. Kushner’s vivid renderings of country clubs and cane shacks are due in no small part to her access to primary sources.”—Megan Deem, Elle

“Kushner brings both a reporter's meticulous research and a novelist's flair for the fantastical to her examination of Cuba before the revolution….she illuminates both the natural beauty and savage inequities of an island constantly on the cusp of lawlessness….a snapshot from a long-gone era.”—Entertainment Weekly

“Kushner fills the novel with enough vivid details to make readers feel as if they are on the island at the zenith of American prosperity…. Kushner’s evocation of the Americans’ decline is fresh and compelling. She takes us to a place and time we’ve seldom visited before.”—David Abrams, San Francisco Chronicle

“For all its political currents, Telex never reads like a lesson. This is largely because the novel’s ideas are expertly blended into its story line, which gains momentum with thrillerlike passages, stunning descriptions and a compelling cast….[Telex from Cuba] elegantly weaves together a gripping story of individual and their lives leading up to one of the most notorious revolutions of the twentieth century.”—Jamie L. Parra, Time Out New York

“In the passages set among the American expatriates, Kushner displays a keen sense of the detail that reveals human nature. With its depictions of colonial privilege, excess and hubris, Telex from Cuba seems in the tradition of colonial novelists that includes Graham Greene, W. Somerset Maugham, Evelyn Waugh and William Boyd.”—Chauncey Mabe, South Florida Sun-Sentinel

“[A] stunner of a novel…. A fluid, eye-opening symphony of a book….Kushner's period detail is terrific, and her characters — stiff-necked American bosses; their more sympathetic, acerbic or fluttery wives; their wide-eyed offspring for whom Cuba, in some cases, is the only home they've known — are finely drawn….. A last master stroke is the inclusion in the cast of a Havana exotic dancer, Rachel K, who has clandestine connections with every power player in the book. It's a bold piece of artifice that works: a trickster surrogate who lets author Kushner vicariously savor the excess and glamour of the era she depicts, while also indicting it.”—Michael Upchuch, Seattle Times

“Kushner has an eye for detail and writes so engagingly readers may not even realize they're getting a history lesson.”—Christian Science Monitor

“Rachel Kushner's debut novel richly portrays the life of corporate Americans who lived high and mighty in Cuba just before the crush of Castro's revolution….written with much skill, beauty and wisdom.”—David Loftus, The Oregonian

“A lush novel set in 1950s Cuba when American families who ran sugar and nickel operations were caught up in Fidel Castro's revolution.”—Chicago Tribune

“A terrific novel … memorable … the kind of book that will make Castro glad he retired so he can have time to read books like this.”—Michael Ventre, MSNBC.com

“This is an astonishingly wise, ambitious and riveting novel set in the American community in Cuba during the years leading up to Castro's revolution—a place that was paradise for a time and for a few. The first novel to tell the story of the Americans who were driven out in 1958, this is a masterful debut… Kushner's novel is a tour de force, haunting and compelling with the urgency of a telex from a forgotten time and place.”—Ellen Shapiro, Times Union (Albany, NY)

“Rachel Kushner’s first novel is a work of great care and research, directed at recreating a place that history has erased from the map…. With impressive fluency, Kushner speaks in the voices of a series of latter-day colonialists…. Kushner is adept at profound description and real suspense.”—Carla Blumenkranz, Bookforum

By Rachel Kushner
LIST PRICE $16.00
PRICE MAY VARY BY RETAILER