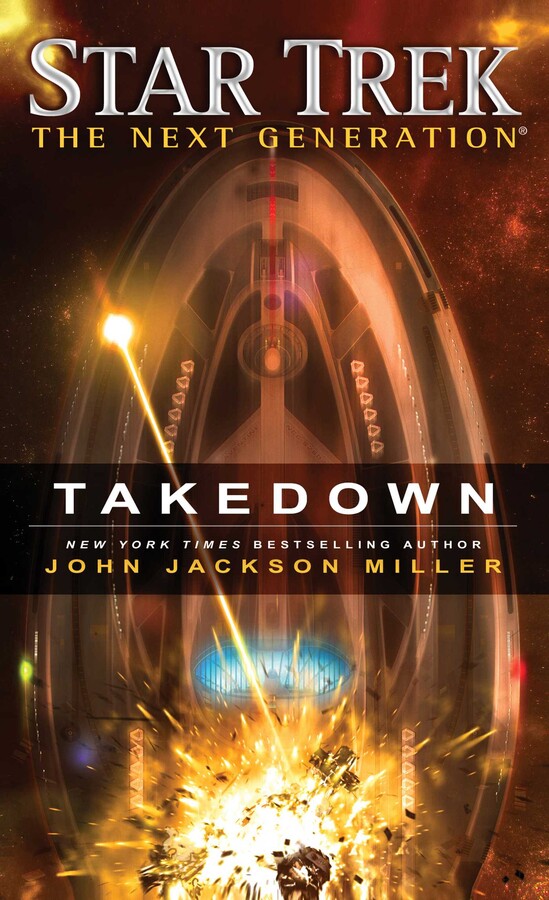 An all-new novel of Star Trek: The Next Generation—one of the most popular Star Trek series of all-time, featuring the adventures of Captain Jean-Luc Picard and the crew of the U.S.S. Enterprise!

When renegade Federation starships begin wreaking destruction across the Alpha Quadrant, Captain Jean-Luc Picard and the crew of the U.S.S. Enterprise are shocked to discover that the mastermind behind this sudden threat is none other than Picard’s protégé and friend: Admiral William T. Riker. The newly minted admiral is on board the U.S.S. Aventine as part of a special assignment, even as the mystery deepens behind his involvement in the growing crisis. But the Aventine is helmed by Captain Ezri Dax—someone who is no stranger to breaking Starfleet regulations—and her starship is by far the faster vessel…and Riker cannot yield even to his former mentor. It’s a battle of tactical geniuses and a race against time as Picard struggles to find answers before the quadrant’s great powers violently retaliate against the Federation…

Star Trek: The Next Generation: Takedown One
The one good thing about having a job that took you to hell and back was that you slept soundly. All your nightmares had already happened during the day.

William Riker had always slept well. But this morning, rising was the hard part—and he wasn’t surprised in the least to discover he was already dressed. He’d slept in full uniform many times as an overworked ensign, never as an admiral. But this behavior made perfect sense: He’d been through the wringer in recent days. He was just glad he’d made it to the bed. Falling asleep in a turbolift wouldn’t have done, at any rank.

He knew he’d earned being this tired. There had been another voyage to perdition—or worse—just behind him, but it made his head hurt to think much about it. It didn’t matter. The best way to escape a bad day was to start the next.

Or to try to start it, at least. Riker’s muscles objected as he attempted to sit up in bed, and he nearly fell back down. Standing was the next frontier, and that took longer to accomplish as well. Finally, he succeeded. Looking groggily around the VIP quarters aboard Starship Titan, he wondered for a moment where his wife was—before remembering the vessel’s destination was Betazed, her homeworld. That was one of the last things he’d heard before going to sleep. Deanna had hoped to take their daughter to Betazed’s capital city on a visit, if they had the time.

The time. He checked it as he shambled to the mirror. Sixteen hours, he’d slept. Riker shook his head. It was a good thing he wasn’t on duty of any kind. But then, oversleeping was the bad dream of an ensign. Admirals’ problems were a lot worse; he’d held the rank just long enough to learn that. And his body showed it. The face in the mirror was a fright. His dark, gently graying hair had gone this way and that during his repose, and a whole lot of new whiskers had appeared.

“Must have been some party,” he mumbled. His condition owed to something else entirely, but it didn’t matter. Drydock was about cleanup work, and that went for people just as well as their ships. He set to making himself presentable.

A short time later found Riker in the turbolift. He didn’t fall asleep on this ride either—but he wouldn’t have been able to snooze for long in any event. The doors weren’t halfway open when a firm Vulcan voice declared, “Admiral on the bridge!”

“You make a fine wake-up alarm, Tuvok.” Riker looked over to the tactical station, where the dark-skinned Vulcan didn’t acknowledge the joke. Tuvok simply bowed his head slightly and turned back to his console.

Stepping onto the bridge, Riker looked up and saw through the forward viewport that Titan was indeed orbiting above Betazed, the vessel parked near a large mushroom-shaped space station. The ship had been ordered here for replacement of faulty parts for some subsystem or other; it wasn’t Riker’s job to know about it anymore. That responsibility lay with the woman who looked back at him from the captain’s chair.

“Welcome, Admiral,” Christine Vale said. “How are you?”

“Forgivable, after what you’ve—” Apparently thinking better of her comment, Vale stopped in midsentence and gestured ahead instead. “I’m afraid you missed Counselor Troi by a few minutes. She said to let you sleep.”

Walking past the command chairs, Riker studied the scene outside more closely. He’d never heard of Betazed Station 4 before, much less visited. Its spacedock doors were open, waiting to accept the Luna-class vessel. Just beyond the station, he could see a shuttle heading for the blue-green planet below.

That’s one of ours, he thought. But before he could ask about it, a chirp came from the communications officer’s panel. “Shuttlecraft Armstrong hailing us.”

Riker looked back to see Vale smiling at him. “Someone wants to say hello,” the redheaded woman said. “On-screen.”

Turning back forward, he saw the giant image of his little dark-haired daughter waving at him. “Hailing frequencies open, Daddy.”

“Hello, Natasha.” Riker put up his hand in a slight wave and smiled wanly. “You flying that alone?”

“She wants to,” Deanna Troi said, appearing over the child’s shoulder. “She takes after her father.”

Riker nodded. Titan’s bridge wasn’t really the place for a family call, and out of the corner of his eye, he could see members of the crew turning away to hide their amused expressions. Several seconds passed, silently, with neither of them talking: Deanna would have known he wouldn’t want anyone else asking about his health, not here. She, at least, looked well rested—and as beautiful as the day he’d met her. “Why did you take a shuttle?”

“Admiral,” Vale said, “we’ve taken the transporters offline in preparation for the new upgrade equipment we’re getting from spacedock.”

“Natasha thought it’d be more fun to fly over this way,” Deanna said. “She likes to look at the clouds as we—”

Before Deanna could finish the sentence, an alarm screeched aboard Titan—and Riker heard an echo from Armstrong’s cabin, where a similar alert went off. “Warning,” announced a computerized voice aboard Titan. “Plasma storm approaching, high magnitude.”

“Here?” Vale seemed startled. “We weren’t expecting anything like that.”

Riker looked up to Deanna on the screen. “Deanna, shields, now!”

He grabbed for the railing at the rear of the bridge even as the world around him went sideways. Titan shook, apparently battered by a flood of plasma ejected from Betazed’s sun. Yet his eyes never left the forward viewscreen. Lit by the unholy fury of whatever was outside the shuttle, Deanna clung desperately to Natasha. Riker could barely hear the child screaming over the din of impact.

Riker looked around, not understanding. Like many other populated areas, the Betazed system was monitored by satellites that transmitted information faster than light, via subspace. Even a freak plasma storm should have been preceded by some warning before a tsunami of fire and radiation struck. And yet, here it was, shaking Titan like a tree in a hurricane.

And Armstrong was bearing it far worse. “Counselor!” Vale yelled, clutching the armrests of her chair. “What’s your condition?”

“Not good!” Internal lights strobing across her terrified face, Deanna punched at controls with one hand while hanging onto Natasha with her other arm. “Shields failed. Losing structural integrity!”

Forgetting who was in command, Riker barked, “Beam her out of there!”

“Engineering reports transporters will take three minutes to be placed back online,” Vale said. “Helm, put Titan between the solar wind and Armstrong!”

“It’ll take a moment, Captain,” came a voice from behind her. “We’re still oriented for spacedock approach.”

Damned repair mission! With the ship turning into the storm, Riker lurched over to a control panel whose operator had fallen away. Titan rocked and quaked, fighting against the fiery tide. Riker found his bearings and checked the ships’ relative positions, trying his best not to focus on Natasha’s wail, now in the background but unmistakably there. “Any ideas?”

“I have one, Admiral,” Tuvok said, his fingers a blur over the keypad. “I may be able to extend Titan’s shields to cover the shuttle.”

“It will require reshaping the shield on the side of Titan facing the shuttle into a hyperbolic paraboloid, to maximize its range and effectiveness.”

“The spatial geometry needed is complex,” Tuvok said, seemingly calculating even as he tried to make himself heard. “And Titan is in motion, further complicating—”

A deafening crack came from above—followed by plummeting metal beams as the supports holding part of the bridge’s storm-weakened ceiling gave way. One girder swung down like a club, belting Tuvok from behind and slamming him into the console. He collapsed, bleeding and senseless.

“Tuvok!” Without regard for his own safety, Riker dove into the area near the collapse. Tuvok was alive but out cold.

Vale called out to him. “Armstrong’s hull is failing!

Riker stepped over the fallen Vulcan to reach his console, hoping against hope that he only needed to push a button to enact Tuvok’s stratagem. No such luck, he saw. “He never finished entering his equations!”

“Will, do something!” It was Deanna. He looked back at the huge display screen nearly in a panic. His wife and child were in mortal danger. He was powerless to help them—unless he could complete a mathematical sequence that it would take most people a lifetime to figure out. Still, he turned to the panel, looking at the maze of numbers and variables controlling the shields. There had to be something he could do, anything.

Another shock shook the ship. He heard Vale’s voice. “Finish the sequence, Admiral!”

Riker focused on the figures on the screen—and suddenly saw clearly.

“I won’t,” he said, turning around to face the bridge crew. “It’s not necessary.”

Vale was flabbergasted. “What do you mean?”

Titan quaked again—but this time, Riker wasn’t swayed. “I mean there is no plasma storm.”

From his right, a plaintive call. “Daddy!”

“That’s enough.” Looking stern, he faced the terrified pair on the screen. “Whoever’s doing this, you can stop now.”

The bridge shook again, and then again, until all went silent. “As you wish,” said a gravelly male voice behind him. Then the lights went out.